Some movies are just part of your life. You assume that you know the whole thing, word for word, because you first saw it as a kid, and have seen it every few years since, coming across it on TV constantly. Superman was always there. "You've got me, who's got you?" is such a part of my family's lexicon, it may as well have been my sister and not Lois Lane who fell off that building and was caught by Supey. But after seeing the movie on Monday start to finish, I realized I didn't know it as well as I thought I did. I know the TV version cuts a lot out, but I've got the DVD so surely I know all those "extra" scenes. Wrong. If I'd seen the part where Lex Luthor hits Superman with bullets, fire, and ice, I don't remember it. I know I watched the DVD extras, but I guess I never sat and watched the whole uncut movie. Besides stuff like that, it's always interesting to see a movie as an adult that you still think of from your six-year-old mind's perspective. I really got a feel of the actual newspaper that these real people were running. How Perry White shows all the headlines to his staff, and then talks about how if they can get the scoop on this flying man, people will associate him with the Daily Planet. Like how real newspapers give nicknames to public figures, and they become known as such. So Lois goes on the date with the guy, coins the phrase "Superman," and gives White what he wants. Of course, it helps that Clark Kent works at the Planet. He's not gonna meet and date a woman from a competing paper.... And to see a New York movie after you've lived there is always fun. I knew the basics before--the movie obviously is set around (and below) Grand Central Terminal and the nearby Daily News building, but when you know the area, you see how they went to great lengths to make it consistent. Now for the pics from the showing. I got to Bryant Park around 4:45. They open the lawn at 5:00, with the movie starting at 8:25. Here's everyone along the edge of the park: 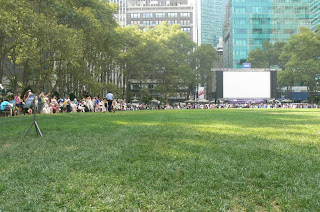 Here's a new building going up on the northwest corner: 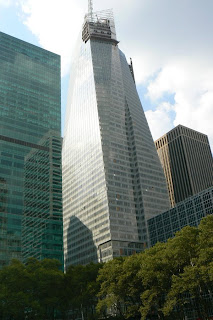 With five minutes left, the announcer's voice told everyone not to run onto the lawn. Fat chance. The guards were pacing along the perimeter...people stood there anxiously, toes on the grass, blankets in hand... 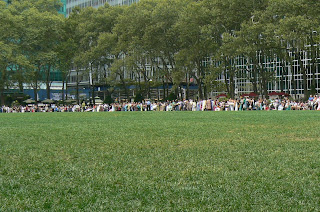 I wish I'd gotten a shot of the bull-charge when they gave the go-ahead. There were some good Jesus Beams above: 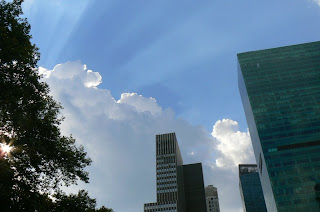 A blurry shot of everyone on the lawn as it's getting dark: 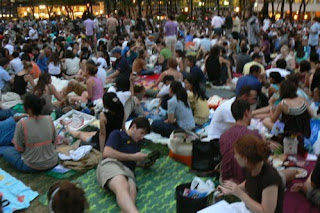 The 1.2-acre lawn becomes completely packed. This one kid came and sat on a two-square foot patch of grass next to my towel. This other dude had taken up a good ten feet of lawn with his blankets, as he was expecting more people. When the kid sat down, the space-holder guy got all mad, telling him to "find your own space, we were all here at five." As if this dick needed that much space. The blanket-less solo kid was from Liberia it turned out. I felt like I was in Alabama in the 50s or something, with none of the twenty-something white hipsters letting this African kid have even one little patch of space for himself. So I befriended the kid and let him sit on my towel since I had nobody with me anyway. And then Prick-y McTavish's friends start arriving, and they're all Euro-chicks, making the whole thing look even worse. Needless to say, the Euro-chicks did not need all that room as it turned out. And then another nearby guy who was with his girlfriend sees the Euro-chix and starts saying to the Prick, "this guy's my idol! You're about even with me in quality but you're way up on me in quantity." And he's saying this right in front of his girlfriend! Terrible job when the biggest prick in the area gets all the space, all the compliments, all while pushing those pesky black people off to the side. If I got killed in a terrorist attack along with that dick, I'd say it was worth it knowing he was getting taken out, too. And I'd laugh at him while we were dying, if time allowed. Anyway, they always play the classic HBO movie intro at Bryant Park movies, and everyone goes nuts. I remember the first time I went, seeing that one girl jumping up and down. It's gotten way bigger. I've only been to season-finales, though. Oh, and we didn't have HBO growing up, but I remember the theme from when we'd have HBO in a hotel on vacation or something. I loved it then, and I, and everyone else, love it now. Here it is: And here's the part when the Superman logo first appears: At one point, the sound cut out. It was right when a school bus is teetering on the edge of a bridge. So the whole crowd started screaming in terror to fill in the audio. Another thing I should've filmed. (Update: someone else did capture it.) You know, it's funny how it all comes full circle. When I was little, my sister and I audio taped the TV when Superman was on. This was before VCRs. And here I am video taping the screen with Superman on it 30 years later. What is it about Superman? (Answer: watch the final scene of Kill Bill Volume 2.) As I drove home late that night, I went past the two Yankee Stadiums. As I approached, I thought of how it always seems to say, on its trailer park-ish upcoming game sign, "BOSTON" and then the date. But I thought, Nah, it'll be some other team, we don't play the Yanks until the end of the month. Well, I didn't realize how late in the month it was, or that the Yanks had just left town and wouldn't be back until our series. So I was surprised to see "BOSTON AUG 26" up there. I thought, Are they skipping other games to let everyone know when the Sox are coming to the Stadium for the last time? Then I remembered it was already August 18th, and we were indeed the next team to come to town. So I got to see "BOSTON" up there for the last time in my life. So weird they're taking that place down. Click here for my past two Bryant Park movie posts: Rocky '06, Jaws '05. Why is it that every one of these movies I go to is exactly 30 years old at the time? Next year Ghostbusters turns 25. I'm hoping they choose it for their finale.

Comments:
weren't the 'red socks' changed to 'sox' at a newspaper's behest because it was headline-friendly?

superman's a great movie, but i could do without lois lane's inner monologue poem when she's flying around with superman. it's good natured and all, but why her thoughts at that moment have to rhyme one-syllable words when the rest of the movie, is, uh, prose, is slightly puzzling to me.

That Lois inner monologue I think is much shorter in the edited version--and that's a smart move. I actually heard laughter on some of her one-word rhymes. To be intentionally cheesy at times is okay (it's a superhero comic after all), but when you're trying to be serious and people laugh, that's not good.

Kim had reported on Tuesday that there was a Superman-related clue in Tuesday's X-word. I think she meant USA Today. (Someday I'll get her hooked on Shortz.) I just now got around to Monday's NYT puzzle--the day I saw Superman in Bryant Park--and there was a Lois Lane clue... you know Shortz did that on purpose.

FInished the puzzle in 11:31, while eating Cape Cod chips with my left hand. But the Monday is the easiest...

i just looked this up on wikipedia, which says "Sox was adopted by newspapers needing a headline-friendly form of Stockings, as "Stockings Win!" in large type would not fit on a page." (http://en.wikipedia.org/wiki/Red_sox#Nickname )

i don't know if this supposed to be common knowledge or not, but now i'm focusing on being annoyed at using the same phrase- 'headline-friendly' as wikipedia did. as i've had students plagiarize from there, i like to keep as much distance as possible.

The building in the 2nd pic going up on the Northwest corner of the park is the new "green" Bank of America headquarters (so-called because it apparently incorporates all sorts of energy-efficient designs and technologies). I was offered a tour of the building under construction as part of my work; I declined for some reason. Terrible Job by me.

My wife and I were introduced at our wedding reception by the Superman theme music. I talked her into that one, but she ended up agreeing that it worked. Pretty cool to have a ballroom full of people applaud you while entering the room to that fanfare.

That's cool to have Superman music at your wedding. Way better, for me anyway, than the overused Star Wars theme. (Although the "evil" music is pretty cool.)

BoA was the sponsor, and they mentioned the eco-friendly building. And though in retrospect I guess they talked about them being a "new neighbor," I didn't at the time figure out which building was the eco-one. I kind of thought it was the one next to (south of) it, which seemed to be encased in green-tinted plastic... but it makes sense it would be the newest one.