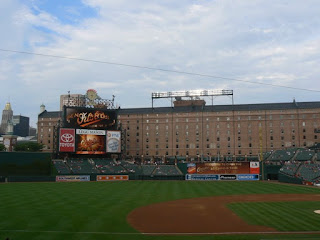 Camden Yards, our home away from home. It rained our whole way down to the Charm City, so there was no batting practice. 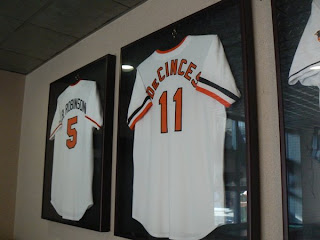 In one of the restaurants on the main concourse, a few jerseys are hanging up. Incredibly, '80s semi-star Doug DeCinces made the cut along with the HVC and Ripken. 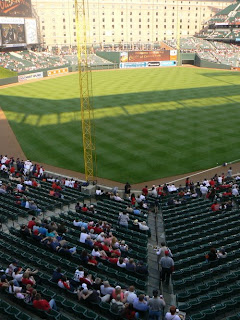 The view from up in our seats. Our bestest Philly buddy got us these, on the club level. Wait service and a great view of the whole park. 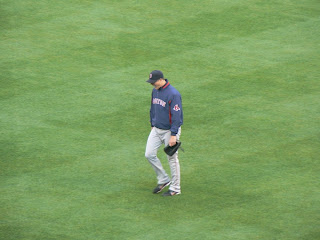 Jon Lester going to the 'pen--and popping his bubble if you look closely. 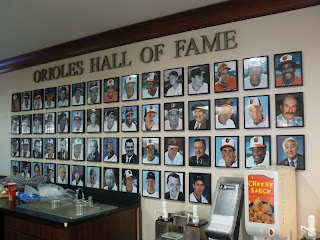 My favorite member of the Orioles' Hall of Fame? Definitely Cheese Sauce. This was on the club level. I walked all the way from one end of the park to the other up here. It's got a bunch of little rooms to hang out in on the outside, facing out, and then all the party suites on the field side. (Our seats were the normal seats in front of the party suites.) And all along, you've got the O's team picture from every year. 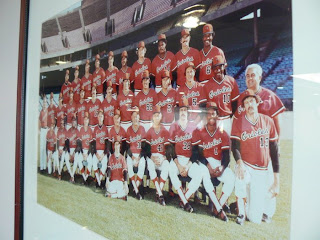 Here are the 1976 Orioles, with their black hats with orange front panels, and orange shirts. 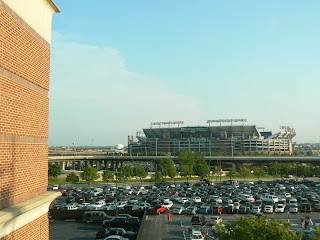 Looking out at the football stadium from club level. 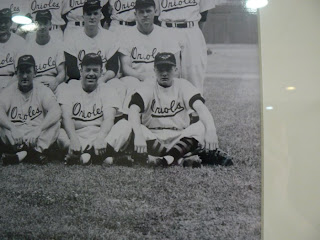 The 1954 Orioles--a year after moving from St. Louis. They finished 57.5 games out, but they had great socks. And check out the O in Orioles. 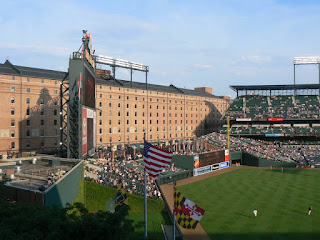 View of the warehouse and scoreboard (and revamped right field board) from out on the far left field edge of club level. 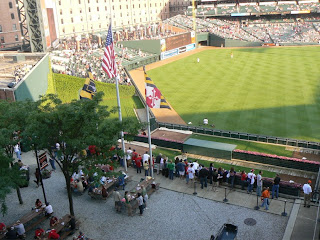 From here you can see the location of my famous (in my mind) near-capture of an Ortiz dong. This section is now closed off unless you have a ticket for it. 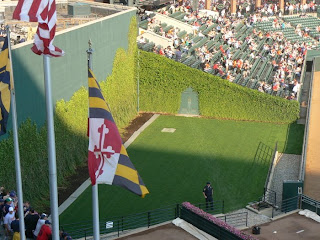 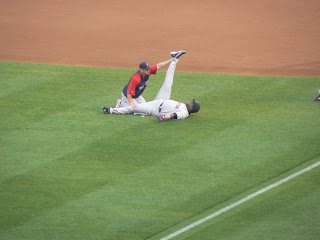 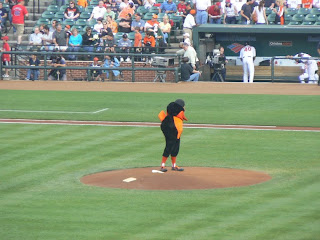 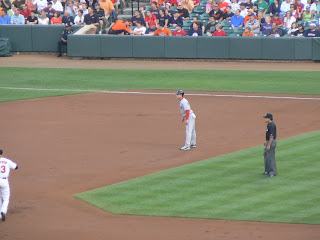 Jacoby in a weird straight-legged position. 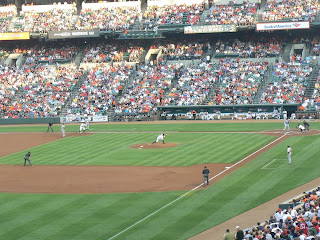 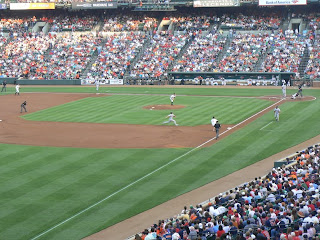 Jacoby's last step before sliding into third with a stolen base. 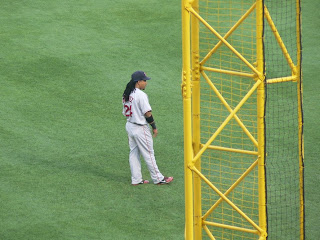 Manny on the proverbial day of his daughter's wedding. 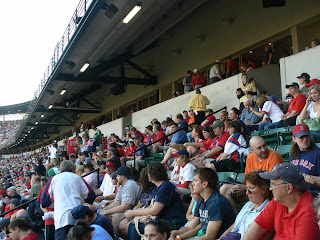 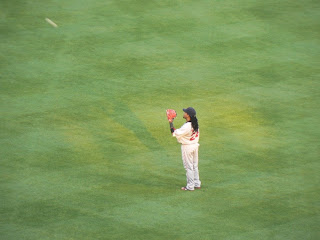 A little spot of sunlight gave Manny a shadow. 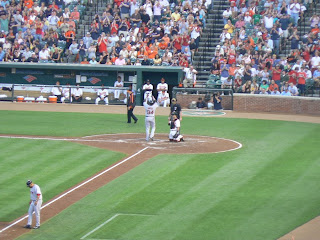 Papi crosses the plate, completing back-to-back dongs by he and Dustin. I've seen them do that twice now this season. 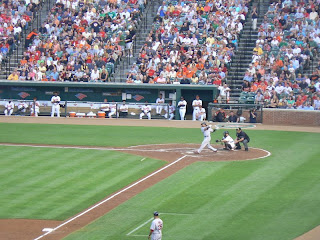 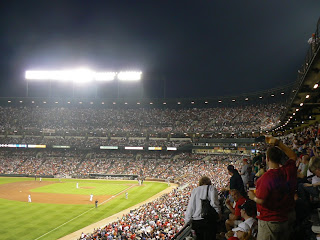 Now it is night. 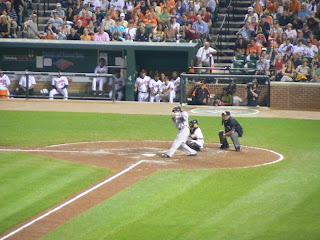 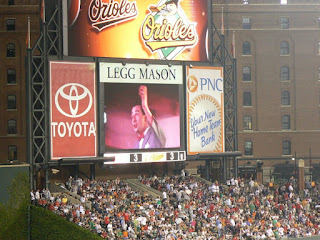 Pee-Wee on the board! 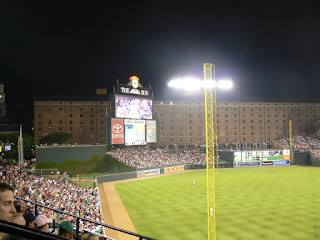 The outfield at night, with Manny in the foul pole. 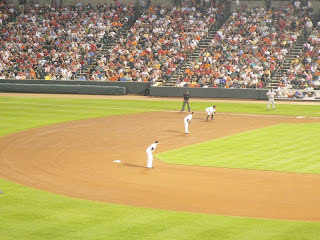 With Papi up and Manny on deck about to hit his 500th home run, the infield was half in, yet shifted. 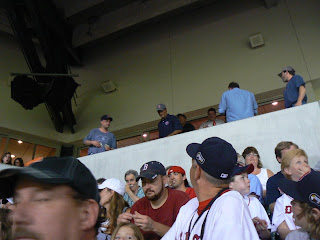 So after Manny's 500th (click here for my video), in the commotion, a lot of people started looking behind us. We turned around to see Doug Flutie in the party box! And they seemed to be making bets. You can see money in his buddy's hand in this picture. Later, on a Lugo walk, they all whooped it up, and I turned around to see everyone handing Flutie money! A BC guy involved in gambling, that sounds normal--but betting on Lugo? Come on. Talk about a hail mary. But Lugo came through for him. 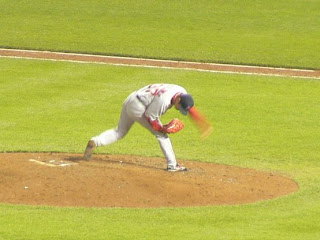 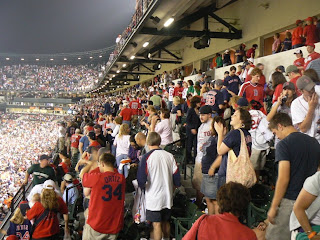 And the home crowd celebrates after the Red Sox win. 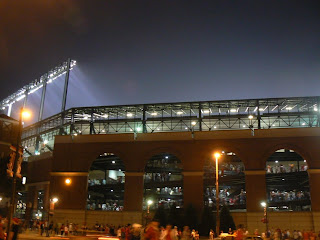 Outside Camden Yards after the game. What an awesome night. There was an Oriole couple behind us, and the guy kept ripping Manny. He even said that "any Red Sox fan can tell you he's the weak link in the outfield." Then he came out with this gem: "Boston would be better off if they'd just DH Manny." At that point I said very loudly that maybe that way we'd even win a World Series or two. And then the guy next to him pointed out to him that David Ortiz is our DH. So it was so incredibly sweet that Manny hit his 500th and that dude just had to sit there while his own park went completely nuts.

We got the win Sunday, too, so tonight we go for the sweep with Wakefield.

Thanks for the great pics. The fantabulous one of Okajima, in particular.