The Boston representatives of the junior circuit found the Pacific northwest the perfect place to extricate themselves from the logjam they so mired in. King County, Washington, was originally named after the vice president under New Hampshire's own Franklin Pierce. Tonight, Seattle's own King would too play second fiddle to the New England men.

Hurler Hernandez was worthy of the praise he received from the Memorial Day gathering in the form of holler and hand-clap. But it was the Boston road warriors who sung the tune of Let's Go, Red Sox, and ultimately saw the royal righty relent. The batsmen of the Rosy-hued Podiatric Underclothesmen were slow afoot for six frames, save for "Big Papi," who cleared the far fence in fourth, though his trot came without accompaniment. 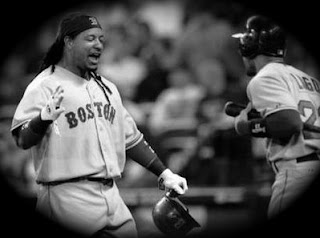 In number six, Varitek was burglarized, as the camouflage-clad catcher clocked one high and deep and fit to cause chaos. But Ichiro made good on his promise to the Far West Faithful and fetched it, front-to-the-fence, before falling to the floor.

It was the eighth when the flood gates opened. Now in a one-all stalemate, the Mayor of Red Sox City started with a quarter dong. Lugo attempted to give his out away at no charge, in exchange for Casey obtaining second. But the Compasses declined the offer, putting Casey out to pasture, and allowing Lugo to take his place at the initial sack. Young Ellsbury achieved Lugo's goal to cause advancement, though with two outs, the desired effect is all but lost. That is, unless your chaser chases the man home regardless. Sophomore Pedroia did so with a wall-hopping twi-bagger. King Felix now faced the "Big Papi," but did so without challenge. A free four was given. The Seamen supporters shielded their eyes, as the Amazing Manny stood in. A taught rope to the off-field that looked for a moment as if it might be the 499th round-tripper of the Great Career snarfed the wall, plating Pedroia, and putting Big Papi on third, as Ramirez held with one. The King remained on the mountain, but couldn't retire Lowell, whose grounder put the inning's third tally on the board. Following a slow roller by Drew that rendered all glovemen helpless, Captain Varitek was accidentally allowed four wild ones, demanding another Boston man to cross the threshhold.

Finally, the scoring was full up. 5-1 felt like 50-1 for the Bostons. After new meat Colon threw in 7 fruitful frames, Okaji and the "Wild Thing" locked up. The latter's own mis-toss caused a brief scare, but when the 27th Marine Corps-man went down, Boston was five, and Seattle just three. The Red Sox' streak of 14 encounters with hosts as victors came to a close, and were the Bostons and their "rooters" ever thankful.