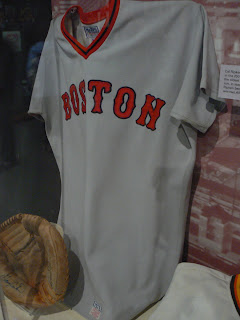 Kim & I went to the Hall of Fame this weekend. I'll post pictures later today. But for now, here's one pic that may prove one of my theories. I had concluded that the '75/some of '76 bicentennial patch was only worn at home. I looked everywhere for any pic showing a Red Sox player in either year (not including post-season, when they didn't wear the patch at all) wearing the patch on the road. No luck. But at the Hall, I saw a '70s road jersey, and went immediately over to it. It was from Fisk (or possibly Yaz, but I think Fisk), and it was labeled as a jersey from 1975. You'll notice there is no patch. I looked very closely at it, and there was no sign of a removed patch, either. I guess this could be a post-season jersey, but it didn't say it was. And that would be an important fact to leave out.

So, I stand by my theory. Those throwback jerseys they sell--incorrect.

I've also further proven this (with new research I just thought to do now) by the fact that the team was seen wearing just the Yawkey armband on the road in 1976 and then later wearing the patch and the armband together at home. That would mean they just weren't wearing the patch on the road at all. If you look at the Fisk and Evans cards from '77 (in the post linked above), they're from Yankee Stadium. Both players have the armband, and Yawkey died July 9th. So this has to be the late-July or September series at Yankee Stadium in 1976. The September series is out, as those were night games. So this is the July series. The play with Fisk and Randolph has to be from July 24th, a Saturday afternoon game, where Rivers bunts home Randolph. So the Evans shot would be from that day or the following day. Now, we've also got Bill Lee at home, with the patch and the armband on. The only days the Sox played at home after Yawkey's death but before the Yankees series were 7/9/76, and the next two days. Bill Lee was not on the mound at all over those three days. Which means the armband/patch pic of him was from AFTER that Yankees series, in which the team wore the armband but not the patch. Therefore, they just weren't wearing the patch on the road uniforms at all. At least not in '76.