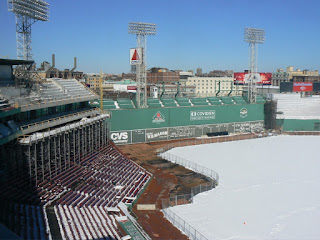 My lifelong dream (are you keeping track of them?) was to see Fenway Park covered in snow. In person. This winter, we'd matched the snowfall total of last year before Boxing Day. But I never got to Fenway to do the tour. And then January was pretty dry. The last few weeks it snowed seemingly every day, but it never left much on the ground. But the other day we had a nice, fluffy snowfall, and the weekend followed right behind. So Kim and I paid the 12 bucks to go to Fenway Park in February. 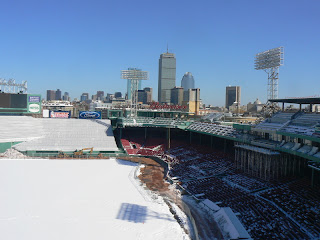 I'd been on the tour once before, in November 2003. So I know what the deal is, but, again, I was just there for the snow, and to see this year's improvements in progress. These shots are from up in the press area. We got a not-too-cold, cloudless day. 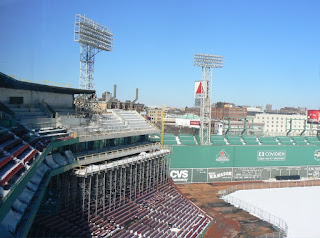 Here's a close-up of the new seats along the third base line. 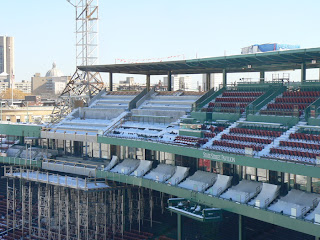 And the new seats on the first base line. All these are going up where those "party boxes" they put in for the '99 All-Star Game were. (They promptly took them to the dump after the crane brought them down. Everyone always makes fun of the ownership for trying to sell all these pieces of Fenway-- Where was the praise for not cutting those things up into 10,000 parts and selling them for 100 dollars per square foot? Anyway, I'm totally fine with the owners recognizing that some of us like to collect weird stuff.... Of course, I wouldn't mind if they just gave the stuff to us.) 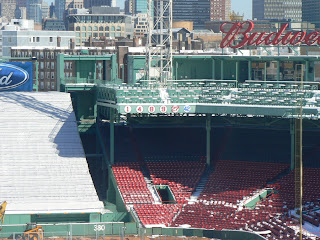 Looking out at the right field grandstand. 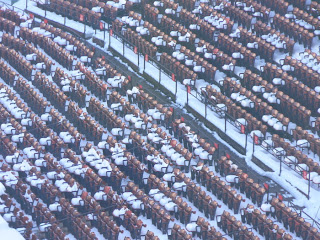 One of the many shots you'll see of snowy seats. I love this stuff. Look how you can see the snow build-up on the seats in the down position. 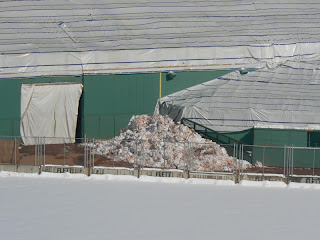 It looks like they plowed the warning track. And the triangle gets the burgundy-twinged pile. As you know, the Coke bottles came down a few weeks back. I don't know what's replacing them, but nothing's there yet. 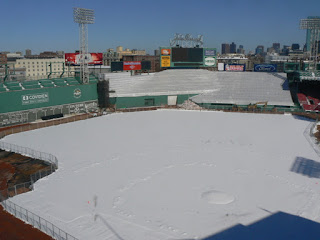 The white field. The infield's covered anyway, but I started to think maybe the entire field was covered anyway. With a white tarp. Meaning the field would look like this even without snow. So, let's just pretend the field was completely uncovered, and then snow fell on it and turned it white. Except for the warning track. The bleachers are definitely covered with a white tarp, as they're re-doing all those seats. I can't wait to see my new bleacher seat in '08. (Oh, I also found out that they won't ever be re-doing the grandstand seats, partially because they'd have to follow the fire codes--they're currently grandfathered, so they don't have to follow them--and would lose 3,000 seats by making each seats eight inches wider.) The new seating area jutting out in front of the Cask sign, and this horrible sign of a headless Sox player. 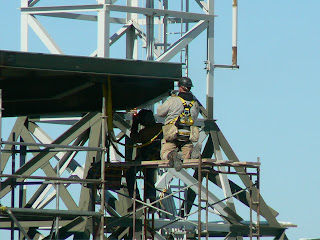 Workers were welding away as the tour guide talked about curses and championships to smatterings of laughter and applause. 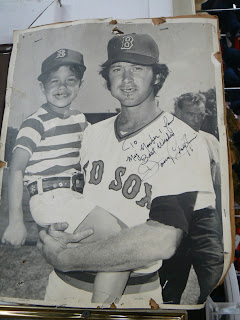 Intermission! This picture is in the Yawkey Way Store, which is where you go to buy your tour tickets. If you're exiting the main doors, it's just to the right of the doors, facing you. I wonder who this kid is with Doug Griffin. He must be related to the owners of the store or something. I figure the pic is from spring training '77, but that's neither here nor there. Okay, back to the action. From this high, you get the odd effect of cars driving on top of the bleachers. Look to the bottom right of the Ford sign. That car's going over the Mass Pike on [Unnamed] Road. Seriously, what is that road called? It's basically a really long on and off ramp for Storrow Drive. Or maybe the Charlesgate twins, East and West, own the air-naming rights. The current seats, and the new seats moving in next store. (Note that some seats have been torn out, and there's a roof-deck style table and chairs visible.) 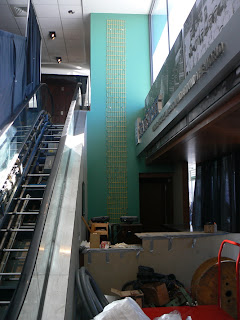 Due to construction, most of the tour was in the upper regions behind home plate. Now we're going down to the next level, and you can see the original pole that Fisk hit up on the wall. 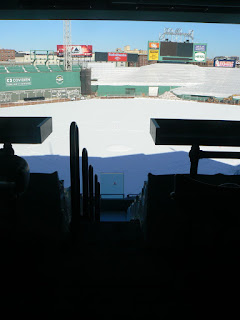 Looking out from the EMC level (or whatever, I can never keep track of the level names) at the field. That orange cone is on home plate. 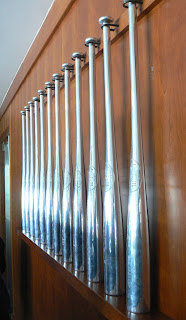 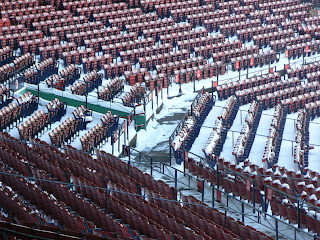 The seats behind home plate. 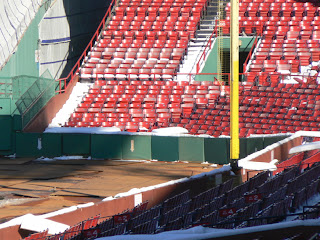 The right field fence looks odd to me. The panels are different colors and look like they're just leaning up on the real fence, there are arrows on there, it just looks odd. At this point we're sitting in the grandstand between home and first, the last stop on the tour. Snow on the seats around Canvas Alley. 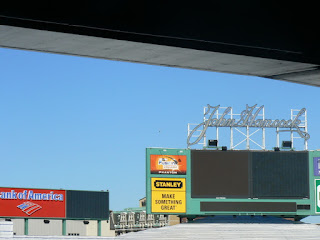 The blank scoreboard. But the real reason I took this was that the Fenway Hawk was flying around. I've done the zooming for you below: 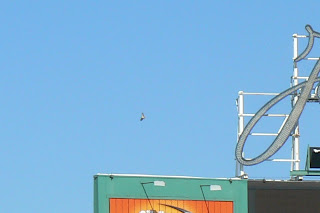 There it is. I also got it sitting on top of the a light tower. That hawk just rules that area. 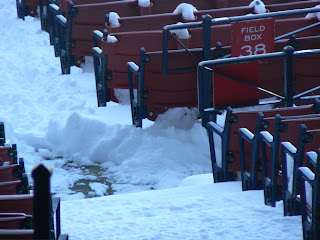 Snow in the aisle. 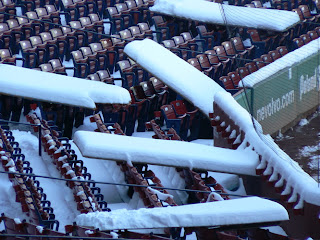 Snowy seats, many covered by boards, right behind the plate. 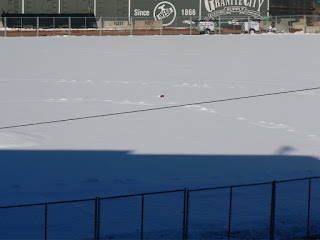 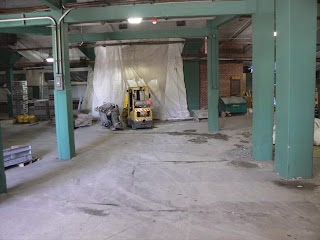 On the way out. This is underneath the grandstand at home plate. This is what you see when you enter Gate D. 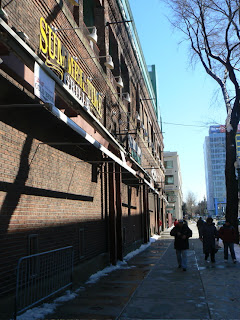 On Yawkey Way. The championship flags are hibernating. In the meantime, the 2007 AL and World Champs flags are up over near the Beer Works.

When the tour started, the guide asked how many people had never been to Fenway Park before. I figured, February, probably lots of locals, surely everyone's been a bunch of times. But no. Almost every single person raised their hand. Out of maybe 50 people. I waited for the next question, "Has anyone been here a million times?", but it never came. So, the team should get the message: "We just can't either afford tickets or figure out how to get cheap seats, so the only way we'll come here is for 12 bucks without a game even going on. And no eight dollar beers to buy." Granted, as I have proven, it's doable to get cheap tickets, and lots of them. But people with kids wouldn't have time to do what it takes to get tickets even if they knew what that entailed. So instead of teaming up with the internet scalpers, maybe baseball teams should try to put an end to them, which will free up so many more tickets to the common fan.

I've taken the tour twice -- the last time we went down into the dugout and there was a small tin of chewing tobacco on the railing above the bench. I grabbed it. Empty but now sitting on my book shelf -- with my tour ticket inside.

The light towers look so nice without that Coke shit on them -- please leave it that way!!!!!

Glad you enjoyed. They don't even give you a ticket now, just a wristband.

I was wondering if they'll replace the bottles with a single can that goes all the way around....

Enjoyed the show - thanks!
I've only been in Fenway once, and it was 1 damn week BEFORE opening day.
We used to do the big N.E. Flower Show every year and it always ended a week before baseball started. I always said that 1 year we would make enough money to stay a whole extra week and come to a game. We never did.
The last year we were there we came down to Fenway as we were leaving town. I didn't even ask directions, I'd read so much about it and followed the team for so long I just "felt" my way right down into that part of town and looked for the street names that I knew so well.
We parked right beside the wall behind the 3rd baseline (I don't think that's Yawkey, but can't remember for sure what it is). The gates were open with all the construction going on, so my son and I stuck screwdrivers in our back pockets and walked in like we belonged there. Walked around for about 10 - 15 minutes then went out into the LF seats and sat watching the crews work on the infield and taking in the sights.
After about 5 minutes of that I noticed one of them looking at us a little curiously, so we headed on out.
Just being there was great, but I can't wait to see a game there. We're trying to get tickets for a pair of games sometime in August, but as you point out, that can be prohibitively expensive for a couple of working guys who would also have to travel. I don't know what baseball gets out of the scalpers/re-sellers but it sure seems they would get more out of having their fan base expanded to a bigger portion of the population than just the ones with a fair amount of disposable income, or the ones who have the know-how and the time to put in that you have.
Oh well, maybe this year....

"I just "felt" my way right down into that part of town and looked for the street names that I knew so well."

You should seriously get an award for this. It's hard enough to get somewhere in Boston even if you have detailed directions in front of you. Nice job getting inside, too. I have also done the "walk right in" method, but that was over 10 years ago.