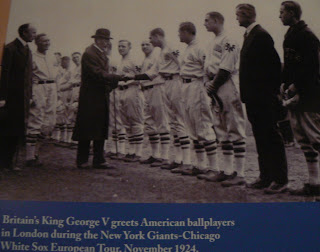 We took a nice frigid drive out to Cooperstown, New York on Saturday. That part of upstate New York is so beautiful--would be worth going to even if the Baseball Hall of Fame wasn't there. But it is. Click my pics to enlarge. Above: Interesting how the Giants put their American flags right on their chest for their international games. That area was blank anyway, as their logo only appeared on their sleeves. 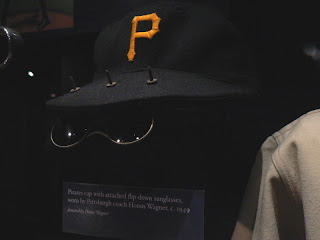 Check out this crazy way of attaching shades to your hat. 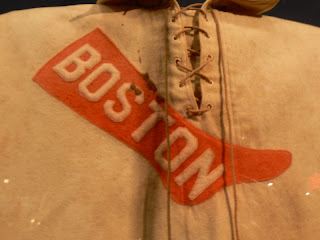 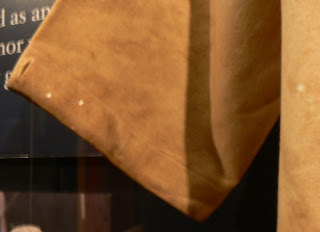 On Cy's sleeve, I noticed what looked like button holes. I just checked Dressed to the Nines, and found this out:

First introduced in the 1890s, detachable sleeves were popular throughout the first few decades of the 20th century. Buttons on the sleeve extensions attached to button holes on the jersey, eliminating the need for multiple jerseys of different sleeve lengths and allowing players to dress comfortably, whatever the weather conditions. 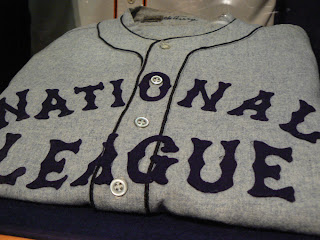 Jersey from the first All-Star Game. 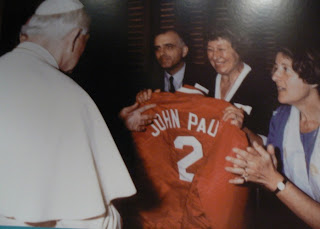 The ultimate Full Name on Back. 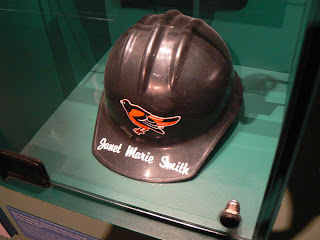 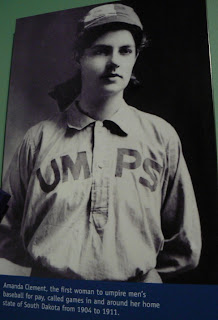 Wow, an umpire uniform with "UMPS" on it. 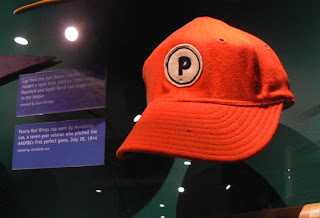 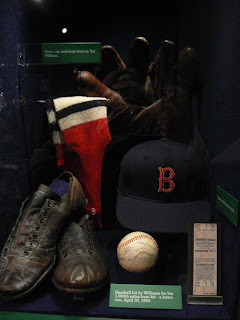 A bunch of Ted Williams stuff. Note the little 9 sewn into the bottom of the stirrup. 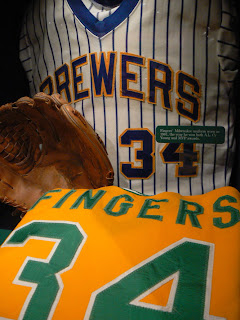 I love the look of these two Rollie Fingers jerseys together. 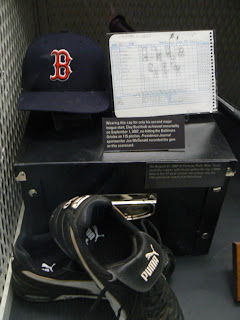 Clay Buchholz' hat from his no-hitter and Mike Timlin's spikes from his 1,000th appearance. 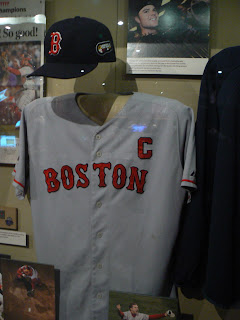 We were going to take this trip in the summer, had Jim Rice made it in this year. Instead, we made it a winter pilgrimage to see the 2007 World Series display. In fact, I wonder if that's yet another part of the grand conspiracy called "keep Rice out." They knew Sox fans would come to Cooperstown this year anyway, so they made it so Rice goes in next year, to get everyone coming back again. Above, Varitek's hat and jersey from the WS. 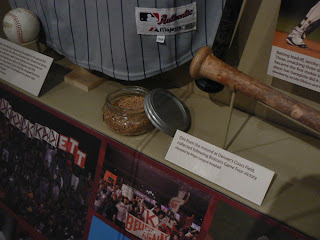 Some dirt from the mound at Coors Field. My girlfriend and I have also added to our collection of "pictures of us in front of Red Sox World Championship displays at the Hall of Fame." 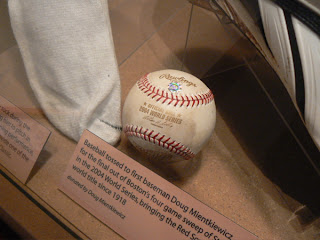 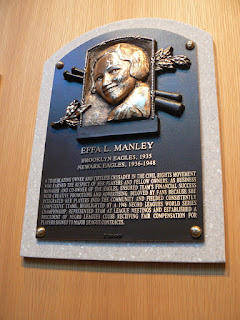 The first woman inducted into the Hall, Effa Manley. 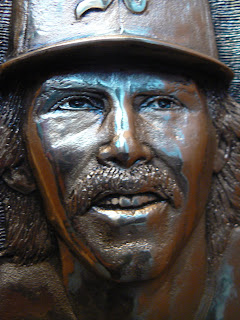 Dennis Eckersley's plaque. Warning: Clicking this photo may cause young children to cry. 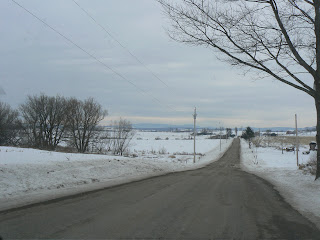 It was a fun, quick trip. Our B&B was great and we ate at a haunted castle.

Comments:
Great pics! I've never been there. We tried to go last summer but it didn't work out. I love upstate NY, too. Would love a vacation home in Saratoga Springs when I'm rich. : )

Thanks. Yeah, it's good stuff.

So, I always thought it was PCs that made my pics look dark. But right now I'm on an eMac at work, and they are dark on it, too. So, just so you all know, if you look at these with a MacBook or IBook or whatever, they're totally fine. That Pirates hat--I even brightened that one up just in case, and on this computer it looks almost pitch black. Maybe I'll further brighten my pics in the future.

Then again, the lighting in the Hall of Fame is horrible, on top of the fact that everything is behind glass....

I haven't been to Cooperstown since October 2002. I have been dying to go back. We used to go at least once a year (just a good day trip from where I lived in Connecticut), and often more than that. I love that whole Cooperstown area. I would love to get back there while the 2007 World Series displays are still up.