The Oil Can, The Ged Man, And The Space Man

We drove down to Windsor Locks in my home state of Connecticut (albeit the northern, Chicago-accented portion) tonight to see possibly my three favorite Red Sox of all-time. I'm a follower in the Rich Gedman cult, as evidenced by the fact that the collage above, around my blog logo, consists entirely of Gedman cards. I bat and politick lefty, so I'm an admirer of Bill "Don't Call Me Spaceman" Lee--I'm possibly his biggest fan who doesn't do drugs. And I live and breathe, so I love Dennis "Oil Can" Boyd.

So when I heard that those three guys were specifically appearing at a dinner within, say, eight--no, ten hours of where I live (in this case 1.5 hours), I knew I couldn't pass up the opportunity. And I owe it all to John Quinn, who tipped me off to the gathering. Please read his blog, the Mighty Quinn Media Machine, daily. My mom and dad drove up from the Havens for the event, too. 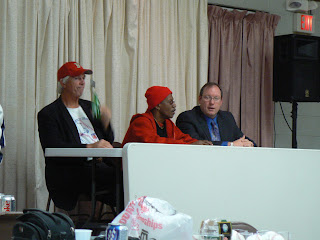 First we were allowed to go up and get a group photo taken. My mom said "Viva Cuba" to Lee, who thought about it a stoned second and replied, "'Yankee go home,' they say as you round third." (Lee loves Cubans, and says they love us, which you know if you've read his books or seen Spaceman: A Baseball Odyssey. He only said that because it's a play on--eh, forget it. Anyway, I gotta get to Cuba....) 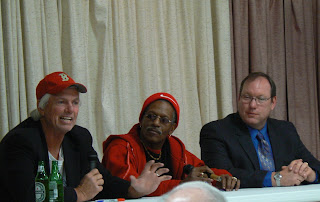 Then we each went up individually for autographs. I went to Lee and gave him my ball and told him I was a fan, and that I have similar views to his on things like the Yankees and the Bush administration. Having said that, I told him to write whatever he wanted on the ball. He produced this: 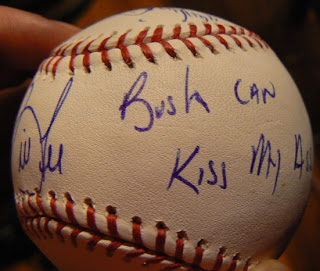 How cool is that? That was my first time meeting Lee. Then I went to the Can, and asked him to add his name to the ball. He was friendly as usual. I'd met him before, at Autograph Alley at Fenway, and told him I felt he was screwed out of starting the '86 All-Star Game. He said, "damn straight." 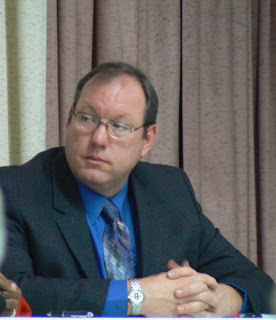 Then it was on the holy grail, Rich Gedman. I asked for him to add his name to my ball, but I also brought out the heavy artillery. The classic pic of me with him in the background from 1989. (Full gallery from game here.) He signed it for me, but not before turning to Can, showing him the pic, and reminiscing about Randy Kutcher. (This was my second time meeting Geddy--the first was at historic Waconah Park.) 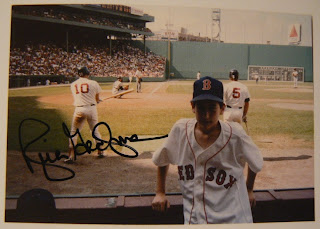 My girlfriend had Lee write "Yankees Suck" on a mini-bat, and also got the two other guys' autographs on there, too. Then we all ate a mildly delicious buffet-style dinner and waited to hear the three dudes speak. I couldn't wait to hear Lee, and he was really on tonight. Then again, he always is. After the "host" talked for a few minutes in the "talk about myself and when I ask the guests of honor questions, don't bother to even give them the microphone" style, Lee was handed a mic. And that host did not speak for the rest of the night. Lee just took over. The scene above was right at the beginning, and it was mainly him cracking himself and everyone else up from that point on. 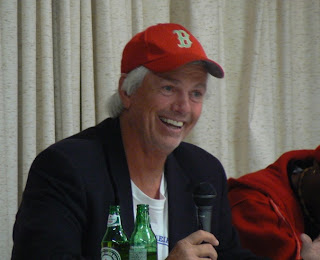 He touched on lots of topics, often making the Can and Rich want to hide under the table. Geddy and Boyd did get some very eloquent speeches in, though, in between Lee rants. Gedman was the perfect straight man to those two. But it was basically the Bill Lee show. And that was fine with me.

Comments:
Jere, sounds like a magic night...the Spaceman looks great, with the requisite beers by his side. I'm glad you have those precious autographs. I was a Geddy fan, too, and also a Can fan (rhyme NOT intended!).

So, here's a real problem -
You get Oil Can, one of my all-time favs, and I get Bobby Richardson. Not that Richardson wasn't a great player and hopefully he will be entertaining, but jeez - a Damn Yankee!
Life in the boonies.....
Our local single A team, now the Winston-Salem Warthogs - a White Sox affiliate, hosts aHot Stove Banquet every year. I attend whenever I can. It's coming up in about 2 weeks.
On another front -
Don Cardwell passed away Monday. He was from Clemmons, the same small burb of Winston-Salem I'm in.
One good thing about small town life is that I knew his son very well. He is the same age as me, and in Clemmons when I grew up, you knew every other kid your age because there was just 1 class for each grade at the elementary school.
We got to gather at the auditorium to watch the 69 series on a TV set on the stage, hoping to see him pitch. We didn't. He only pitched in game 1, which was a weekend game. But the 'Mazing Mets won the series and we all had a big do when he came home. I'm writing a little piece about him and that series on my blog, and I might even finish it this week.
But don't be surprised if I don't.

Lee is one of my all time favorites too! Loved the video and the autograph about Bush made my day.

Sweet! Glad you liked that.

Sosock--I missed your comment somehow this morning, that's why I didn't post it until now. Nice story on Don.

Nice to hear that you went to School With Card's Son;

It's the '86 "Cocaine Crowd" who displease me to no end, what with "Fans" who defected to Yankee Stadium in '96;

The Irony of Don Cardwell of "Clemmons", NC;

& to Jere, I being a Past Grand Knight of a Knights Of Columbus Council in East Glendale in Queens, I'd've Welcomed "The Spaceman", what with all the quirky characters I've known in The Order over The Years;

& my 1500th Post is up, with you mentioned PROMINENTLY.