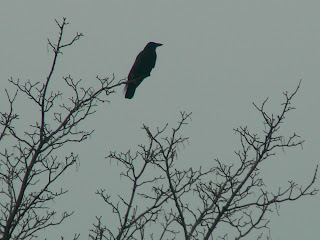 A crow across the street, between snowstorms. Click all to enlarge. 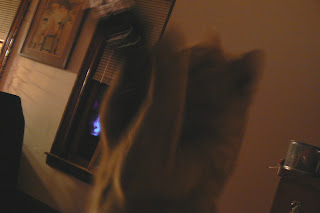 Amazing Larry up on his hind legs. In the background, Ace Frehley pulls a "Three Men and a Baby boy" in the window reflection. 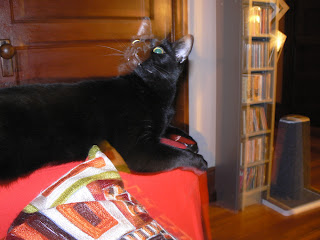 Danzig with the phantom head-turn. 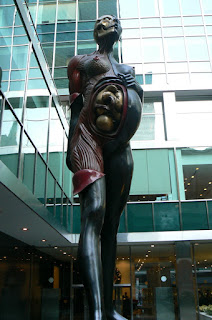 On New Year's Eve, we went to New York. We planned on doing Times Square, which I did thrice in the 90s, but it was so damn crowded a good seven hours before midnight, we said Screw it. So after dinner we just walked through a deserted Central Park. Very cool. And the weather was fine, a big reason why so many people came out, I'm sure. Above, a crazy statue somewhere in Midtown that was supposed to be a modern day Virgin Mary or something. We also randomly passed by that section of the Berlin Wall, which I first saw when my friend Jason visited me in New York last year. 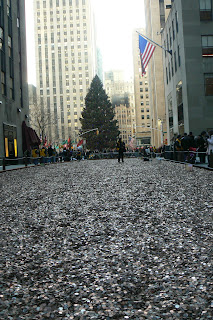 At Rockefeller Center, the world's largest "Give-a-Penny/Take-a-Penny." Oh, the first thing we noticed when we got to the city was the new NYC Taxi logo. They've stolen the Boston T logo! I looked it up, and a chic design company called Smart Design "came up" with this logo. My theory is that Steinbrenner was involved in the process, and continued his "try to be like Boston so he can be a winner, too" theory. (I do kind of like how they use a version of the checkerboard design to evoke the old checkered cabs. But still, terrible job.) 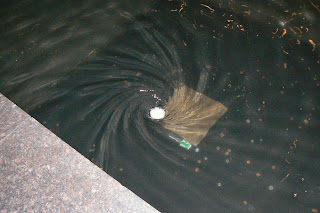 In a fountain on 6th Ave, a whirlpool. (Too bad about the water bottle.) 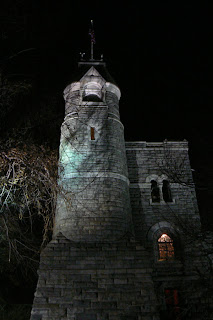 Belvedere Castle in Central Park. We drove back to my parents' house in New Haven and watched the ball drop between Twilight Zone episodes. Incredibly, A-Rod chose to once again thrust his face into the spotlight. If it wasn't official before, it is now: He is the biggest phony there is. "Oh, I just happened to be right near this spot where the whole world is watching at this exact moment. And gosh do my loving wife and I love New York." Aren't you proud to be a World Champion Red Sox fan? And if you're a Yankee fan, don't you wanna just pistol-whip the guy at this point?

And about the people in Times Square: When someone hands you a funny hat plastered with a huge corporate logo, if you must wear it, why not at least turn it around? Do you think they paid those people to be billboards? Finally, back on the Connecticut shore earlier today, the view of Long Island Sound from above a seagull.

And now for my annual talk about the Twilight Zone. I actually got Season One on DVD for Xmas, which is awesome, but we've been watching the marathon on the Sci-Fi channel like crazy, as is the New Year's tradition. My tied-with-Midnight Sun-for-favorite episode was just on. The Hitch-hiker. For some reason, I never looked into the history of the actress who played Nan Adams. Turns out she (Inger Stevens) committed suicide about a decade after the episode. She had a pretty messed-up life. My favorite line from her bio: "and once she leaped from a crash-landing jet liner minutes before it exploded."

Comments:
My TV remote has gotten quite a workout the last 24 hours. I knew you'd be watching TZ this day as well. I've been watching The Twilight Zone and The Honeymooners marathons, and they are both a joy. "Midnight Sun" is a great episode, with a great twist of an ending. I'm actually putting together my "Top 10 Twilight Zone" list, and it will be up in a few weeks. I'm not sure what I'll put #1, but "A Stop at Willoughby" is an all-time favorite, and "Obsolete Man" is another, and that will be on later tonight.

Love Willoughby! It's cool how you get to hear the Metro-North stops.

Thanks for the tip on Obsolete. Will tune in in a few mins.

In NYC for 18 New Year's Eves and never thought seriously about standing in Times Square. I think the idiot factor and trying to get home after it was over would drive me nuts.

And yes, people are quite happy to be walking commercials for free.