Evel Knievel is dead. If you're really young, all you need to know is he was the type of icon only a pre-internet world could produce. And he tried to jump canyons on a motorcycle and stuff. So.... 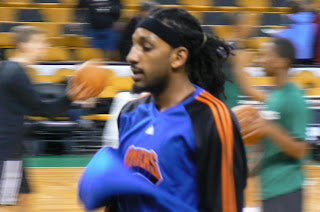 Went to the C's game on Thursday with Kim. I've always hated the Knicks, so I actually had someone to root for. Above, Renaldo Balkman. Can you believe there's a guy with a name so close to that of former NBA star Rolando Blackmon? 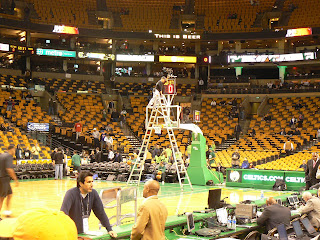 It was a TNT game, which, I think, is why this guy was putting a camera or something up there. 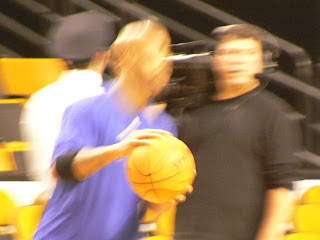 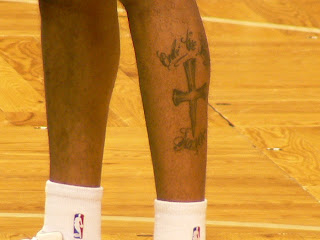 A tattoo on some guy's leg. A Celtic, I think. 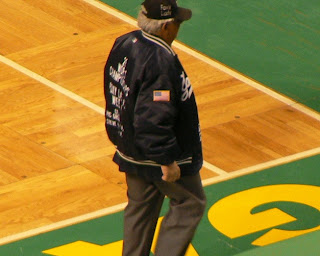 Up in our balcony seats now. We'd earlier walked past this dude, who I immediately figured must be that Frank guy, the Yankee fan who calls EEI or whatever. A Yankee jacket that said "WEEI #1" among other ridiculous slogans gave him away. Then I look down and the jackass is on the court. Terrible. 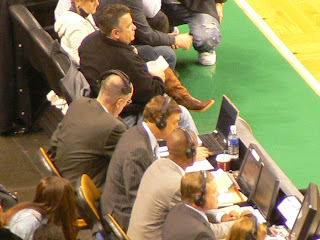 The back-biter himself, Marv Albert. 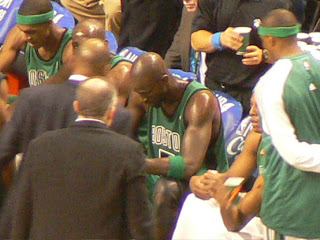 Garnett on the bench. I love my zoom. I just think this shot is a hundred times cooler when you remember that it was taken from just about as far away as you can get from the subject without leaving the building. Below is what it looks like when I zoomed out. 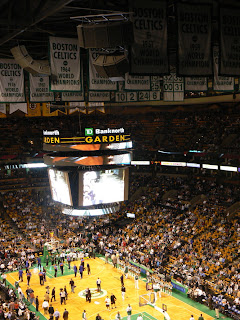 Okay, back to captions below pictures, starting with the next one: 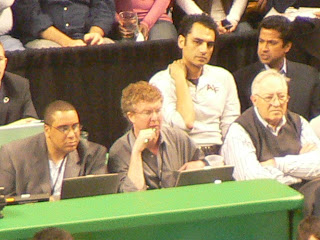 Shaughnessey was there. I've seen Bob Ryan in this seat, so it must be the Globe seat. 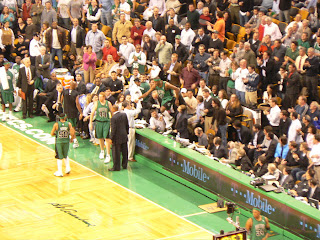 This dude dove into the crowd, and is now climbing back onto the court. 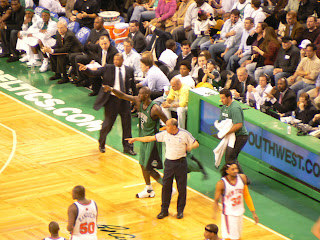 KG, Doc, and the ref do a choreographed dance. One of the best things about Celtics games is Gino. They show this old American Bandstand footage on the scoreboard, and this one ultra-70s dude has a shirt on that just says "GINO." It's incredible. Everyone goes nuts whenever Gino appears. Never gets old, I tells ya. The "noise meter" did, back around the time Gino originally did his dance. 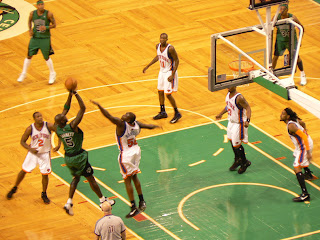 The KG veteran shoots. So, this game was awesome. I figured the Knicks would have trouble scoring. I predicted they'd score less than 15 points in the first quarter. They got 16. But they got exactly 15 in the second. They topped themselves yet again in the third--a whopping ten points. I really wanted to see them go down by 50. Finally, the Celts did it. Then I wanted 60, but it wasn't to be. It was 48 with 26 seconds left. The Celts had the ball, and just dribbled out the 24-second clock, which was a classy move. But screw class, they should've taken a final shot and gone for the 50-point win! Instead, the Knicks took one final shot at the buzzer, and it fell from like 30 feet way, making it a mere 45-point difference, and saving the Knicks from setting some records they didn't want to set. 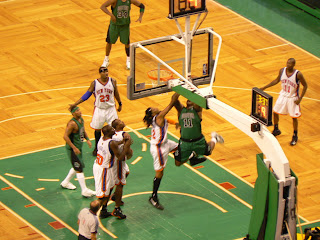 Big Baby, up in the air.

Pierce is big on this move: the stand really far away from everyone else while free throws are being attempted. 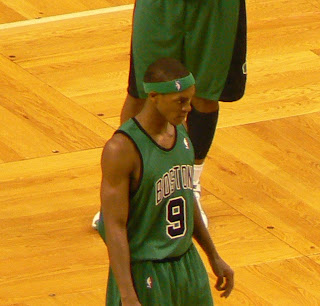 I got a close-up of Rondo's upside-down headband. 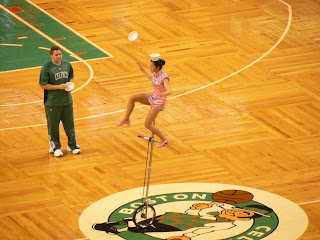 This woman was impressive. At halftime, she rolled out onto the court, balanced bowls on the top of her foot, and kicked them up in the air, catching him on her head. She'd add more bowls each time, and ended up with a pretty big stack. 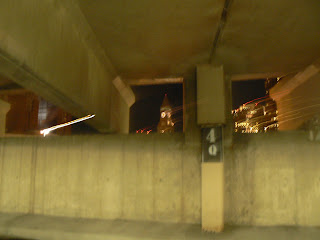 That Boston building that's always on the opening of the local news, from the parking garage.

Moving on to commercial criticism:

1. You know how politicians have started saying "I'm _______ and I approve this message"? Well, that's lame enough. But recently I've noticed a John McCain ad where you see him sitting there, the whole time, talking to the camera. From this, were I to, for some reason, wonder whether or not he approves what's coming out of his own mouth, I'd be sure that he did. Because he's saying it. Yet he still feels the need to add the "approval disclaimer" at the end. What the hell? Does he think we're watching him speak and thinking, "John McCain would never approve of this!"?

2. Can someone please tell the car companies that we just want to drive the cars, not have sex with them? AJM's wife, maybe you could talk to somebody at ad-makin' HQ?

3. When you're trying to figure out who to kill when watching a commercial, do you usually go with the actor who says the offending line? Or the owner of the corporation being advertised? Maybe the director of the ad? The writer? Whatever the case, someone needs to die. Because of this line, from the latest Taco Bell travesty: "Whatcha eatin' on?" I don't know what's worse, though, that line, or the acting by the other 18-35 year old boob in the ad. There's such a "Roman Empire" feel to some of these ads. By that I mean they're trying to convey that we as Americans have it so easy, and are so complacent, that we're completely oblivious to some impending doom. If my theory is correct, I'll bid you all adieu now, as the internet will be the first thing to go. But if some of us survive, check me out on whatever pirate internet arises from the chaos. Alias: The Beekeeper.

Comments:
It just hit me: Last night, less than a day from hearing of Knievel's death, I saw that Simpsons where the Evel-esque stuntman tries to ride his bike over the shark/gator tank, and then Bart wants to jump Springfield Gorge. Weird.

Also, it looks like Blogger is doing that thing where when you click to enlarge, it makes you download the pic instead of just opening it in a new window. I hate this more than the Taco Bell commercial. The "red seat" pic I did a few days ago was the last to work in the "classic" style. Then they started being stupid. Or maybe it's my computer.

I love your zoom, too (Did you approve those photos?), but don't they have cheerleaders at Celtics games? Or were you afraid Kim might say, "Whatcha focusin' on?"

1. It is actually a recent election law that requires them to say that. I think it is dumb too.

3. I think you go with someone in the ad company (which are different than the thing being advertised). In rare cases I think you want to kill the actor, but that takes quite a bit creativity on their part. And usually they're just trying to improve their career, which is why they are in ads and not TV shows or movies.

My computer is doing that annoying thing with the pictures too. I don't know what it is. It happens when the link to the picture isn't one of the 3 accepted image sizes. Part of the URL that says /s1600-R/ is the size of the picture, 1600 is the biggest one, but in the past, they all had a "-h" instead of a "-R." I hope this isn't some kind of blogger-wide change.

They have a dance team, but Kim's the only girl I wanna look at.

Didn't realize it was a law about the ads. As long as they're gonna have that law, it should only be for when the politician him/herself isn't directly speaking.

I tried the medium and big sizes, and both are screwy. There's gotta be a way around this.

Pretty sure that Mrs. AJM hasn't worked on any car campaigns, not recently, anyway. I would be surprised if some division of the enormous Ad Conglomerate that she works did in fact produce that Cadillac ads, though. Wonder why Cadillac never thought to use The Clash's "Brand New Cadillac" in an ad? Great song.

And I'm really, really psyched about the Celtics suddenly looking like world-beaters again (or, at least, Easter Division-Beaters).

There is a Clash song in a car ad right now--Pressure Drop.

Yeah, the Celts are fun whether I like them or not. And it's rare for an NBA team to be fun. Lately.