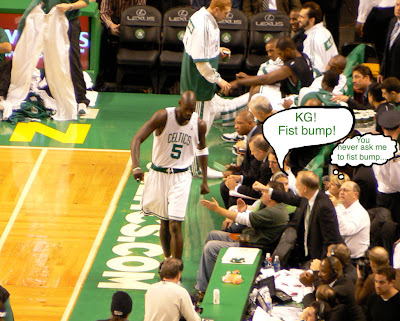 I don't follow pro basketball much anymore, and never was a Celts fan. So I'm not gonna pretend to be one now, but, still, going to games is fun, and here are a few pictures:

The Boston Celtics logo in the middle of the parquet floor. This was my first trip to the Boston Garden (call it what you will). (I never got to go to the old one, either.) It seemed huge to me, compared to the site of most basketball games I've been to, the Meadowlands Arena (call it what you will, again). But it turns out its capacity is less than that of the Meadowlands. Maybe it was just because Nets games never fill up, and everyone's on one concourse. In Boston, it's two levels of concourses. And they're all nice and clean and non-bus station-smelling. (Another reason it seemed bigger was because my seats in Jersey lately have been in the lower deck, whereas Friday I was up top.) The crazy scoreboard. It did some stuff I don't like, like telling the crowd to make NOISE!!! and stuff. But overall, the experience was less-offensive than the Nets' "music playing on literally every possession" recent tradition. It's weird that the Celts have dancers now. Hey, if girls who just like to ogle the male players are called "pink hats" by macho dudes, what do those guys call themselves when they're ogling the near-naked women dancing on the court during breaks in the action? Do you think a team would ever allow some kind of Chippendales dance team, if it was demanded by female fans? Never. So, men, don't make fun of women who, god forbid, notice athletic people of the opposite sex while they're watching the same game you are. Except for Jeter-ettes. They should be banned. And, okay, if you're a huge sports fan who happens to be female, and the girl sitting next to you knows nothing except for who has the best butt, I can see making fun of them. But you know what I'm drivin' at here. Moving on.... 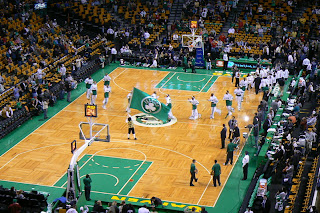 The Celtics take the court, led by non-furry mascot, Lucky the Leprechaun. I definitely tried to figure out if people were there because "hey, I heard on TV the Celtics were good again," or if they were just normal fans. At first, I was getting a bad feeling, but overall, it just seemed like any other fans of a team that went from crappy to awesome overnight. Here's a question for you: How come they always used to talk about how Boston sports fans were miserable, and secretly loved losing thanks to their Puritan work ethic and long, cold, winters, when the basketball team was winning all the time--more than any other, in fact? 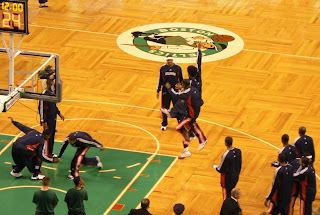 The Hawks doing the now-cliched, but still fun activity of bouncing off each other during intros. 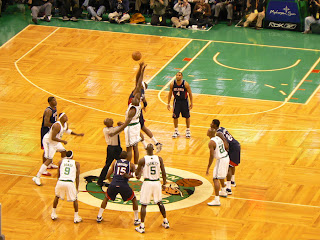 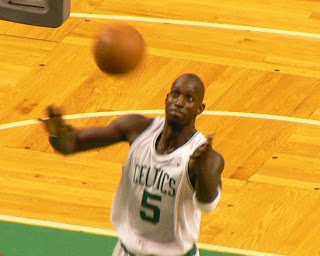 Kevin Garnett looks like a high school kid playing against a bunch of pre-schoolers. I can see why Boston is excited about having him. They won this and the next game, and are now 5-0. 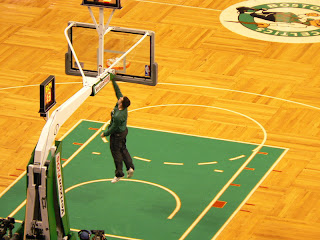 You know how I like to take shots of bat boys collecting pieces of a broken bat? The basketball version is "ball boy/floor mopper fixing messed-up net." 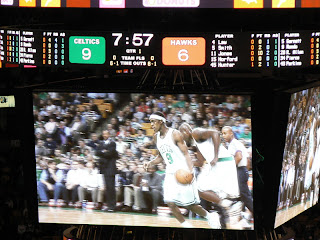 Close-up of the futuristic scoreboard. I guess gone are the days of the two team names in individual lights, with the score looking like old alram clock numbers. 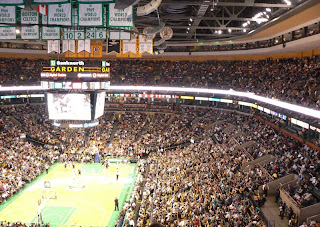 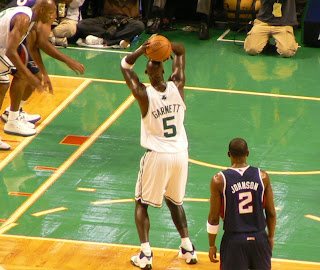 KG at the line. 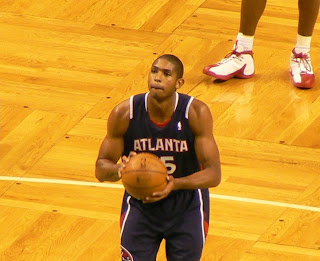 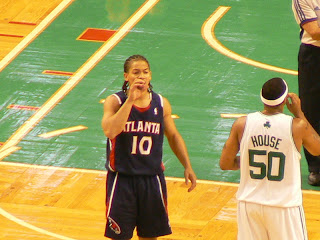 My dude, Lue. (Went to my school, Nebraska.) 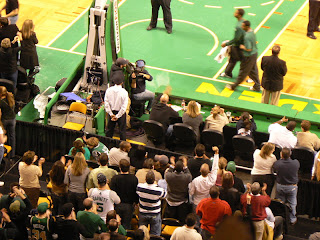 As you know from the video I posted the other day, Terry Francona was in the house. It's funny, because I'd scanned the entire front row with my zoom for celebs, and found none. But Tito was right down in front of us, so even if the guy's head in front of me hadn't been in the way, I might not have noticed the back of Francona's head anyway. (Speaking of people in front of me--lots of leg room at the new Garden.) 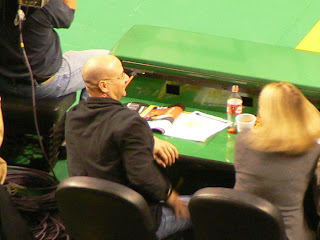 So during a break, they announced Terry was there, and showed him on the board. People are really excited about the Celts. But Terry still managed to get the biggest cheer of the night. 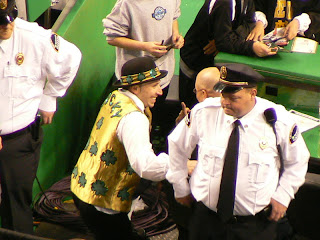 Lucky chats with Tito. So many people came up to Terry to get his autograph, he eventually had to have the cop stop people from getting to his seat. 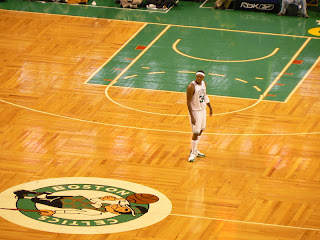 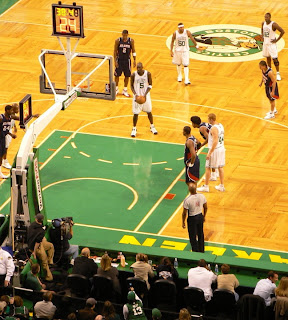 Once I knew where Tito was sitting, I started taking shots of him with action going on in front of him. 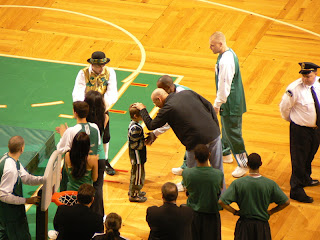 So, as you know, Tito was on the floor for the special dunk. Before that, this kid did a dunk, and Tito gave him a pat on the head. 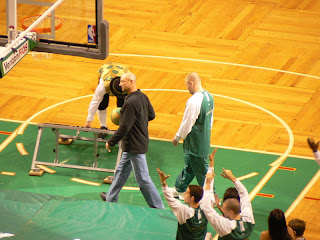 Then, I knew he was gonna be part of the act. Sure enough, they give him a ball and he goes and stands under the hoop. I love the facial expression here: "Yeah, I can ball." 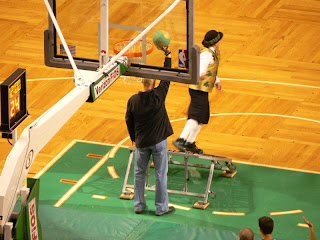 ...and here's that dunk again:

The Celts kicked butt, and the only down point was when Scalabrine got injured: 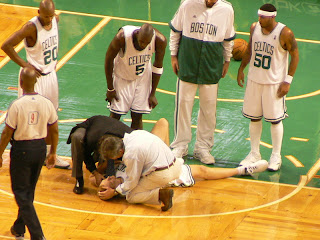 The dude is a fan favorite. I want to do a serious study of this. I remember Greg Butler was a huge fan favorite among Knicks fans back in the day, and I thought at the time it was because he was the only white guy. Obviously, fans like to see the scrub get action. But is it because he's the underdog or because he's a white dude, and most of the crowd are white dudes? I think this a form of racism, but, again, I'd have to do a more in-depth study. (Lemme guess, some of you think I'm crazy, others think I'd be crazy to ignore it. Either way, if you want to share your opinion, please be respectful and don't just call me stupid or whatever. I've given examples of the white guy specifically getting the cheers in both New York and Boston, so I'm not trying to pick on anybody, nor am I calling you a racist if you're a Scalabrine fan.) 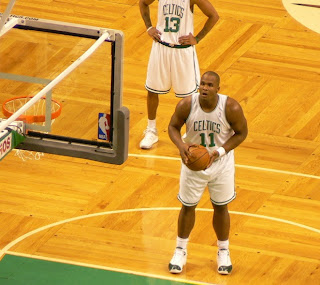 Finally, from my dad's school, LSU, it's Big Baby!

After the game, we got on a crowded train, and right there next to us was my cousin. Incredible. And we'd already scheduled to hang out with two of my other cousins two days later, which we did today. (You know Kara and Mel from comments? It was them, and other members of their familial crew. I hadn't seen Kara in years, as she just moved back to the east coast from San Diego. Was great to see so many cousins this weekend!)

I've got two tix to the game on November 29th, Celts vs. Knicks. These will be given away to one of you, my loyal readers, and/or some schlub who never heard of my site but heard they might get free tix if they come here. It'll happen very soon, so check back here if you're interested.

Comments:
It was great to see you, too, Jere! We'll have to all get together again soon.

why are you giving them away? Your girlfriend wrote that she had a great time and wants to go to MORE games? I'm confused.

I bought two tickets specifically to do this raffle deal, which you'll find out about soon.

Doesn't mean we wont go to more games. She already knows her birthday present is another game a few months from now.....

Kind of like how Sox fans make Lou Merloni a fan favorite. Everyone knew he wasn't that great a player and figured he needed some love.

But there are other bench players who, when they get the ball, don't have the whole crowd give an anticipatory cheer, then go nuts as he shoots, and lets out a huge "Awww" when it misses.

What your saying makes sense, that often teams have a non-star that fans love. But in baseball, white guys aren't the minority, so there's no chance people would've been cheering Merloni because he was white. Whereas in basketball, a white guy in the league is probably going to not be a first-stringer, which is the only reason my whole theory can possibly come into play.

Again, though, the Celts just happen to now be the team I see most often, so I get to really see this affect with them only. But I saw it with the Knicks and Butler, and the Nets and Chris Dudley back in the day. (And Scalabrine when he was on the Nets a few years ago when I was still following them.) I guess my big question is, why is it the white non-star who always seems to get the extra cheers? Maybe it's because they're an anomaly, just like how the overweight or weird-haircutted athletes get cult followings. And maybe it doesn't happen "all the time," but since I've noticed it a few times, it just seems like a really common occurrence.