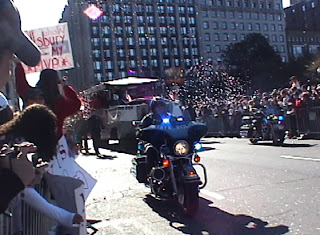 Never have so many 13-25 year old female humans written the word "Ellsbury" in marker on a slab of cardboard in one day.

So here I was again, waiting for a Red Sox World Series victory parade to start. Sweet. Kim wasn't given the day off work, and Pat couldn't make it up from CT either, but my parents decided to take the train from New Haven to Boston so they could see it. I got to the route around ten, and it was fairly empty, although plenty of people had already staked out spots. I had many options. Go near the Pru to get it the background of my shots. Go to Copley where there'd be a big screen and a big crowd. Go anywhere along Boylston for an up-close view of things. But then I started thinking about 2004, how it's really a crap-shoot in terms of who you'll see, because half the players are on one side of the boats and half are on the other. So I found the one spot on the route where it takes a hard turn. I figured I could see the left side of the boats as they came up alongside the Common, and then the right as they passed by me on Tremont St. And that's the spot I chose. Before you call me a genius, note that I only ended up filming the left side of the first boat. After that, all I wanted do was pay attention to what's going on right in front of me. 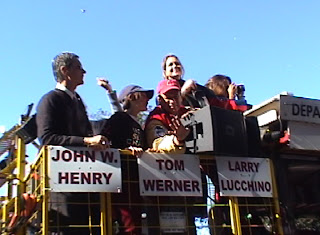 Above, Henry and Lucchino. Getting back to the story, though, I'd brought my video camera, as I wanted to tape the whole thing like I did on 2004. (Here's the movie I made out of that footage if you missed it. Note: also includes footage of Sox in New Haven and the moon I filmed on the night we won.)

So, unless I had someone with me, I knew I wouldn't get still shots. I'd called my parents and let them know where I'd be, but their train was late, so I didn't know if they'd find me. I thought about asking the kid next to me from Portsmouth for his web site address so I could at least link to his shots. But it didn't matter, as my parents did find me, and my dad took still pictures. Great job by him. 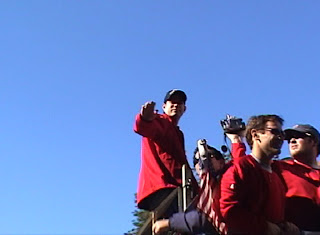 So, I'm taping. These are video stills. You can click them, but they're probably better at the size you see them here. Above, Theo Epstien. 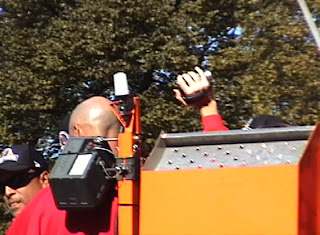 We didn't have a clear shot of Tito, but that's his head. 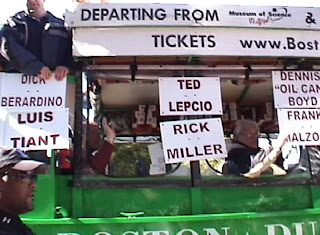 Rich Gedman! (middle, red sleeve) In 2004, as I filmed Johnny Pesky going by, Pat and I were completely oblivious to the fact that Geddy was right behind Pesky. When I watched the footage later, I was shocked to see this perfect shot I had of Gedman going right past us. This year, I didn't know if they'd have past players or not, but all of a sudden, there he was again! This time, I got to cheer for him and just watch him go by--as my mom repeatedly yelled "Ged-man" in the funniest moment of my video. Of course, this all led to my filming work to suffer, and this is the best shot I ended up with. No complaints, though. If you had told me in 1988 that our catcher would eventually be in a Red Sox WS parade, twice, almost 20 years later, and I'd be there both times, I never would've believed it, but instantly would've signed up for it. 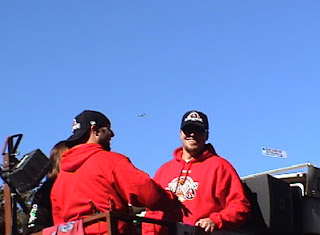 Pedroia and Hinske. I have some shots of some people that are essentially the same as what my dad got, so I've left those out of this post. 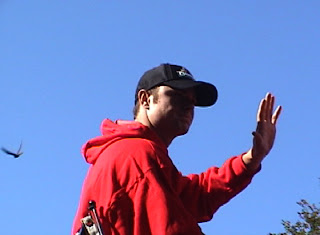 Well, actually, this is kind of the same pose by Lester as in my dad's shot, but it's actually a different wave than the one he gave my dad. Plus, this shot has a bird in it. So, the day was chilly, but only in the shade. Unfortunately, I was in the shade, sitting still from 10 to 12 just waiting and shivering. Around 12:45, the sun finally reached our side of the street. At that point, I was hoping the players would beat the sun to our spot, to avoid glare, but it wasn't to be. But at least we got warm. After the parade, even right on the water, it felt like a summer day. 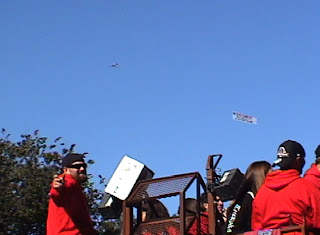 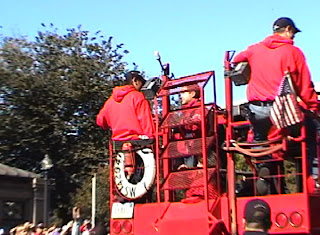 Dice is another guy we didn't have a view of, so, again, you get the side of his head on the left. 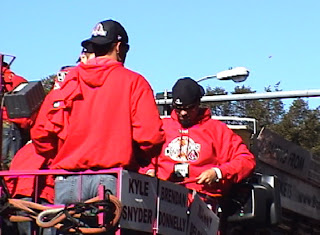 I was so psyched that the bullpen dudes had drums and sticks and stuff. Here, Manny Delcarmen and Javier Lopez bang a drum. 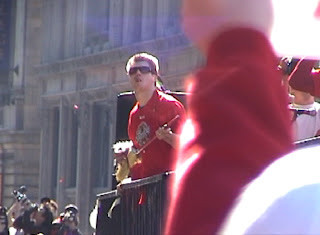 We didn't see a Papelbon dance. Not many did. But we did see him playing the broom along with the Dropkick Murphys. 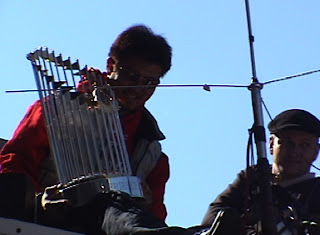 Okajima was on the front of the flatbed truck that carried the band. 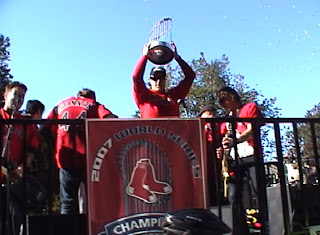 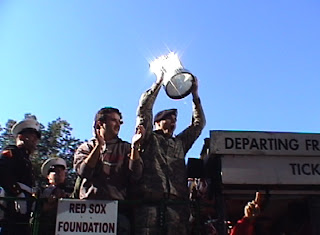 I liked how excited this military dude was, and how he held up the trophy right in the sun. 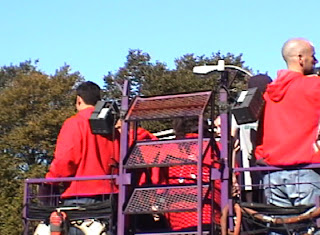 Another left-sider was Jacoby Ellsbury. His head is on the left there. 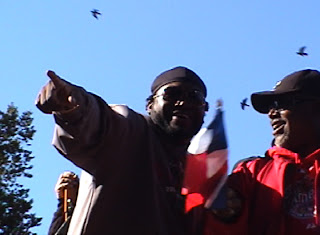 We also lucked out when the boats stopped for a few minutes--with Papi right above us. I think that's his dad with him. 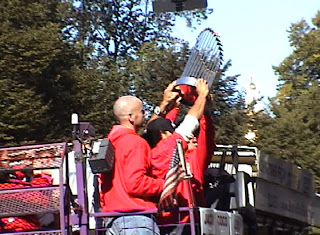 Coco and Drew hold up the trophy. 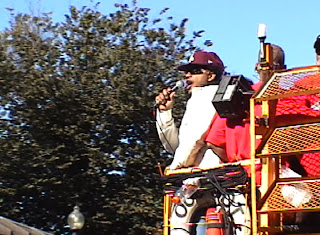 We could hear Manny talking on-mic on the other side of Papi. "New York who?" "Forget Disney, we're partying at my house tonight, my wife's gonna cook for all of you!" Finally, the boat moved, and we actually got to see him. 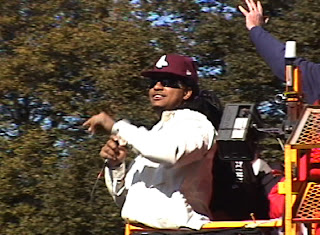 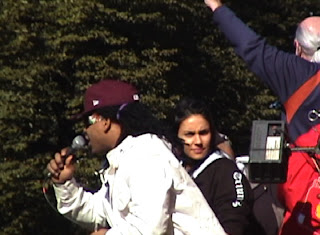 Manny and his soon-to-be-busy- cooking-for-thousands wife. I really liked how Manny has a "fan"-type Red Sox hat on. Players never do that. Usually, their own off-field hats aren't of their own team. 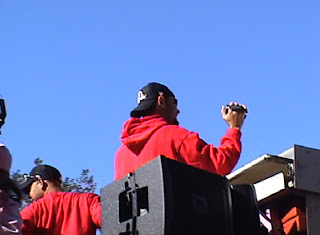 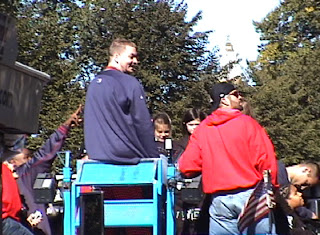 Jason seemed out of it when he went by us. But I got this shot of him standing and about to be waving after he was past us. I liked comparing 2004 parade reactions to 2007, for guys who were on both teams. 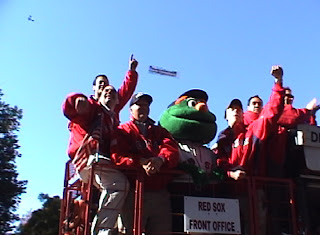 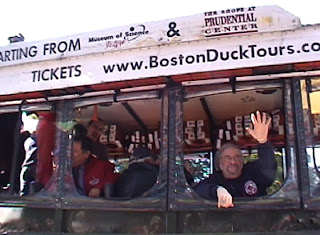 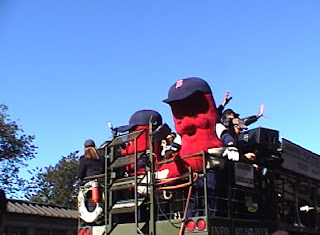 Left and Righty. That's Tina Cervasio's hair on the left, and barely visible next to her is Don Orsillo.

I've been noticing that whenever I or anyone else refers to 2004, whether it be the parade, the team, the playoffs, we'll start to say "last year," before correcting it: "or...2004." It kind of does seem like we'd all just been waiting for this to happen again. And it did. The rally was loud and packed and awesome. The crowd seemed thin shortly before noon, which made sense since it was a weekday, unlike in '04, but by the time the ducks rolled by, the sidewalks were full. I watched the NESN and Comcast Sports replays of the whole thing when I got home, and you could see just how massive the crowd was, especially at the end of the parade in City Hall Plaza. Oh, but before I went home, my parents and I walked all around that whole Faneuil Hall area. I'm learning more and more about the layout of this crazy town....

[Update: Buy the entire video, which includes the 2004 rally, here.]

Comments:
hey Jere - I got some of the shots that you didn't (but also missed a lot of the left side guys, who my cousin got - i'll post when she sends her pics!)

We also got papelbon dancing on video, i'm going to try and get that online in the next couple of days and will let you know!

Nice job. soxylady.blogspot.com if anyone wants to check those out.

great pics! manny with the mic was the best, wasn't he? funny we were in almost the exact same spot.

did you see josh beckett at any point? was he on the boat with schilling? i didn't even see his name tag on any of the boats, but i saw him interviewed on nesn before they got on the boats, so i know he was there somewhere...

Thanks. Beckett was on an early boat. Part one of my pics shows him! Scroll down....