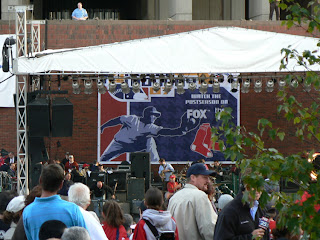 It's not often one of my galleries starts out with a shot of Peter Tork. Here he is at Rally Monday at City Hall Plaza, or Government Center or whatever you call it. He seemed to be a Sox fan, and he played songs with the word "believe" in them. Michael Nesmith is my favorite Monkee. 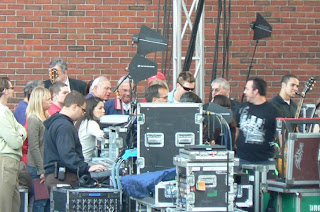 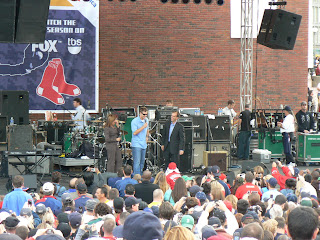 Papelbon said some funny stuff to us. Here, he's sandwiched by the two TCs. I found out later that several other players were there, but I missed them all, as I got there at 5:00, figuring nothing cool would happen until at least then. 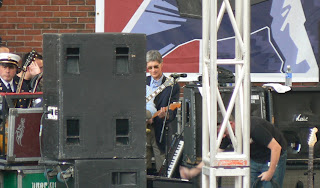 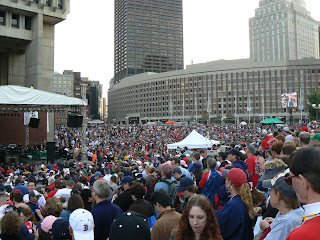 The place was packed. I even saw Crazy Chris Collins from NECN there. 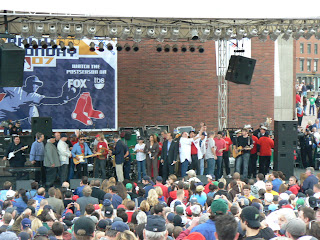 The big sing-along, with The Standells and everyone else. Below, Joe Castiglione sings along to Sweet Caroline! 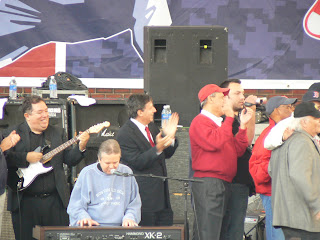 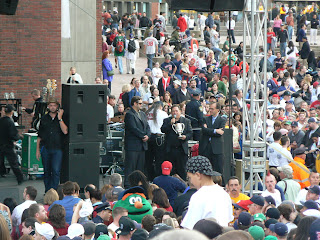 Pete Nice with the 1912 World Series trophy goes for his. (Wow, so, since I'm seeing Henry Rollins soon, I will have seen two people from the "Pop Goes the Weasel" video within a week.) 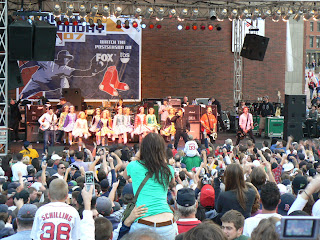 The Dropkick Murphys were the big attraction, and their fans came out. Here they are with some Irish jigster girls or whatever. 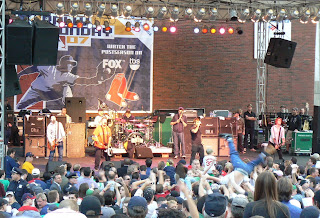 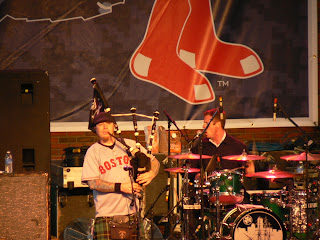 When the pigs saw some fun being had by weirder-looking, younger humans, they were quick to jump into the crowd and put an end to it. Yes, the ones in back are in riot gear. 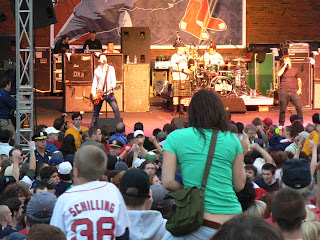 Murphys. You can see some pigs in the crowd. 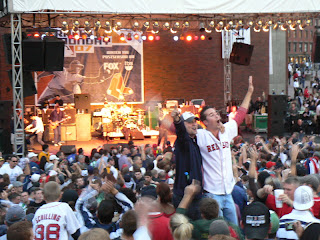 It was all pretty fun. Then I went to our playoff softball game. We lost. I played well again, and I was psyched that the final inning was extended enough for me to get one last at bat, looking for a 3 for 3 day. I lined one to right, but somehow the girl on first got forced at second, ending our season, with the tying run on at least sextuple deck. I totally wounded my knee in last week's game, allowing dirt to fester in there. I like to dive and slide and stuff. It was cool how some blood ended up in those strings that go across knee-holes on jeans. But I ended up with a hole in my knee that oozes gray stuff and looks like a little flame. Firebrand of the American League, I guess. Anyway, I avoided sliding today, but I somehow went to a knee to field a grounder, and landed right on my flame-hole-wound-thing. At least the season's over, so I've got time to heal. My girlfriend and I made the play of the year tonight, too. I was at short, and a guy tried to score from first on a ball to left field. I went out and took the cutoff, and saw the guy rounding third. I fired the ball in to my girlfriend who was catching. The ball took about three hops, but it was right on target. She caught it and made the sweet tag. Out at the plate. Doesn't happen in softball very often. It was a fun season, my first time playing any kind of organized ball in 13 years. [Correction: That's way off. I was actually playing left field that inning, and I was playing shallow, and it was a ground single to me, and I threw home. Sorry to make you all pull out your scorecards again.]

Comments:
Have fun on Friday, Jere. It's a Bruce night in Hartford tonight, and I can't wait! Be well.....

Nice softball work! Next season, I'll get down there to watch you play.

Re: Monkees: I had a huge crush on Micky Dolenz when I was a kid.

I swear - Dropkick Murphys - are so awesome ... I can't wait to see them in November in Minneapolis ...

And thank you for all the pictures and commentary ... I felt like I missed out on nothing ... when I missed it all !

How could they not invite Jonathan Richman?

And who knew that John Henry played guitar?