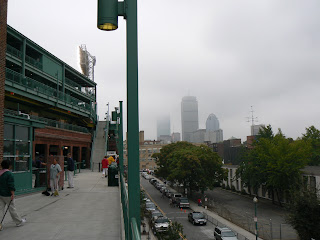 A gray day in the Fens. This game was the annual birthday present I give to my parents. But I ended up getting two more (way better) seats, so my girlfriend and I could go with them. Note: A good way to get into (and out of) the park is the side stairway by Gate D. This pic is taken from the top of that stairway. I think people think it's a special entrance for special people, but no. Any ticketholders can go in this way. 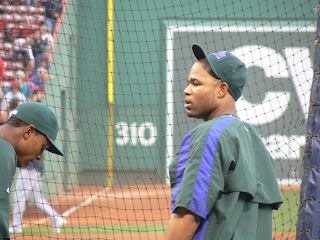 We got in a little late, as my mom and I were doing a little research for our upcoming book, so we missed the Red Sox' BP. But we saw plenty of Rays. Here's Carl Crawford, with BJ Upton to the left. Click any of these to enlarge for a nominal fee of zero dollars. 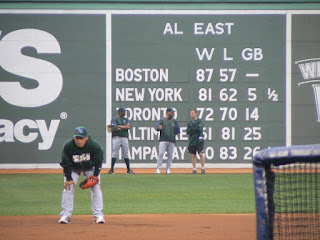 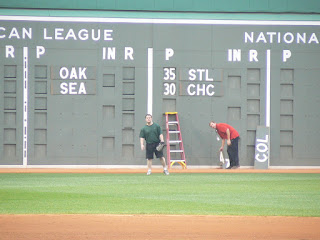 Since it was the first game of the homestand, the team names weren't up on the out-of-town scoreboard yet. Thing one puts up the names while thing two gets to wear a glove and protect thing one from batting practice balls. 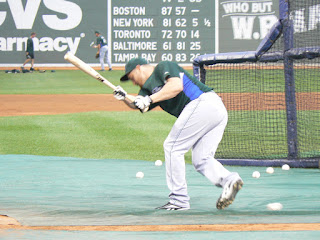 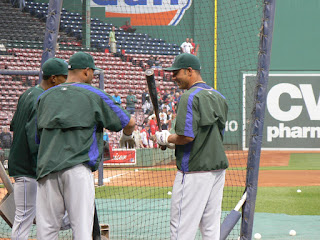 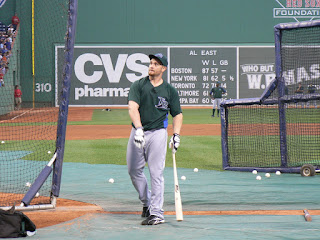 Gomes throws a ball to a kid in the crowd. It seems whenever a player throws the ball to someone in the crows, their estimate of the distance to that person ends up being way short. You ever see a visiting player try to throw a ball to the Monster Seats? Three tries, minimum. 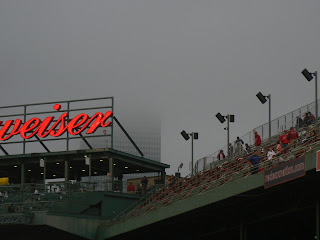 There's a skyscraper in this shot. Find it. 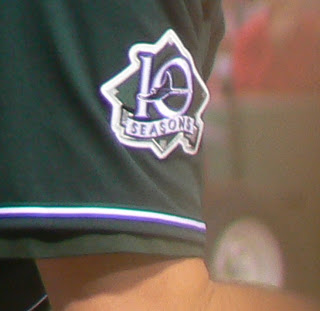 I wasn't going for this shot, but I noticed at the very top of a picture these towels hanging in the Rays' dugout. It almost looks like it could be their jerseys, even. If they do this at every game, I've missed it until now. 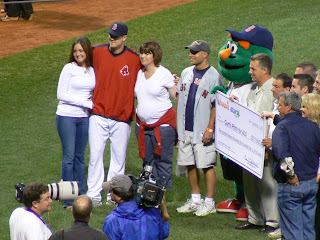 Papelbon and his now-wife do some thing with a big check. You may remember this Hub-lywood Couple from the streets of New York in this post. 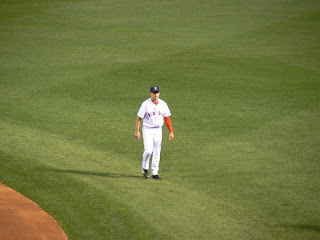 Jacoby & Myers (I finally thought to check how the law firm spells it--it's "Meyers." Oh well, I'm stickin' with "Myers.") before the game with his special sleeve. Details about "the sleeve" here. See, blue state blogger, you can learn new things from Amalie Benjamin:) 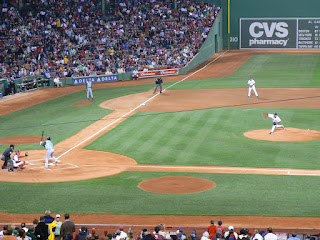 Schilling pitching in the first. We had two seats a few rows up in section 16, and held two standing spots behind the section, and the four of us switched all around. Since the seats were near a pole, there were empties nearby, so I got to sit in good seats from the fourth inning to the end. 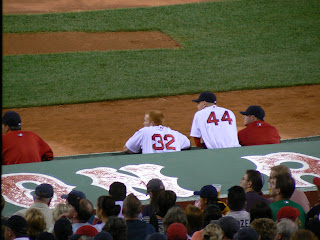 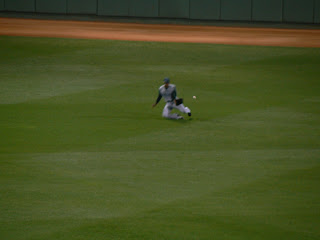 You can miss a ball, though. I'm just sayin', my game-action shots would be much better if I was there for that purpose. But every once in a while I'll try to shoot a play in the field, but it usually comes out blurry since I'm trying to watch the play at the same time. 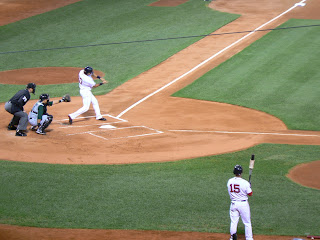 What's wrong with this picture? Yes, David Ortiz is not batting third. Dustin Pedroia is. While Ellsbury is down at the bottom and Lugo and Crisp are 1-2. I guess the excuse for Papi was that his knee was acting up, so, since it was Kazmir, give him the rest. I don't care if Papi is 0 for 50 against a guy. Put him in the lineup. And in a lineup where Manny, Papi, and Drew are sitting, how is it that Ellsbury isn't hitting one or two? You've got Bobby Kielty hitting fifth? Is that the way to beat Kazmir? If we're really that afraid of the guy, let's just forfeit the game. 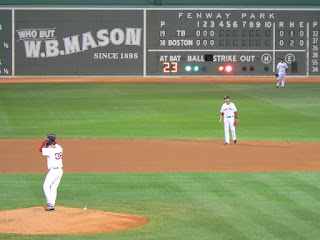 Now I'm down in the seats. Here's Schilling, with Lowell in the Caros Pena shift, &Myers in left. 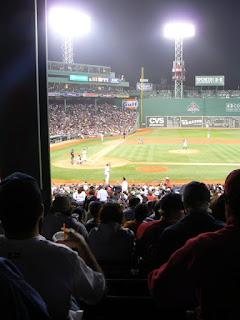 Here's the zoomed-out shot. This pole was almost in the way, but not quite. 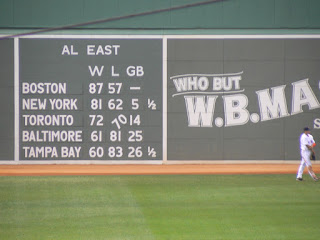 Woohoo! I get to see scoreboard screwiness live! &Myers had slammed into the board trying to make a catch, and knocked the 70 out of place. Too bad he didn't knock down the Yankees' win total. At the end of the inning, a dude came out and fixed it, but we got a full inning of the crooked 70. Anyway, if he'd made the catch, the game might still be going on now, as that would lead to the only run of the game. 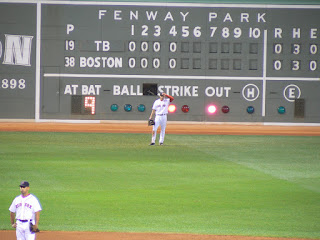 I like how you can see the cameraman in the scoreboard. 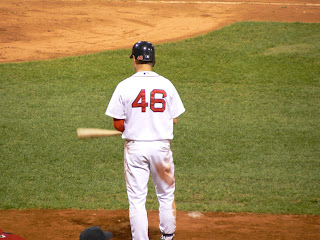 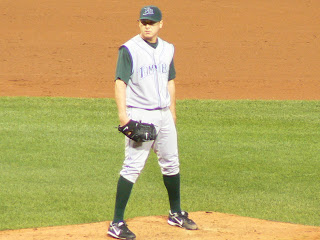 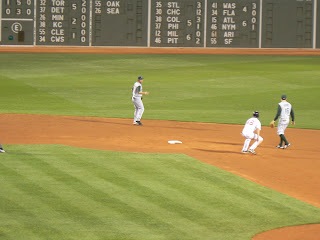 Okay, in this case, I actually was trying to get an action shot--figuring Jacoby was getting ready to run. I have a great sequence of him running, then pulling, then saying "Uh-oh" really loud (I assume) as the ball is caught, then turning back and getting doubled up. But I won't subject you to that. So here's just the "uh-oh" part. (My hands totally moved as I was trying to watch the play, which is why at this point he's way to the right of the frame.) 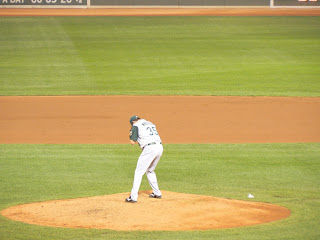 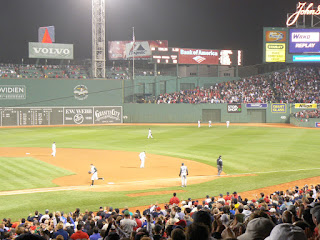 The aftermath of Coco's amazing catch, which led to a double play. You can see the kids in the front row doing the lean-down-and-pound. Why is that whole section wearing the same shirt? What is this, Camp Day at Yankee Stadium? 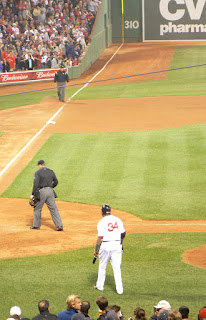 In the eighth, we knew Papi would pinch-hit for Kielty. But that didn't make the ovation for him when he emerged from the dugout any less booming. It really was incredible. A burst of cheers, and a standing O. It's not often Mike Lowell hears a Papi chant while he's batting. The inning ended before Papi came up, though. So he led off the ninth, with more crazy cheering. I hope the message Tito got from this was "play David Ortiz." Unfortunately, he didn't get on, and we went 1-2-3 in the ninth. 1-0. Loss. Great job by our pitching, though. And that's what we like to see. Kazmir was on tonight, and we looked like fools against him. Lowell had the green light on 3-0, but Kazmir must've known, because he threw an off-speed pitch, which Lowell missed horribly. Then he got his fastball, but watched it. Then he swung and missed again for the K. And it was like this all night.

Yeah, like how to TOTALLY bamboozle guys into thinking you know what you're talking about (Actually, I learned how to do that a long time ago.)

But I have to say, that one-armed sleeve thingy WAS weighing heavilty on me...