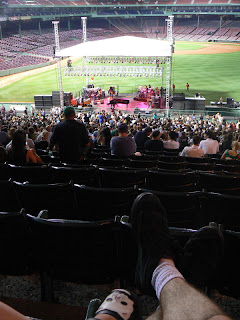 The stage set-up tonight at Fenway Park for the Hot Stove/Cool Music concert. At this point, we'd moved up to the last row, but our real seats, as you'll see, were much sweeter. Click for biggie size. (Pics from past two years' concerts: 2005, 2006.) 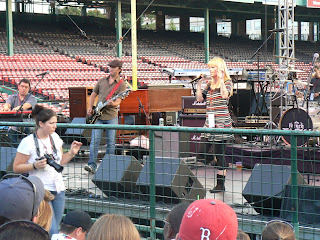 Despite what I said in the post below, I couldn't leave the TV until Tek's homer made it 11-3 in game one. Then it was safe to leave. I met my girlfriend at Fenway, who got there just before me. The first band we saw was Kay Hanley's. Kay rocked it pretty good. 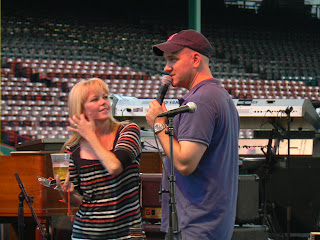 Mike O'Malley did a good job as emcee again. He's a funny dude. Lots of anti-Yankee stuff from him, and wishes of Papi homering off of Joba "the Slut" Chamberlain. (aka the Jobber, which is what Remy will call him.) They also did the usual auctions for charity between bands. 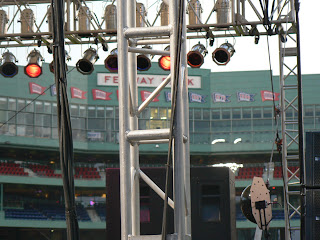 The Fenway sign through the stage-y stuff. Turns out we were right in front of the speakers but my ears aren't ringing too bad right now. I knew where the stage and our seats would be--but what I didn't realize was that the stage was in/over the bullpen, as opposed to on the field with the bullpens between us and it. 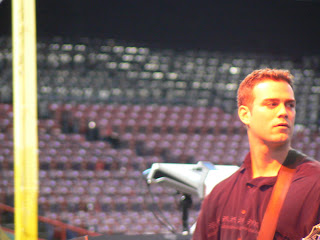 Theo takes the stage with Buffalo Tom, who were really good, too. Despite that, like with Kay, we see them every year at this thing. (Yes, that's Pesky's Pole and yes, that's what I was going for.) 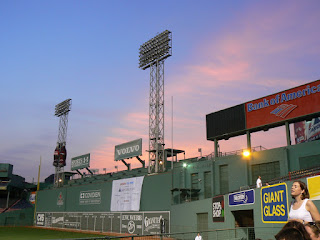 The sun starts to set, and we start to wonder about game two, which is getting underway in Chicago. 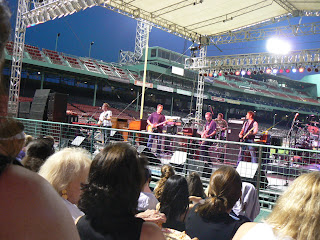 Another shot of "Buffalo Theo." 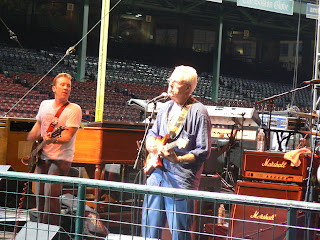 Now Gammons is up there. You can see the incestuousness of these bands. 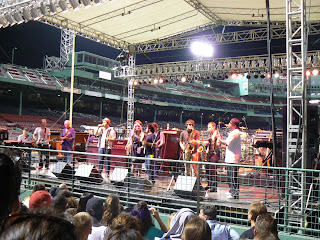 Gammons, with the Buffalo Tom guys, with Ian and the Paperclips or something... these people broke out a pretty cool tune. Gammons' stuff is just straight-ahead blues rock. I guess. Before and after he played, people kept asking Gammons questions. He was asked about his favorite non-'04 Red Sox moment. My first thought was, "I better hear Bernie Carbo's name." Peter said it was the Fisk homer, and then added "after Carbo's." Nice. 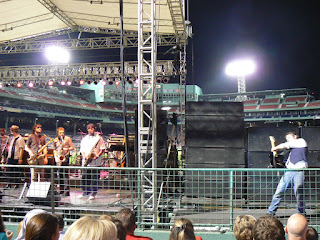 This dude from The Gentlemen (Jim Gent?) did the "off to the side" thing--actually on the roof of the bullpen. 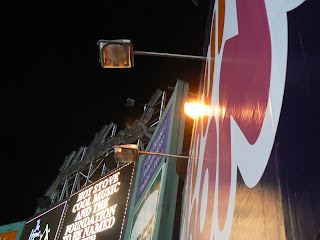 At this point, only John Legend was left (the one act we hadn't seen in years past), so we decided to get a different view, so we went up to the Dunkin' Dugout. Note the turned-off John Hancock sign. 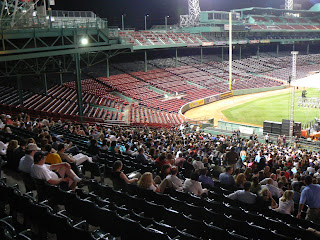 Looking left toward right field. I was surprised the bleachers had all these empty seats. But people were psyched for Legend, who we weren't really familiar with. 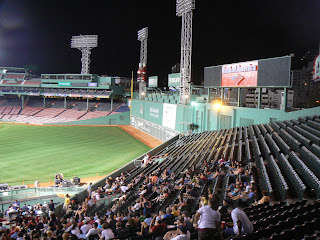 And looking to the right of the stage. I love the fact that it's Fenway, it's night, but some lights aren't on. Cool effect. 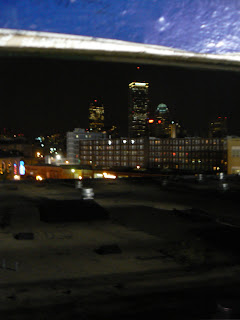 Looking out beyond right field, under the Dunkin' Donuts sign. 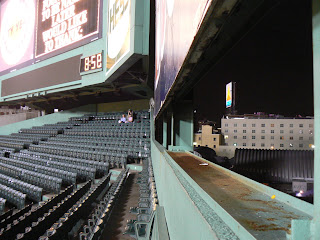 At right, the Citgo sign. If you've never been to Fenway, you should be saying, Wait, isn't that over the left field wall? It is when looking from home plate, guy/missy! 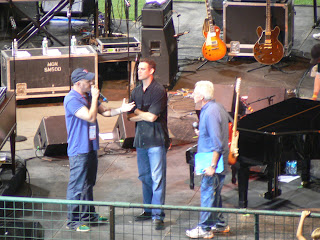 Still waiting for Legend to come out, Theo took some questions. He also gave us updates on the game! He had his cell and while looking at it, told us Schill had given up a homer, but then said that "Papi hit a two-run bomb." Then he told us it was 4-1, second and third, and the White Sox were changing pitchers. He added, "and it's starting to rain, so we need to get to five and dive...." 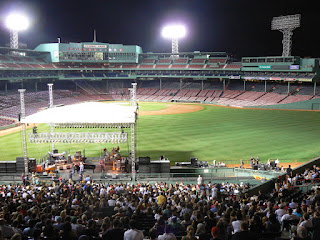 Wide shot showing some lights on, some off. 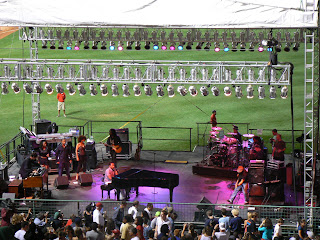 John Legend. This dude was pretty cool. R&B, with the fastness and the slowness, too. Fun stuff. 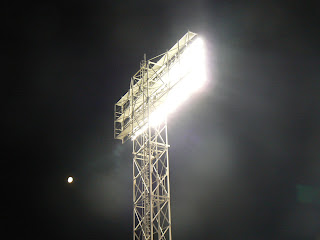 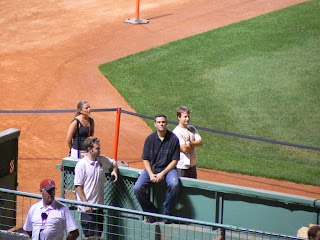 We got to the car to hear the Sox had gone way up. Got home and saw the last out. Doubleheader sweep! Amazingly, it was 11:00, and the Yanks were just about to start after a long rain delay in Detroit. It's now 1:30 AM, and I'm watching their 6-6 game on mlb.tv. Sixth inning. I'll update this when it's over. I'll be up.

Update, 3:33 AM. Tigers finally win! 9-6 on a two-out, three-run homer by Guillen! We're 6.5 up, and we clinch being ahead at the END of the Yankee series next week. But we should be way up at that point. Man, was I worried about this day. We had to play two, while they play a normal game after a day off. Instead, we win both games, they get a four hour rain delay, and then lose a 4.5 hour game, that ends at 3:30 in the morning. Yanks are done, people. Yanks are done!

Comments:
First of all, the pic of your cat brought tears to my eyes...he (she??) looks just like my kitty, who I had to put to sleep. After almost 19 years. So please, keep that pic there....thanks.
Glad you had fun last night...I was a nut too and listened to the Yankee game until the sudden and sweet ending.
What is your cat's name? I wish I could click on the pic and it would enlarge. You see, after 19 years of being together, I still haven't gotten over my loss. Thanks Jere.

Just a little perspective, Jere:
On this date in 1978, the Sox had a 7.5 game lead, and in fact they ended August with a 7 game lead. Everyone always seems to assume that the '78 Sox collapsed in August, but in fact they went 19-10 in the month (after a 13-15 July). The actual collapse occured over the first 11 days in September, including of course the infamous four against the MFYs.

Now, don't get me wrong...I fully expect to Sox to win the division easily. My point is that yesterday was a great and very encouraging day, but this still isn't over yet, and the Yanks aren't done yet. Fortunately the Sox are a deeper team with vastly superior pitching than they had in 1978. And it also helps a ton having Tito instead of that drooling moron Zimmer in the dugout.

I kinda like John Legend; he went to the same college as me, only many years later. And I always love me some Kay Hanley...did she do Summer Baby?

Peter, that's Larry. He's lying on the floor next to me now, cooling off thanks to his good friend the fan.

AJM: I'm with Chris Collins. We've got this thing. Kay didn't do that one but she did that "I'm awake and you're asleep" song. But not that big LTC hit...

Of course, the other thing people forget about '78 was our amazing comeback in the final week to force the 'corked-bat', 'Lou's sunny luck adventure' playoff.

Can we have the Kay Hanley/Dropkick Murphys argument/discussion that was so much fun in the comment section of last year's Hot Stove post? Because it's been another year gone by and, man, do I still hate "Tessie..."

Sure. I still say Tessie is perfect. Also, insert all my old reasons.

So, that reminds me of another DM thing I forgot about. I'll post it, like, tomorrow, maybe.