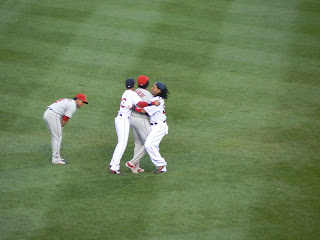 Four wins in a row, and five out of six. Those are my current in-person Red Sox streaks. Probably my best stretch since the legendary '03 streak of nine in-person wins in a row. I'm gonna go ahead and post pics from tonight, and then approximately Monday night I'll put up my shots from BucHHolz' first start. Above: Lugo and Manny do the sandwich hop with Vlad. Click each pic to magically big-ify it. 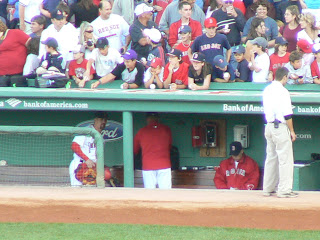 Here's Varitek in the dugout, with Brad Mills at right. For this game, I was alone, so I stood up beyond third base and later went all the way over to right field. I didn't get there until right before the game, unlike Friday, when I got a lot of pre-game shots. Watch for those soon. 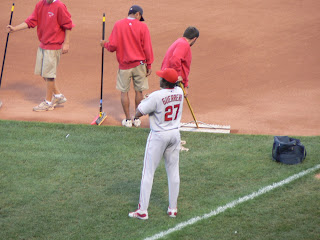 Vlad and some infield maintainers. 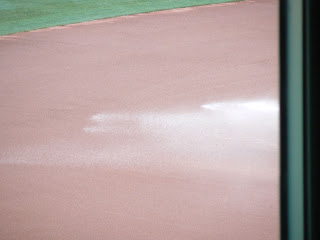 The infield getting sprayed. At right, a pole. 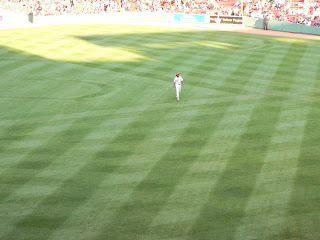 Vlad in a sea of green. In center field, we've still got the B in a home plate, which first appeared this homestand. Previously, they had the "three circles" pattern. Does anyone keep the stats on outfield grass patterns? Anyway, in right you can see the tribute to Tony C. I couldn't tell what it was. A 25 in a circle maybe? 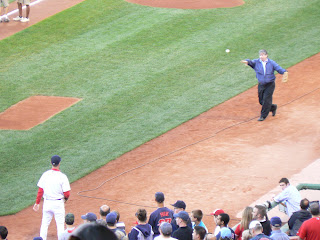 Jeremy Kapstein started warming up before the game. Then they said it was Rhode Island Day, so it made sense he'd be throwing out the first ball. 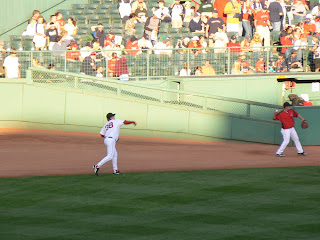 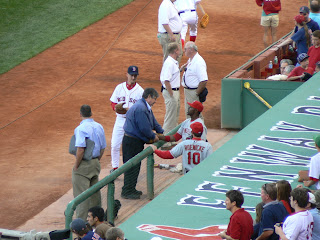 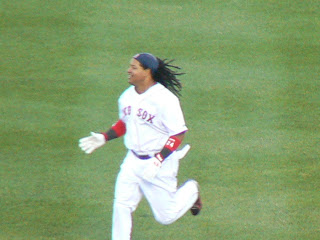 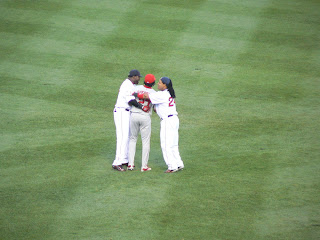 Now Papi has replaced Lugo in the sandwich hop. The Dominican Sox crew loves playing the Angels. What a fun team we are. Note to people who are new to baseball, and have heard people speak of "hating the Red Sox": there's not much not to like. We're fun and we're fighting the Yanks for you. You don't have to like us, but hate us? No reason for that. I heard L-Girl say "accept the hate" like Yankee fans do. Not me. Yankee fans know everybody hates their team for obvious reasons. My team never did anything to make us hateable. I'd rather continue to show why our side is the good side. When my team becomes boring, arrogant, makes its players keep its hair a certain length, has curtain calls in a 10-0 blowout, tells its fans when to cheer on the scoreboard, and starts retiring the number of every guy who hit at least .200, I'll gladly accept that everyone hates us. Oh, speaking of L-Girl--just saw this: Silverman show will be back in October! 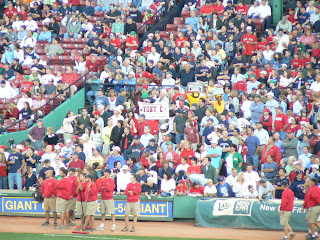 Family members of Tony C were on the field--here's a Tony C sign. 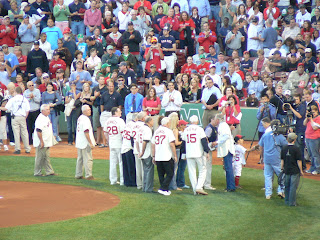 Members of the '67 team along with Tony C's family. 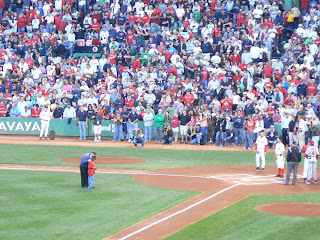 Now Kapstein is out for his pitch with a young boy. Kapstein does a lot of charity-work for underpriviliged kids. 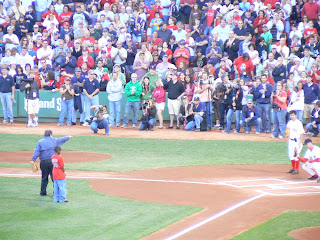 All that warming up paid off--check out the location. 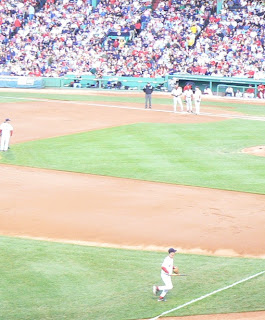 My continuing series: Batboys picking up thrown or broken bats. 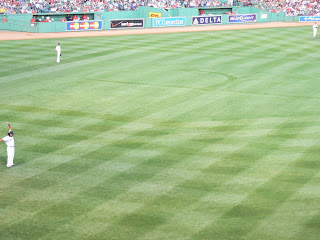 Our outfield. Oh, so it was a sweet night, weather-wise. It was really windy earlier in the day, so I figured night time at the park wouldn't be too comfortable. But it worked out. I just had to do the 90s waist-tie with my sweatjacket. (If you're going to Fenway for the first time, and you have to think about weather or not to take a jacket, my advice would be: ALWAYS TAKE IT.) 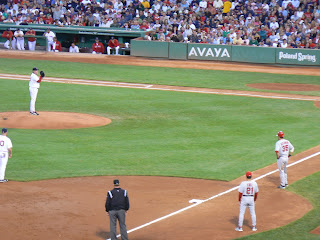 A rarity. Seeing a pitcher check a runner while going from the windup. 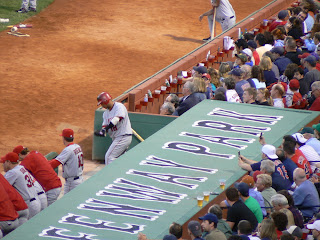 O-Cab taking half cuts in the dugout. Youk also does this when he's in the hole. 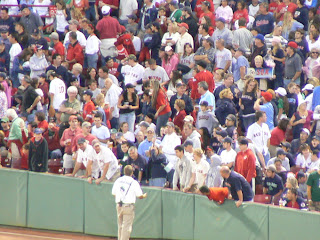 I was really far from that homer that the guy in the front row caught. Of course, I assumed he stole it from Drew. And then every few minutes, there'd be booing and standing and looking out in that area. I got this shot of the guard-dude going around and, I'd guess, telling people to keep their hands to themselves. I've watched a few highlight shows, but Hazel said nothing about a possible terrible job by the fan.... 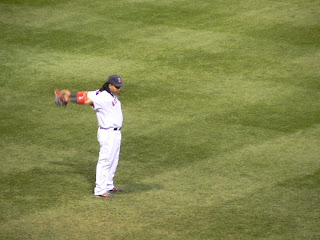 Once again, I was in Manny-land. Friday I had a great spot--well, I won't give it away yet. 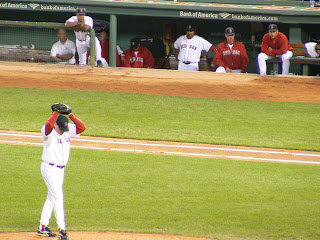 Tito monitoring Curt on the "bump," as it's now being called by everyone and their left grandma. 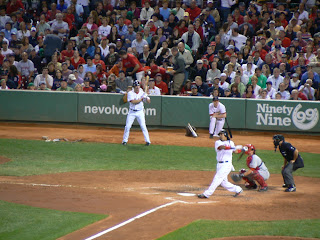 Manny swinging and whatnot. 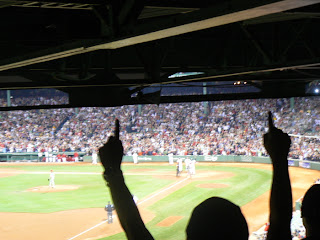 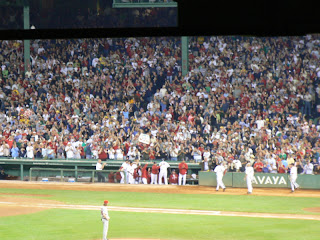 A couple of blurry shots of Papi's grand slam celebration. How sweet was that. Just saw that replay--wow, a true lunar blast. Before that inning, I'd fully hit bottom after the extreme high of Friday afternoon. And was in disbelief that everything had gone downhill so fast. Melodramatic? Sure, but this is the effin' Red Sox! You know what I'm talkin' about. But Papi pulled us out of the hole. I got to hear Castig and O'Brien interview him. They said Cora called the shot, which I guess Papi didn't know about. They also asked about Manny's key double after striking out four times. Papi said it doesn't matter if Manny strikes out 10 times in a row--"he'll eventually figure it out." 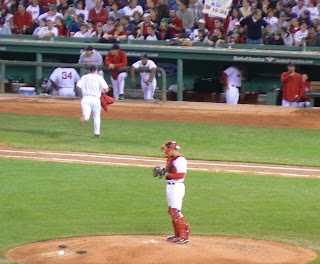 Just 'Tek on the mound, waiting for Timlin. 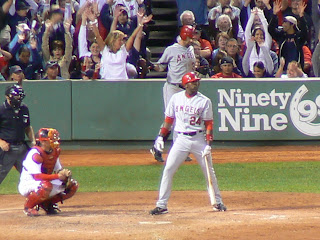 Now I'm way out in right field behind section 4. Here's Matthews up with the wave passing behind him. 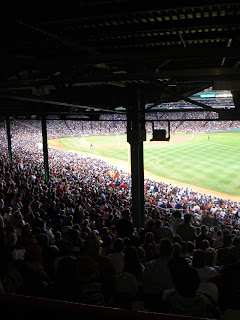 Here's the wide shot from where I was for the last few innings. For the second day in a row, I got the perfect Fenway experience. In and out for a total of a six bucks parking/subway, team wins, perfectly done Sweet Caroline, great view of the field, total price of two tickets: 35 bucks, both purchased legitimately. It's not that hard, either. I hate when people say thing like, "you can't get tickets," and "it's too expensive." Get on the ball, people. Speaking of the subway, when Boston named their T cards "Charlie," I thought, How dumb is that? It means nothing. Then, like a smart-ass, I thought, If they'd named it after that guy in the "lost forever 'neath the streets of Boston" song, that would've been clever. Yesterday, I heard that song at Fenway, only to realize the guy's name is Charlie. So, myyyyyy mistake. Nice job, Boston. Next step: make the little boards and recordings say the correct stop name. Not every time. I can't expect that. How about, let's say, once per ride....

Really fun night at Fenway. Still 5 up. Look for pics from Friday soon. I have to say, they're better than these.

Comments:
Sweet pics jere! Looking forward to fridays. You almost got a shot of a high school friend in those ground-crew shots- I got to wave at him before he cleaned up.

OK. Manny et. al. hugtackling various Angels is too adorable to be allowed.

What kinda camera are you using these days?

Chris--Are you the guy from that backpacks for kids site?

Sam: It's a Lumix type thing.