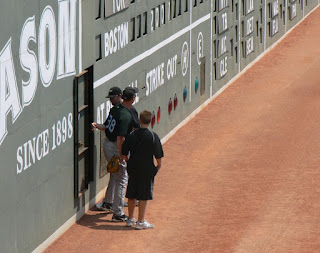 I had Monster seats on this hot, windy Sunday. No batting practice, so I wasn't too pissed that a group of 500 had to pass through the Monster seats before we were allowed to go up there. My girlfriend and I just hung out in the shade of section 32, waiting for Reb and Kristin to arrive, and watching the few players who were out on the field. Above, some Jays explore the inside of the scoreboard. They were also fond of firing balls at the scoreboard, getting that loud, metallic sound. I finally realized they were trying to throw a ball into the door from as far away as possible. Someone did it, almost from the infield dirt. 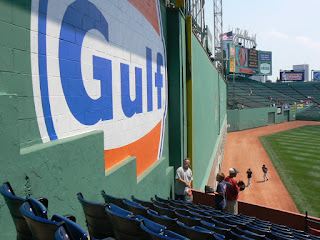 The few seats in the park that are both blue and in the modern style (non-wood). Also, the Gulf ad and the Monster from a cool angle. 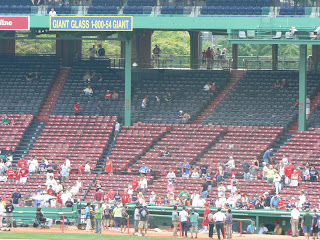 I've always loved how you can see trees behind the grandstand around the park. Here are some behind first base. I also liked how Baltimore's old Memorial Stadium had trees beyond the outfield wall. I'd dream of living out in that mysterious "forest," climbing trees, watching the games for free, and having all the home run balls to myself. I later had my dreams dashed when I found out the trees were within the grounds of the stadium. Oh well, I lived in Connecticut anyway. 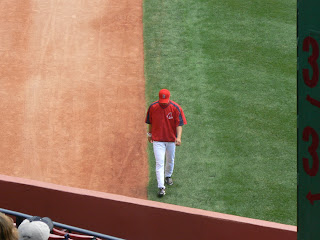 Okajima and a pole. 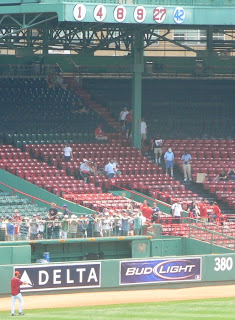 Okajima and the retired numbers. 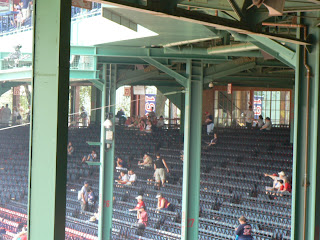 A forest of poles. From here you can see the championship flags out on Yawkey Way. 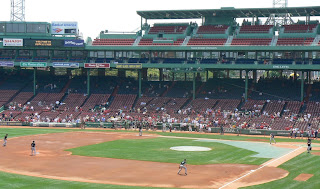 A rarity! With no BP, some Jays figured they'd take a good ol' fashioned infield practice. 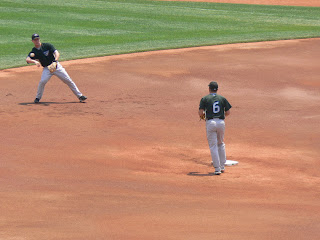 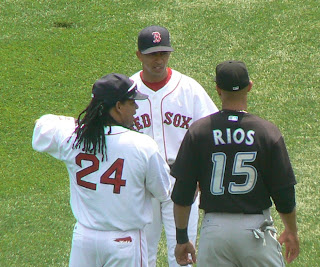 Now we're up on the Monster. We actually had standing room--I don't shell out the 140 per seat when I can get standing room for 30. Manny appears to have no arms in this photo. 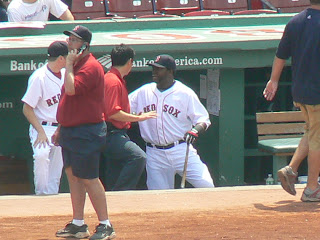 Papi in the dugout. 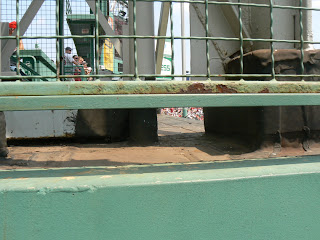 Close-up of a light tower atop the Monster. 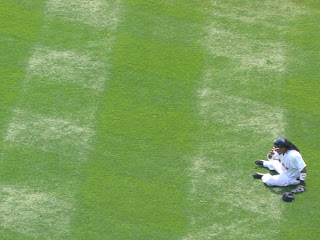 Manny after his nice catch in the first. 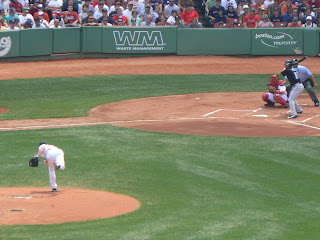 Beckett on the hill. He did well today, but it wasn't enough, as we could only plate one run, despite 11 base hits. 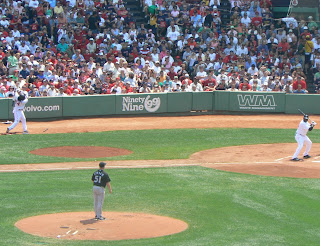 Papi with Manny on deck. 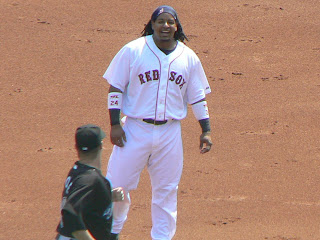 Manny after being stranded. (He swung on 3-0 on this at bat!) 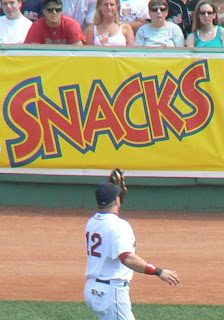 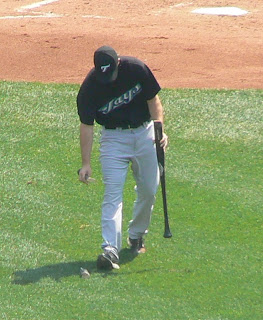 I have a thing about taking pics of bat-people collecting broken bats from the field. This was Reed Johnson's bat, in pieces, from his ground out to the left side. The guy next to us yelled, with such know-it-allness, "Cue shot!" Whoa, ginga. I'm a huge fan of cue shots. When one happens on TV, I always root for the announcer to say "cue shot." This, my friend, was no cue shot. You can't pull a ball and have it be a cue shot. And a bat isn't going to break in half on one, either. How does this guy play pool, by hitting the balls with the middle of his stick? Terrible job. I wanted to correct the guy, but I let it go. This time. Look, people, if you have no idea what you're talking about, don't yell stuff out in large crowds. 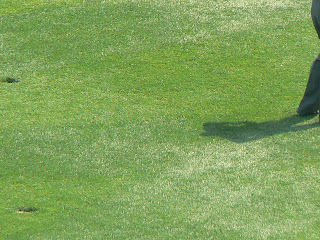 From 40-something feet up, you have a good view of the drains just past the infield. 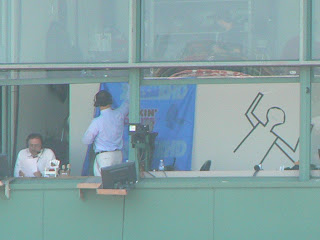 Rem and Don, and some kind of body outline. Castiglione? He seems to be MIA.... 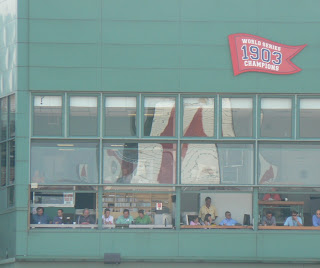 The Citgo sign, reflected many times, each one cooler than the next. 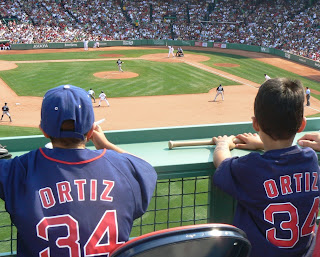 These two Ortiz fans look on as David bats in the eighth. 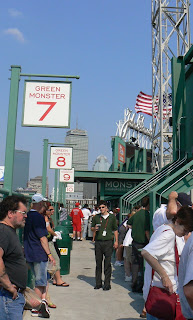 The Pru from the back of the Monster seats. 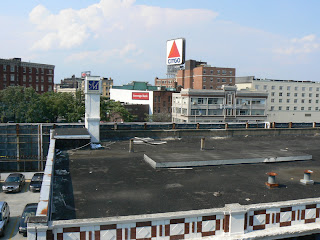 It was so windy up there, you had to hold your hat, like on the Flume at Canobie Lake. One kid lost a five-dollar bill. After it flew up and out, it floated down to Lansdowne Street. A lone dude was walking by as we all yelled down to him. Money! Right there! Left, left! Cold, colder, warm, warmer....look down! This guy just wasn't seeing it. He almost gave up, but any time he'd try to walk away, we'd give him the "trust us this is no joke" yell. He finally saw it, picked it up, and yelled up to us, "Thanks," before continuing on down the street. My girlfriend gave the kid who lost the fin a couple of bucks.

Lugo basically did the Tavarez-bowl on a grounder today. It's a pretty safe move, I have to say, as long as you get enough mustard on it. (Yes, I know some shortstops were big on purposely bouncing throws to first, but it was usually done on turf.)

I'm still frustrated by all the resting. Look at this game--it's the type you say, If our lineup had a little tiny bit more to it, we would've won. Well, a third of it was on the bench! We heard that Tek got banged up the day before. But he couldn't have pinch-hit? Drew was basically given an extra day to make sure he's okay. But they said hitting wasn't a problem. So, again, no pinch-hit? And Pedroia? Are we just giving Cora some playing time? Because he needs to stay fresh? Because million-dollar athletes can't do well if they don't play for a few weeks? So, lots of rest is bad, and no rest is bad. How about we just play nine guys and realize that they're not babies and that there are plenty of built-in days off throughout the season (including a three-day vacation last week!) as well as five months off every year?

It also says a lot about Wily Mo that in a situation when we need a homer to tie, and we've got Mirabelli and Lugo coming up, we still don't use him.

Comments:
You and I BOTH know that if the team that we love needs a clutch strikeout, all they have to do is put WMP in the batting lineup. He sucks! And in the field? No comment needed.
Your pictures were great, but with eleven hits, more than one run would have been the norm. I was sickened. But it was a beautiful day to be at the Park. I'm glad you had fun. Please let us know when we can pre-order that bestseller-to-be.

I also think the "resting" is bullshit...for all I hate Derek Jeter, he'd have to have a bone showing before he'd accept a "rest." C'mon guys! Man up! I think Tito was feeling that he could afford to do it because of the large lead, but in case he hadn't noticed, it's dwindled somewhat in the past few days...

Got tickets for Sunday's game, AND a new camera! Can't wait!

BSB: Can't wait to see your pix. Seriously, all this resting also, to me, tells other teams, "We've won the division, we can afford to rest people." We haven't won it yet! Play like it's a pennant race because that's what it is until we clinch!

the pic of the ortiz kids is a great one. are you on flickr by any chance?

Got to be honest, the "not batting Wily Mo" seems to be the final straw for a man who still can't seem to find the other "l". What are the odds he's still got a Sox jersey after the trade deadline? 10-1? Less?

Thanks, Beth. I'm glad the guy near me said something about the two Ortiz', or I may not have thought to take a pic. I don't do flickr. I just have my whole collection in my computer and put up the ones I want people to see on this blog. I have noticed that there's a photo limit on Blogger. I'm at 20% of what I'm allowed, and it goes up about 1% with each gallery I do. So, somewhere down the line, I may have to start using flickr or something.

Cameron--yeah, it's too bad about Wily Mo, but there's not much point in having him on this team. Maybe a team who can afford to play guys "just because they need to play to become good" regardless of how bad they do until they get good can take him off our hands.

In general jere, I think tito's done a pretty good job with assigning days off this year. While it may have appeared that way in this game, especially for us in the stands sans internet info, there really hasn't been the mass resting on Sundays that we've seen in previous years. three regulars were off sunday, but all injury-related (I just read that Pedroia had the flu). These things happen, and frankly I'm pretty confident in Cora and Hinske and always glad to see them get playing time. And yeah, maybe he should have put 'tek in to hit for dougie in the 9th, but apparently the reason he was out was that the swelling in his thumb made it difficult to grip the bat.

Beth, those two ortiz fans were only sitting together for a short time, and when papi came up, jere's girlfriend said "wouldn't it be cool if he got a double" and HE DID.

I been to the top of the Green Monster and noticed that the Citgo sign seemed to be so far away, but when I watch the games on TV it looks like it's sitting BIG, right behind the Monster. Your picture reminds me of what I saw and how I felt when I was up there.

The key is that it's a monstrous sign. 60 feet tall, 60 feet wide. Just look at the building it sits a top, and compare it to the size of the windows--it's many stories high.

So just picture if in my shot, the camera panned back, so that all of Fenway came into view, and there would be the sign, still there, over the Wall. Think of it this way--the sign is about 1000 feet from home plate. The wall is 300 feet from home plate, and the sign is behind the wall atop a five (?) story building, plus 60 feet above that to the top. So you're gonna see the thing.

Even knowing how far it is from the park, I once saw Canseco (while on the Sox) hit a homer that appeared to bounce off the sign! Would've been a 1,000-foot shot...