Dad's Day '07. Note: The pics from when we went on the field after the game will be a separate post tomorrow. Click these to enlarge. 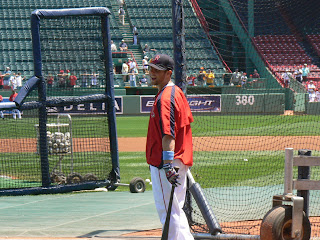 Dustin Pedroia in BP. The Pedroia/Hinske/Cora group closed out BP instead of the Papi/Manny/Lowell group (formerly Papi/Manny/Millar), so that's all we saw of the Red Sox portion of BP. 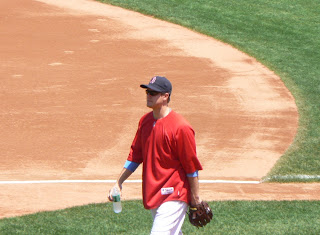 Then we spotted my cousin and uncle up in their sweet seats, and I took a few shots from there, including this one of Papelbon. Note the blue on the players throughout, done for prostate cancer awareness. 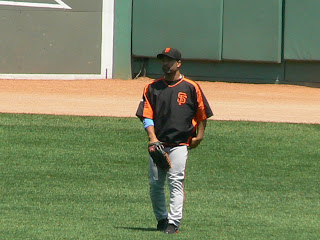 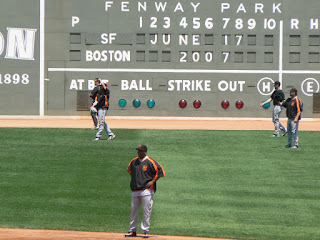 Barry Bonds hung out in the shortstop zone for a while in BP. 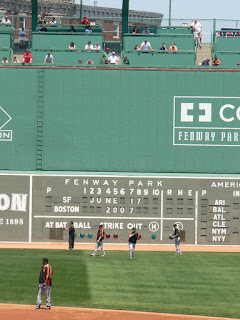 Here he is looking back at the Monster, and how he's totally gonna ignore it and just try to pull balls to right. 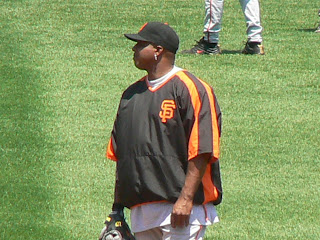 Here's a close-up of his huge earring. 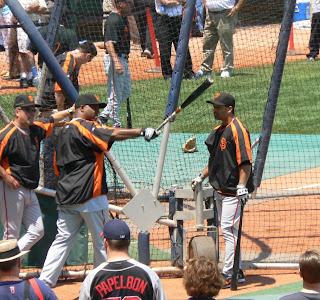 Bonds seems to be calling the shot he'd hit later in the game to Dave. 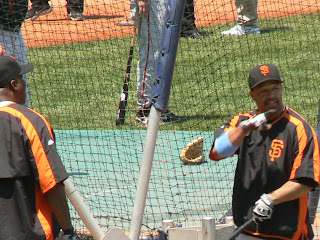 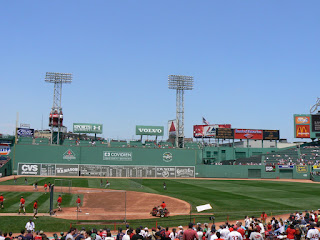 It was a gorgeous day, even a little bit hot when the sun wasn't behind clouds, which came in later. Much different than three nights before, when I shivered through the whole game. 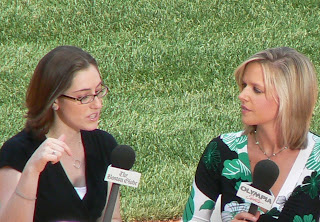 Amalie "Ice Cold 3000" Benjamin, and Kathryn Tappen. Then we went out to our real seats in the bleachers. 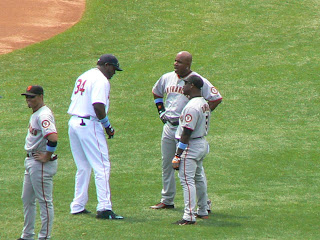 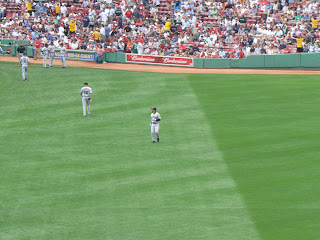 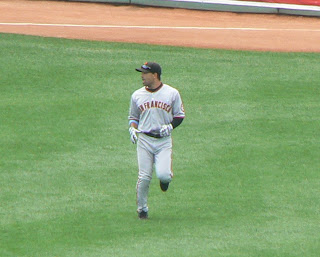 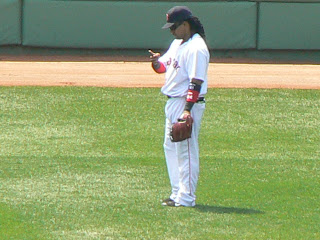 The game has begun. Manny is back to non-high socks, while Lugo went to high socks. Manny hit another bomb (I seem to see a lot of those live), and while high-fiving the fans by the dugout afterwards, he hugged someone. I zoomed in on the spot (the Affleck seat), and saw a little girl. On the replay of the game, I didn't see the hug, but I saw that they showed those people, saying they's won those seats from Tom Werner. So that was a nice day for that family.... 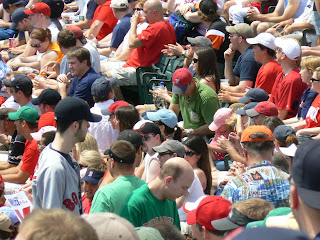 Tall, lanky, dark-haired dude with Pedro jersey. The Broseph? I think it was him! You can see some scattered Giants gear in this pic. There were so many Giants fans there. "Let's go Giants" and non-sarcastic "Barry" chants coming from the grandstand and everything. I remember when I saw the Dodgers here in '04 they also had a huge contingent. Must be a mix of the east coast Giant/Dodger holdovers from their New York days and people who came from out west to see their team at Fenway for the first time in their lives. 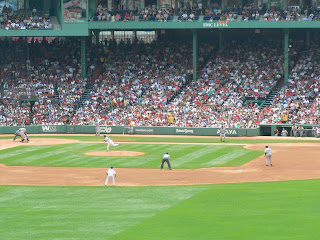 Wakefield delivers, with Bonds on second. 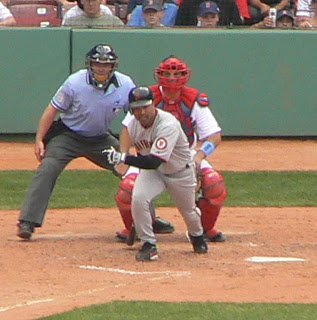 Dave Roberts, quick out of the box. We also got to see him steal second. Pretty cool. 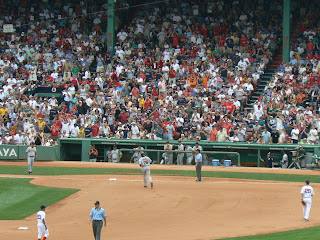 Bonds finally got a hold of one on Sunday, although it looked like a pop-up. Drew kept drifting back, and it landed in the bullpen. 748. This shows you more of the Giant fans. One sign says "My Dad's a Giants Fan. Go Giants." (TJ--My best friends and family are Yankee fans, but I'm not gonna root for their team on, uh, Friends and Family Day.) There's also a "Bonds Uses Steroids" (or something) sign at left, and a few asterisks up there, too. 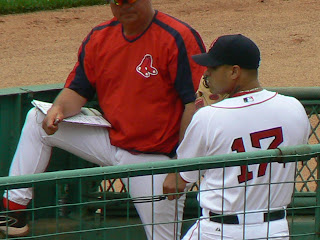 Millions of Dead Carmen, with his temporary, blue-ribbon neck tattoo. I was surprised we put that game in the hands of young Manny, but it all worked out. 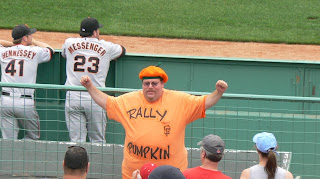 What the hell is this? I'd say the Hennesee Messenger definitely came to this guy's house, if ya know what I'm sayin'. 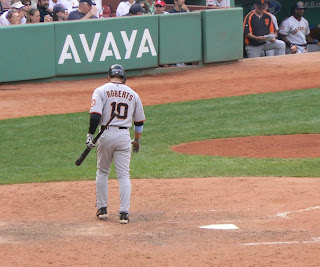 Enough people had left by the eighth that we found seats down by where cousin Amy and Uncle Bubs were sitting. Here's Dave at the plate from the sweeter view. 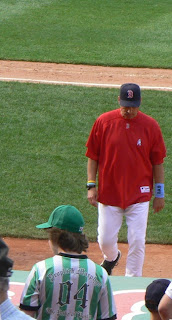 I was just taking a picture of Tito, but just now I noticed the Dropkick Murphy's kid, so I cropped accordingly. (Note Tito's "DAD" on his wristband.) 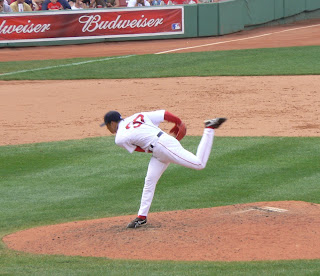 The crazy delivery of the Mighty Oak. 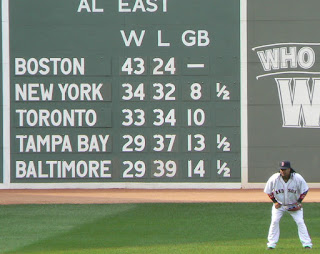 Manny, and us in first place. 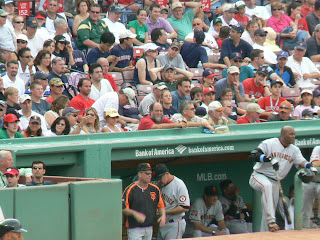 Barry on the dugout steps. I felt like the crowd didn't care too much about Barry, just like I didn't. There were definitely people who went all out with signs and stuff, but only a few. I think this pic shows how the reaction to him is: Take his picture, and then just forget about it. That guy leaning back, arms behind his head? That's my take on Barry. My girlfriend went Friday night, and she reported the same thing: Booing, but not crazy booing. The Giants announcer even said during an interview with Castiglione that what he was seeing at Fenway was nothing compared to what the Dodgers and Padres fans have done. And I'm really glad about this. I just feel like those are the teams who should be mad, as Bonds' cheating is beating them, while, as a Sox fan, I know my team never even sees the guy. The only time I started to change my tune, just a little, was when the Giants fans in the bleachers would really start to cheer him, as if they just don't care that he's pretty clearly a cheater. At that point, I was more like, "Let's strike this bum out!" If I were a Giant fan, I wouldn't go out of my way to cheer him. But that's just me.

People taking pics of Bonds, who was on deck when the game ended. 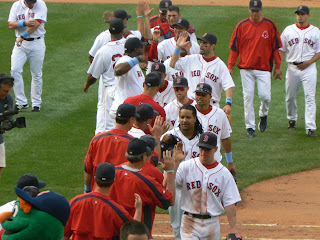 Nice view of "the line" coming right at us. 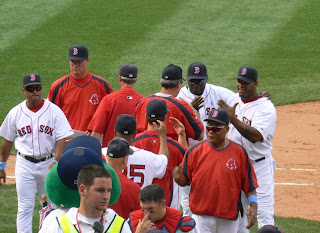 And here's Papi and friends doing some secret handshakes. Papi had a ground-rule double in this game that bounced twice before going over the wall! 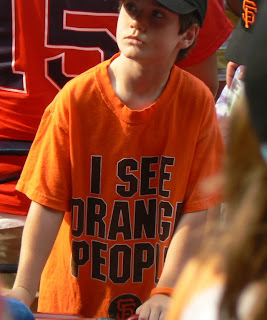 After the game, we kids (ha) and our dads were allowed to go out on the field for a catch. Pics of us on the Fenway field to come in a separate post, so watch for that.

Comments:
Great pics, Jere. We're missing Roberts down here in San Diego, too. I'll be at the Sat. night game next weekend with my camera in tow.

Cool pics! I laughed so, so hard at the rally pumpkin photo/comments. I like orange, too, but only as a friend.

Great commentary & pictures ... I can always count on some good stuff here after you have been to a game !

Thanks, I appreciate it.