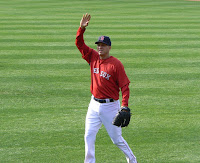 My girlfriend and I got to see Dice's sweet complete game victory tonight. Here are some photographs from the evening, copyright Me, which should be clicked for the purposes of studying in a larger format. It was a beautiful day that had an ulterior motive: to remind us that it's still May in New England when darkness fell. 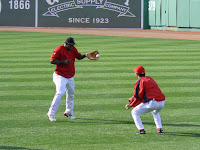 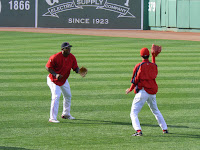 Wily Mo and Oka-"Jeemer" play a form of batless pepper. 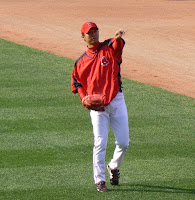 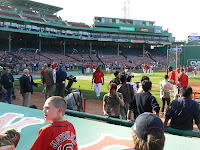 Manny in the middle. 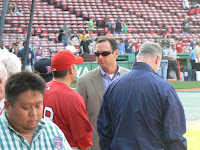 Inge and an Inge fan. 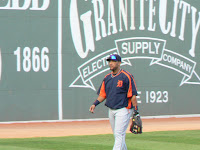 Shef was booed when announced. 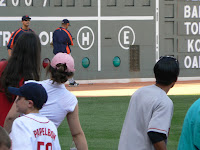 A dude in the Monster seats dropped his sunglasses 37 feet. 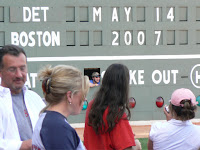 A Tiger coach was hiting balls off the Monster for carom practice. He hit one ball right into that Carlton Fisk '75 camera hole, on the fly. It was amazing. Then this dude, who got an unexpected surprise, popped out.

Tiger dudes. The girl in the orange hat? Sam! I'd spotted her earlier, so I went back here and got some shots of her doing what she does best: taking pics of Tigers. A moment later, she turned around to find me. Turns out, she was with Iain (also in above pic, left of Sam), Beth (also in pic, right of Sam), and Amy. I'd met Samara before, but it was good to finally meet these other bloggers, albeit briefly. Although I didn't even realize who exactly I was talking to at the time, except for Iain. In fact, I'm not quite sure if Amy is the same one from Red Sox Bat Girl or what. Maybe someone can fill me in on that. 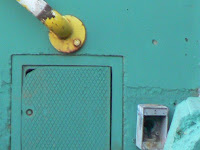 To completely change the subject, here's a close-up of the right wall of the visitors' dugout. 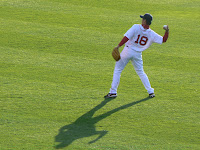 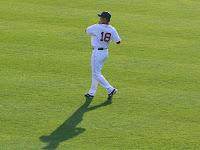 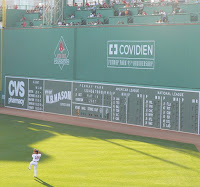 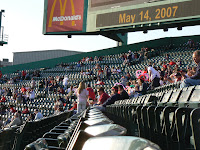 From the area of the 10-game plan seats, on the far edge of the bleachers, looking out toward center. 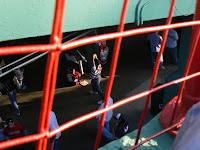 Like I said, I'm at the edge of the bleachers, so I can look down into the Big Concourse. Here's a juggling dude. 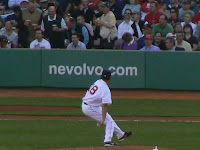 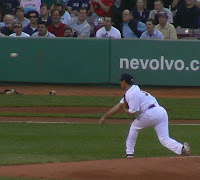 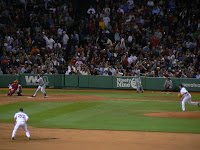 Dice pitching in the ninth. 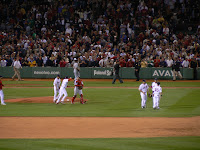 Tavarez rushes out to celebrate the win. 8.5 games up on the Yanks.

Comments:
Note: Fisk-cam could've been in one of the slits, as opposed to the square-hole.

Nice email in the middle of the night...I have my email synced to my cell phone so it beeped at whatever time it was, and my wife said, "Who the fuck is that at 1:30am?" I looked and said, "Oh, it's Jere; he's watching the replay of the Sox game and noticed an odd seating arrangement between Kapstein and Drinkwater..." And she goes, "You guys are fucking dorks..." And she rolled back over and went to sleep. And I was left wishing I had NESN so I could watch the Sox replay in the middle of the night...

& I'll be in Outfield Grandstand 3, Sunday & another Dice K Performance.

Ha, it looks like Fernando's jawin' at me. If he had been, it doubtless would have been something along the lines of "Aaaargh that orange! Also get your camera away from me."

Love that first shot of WMP and Okaji! Wily Mo looks like Okaji has just tossed him a live snake.

Nice notes on the sunglasses and the startled guy in the Monster. ^_^