Some Obzies About Last Night

I was at the game last night. Fun. Did you notice that at one point the scoreboard was exactly symmetrical? After five, we had: 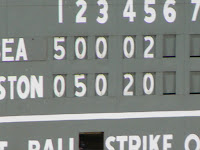 I just thought it was cool that the non-zeros were in places that made the whole thing symmetrical, but then I realized that since they were 5s and 2s, if you digitize it, you get: 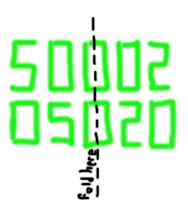 Wrap your head around that one, Mnookin!

Now, about Manny's eighth inning homer, pictured in all its chaos here: 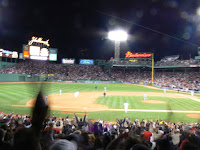 Did Manny think it was the ninth inning? The celebrating going around the bases had "game-winning homer" all over it. Then he got to the dugout and did the patented* Red Sox helmet flip and jumped into the non-existent pile. I really thought maybe he was thinking the game was over, and that the rest of the team was messing with him by not coming out onto the field to meet him at home plate. But he had to have known by the fact that the Mariners weren't walking off. Maybe he was just letting us all know "this long, long game is over NOW. This is essentially the game-winning homer." (That's some confidence in J.C. Romero, Manny...)

The Ortiz mid-play hug was awesome. What a great reaction by the crowd. Not often does a home player getting tagged out in a rundown end in an explosion of joyous applause.

And what is Dice's deal? He's like Oprah. "I'm fat, I'm skinny, I'm fat..." Only with him it's "really awesome" and "totally shaky." Yet in the end, he's always there, and we always pull it out. And he's the richest woman in the world.


*yes, that's ours, as is Sweet Caroline. Imagine someone else doing one of your team's traditions and then hearing their fans say, Oh, anyone can do this... Oh, and George, once again, all the Mientkiewiczesezeses in the world aren't gonna win you that 2004 World Series. That's ours, too! Give it up, man.

Comments:
I'm gonna put a disclaimer on this one. I wouldn't want a new reader to think I'm one of these guys that makes fun of Manny. Or worse, for them to think I'm in their crowd: "Hey, I think Manny's retarded, too! Woohoo." It's not like that. This blog has defended Manny at all times. I'm a huge fan of his, and I don't get into too-easy accusations of his non-problems. It just really looked like he thought it was the ninth. This doesn't mean I think he's some dumb guy, like most people seem to. I love Manny! If he didn't think it was the ninth, and he was just goofin' around, well, I love him for that! Quit grillin' me under these hot lights!

After having seen the replay now, where he very casually gives the low five to Hale rounding third, instead having a surprised "where is everybody?" look, I know Manny was just super-psyched. He knew exactly what inning it was. He was just new-boot goofin'.

OR, he could just be a big dummy.

Sorry, just trying to be affable. ;-)

Am I annoying yet, or what?

Ethan had an awesome Little League game the other night. Three extra innings. Ethan was on third base, about to make the winning run, but the batter got out at first. The game was left a tie because the lights on the field were about to be shut off.

It was nice to see evenly matched teams so far this season. His team got beat up pretty bad last year.

Will you be at the June 17th game against the Giants by any chance?

Nice job on the affability, not annoying at all.

Can't they just keep the lights on a little longer if the games' still going on??