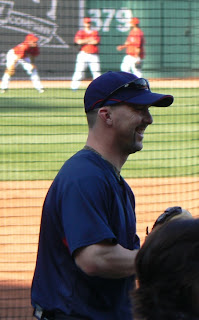 It was my mom who thought of it first. The day it was announced that Trot Nixon landed a job with the Indians, she beat me to it: "When's the first Indians game at Fenway Park this season?" 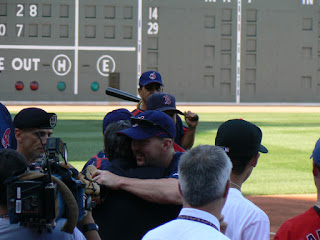 So I found us the perfect seats, which she treated me, my girlfriend, and my dad to. Little did we know then that the four of us would have as perfect a Fenway night as you could ever hope for. Above: A smilin' Trot, and Trot hugging Kapstein. 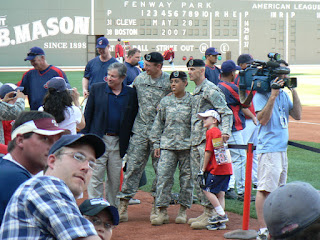 And here, the Kap'n poses with some military types on this day of Memoriality. My mom wanted to say hi to her new friend Jeremy. I told her he'd probably be on the field, greeting Nixon. Sure enough, he was the first guy Trot saw when he came out of the visiting dugout. 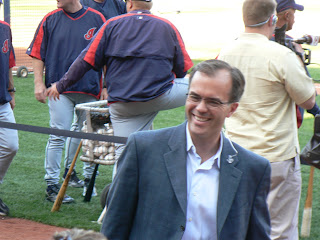 Here's TC. Anyway, she didn't say hi to the Kap'n after all. Maybe next time.

I pulled out my old Nixon T-shirt for this game. It was incredibly wrinkled, as I'm not the best folder. So I asked my girlfriend if she'd assist me in ironing it. Okay, first I asked her if we had an iron. Then I had her show me what to do. It's just like on TV. You push it around and the wrinkles come out. That's right, I learned to iron for Trot Nixon. 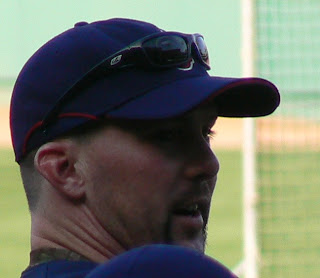 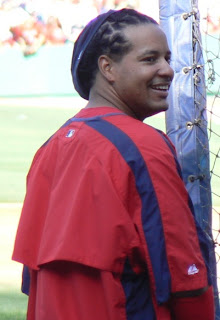 You should've been clicking these to enlarge all along... 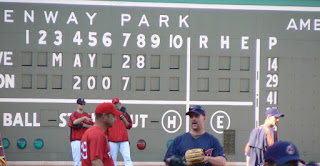 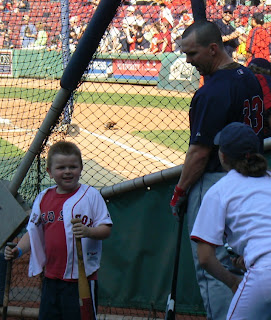 This kid went up to Trot, took off his outer jersey to reveal an old Trot Nixon Red Sox T-shirt. Then he got his picture taken with Trot: 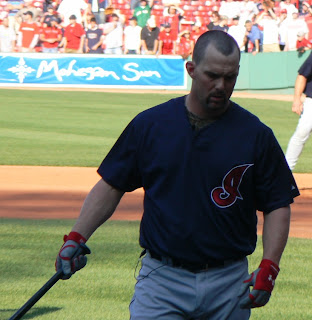 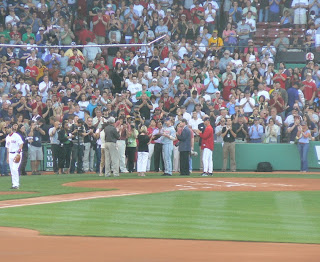 Above, Trot and his wife are honored for their charity work for the Jimmy Fund. They showed a tribute on the scoreboard, and she got to throw out the first pitch, while weeping uncontrollably the whole time she was on the field. 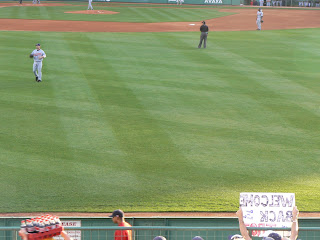 Signs welcoming Trot back were everywhere. 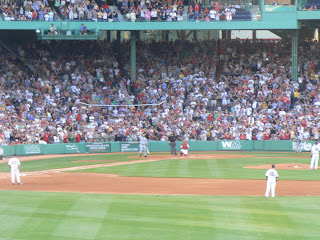 We got seats in the heart of the T-Zone, twenty rows up the bleachers behind Trot. I was psyched that we'd get the bonus of getting to cheer him as he ran out to right field. It was a perfect night weather-wise, which made for a fun night in the bleachers. Party atmosphere. My dad, who is very proud of the fact that he has way more fun watching games from the comfort of his living room, even had a blast. Between watching the sleepig drunk man in our section, and watching the Blue Jays put run after run up against the Yanks on the Green Monster scoreboard, it was non-stop entertainment. 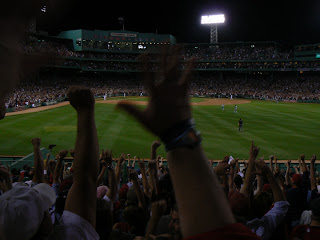 Oh, and awesome things happened on the field. Above, Kevin Youkilis emerges from a giant hand, after crossing home plate on an inside-the-park home run (!) The Manny blast got out in a hurry, that was freakin' cool. Pedroia with three more hits, and he's up to .298. The averages in May are pretty damn good. I forgot to mention Drew's key hit yesterday, and he had another today--maybe my Nixon/Drew motivation theory will be correct. Lugo continues his "invisible man"-style stolen bases. Except for Papelbon having a little trouble, it really was the perfect night. But I think we all willed Pap to get through the ninth. We'd decided we weren't going home sad. 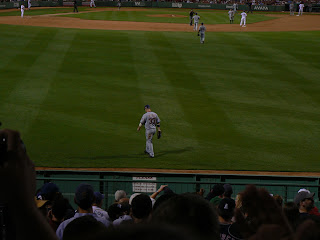 One last shot of Trot out in right. I'm glad I got to welcome him back. (I'm also glad I was there for his last game.)

I even kept track of the Devil Rays' game, knowing that if they won, they'd tie the Yanks for fourth place. They went down 5-2 to Detroit, and it didn't look good. When we left, the board still showed them down 5-4 in the ninth. But hey, the night was perfect even without a D-Rays win. We got home, and I'd kind of forgotten about it, but the score caught my eye at the bottom of my TV screen: 6-5 Tampa Bay. They did win! Yanks officially tied for last place, 13.5 behind us. No team in baseball is further out of first place than the New York Yankees. (And the cheer that went up when their score went from 4-0 to 7-0 was beautiful.) Pure, 2004-karat gold. Or should I say 2007-karat gold?

Comments:
Jere, it sounds like that was one night of your life that you'll NEVER forget...parents, friends, Trot and the Sox. And I must say to your readers who have NOT been clicking on each picture to enlarge them, you're missing out. The resolution is so precice and the pics are so great. Thanks Jere...I'm so glad you had such a tremendous night. Peter...hi to your parents, too.
Tonight it's Jsh time...I hope he can take off JUST where he left off. Would that be loverly, as your Mom would say!

It looks like you were right behind where we were!

I'm so happy you got to see that!

beazer--We were way to the right of you: sec 41, row 20. In that one pic, that fence is the fence between the two bullpens, not the left edge of the visitors' bullpen. I think that may be why it looks like we were further toward the grandstand. We were actually in the triangle region.

Matty: All right, in home ec class in middle school, we did do a little. The technology was different then, though.

Peter: Yes, it was an awesome night. Will never forget it.

I was home, watching NESN at home for the 1st Time:

It was a Grand Night, indeed, especially thanks to Youk & all those Trot Memories;

& give me Coco over Johnny Demon anyday.

This is Jere's Mom:
Dad and I were toolin' down the Mass Pike playing with the radio dial when we heard the Devil Rays final. Holy maroly! Cap-off to the perfect night indeed.
Peter: thanks for your ongoing good wishes.
Matty: Jere grew up in a house where the iron was a rusted mass. Nothing got ironed but I wrote nine books.
Michael: Ditto.