Thursday, I thought, Hey, We're going to CT on Sunday anyway, why not go Saturday night and see a Pawtucket game on the way? Turns out they were at home, and tickets (which you can choose the exact location of) were available--and only cost 10 bucks for the sweetest seats. So my girlfriend and I took our first ever trip to McCoy Stadium. 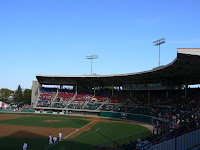 McCoy is a lot bigger than I thought it would be. I've been to some tiny minor-league parks, and I thought this would be the same. 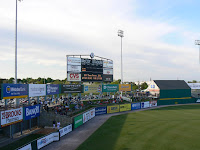 Was a nice day in the rare state of Rhode Island. 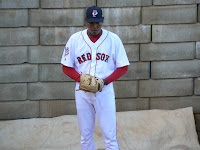 Almost right after I bought the tickets, we heard Hansack was sent down. After that, we heard he was starting for the PawSox Saturday night. Our night. Sweet. 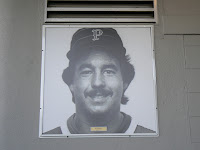 The park features huge pics of past PawSox. Here's Al Nipper, carefully placed below a vent. 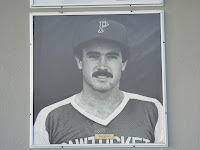 Here's quizmaster Reid Nichols, one of the many stars of that Red Sox puzzle featuring the '83 Topps cards. Why was that the only year they made a puzzle of Red Sox cards. Note Reidy-Deidy's uniform. I once saw one of these on ebay. The seller claimed it was "game-used," to which I thought, There's no way they would actually wear those mesh shirts as actual uniforms. Apparently they did. 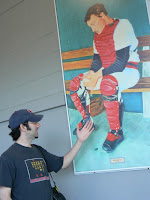 Some of the huge pictures are actually artists' renderings. Some players came out more, uh, "real-looking" than others. For example, Mo Vaughn looks like a cartoon. Above, some dude admires a very sad-looking Rich Gedman. What's that in his hands, a dying dove? (I also got a shot of my girlfriend in front of the Morgan Burkhart picture, as she's apparently his biggest fan.) 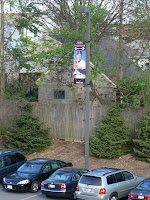 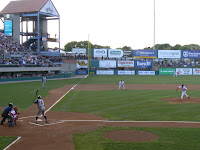 'sack delivers to a Hen of Mud. 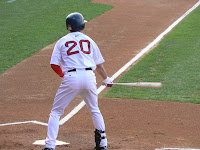 Some PawSox at the plate. Ellsbury above. 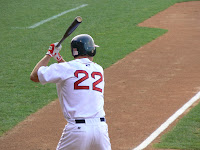 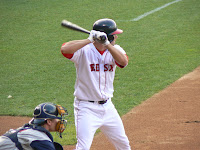 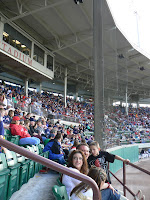 We were just to the right of the screen, in the second row. 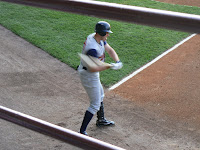 The Toledo on deck area was right below us. 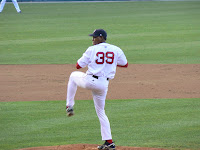 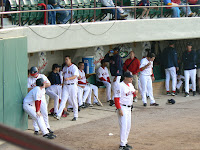 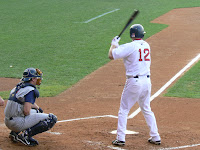 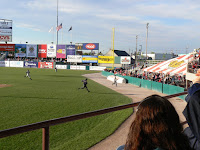 First baseman going for a popup and missing. 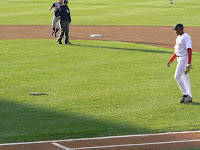 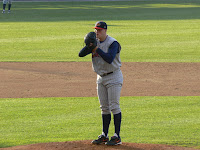 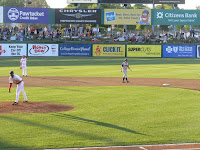 Hansack's shadow taller than his soul. He pitches well for a few innings, then did a little bed-shitting. If I had to make an excuse, it was the incredible sun shining right in his face while he was in the stretch. 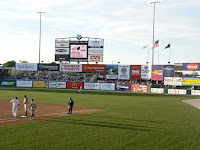 More long shadows. We were getting an awesome sunset. At this point, I really focused on capturing it. 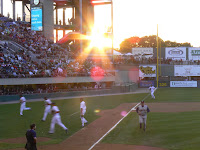 The sun never sets on Hansack Nation. Until a few minutes after this photo was taken. 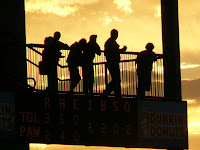 I totally fell in love with the sight of the shadowy people right in front of the Earth's yellow sun. 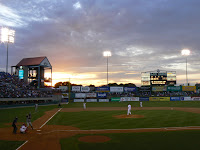 Craig Hansen also pitched (above, in a shot that shows us why baseball is the best game), as did Bryan Corey and Mike Burns. Oh, and Timo Perez was the MudHens' DH... 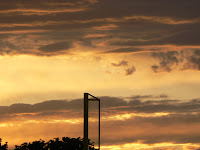 The sun sets behind the right field foul pole. 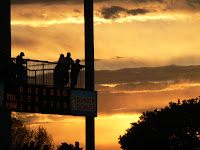 Okay, on the terrible job front, get this: After six innings, we all were told to stand for a singing of "God Bless America." Okay, whatever, at least they're not putting it into the seventh inning stretch like some teams I know. But then I thought, that's weird, having us stand after two consecutive half-innings. So the top of the seventh ends, and they play some ad or something. After it, they do play "Take Me Out to the Ballgame," but nobody says anything about stretching, and nobody stands up! Above is a picture I took during the song, with only a select few people even standing, let alone stretching. This is a travesty. TJ, Pawtucket. I hope this isn't a trend. (But is it worse than having "Coca-Cola presets the 7th Inning Stretch"? Like the grub at the various Chicagoland correctional facilities, "they're all pretty bad." 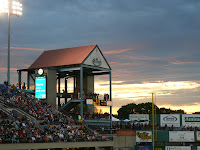 Comments:
I guess back in the Reid Nichols Era the PawSox' uniform budget was no bigger than the town's Little League program.

I went to a game at McCoy back around 2001. You're right, it's a pretty big stadium for the minors, although I've been to the Durham Bulls' new park as well, and that's pretty huge.