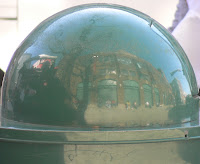 This was the make-up date of that first Thursday game that got rained out. Here's the front of Fenway reflected in a refuse receptacle. I'm the person on the left in front of the middle gate. Click these new-boot goofers to enlarge.

The M squad was doing some wacky circle game in BP. Papi observes. Low-Ell Pineiro observes something else. 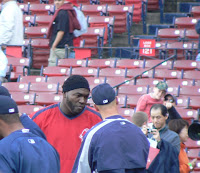 David Ortiz. I like the dad pointing out Papi to the kid at left. 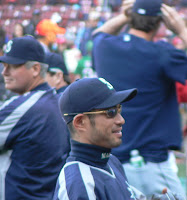 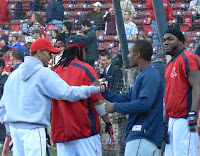 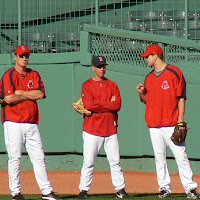 Just discovered the digital zoom on my camera. (TJ, me!) This was taken from above the third base dugout, and as you can see, they're clearly in the triangle. 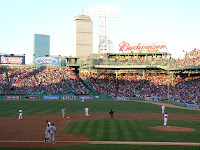 Was a nice night, until about halfway through the game when I started to shiver at a constant rate. 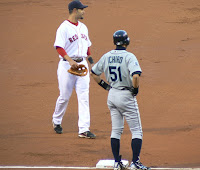 Ichiro on third base in the first inning.

Battle of dudes who hail from Japan. 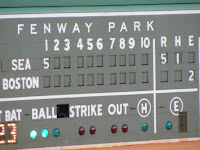 You don't see this every day. In fact, has there ever been a five run, one hit, first inning before? How 'bout it, Elias? 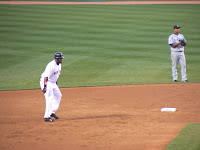 Papi on second from my section 26, row 1, seat 1 position. The oblivious-to-those-around-him doof-wad in front of me may have annoyed me for much of the game, but it made it easier knowing he paid $85 and I paid $45. 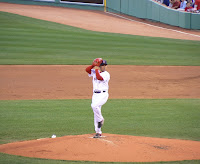 Dice in the wind. 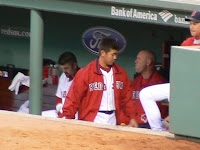 I rarely have an angle on the Sox' dugout. But I would on this proverbial night. 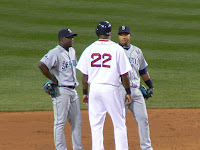 Wily Mo was four for four. 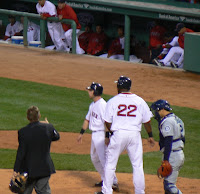 Confusion as Wily Mo and "Dust, Indiana to Pedro, Iowa" both cross the plate, but both are not allowed to score as the ball hopped over the wall for a GRD. 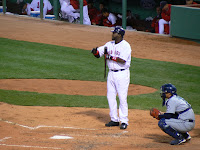 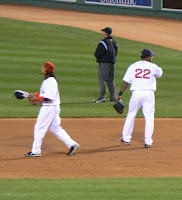 Youk almost makes the catch leaning into the dugout. 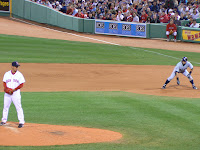 Dice with Ichiro on first. 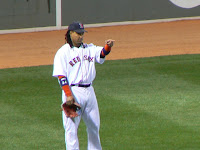 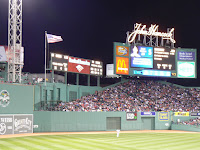 You can see how stiff the wind was. Manny's first HR looked way out. I was surprised it barely cleared the wall. And I don't know how he go that second one out. Several balls were knocked down. I had a great angle on this. You could really see the flight of balls hit toward the Monster change drastically and then get caught. Dust, IN - Pedro, IA. Were you still trying to figure that one out? Too bad the towns don't actually exist. I was just new-boot goofin'. 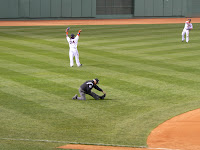 I'll leave this caption to you, the reader. More on this game below.

Comments:
"How did James Brown DO this!?"