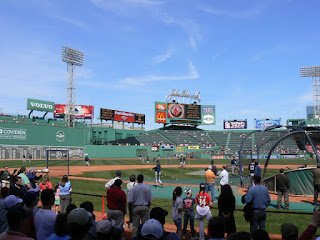 It was a really nice day at Fenway on Saturday, as the Sox would take on the Yanks in a 3:55 Fox game. 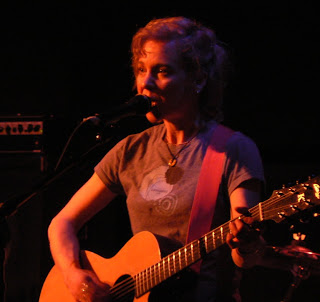 The night before, my girlfriend and I went to see Kristin Hersh. We got screwed up on the time of the show, and got there in time to see her last three songs. It turned out to be a B.I.D., as we then got to hear the last two innings of the sweet comeback win in game one of the series. Now back to Saturday. (click each pic for you-know-what) 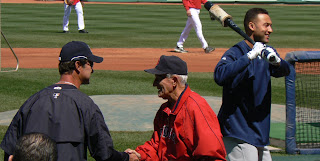 Pesky made the rounds before the game, greeting different Yankees, including Don Mattingly, above, with Jeter at right. 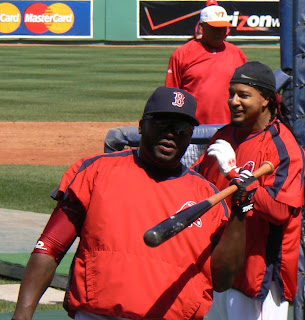 Papi and Manny, and Ino in a V-Tech hat. 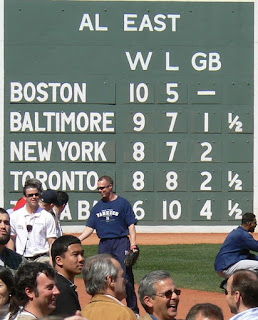 Lucchino, Lupica, and Cashman. And the Sox in first.

He who slapped the ball and he who supposedly held the ball. (I believe Pesky did nothing wrong. But I wasn't there, as I was almost negative 30 years old at the time.) 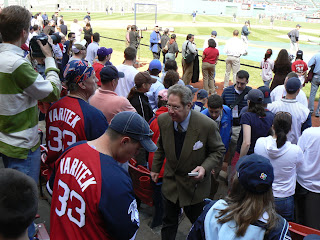 Sterling was on the field, interviewing Torre. You could actually see the pomposity emanating from him. Then he walked up our aisle. Check out the shirt/tie/vest/jacket/ handkerchief look. Oh, I was at this game with Empy, who also took photos from, like, the same spot. 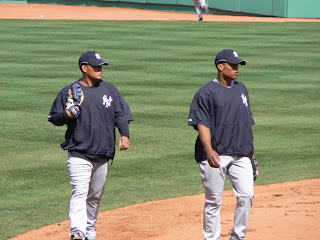 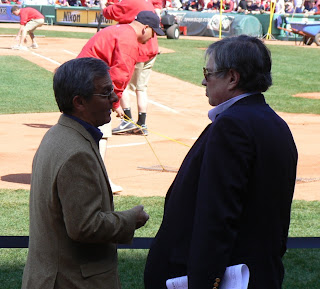 The Kap'n, Jeremy Kapstein, was all over the place on this day, shootin' the shit with everybody. Here he is with Mike Lupica. I guess they both could be called "the Lip." 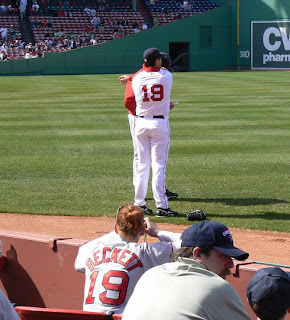 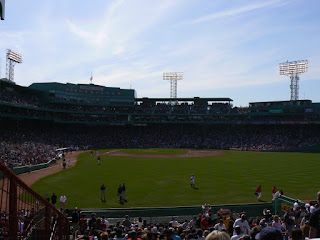 The view from my 10-game plan seats. Right on the edge of the bleachers, literally the seats next to the gap between bleachers and grandstand. 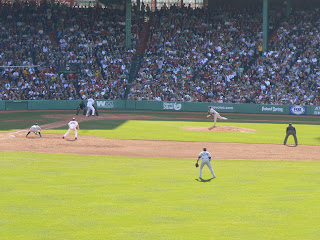 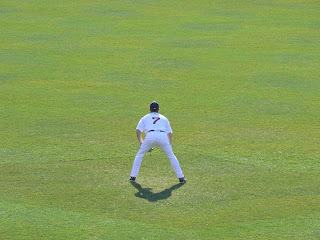 So weird that that's not Trot. You'll notice the '78ish shadows. The 3:55 start does that. For a 7:05, you get the sun field for a few innings, but with this new Fox start time, the bleacher people get screwed until the very end of the game. 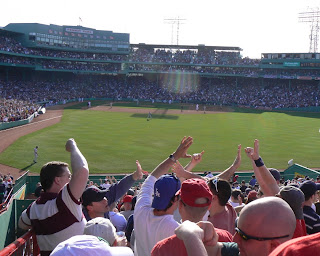 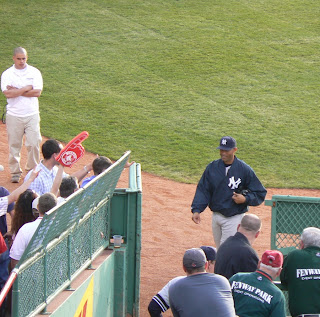 After Mo blew it again the night before, we gave him the old Fenway "we love you when you stink against us" cheer when he came out to the 'pen, which Mo always finds amusing. 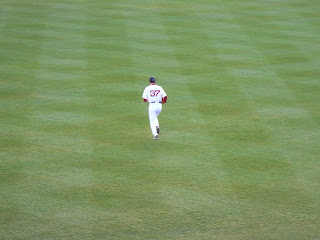 My nickname for Okajima: The Mighty Oak. That guy got a nice hand on Saturday after his fine performance Friday, and then a nice oe Sunday for Saturday. 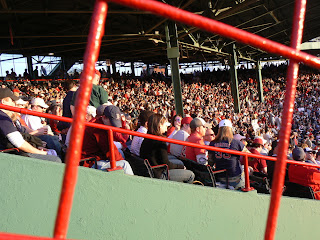 I love the right field grandstand fans. Always starting clappy-clap chants and knowing exactly who deserves cheers, while the bleacher drunks are trying to start waves in key moments of the game. Here, they all shield their eyes from the killer sun in its final moments. 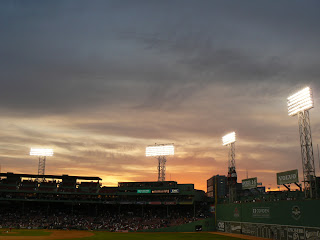 The sunset after the sweet win, which Pap saved. Pics from Sunday and Monday to come soon.

Comments:
nice pics! nice game to be at, too.

Thanks. It was awesome, yet still didn't compare to the extra-awesomeness of Sunday's game, which I also went to.

Do you think Kristin Hersh used to walk around the Donnely/Hersh house crying "Tanya, Tanya, Tanya" a la Jan Brady? I kinda do.

Yeah, somehow.
Someday they might grow up to be the baseball wunderkind that are Lugo and Crisp...
Like Epstein wouldn't give a nut each for either of 'em- but wait, Yankees rarely become Sox. If you need a ring and a step up, you'd generaly have to head in a southerly direction.
Nice site otherwise.

Glad you enjoy it.

The jury's still out on those two. Melky wouldn't even be starting if Johnny Damon, who got a ring with us and went to you and hasn't gotten a ring, hadn't started doing crappily.

The fact that you have to say "generally" in that sentence makes me grin ear to ear. When's the last time you guys won anyway? '04, right, oh no, wait, that was the year you had a 3-0 lead, three outs from a World Series, and you were the first team in history to blow such a lead. That's right? Was it '03--no, that was the yea you lost to the Marlins.

Oh, I know. 2001. Noooo, wait a minute.....that was the year when the great Mariano Rivera blew game 7 against yet another expansion team in the World Series. I give up. I know you won some in some other century, but I can't pinpoint when that was.

Where does this idea come from that Theo Epstien sits there pining for Yankee players? The came in and won a World Series right away. How can you people possibly be opening your mouths about this?