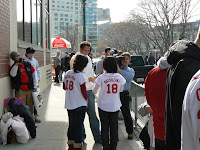 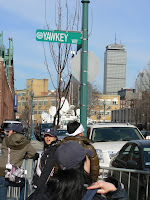 No, all Japanese people don't wear headbands. But they were passing them out before the game. At this point, Pat and I decided that if I kept taking pictures of Japanese people, one was bound to say, "What's up, dude, I was born and raised in this neighborhood, my name's Steve Chen," or whatever. So I stopped. You get the picture: Japanese people were at the game. 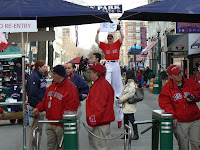 Nothin' says summer like your first sight of "the twins," the official ushers of RSF/PT. 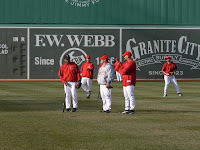 My first on-the-field Fenway shot of 2007. And I love it. So sunny and clear. By game time, we'd be freezing our butts off. 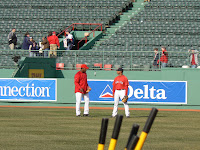 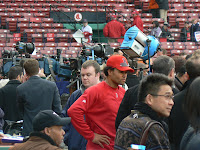 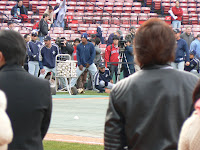 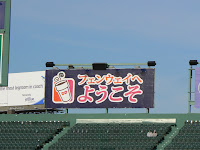 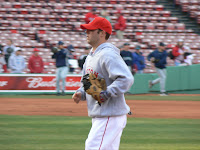 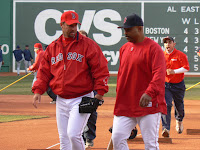 Two familiar faces. And a wacky one at right. 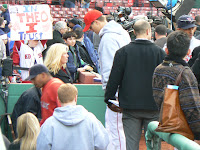 Does she think she's the last one? That's Papelbon entering the dugout. 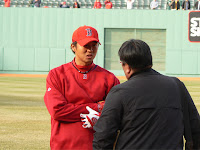 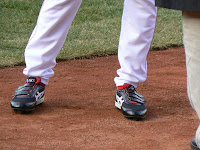 Pat pointed out he had Velcro cleats on. So they like the complicated two-sticks method for food-harnessing, but keep it simple when it comes to shoe-fastening, I guess. 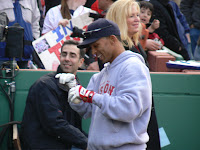 The fun-lovin' Lugo. This dude goofs around with everybody, on both teams. Seems like a fun guy. Which makes it that much more disturbing that he struck a woman. Terrible job on that, Lugo. I hope he doesn't do that ever again. 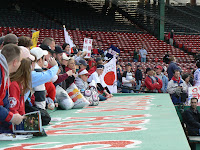 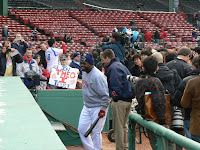 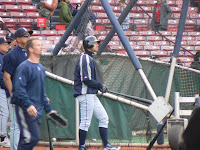 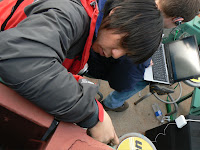 We got this sweet spot for BP, but there were so many media, they overflowed into the stands and got in our way. This dude tries to figure out the lock on this door to the media area next to the dugout. 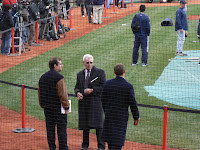 Gammons, lookin' pretty good after the, you know, thing. 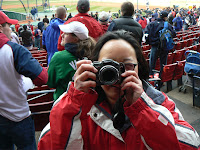 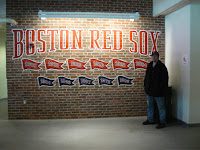 Me with the flags.

More to come soon. Including actual shots of Daisuke.

My mom points out that "Steve Chen" wouldn't work. Chen is Chinese. Japanese names have more than one syllable. At least she thinks so.