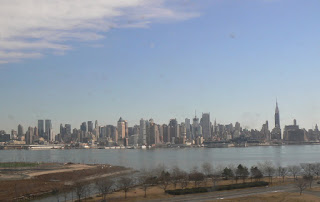 Another light-jacket day in the city, shown here through the bus window from New Jersey. Use mouse to control arrow- or Mickey Mouse hand-thing, putting it on top of each picture, to make that picture appear larger and alone. 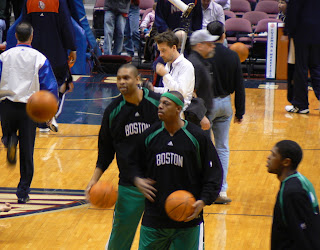 Paul Pierce is the most recognizable Celt, to me, so I got a bunch of shots of him. 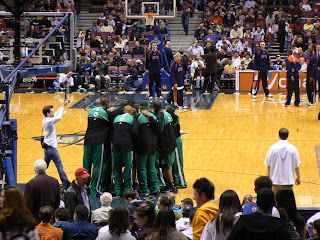 The Cs before the game. 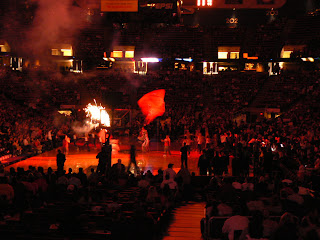 This almost has to sound tongue-in-cheek, but, seriously, if you like a whole lot of bells and whistles--and explosions--with your sports, the NBA is for you. It definitely gets tiresome--music playing literally on every possession, and party during every time out, with cheerleaders and dancers and t-shirt tosses and fire and confetti--but at least they're trying, and I'm sure a lot of people, especially kids who have no clue what's going on, eat it up. If you only go to baseball games (at somewhere other than whatever Comiskey Park's called now), see an NBA game once. 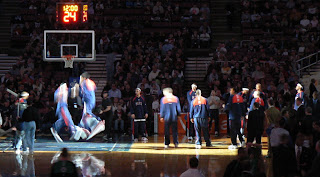 The fact that it's hard to take pics when you're in the dark aiming at a very well-lit area makes for some cool blurriness sometimes. Uh, I mean, I meant to do this. The Nets do these weird jumps into each other doing intros. This is Mikki Moore and another dude. 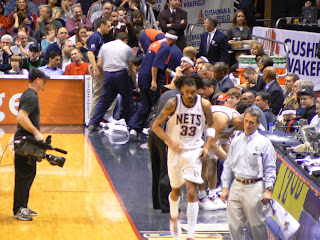 My boy Mikki! (Gains "my boy" status because I went to college with the dude 13 years ago, and now he appears to be an NBA star, and also incredibly looks like my old drummer, who also used to wear tank tops, was tall and lanky, and tied back his dreads sometimes.) 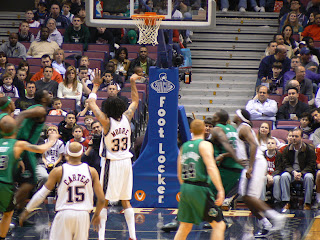 My boy Mikki at the line. (It's pronounced like Mikey, by the way.) 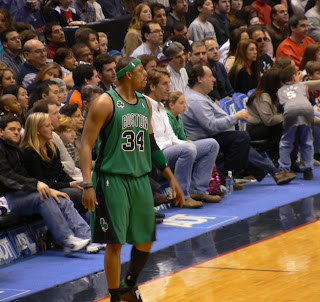 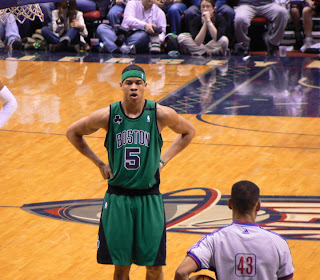 The slam-dunk contest champ, Gerald Green, at the line. I love the new (?) black on the Celts' road unis. I told my girlfriend this on the night of the dunk contest. She asked if this made me any closer to becoming a Cs fan. Maybe, sweetie. May...be. 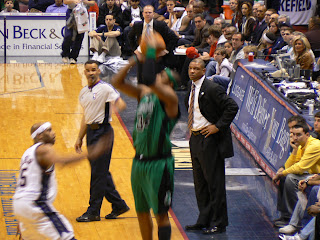 Doc doesn't seem to sure of this shot by Pierce. Paul missed a million shots in a row, and had 0 points close to halftime. But he eventually sunk some, and it didn't look so bad for him at the end. 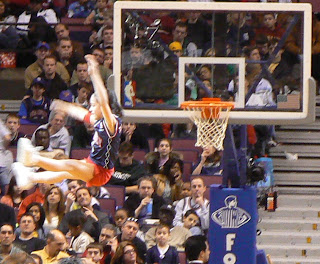 As part of kids' day, they had kid cheerleaders. Doesn't it look like she's being used as the ball? I should draw in some players trying to pull her down off the glass. For an offensive she-bound. Sorry. 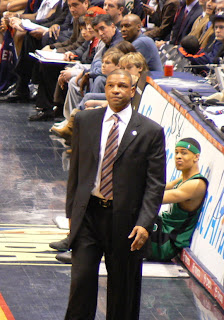 The looks on their faces sum up the Celts' season. Fe-bound? Okay, I'll stop. With a little over a minute left, the Nets were up by nine. I pulled out the camera, and thought it would be a good time to test the video function, thinking there might be some alley-oops in this blowout. As people were gathering their things and leaving, and me watching the game through my little camera screen, the Celts get a hoop and Chan says, "they always have to make it interesting..." I look at the scoreboard, shocked to see it was down to a three-point lead. But only seconds remained, and the Nets had the ball. They made two free throws, but the Celts quickly scored again on a three. They fouled again, and this time the Nets only made one, leaving the Celts with a chance for a game-tying three, which they got from Delonte West. It was captured by me below:

The Celts went on to win in OT. Wacko. 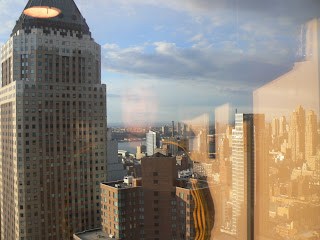 After the game, we took the bus back to the Port Authority, and decided to hang out in Times Square until we got hungry enough for dinner. Chan suggested we go into the Crowne Plaza to use their wicked pissers, so I in turn suggested we take the elevator to the top. (Hotels continue to rule with their "come in and do whatever you want and we'll assume you're a guest" policy. Terrorists: pretend you didn't hear that.) So we went to floor 46, and I took some shots out the window. Chan appears in the reflection of this shot. You can see Jersey off in the distance. In fact, that pointy building is visible in the first shot of this post, left of center. 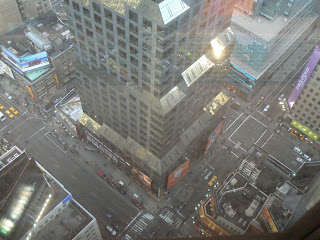 46 stories above Times Square. Then we went to Mary-Ann's on 79th and 2nd, in AJM's wife's former territory. Rumor has it they might be closing. The one closer to Chan and I already closed. TJ. It's pretty good Mexican food. Enjoy.

Comments:
I'm surprised you like the new black trim on the road jerseys; you strike me as an 'old-school' sort when it comes to uniforms. I was actually looking at Pierce and thinking about how much I don't like that "let's try to sell more merchandise to the kids" look. I remember thinking when the Mets pulled that cynical move that the black uni trend was way-y-y played out...and that was like, eight years ago.

Glad to hear you're warming up to the C's. Look at it this way: if Danny Ainge is even marginally competent (admittedly a big IF), then they've got nowhere to go but up.

The Mets look ridiculous to me because it's black and blue. This works for me, I just like the way the word Boston looks in black with a white outline with what seems to be a different green than before. I think the homes are the same as before? Anyway, it just looks good to me.

It's a shame these Celtics wear the same uniform as their 80s forefathers, and before that.

I just re-read this post, and realized that I was mentioned at the end of it (or at least my wife was). I'm honored.

Nice job on the re-read.