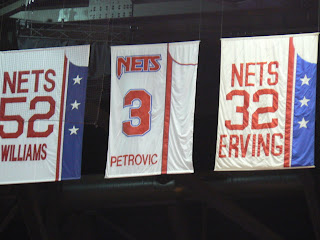 Some of the Nets' retired jerseys in the rafters of the former Brendan Byrne Arena. Buck Williams was the first star of the Nets for me. He was kind of like the Jim Rice of the Nets. Played most of the 80s in Jersey. Drazen Petrovic came later, while I was in high school. He looked to be on his way to finally bringing the team to the promised land, but he died in a car accident at the height of his career. Dr. J.'s time on the then New York Nets was before my time, but he did lead the team to this:

I was less than a year old when they won what would be the only championship won by my pro teams in my lifetime, until 2004. However, the Nets' joining forces with Steinbrenner and the Yanks and the Hell, No Network all but ended my tenure as Connecticut's only Nets fan.

A few weeks back, I saw a story on TV about Carlos Arroyo, the only Puerto Rican player in the NBA. He's a really good ball-handler, a Harlem Globetrotter-type. When I got these free Nets tickets, I saw they were playing Orlando, so I checked the Magic's roster for any noteworthy players. There was Arroyo's name. So I had someone to focus on, and to take pics of with my new camera. In the background of the above shot is my favorite Net, Mikki Moore, who went to college with me at the U. of Nebraska back in the early 90s. I still can't believe he's in the NBA. Why did it take him, like, thirteen years to get good? 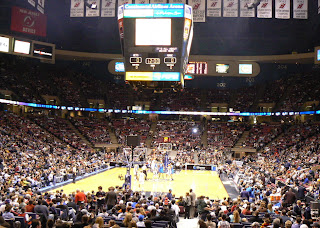 Here's the tipoff. These are 75-dollar seats that we usually get. Continental Airlines Arena is oneof those places where you can't sit wherever you want. You have to have a lower-level ticket to even get down there, so it's key to have those as opposed to upper deck. 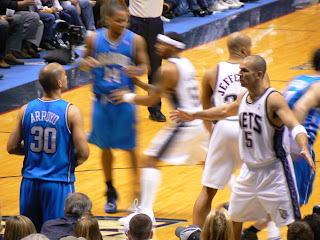 Here, Jason Kidd defends Carlos as he's about to inbound the ball. 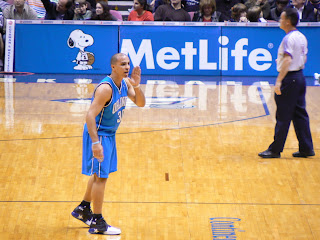 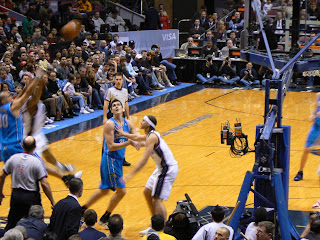 Carlos shoots from the left of the photo. From these seats, the backboard obstructs some of your view. But at least it doesn't obstruct the other basket. Oh, and that's that Darko dude looking up at the ball. 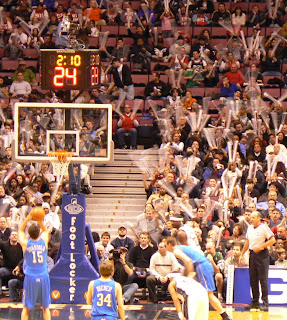 This is supposed to show what it's like to shoot a free throw with a crowd waving Thunder Stix behind the basket. Unfortunately, empty seats can't wave Thunder Stix. And not everyone was doing it anyway. The NBA is ridiculous with stuff like this. Endless minor league baseball-esque gimmicks, cheerleaders and dance squads, and music playing during the game. On every possession. I will say, I liked the little parachutes that drop down on the crowd with little prizes. Way more fun than the stupid T-shirt tosses. And there was this flamboyant dude that emceed a giant Simon Says game on the court at halftime. I hadn't seen a good game of SS since elementary school, so it was surprisingly fun. 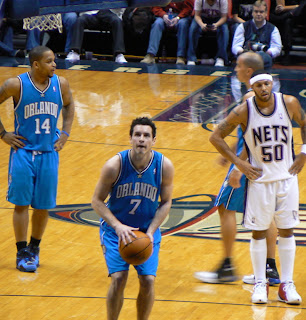 There was a lot of Dookie in te crowd, thanks to JJ Reddick being on the Magic. 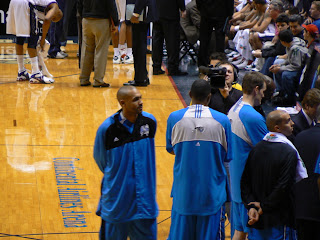 Remember Grant Hill? With the piano playing and the obeying of one's thirst? He seems to be on the Magic, but doesn't play. 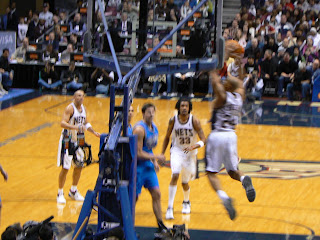 This was the best action I got. Blurry, yes, but it still looks pretty cool. Richard Jefferson is about to slam it proverbially home on an alley-oop from Jason Kidd. This'll be RJ's last dunk for a while, as he's going in for surgery. It's hard to get non-blurry shots at events where there's darkness surrounding a bright area. This camera does much better than the old one, especially considering I haven't even started playing with the different settings and stuff.

Just finished watching Colts-Pats. Don't worry, Pats fans, it just wasn't your year. You got to this game because the Chargers' players brains fell out onto the sod last week anyway. I said it during that game: They didn't look like a team that was going anywhere, and today they proved they weren't exactly a well-oiled machine by blowing the biggest lead ever in an AFC Championship. To Peyton Manning. You've got three Lombardis, seriously, don't worry about it. Besides, we now get to see what we've been waiting for for years: Peyton choking on the game's biggest stage. Fun! Last time he had the chance, in college in 1998, my Nebraska Cornhuskers embarrassed him to take the national championship. A decade later, I can't wait to watch Payton do it again. Go Bears! (Those of you more bandwagon-ish Pats fans should be used to that, as you were probably doing the Super Bowl Shuffle in '86.)

Note: Just when I thought I'd have this "rooting against Payton" thing in common with all Pats fans, I get a call (after I wrote the above paragraph) from my girlfriend, a Pats fan, telling me how she can't wait to root for the Colts because she still harbors resentment toward the Bears from '86. Oy. I'm so glad I'm down to caring about only one sport...

Note #2: On the winning touchdown, when the Colts guy jumped up toward the crowd, I swear the person right there in the front row was Letterman's mom! And it would make sense: The game was in Indiana, and on CBS. Maybe they got her sweet seats for some gimmick for Dave's show. We'll see.

Note #3: TJ by Ma Nature in that Bears game. The snow only really started falling at the very end. I wonder if weather.com was paid by Fox to say it would snow all day so more people would tune in.

Comments:
Jere, remind all your readers that if they click on your pics, they will blossom so unbelievably to fill their screens, whether they be a 14" square screen all the way to 24" widescreens! Simply amazing! I am in the market for a digital camera, and I'd love you to comment/email me with the exact model number. Outstanding! With your writing, and those "so enlargable without losing resolution" pics, well..what a great combination! And hey, I was serious about the camera request....if you can email..........thanks! Just a fan, but who wouldn't be? Peter

Thanks Peter. Anyone with further questions about this magical mystery camera can email me. Including AJM, who asked about it earlier.