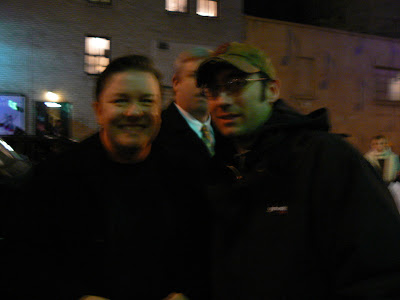 After this, I should just end this blog...nah. Okay, here's the deal. Every so often, I check to see who's going to be on the talk shows here in New York. I always think, If it's someone cool, maybe I'll go to the studio after work to get a picture or an autograph. However, who's really "cool" enough to warrant this? Not too many people. Also, I don't know where to go for any of these shows to see the guest go in or come out--except, that is, for Letterman's show. I stumbled across the door where the celebs come out in about 1994, and, as I found out tonight, they still use that same door. So, we're limited to: Really, really cool person, must be on Letterman. Last night, I saw that Chan's favorite quirky, blonde songstress, Nellie McKay, was on (with the Brooklyn Philharmonic--which is weird since my favorite quirky, blonde songstress is now touring with the London Symphony Orchestra). But I noticed it a little too late, and, really, to go out in the cold just to do a favor for Chan (he can't get out of work that early), who probably wouldn't care if I did get her autograph, even if it was personalized to him? Come on. So, I thought, Well, if someone that cool doesn't do it for me, who will? Answer: Tonight's guest, Ricky Gervais. I saw he was on, and I planned to be there. So I brought my camera to work, and headed to the Ed Sullivan Theater around 6:00. 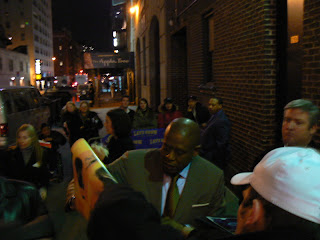 I got to "the door" and waited among the slime with their posters and photos, ready to have signed for later hawking on the internet. A dude came out, and I quickly recognized him as that dude in Good Morning, Vietnam--one of a select few who got to join in on "And if you doooo..."--Forest Whitaker. That's him, above. I was a little scared that maybe I had incorrect info about Gervais. But I kept waiting. Then a tiny woman from London started asking me who I was waiting for. I told her I thought I was waiting for RG. She asked about Forest. I showed her my shot. She said a bunch of stuff I didn't understand through her thick accent, and I smiled and laughed politely. All of a sudden, people started saying, He's over there! I turned around to find that he'd come out the other door, and there he was, five feet from me. 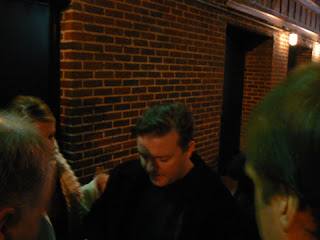 In case you had any doubt, he's the nicest bloke you can imagine. It wasn't "rush to the car." He started posing and chatting with everybody. I was basically standing in front of him, snapping away. The girl from London and her friend started getting pictures of each other with him. I thought about asking them to take one of me and Ricky, but I opted against it. 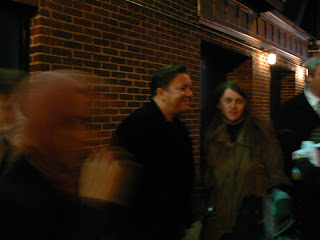 The security guy started saying, "Okay, Ricky, right this way" and "Okay everybody, that's enough," but Ricky wasn't having it. With each new autograph- and picture seeker, he went, "Oh, sure," showing genuine surprise. He was acting like, "Of course I'd take a picture with you, why wouldn't I? I can't even believe you'd want this. Sure." It kept seeming like it was all over, but more and more people kept coming out of the woodwork. Seriously. Originally, there were maybe twenty people outside, but people flocked to Ricky from nowhere when they realized it was him.

Then the nice girl from London saw me standing there, just kind of gawking at Ricky at this point, and she says, "Do you want a picture with him? Da you?" I sprung into action. Jumped right in, like Rebecca with Red Sox players, and asked if I could get a picture with him. "Sure, mate," he said. (No, he didn't really say "mate.") She snapped the pic. Not too blurry, nice. Then I thanked her, said goodbye, and walked away, with Ricky still having a laugh with the commoners.

It was so surreal to see that guy up close, just because I've been seeing him so much on my TV screen the last few months. That guy rules. Thanks again to BSM and my girlfriend for introducing me to his comedy, well into his career.

Were you guys having a laugh?

I'm jealous, too.
Jere, could you put his entire name in big letters on the blog so if he's sitting in his hotel room tonight with nothing to do but google his name, he'll be able to find your most kindly words about him
From,
Just Another Mom Telling Her Kid What to do.

Mom, I doubt Gervais is still at the "googling his own name" stage.

Ryan, that brings up an interesting point. (And note that I did use that phrase in the original post.) I met him, as a "fan," right at the moment in his TV show where his character becomes famous for his own sitcom and is dealing with people recognizing him in public. SO of course I'm standing there thinking, Should I jokingly ask him to "do the catch phrase" for the ultimate irony? Or should I say, "Don't worry, I won't ask you to do the catch phrase."? Or should I say, "Do Andy Millman doing his his boss saying the catch phrase!" The point is, he has come up with this mockery of dumb TV shows and dumb fans, and he really could start living it. It's so weird.

He was awesome on the actual show last night, too! Really hilraious. Some people just have a knack for comedy that can't be taught.