Remember when I wrote about that crazy guy who dresses up in costumes and sings weird commercial jingles? That would be Pleaseeasaur. He's been signed by Comedy Central, with a DVD/CD set coming out and a tour later this year. Go see this dude in a city near you. He rules.

Today, for work, I found myself on the old people's bus. I borrowed my dad's digital camera this week, and had it in my pocket. So I started shooting. Just the usual New York stuff on a gorgeous day. The Jesus H. Chrysler Building: 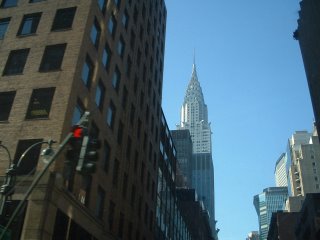 Here, I was trying for another shot of the Chrysler, but the bus started turning down Lex, so I held the camera out and shot randomly. Totally missed my target, but I like how this came out. The perspective is cool, like I'm standing on top of a flagpole in between lanes. Or, on the old people's bus: 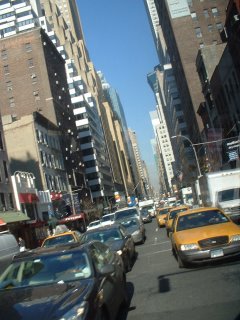 While waiting for Chan to meet me at 37th and 5th, so we could look for an external DVD burner, I took this shot. It's a building. And it's lit up and stuff. And there are a tree and a bus in front of it: 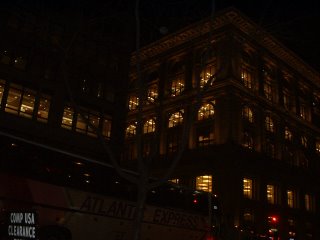 Another dark one of the Empire State Building. Lit up red, white, and blue. i.e. the default colors. (But Chan suggested it's in honor of the U.S. Olympic team. That building wears it's emotions on its phallus, I tell ya.) 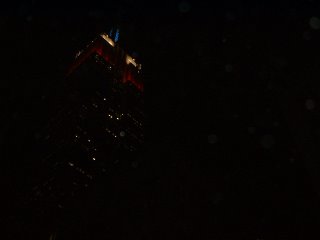 Finally, before Chan and I went to eat at "The Big Enchilada" (formerly "The Enchilada"--the name has grown but the portions have not!), which narrowly edged out Zen Palate, we headed over to Barnes & Noble to use their fine facilities, aka pissahs. Who did I see standing outside the door? Someone's whose face I'd only seen on the internet. Fellow NYC Red Sox blogger FiNY. At least I thought it was her. Red Sox hat, Notre Dame sweatshirt. Had to be. So my plan was to wait til she started walking away and yell "Finy." If it wasn't her, this person wouldn't even turn around, and I would be saved the embarrassment of randomly asking someone if they are someone they are not. I went through with the plan, and not only was it indeed FiNY, but she recognized me as well. Here's what the scene looked like, as seen through the eyes of Chan: 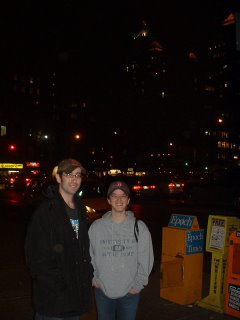 That's the east side of Union Square in the background. In the picture, if you get real close to the screen, you'll see what I like to call "that building with the cool clock." Anyway, we chatted in B & N for a while, and of course I had a book all picked out for her. Was good to meet my, what, eighth fellow Sox blogger? So weird. She was cool. Check out her blog, and maybe you'll see a slightly different picture of us taken with her camera, but also by Chan. So there's Chan stuff in both places.

I just read in the Post that Roger Clemens' mom's last wish was for him to retire. I'm wondering now if it was her advice he's been following all along: "Remember, son, friends and loyalty and telling the truth are important, but, when in doubt, follow the money." In fact, maybe she told him to reire as her "dying wish" a few years ago, when he fooled Dunbar fans into thinking he was going out in a blaze of glory (where glory equals losing the World Series to the Marlins), but then she didn't die, so he kept playing. [Edit: I seriously am trying to avoid even talking about this, but for the record, I'm 100% against Roger coming anywhere near my team. It's just a rumor anyway, always has been. But, I'm just saying, put that money into some youth. I'm just never forgiving Roger. Not gonna happen. Ever.]

Johnny Damon's loyalty lies in an only slightly less confused place. He says his real loyalty lies with his family. (Read: so screw any other people who may consider me family.) I wonder how his dad's Vietnam battallion would have felt if he told them, "I've gotten a much better offer from the VC, so I'm gonna switch over and fight for them now. But thanks for everything, it's been an honor and a privelege. But--I'll still be loyal to my blood relatives, so it's okay."

And I didn't believe Michelle had anything to do with Johnny's moving to the Big Apple, formerly Fun City, but only because I don't live in Boston and am not constantly getting the wife updates lot a lot of you, but then I read that she's "enjoying fashion week" here in NYC with some friends. So, maybe it was partly her call. And I'm not one of those guys who thinks Yoko broke up the Beatles. I'm down with Ono.

They're talking about Varitek making the US WBC team like it's some new thing, but I saw Varitek USA shirts for sale at mlb shops a week ago. (I'm only looking because I want to get an Ortiz Dominican T-shirt, which I'm still waiting on.)

I heard from a Boston-area person that NESN showed a "classic" Red Sox game yesterday, one which the Sox lost to the Dunbar crew last season, in a pitching duel between Captain Tall 'N' Fugly and Tim Wakefield. Addd this to the '75 and '86 World Series' that were shown last winter on NESN, and that makes, well, several Red Sox past losses shown on NESN. I give them so much credit for this. The YES, aka HELL, NO Network will not so much as admit that the yanks have ever lost a game, let alone show an entire nine-inning loss, regardless of how "classic" the game was.

Quiz Go To Sure Was Lamb-da

Okay, I'm not even halfway through the Greek Alphabet, and quiz season ends when baseball season starts. So look for a lot of quizzes in the next month and a half.

Here's one I learned the answer to this weekend: When George Costanza says to the convict on the cover of Time, "But ya are, Blanche, ya are in the shackles," what is he making reference to? And if you don't know it and you Google the answer, please keep it to yourself. I want to see if anyone knows this.

When I first moved to New York last May, I noticed a street in my neighborhood that's closed off to cars. But not only that, it's on a hill. My first thought was "I will be sledding down this street as soon as it's coated with snow."

I didn't exactly stick to my new city's resolution, but tonight I did watch some sledders (yes, the whole neighborhood had the same idea--maybe not eight months in advance like I did, though) and half-heartedly snowboarded a few feet on a piece of cardboard. Before my borrowed camera's battery ran out, I got this shot looking up the sweet sledding hill-street: 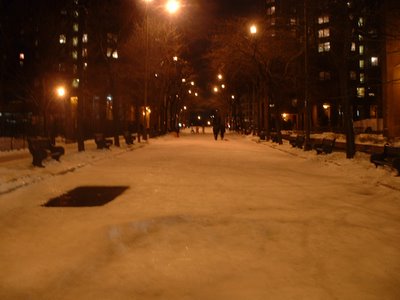 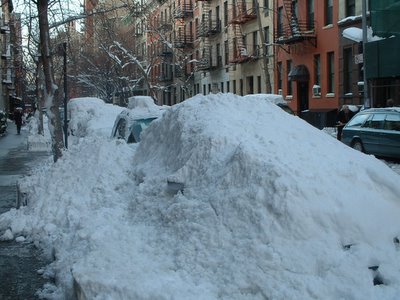 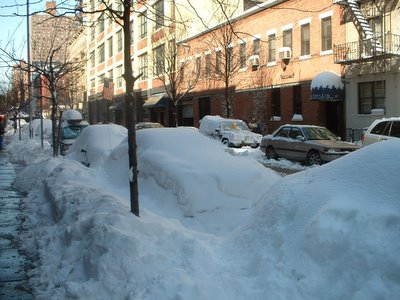 Bonus photo: The best shot I could get from a moving car of the New Haven Coliseum being ripped apart.

After all, the most important thing is that the freedom-hating quail is eliminated. Once the smoke clears, check on your buddies for collateral damage.

In Dana Levangie news, he's back with the Red Sox organization. I was so excited about Ed Romero's son coming on board, I missed the blurb about Dana.