Chan Puts The Fun In Funeral

I love the "it's your funeral" phrase. Especially when it's totally inappropriate. As in, "Hey, Chan, I'm gonna run out and get a Chipwich. You want anything?" "No, thanks." "It's your funeral."

It's almost as cool as "dead to me," which is gaining newfound fame on The Colbert Report.

Note: Don't read anything into the fact that both phrases have to do with mortality. Lay that thought to rest.

Or I'll kill you.

Days after writing of my plan to go to Fenway and yankee/Shea Stadium on the same day, a plan which can pretty much only be done on Patriots' Day, due to the Sox' annual 11:05 AM start, I got an offer for Patriots' Day tickets, from someone with no knowledge of my plan. So now it looks like I can actually do this. The Mets tickets should be easy to get, once they go on sale. I will keep you posted.

My mom will be on The Leonard Lopate Show tomorrow, Friday, at noon. You can click that link and listen to it over the web or get it as a podcast or whatever. She'll be plugging her new memoir, Girls of Tender Age.

I think my mom's book will be helped by the fact that there's another popular memoir out now that also has "tender" in its title. Also, with the discovery that that other memoir-writin' dude made a bunch of it up, remember, for a memoir with "tender" in it that's fib-free, check out Mary-Ann Tirone Smith's Girls of Tender Age.

Out now are the Hartford Courant review and the San Francisco Chronicle review.

This Sunday she'll be in the Connecticut section of the New York Times, who will also review the book the following Sunday.

Here are some pics I took earlier tonight (click to enlarge): 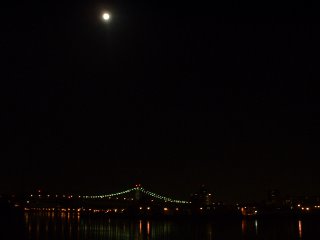 Moon over the Triborough Bridge. 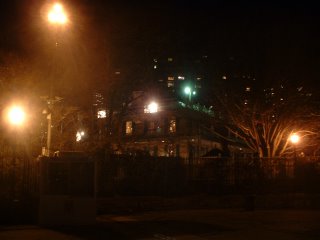 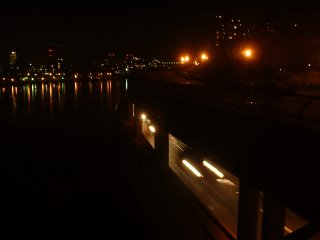 At right, the FDR Drive north. Above that, the esplanade of Carl Schurz Park. At far left, the tallest (only?) skyscraper in Queens, across the East River. In the way back, middle, that string of lights is the 59th Street, or Queensboro, or "Feelin' Groovy," Bridge. 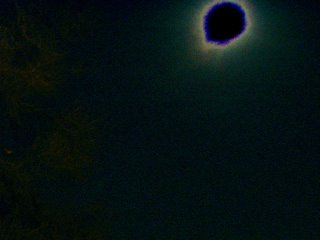 This is what happens when you "enhance" the moon in iPhoto.

Kevin Millar is an Oriole. I have tickets to that May series against them. I can't wait to give that dude a standing O.

Did I Mention This Already?

I have this fantasy of seeing a game at Fenway and one at yankee Stadium on the same day. The key to this plan, of course, is Patriot's Day.

With the 11:05 AM start (although it says "TBD" on the schedule right now, but I'm sure it will be 11:05 as per tradition), it would be possible to see the entire game, then drive to The Bronx in time for a 7:05 start there.

If the first game ends at 2:00, factor in a half hour of exiting traffic, which could be more due to the marathon (Boston people--I take it parking's bad that day? Oh my god, I can't believe I actually had to ask...), so make it an hour, plus 3 1/2 to get to New York, plus a half hour of parking and getting through the crowds to get into yankee Stadium, and you're in your seat right at first pitch. Or you could use airplanes, which I'm not prepared to do.

Foiling my plan this year is the fact the yanks are off that day, with a road game on either side, so even a schedule change keeps them on the road.

I could do Fenway and Shea on that day, as the Mets are playing the Braves at 7:05 PM. (The following night is 7:10! Come on, Mets, go with 7:10 for the whole series--you're costing "Fenway/Shea in one day" people a potentially crucial five minutes!)

But that wouldn't be quite as exciting. It still would make a nice little travel essay, though. 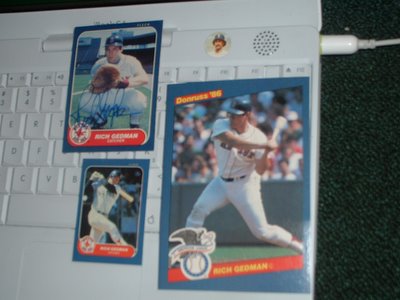 Above are three Rich Gedman baseball cards, an '86 Fleer Mini, an autographed '86 Fleer (which features my 10-game plan seats, just to the left of Rich's right eye, on the right edge of the bleachers), and an unwieldy '86 Donruss Baseball Stars.

Just to show a fourth size of baseball card, I've placed them on my keyboard where my tiny sticker of 2008 Hall of Fame inductee Jim Rice lives.

The current Gedman cards I now have are:

Five of those are autographed by Rich.

Coming soon, an '82 Coca-Cola, and an '87 Topps that was mistakenly printed without anything on the back. Sweet.

Here's what I wrote about him after Game One of the 2004 World Series, a series which was won by the Boston Red Sox. (Feel free to read that sentence one thousand times. I just did.) I'd prefer to not have the guy on my team, but maybe he'll keep his crazy head on his shoulders. I really, really hope so.

My thoughts on the Red Sox as of mid-January:

Hitting: Manny and Ortiz plus any seven other dudes plus our pitching equals 90 win team. Fine.

So there you have it. My point is, there are a few holes, they will be filled, and none of them involve pitching. There are question marks in terms of Schilling and Foulke, but overall, I'm just not worried. If I start to worry, I'll let you know. I definitely want to get to March before making any final judgments.

You might give me a whole bunch of stats that show how guys are going to start doing bad. That brings me to my next topic.

I love stats. I love the concept. It's one of the reasons why baseball is the best game. I could pore over one box score for a year. But I'm not a big fan of projections. Granted, that's partially the point of keeping statistics. To me, though, stats are all about the past. Which is good. I'm down with the past. That's why I have hundreds of video tapes, basically documenting my entire life. That's why I write, too.

But projections just don't mean anything to me. You can tell me that Papelbon's projected Total Earned Run Ratio Indicator Before Last Earned Jug Of Brandy rating is a perfect 1.000, compared to Hansen's .004, but the games will still be played, and I'll still watch them. And I can hope against hope, when necessary, that the unthinkable happens, and sometimes it does.

It's almost like people are trying to figure out what happens before the games are played. I don't understand why you wouldn't want to watch and see what happens, without having to know ahead of time. It's almost like stats are being invented like they're new products. On-base percentage was like the erasable pen. When I first heard of it, it was revolutionary to me. And now I'm stuck holding it while everyone else has their iPods and DWARF ratings or whatever. But I seem to be fine with it, only occasionally and selectively joining modern times.

A-Rod could slip on horse dung in July and break his coccyx. Posada could get a sex-change operation and quit baseball after this season, choosing to run a hair salon instead. You can't project this stuff! (Although if either of these things happen, remember, you heard it here first.)

I'd like to know how often projections come true. That's the stat I want. Some kind of projection accuracy monitor. Don't tell me, they already have it, right?

All I'm saying is, none of these stats factor in the "how hard is Jere rooting for the guy in a key spot?/is he tapping his leg at the right speed to make the guy get a hit?" quotient. To me, that's where the fun is.

One more thing: I don't think I ever actually acknowledged the fact that the White Sox won the World Series. Probably because it was the most anti-climactic drought-breaking of all time. Sorry, guys.

Tonight I had tickets to The Colbert Report. It was to be the second time for Chan & I, and the first time for my friend Brian (pictured, at Omaha, Nebraska's Cog Factory in 2001 while on the U.S. tour of our old band, The Pac-Men) and 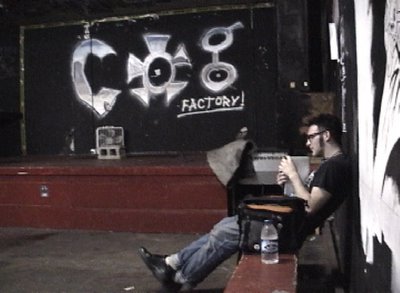 I was holding a place on line, when Brian appeared. "I hit a snag," he said, my car's gone." They had driven into the city from Connecticut, and now it didn't look like they'd be driving back.

At that point, The Colbert Report was the last of their worries, so they left Chan and I to fly (Han) solo (-flex).

Turns out the people in front of us got the last available tickets, as it's a first-come, first-serve deal. But they're going to give us four "VIP" tickets to a future taping. Which works out perfectly. Because Chan and I would've felt horrible had we gotten in tonight, with Brian and Jessica off looking for their car. And this way, they'll have another chance to go, and with sweeter seats.

And we avoid Nancy Grace, who was tonight's guest. Borrrr-ing.

After we were denied entry to the studio, we went to the police station to look for Brian and Jessica, waited for a while, and then finally just got food at Zen Palate. But not before we checked Burritoville, which is where we had planned on going after the show before the car thing happened.

We talked to Brian when we got home, since neither me nor Chan has a cell phone, and found out that eventually the car showed up at an impound place. They gave him a tow and a ticket for being parked illegally, albeit accidentally. TJ, NYPD. And they had been at the police station and Burritoville, in each case right around when we were there. That just added to the weirdness of the night.

So it all worked out, except for the multiple hundreds of dollars Brian now has to pay.

The moral of the story is: Chan.

The national TV schedule is out. We've got a bunch of Monday games in May on ESPN, as well as Opening Day on ESPN2. There are a bunch of Fox Saturday games from June to September.

The August 12th game against Baltimore will be a killer, due to its unorthodox 1:20 AM start time.

My Anything Journal is still going strong, now into June '83.

Miguel Tejada says he will stay with the O's.

So, tomorrow, look for a story that says he doesn't remember saying that. 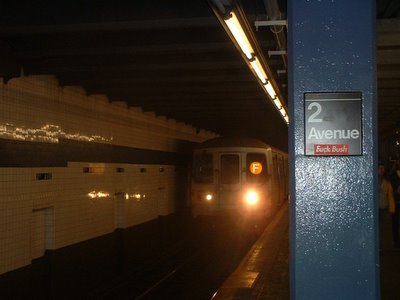 My friend Brian was down from CT on Friday, and I went up to his place on Saturday. While we were out on Friday, between eating at Grilled Cheese NYC and watching Vertigo on the big screen, I was snapping pics of basically everything, including the one above.

Brian and I exchanged Xmas gifts. He got me a shirt with the old Atari Football game pictured on it, and a chocolate milk mixer thing.

I got him the Bill Ripken "Fuck Face" baseball card.

For those unfamiliar, Bill Ripken once posed for a baseball card holding a bat. On the knob of the bat, in black capital letters, were the words "fuck face." It was most likely a joke played on him by his teammates. Then again, the words are face-up, so he may have been in on it. The people at Fleer must've known, too, to let it go to print. But when the big wigs found out, a black box was added over the infamous phrase.

I managed to find an original with the "fuck face" still intact.

Brian was happy with the gift, but noted that the only bad part about it was how the one person he would have wanted to call at that moment to boast about his new card was me.