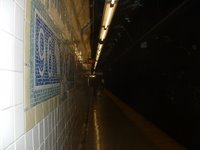 Inside the 96th Street subway station. Click on each pic to improve your witnessing experience. Today, I had planned to get my niece a Christmas present which could only be obtained at a certain store at South Street Seaport. But I heard they were allowing the public to sign the first beam of the Freedom Tower (I'm not a big fan of that name), which goes into the ground this week, so I went there as well. Here are some pictures from my journey. 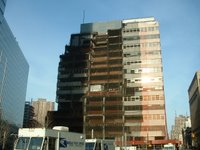 You'll notice what's left of Fiterman Hall is still standing. I've talked about this building before, after my March trip to Ground Zero. The Deutsche Bank building is also still up, but supposedly both will come down soon. 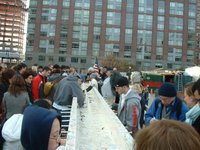 People signing and reading the beam. They had a time before this for victims' family members to sign. I walked all around Ground Zero before I finally saw a little sign on a random door saying the beam would be a few blocks up from there. 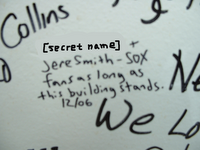 Here's what I wrote. Since it would certainly appear that mystery person, aka my girlfriend, and I will be Red Sox fans forever, this should ensure this new building will stand that long. I tried to be respectful to the other people there, writing my thing small as to not take up too much space, and taking my picture quickly, so others could get their message in. Of course, these will all be hidden soon. But it's be cool to know that we'll be a permanent part of New York City.

And this way, if any of the more heartless Yankee fans out there are rooting for me to stop being a Sox fan, then they're rooting for the Freedom Tower to fall. I'm talking about people like the guy who
commented here recently, when I mentioned the Sean Bell killing. Here's what he wrote:

I heard that the unarmed man was wearing a Bo Sox cap though...maybe the pro test has to do with not enough shots being fired then!

Yeah, a hole like that would have no problem rooting for terrorism. Or thinking "protest" is two words.

Anyway, it was kind of sad to see some people holding hands in some type of prayer circle, and reading the other notes written by family members. 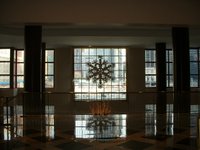 Inside the Winter Garden, looking out the window at Ground Zero. 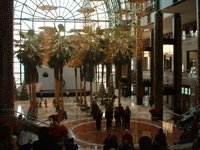 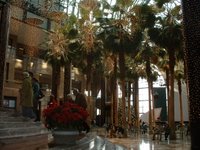 More shots from inside the Winter Garden. When you go around Ground Zero, you end up passing through here. Those are real palm trees! (I've actually seen another palm tree in New York--outside some random apartment building in the 30s or 40s, I think.) 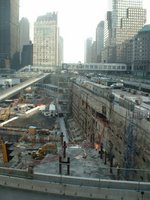 A Ground Zero shot I didn't get last time: from the northwest corner, looking south. 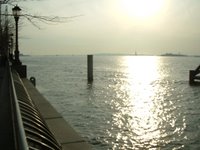 It was such a nice day for December, I was able to casually make my down the west side, taking the long way, basically around the southern tip of Manhattan, over to South Street Seaport on the east side. The sun was so bright, it was hard to get shots of Miss L. No matter how far I walked or how long I waited, it seemed like that sun was right over her head, making it almost impossible to get what would've been great shots. 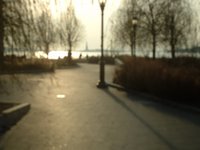 This seemed like a throwaway, but then I thought about how cool it is that Statchie McGee's shape is recognizable, even when blurred and far away. This is from Battery Park. 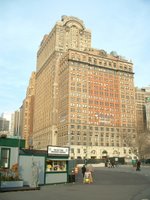 Something about this struck me, the way that tiny stand is in front of the endless row of tall buildings. This pic is taken from the spot where I once got a shot of a big number 6 with a sunset behind it, only this one is facing back toward the city. 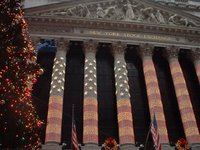 The Stock Exchange likes to get all Christmas-ed up, so no one will think about the people inside methodically slaughtering ol' Moms & Pops everywhere. 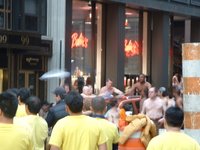 At one point a woman standing on the sidewalk made me take a little detour or else I'd be "in frame." That's right, folks, it was the daily occurrence of something being filmed in the city. I walked along side the action: people rubbing a car with a towel non-stop, while others waited for direction. I asked the third dude to remind me not to use my flash what was going on. He said it was a Chevrolet (?) commercial. When they called for action, a bunch of men started taking off their shirts and dancing around to some song. I think it's supposed to be funny, as one man is clearly out of shape at the right. So, look for that commercial, I guess. 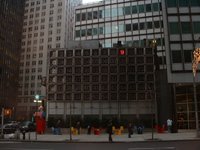 What is this? I'll assume it's a tribute to Ted Williams until someone tells me otherwise... 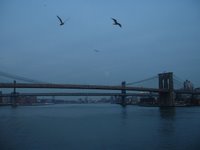 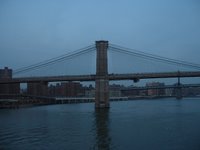 And another shot of the bridge, with the rare direct side view of the west tower. The granite used to build the bridge came from just south of Augusta, Maine. Brooklyn, now one of the five boroughs of New York City, was its own city until 15 years after the bridge's 1883 opening. And those are your fun facts for today. 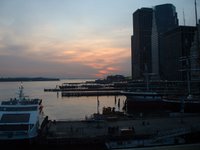 Sun setting near Statue of Liberty. You can actually see a little part of the pink ball that gives us life (but, ironically, will ultimately destroy us). The sun appears to set in the south here, because of the fact that Manhattan actually runs northeast to southwest, plus the fact that it's about to turn to winter here in the northern, or awesomest (to second-awesomest), hemisphere, meaning the sun sets as far to the south as it ever does. 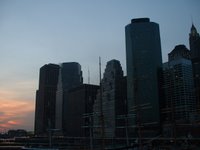 Lower Manhattan, just to the right of the shot above it. You can also see Lady Liberty in this one if you look closely.

This whole area I walked around today is so different than anywhere else in Manhattan. This was the orignal New York, before they (smartly) covered the rest of Manhattan with a nice, neat grid. But down there you get the skinny, curvy, hilly, sometimes cobblestone streets. Those combined with the seaport make it a lot like that whole Quincy Market area of Boston.

Then I got home and saw that L-girl was doing anagrams, so I joined in. She was looking for one for her blog's name, "We Move To Canada." I came up with a pretty gold one: "A. Wood: A VT menace." (Her partner's name is A. Wood and he's from Vermont. You know him better as redsock or The Joy of Sox.)

Bonus coverage: My dad took this shot when my parents were in Hawaii. It was still on the camera, which I'm borrowing from him, so I thought I'd post it. Nice job! 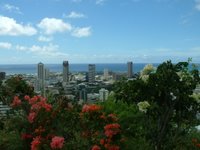 Comments:
That Yankees Fan, who spelled "Pro Test", would need "Hooked On Phonics" to spell the word "Class":

That Yankees Fan, who spelled "Pro Test", would need "Hooked On Phonics" to spell the word "Class":

Jere, were the NYC pics taken by you with the SAME camera? The resolution is tremendous, even when tranlated/shifted to your blog. NICE!! Let me know...then I might, just might, buy one. Thanks...I am overdue. But I live in Hartford. Not as much going on.

Thanks. Yeas, same camera. It's my dad's. I borrow it. It's pretty old. I've gotta get myself a new one. Anyway, I realized how much better it is to shoot on the best resolution, even though you get a lot less shots, obviously. I also stopped zooming so much. There's no need to zoom when the pics come out so huge anyway. The only problem with this one is the whole shooting-in-darkness thing. I've noticed, when going through my old photo galleries on the PC at work, that many pics come out almost totally black. (They can be seen much better on a Mac, but still.) So, I recommend you (and I) getting new digital cameras.

The Winter Garden and the Battery Park Esplanade, that whole area, is one of my favourite NYC places. I love the Walt Whitman quote along the water.

Shortly after 9/11, when I was still going downtown all the time, just to kind of be near it, I was looking at the Winter Garden from the outside, and said, Hey, I never noticed you could see the Woolworth Building from here. Then it suddenly hit me that you couldn't - and why now you could. It all hit me all over again.

Thanks for the pics.

Sure. Yeah, stuff like that frekas me out. I was gonna write about it, but I'll do it some other time.

I stood there reading this quote yesterday, which I guess is near the Whitman one:

“One need never leave the confines of New York to get all the greenery one wishes–I can’t even enjoy a blade of grass unless I know there’s a subway handy, or a record store or some other sign that people do not totally regret life.” ~Frank O’Hara, Mediations in an Emergency

Also, do you know what that grassy knoll is? The one you go underneath and enter through a tunnel, and then you're on this little grassy hill with stone walls all over it... It's along the esplanade, west of Ground Zero. I can't even find it on a map, even on satellite.

14 years later, here's the TV ad I saw being filmed that day.