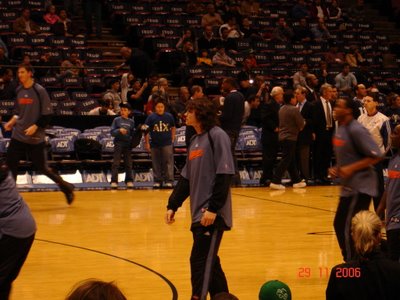 Yesterday I got offered free tickets to the Nets-Bobcats game. I decided I'd go if Chan wanted to go. Two hours later, Chan finally responds to my calls and e-mails saying he's in. Well, terrible job, Chan, it was too late. But at that point, we both kind of had our hearts set on going, so we just bought some cheap tickets and went anyway. Click to enlarge, then click again to mega-fy. 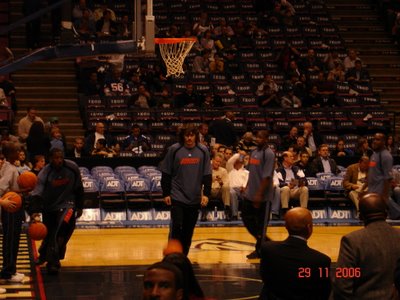 I'd like to say I planned this out, since the Bobcats are the team that my boy Adam Morrison playes for. But it was totally random. As you know, I here at ARSIPT was all about the crustached commie when he played for Gonzaga. (As was she at Witch City Sox Girl.) So, guess what? All the shots are of him. (Note the Celts hat in shot 1.) 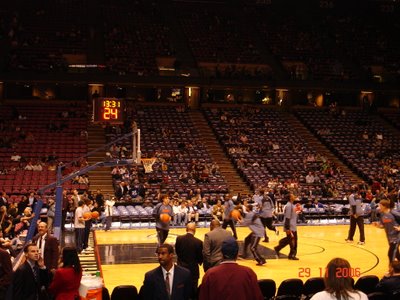 The bus to the Meadowlands is a sweet deal. Nine bucks round-trip from the Port Authority bus terminal at 42nd and 8th, and it takes about 12 minutes. Terrible job by Chan thinking they'd let him into the game with a laptop, though. He had to check it in--on the opposite side of the arena. 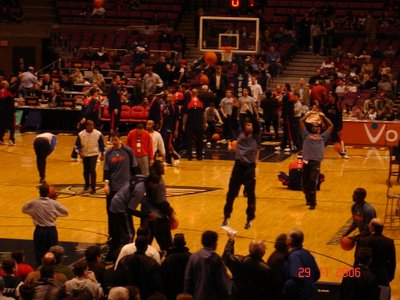 It's funny how when I asked Chan about going, he said "my team needs me." Funny because I grew up with the Nets and here I was just not caring except to root for Morrison, and him rooting for my old team. In fact, I think he's in the other room now rooting for them against his old team, the Bulls. [edit: my mistake. they played the Celts tonight.]

There was one other guy I cared about, actually. I heard the PA guy say "Mikki Moore," and I thought of the Mikki Moore that was a freshman at Nebraska when I was a freshman at Nebraska back in '93-'94. I honestly thought he'd disappeared after college, as, despite being a fan favorite, he didn't seem like NBA material. But it was him. All these years later. On the Nets. In the above shot, Morrison is shooting, and Mikki is behind him, back at the other end of the court, the Nets player furthest to the right. He's got crazy dreads now! He reminds me of Tim, the drummer in my old band. In fact, between the lanky, dreadlocked Mikki and the gangly, shaggy, Apachella-esque Morrison, I felt like I was at a Pac-Men/Charm City Suicides show at Newtown Teen Center. And with Brevin Knight also on Morrison's team, it was like "Guys who Jere liked while they were in college for one of many oddball reasons" night at Continental Airlines Arena... 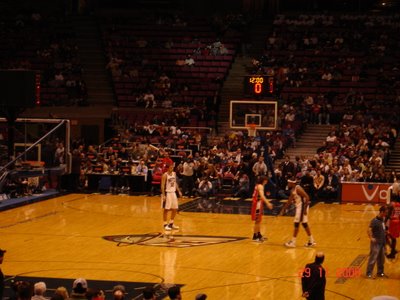 Now the game is actually starting. Here Adam greets Vince Carter. Thanks to co-worker Jennie for the camera. Terrible job by said camera for having that datestamp. But beggars can't be choo-choo-choosers. 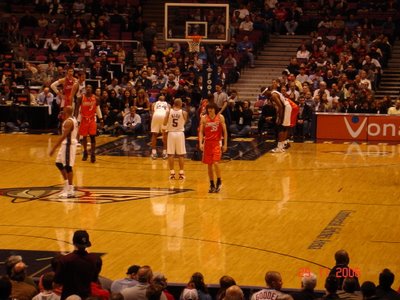 More of the same. The Bobcats led most of the way. When it got close, we watched as Morrison went into psycho-mode. He suddenly decided he was going to win the game for his team. He started running around like a madman, basically letting everyone know that he'll be getting the ball and scoring with it. It was really cool. He's gonna make a good pro. 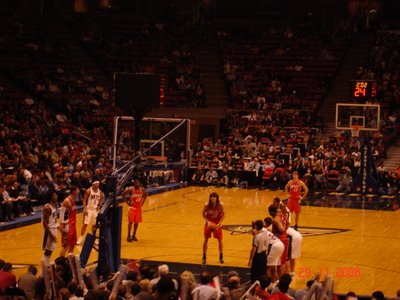 Adam at the line.

Several other Sox hats over in Jersey, more of them non-fashion than fashion. When we got back from suburbia, we walked along the underappreciated Forty-First Street, going east. It gives you, we learned, a nice angle on the Ghostbusters Memorial Library, which, we also learned, was just at that moment testing out the lighting of its Christmas tree, which overlooks Bryant Park (where they show movies in the summer and have a skating rink in the winter). That would've been a good picture, as would the Empire State Building in the misty haze, but Jennie's camera had run out of juice.

Jennie left for Australia today. It's always a funny moment when someone is saying goodbye to you for the day, but to the person next to you for a few weeks, as they're headed off to some exotic place: "Bye, Jennie! Have fun! Australia, wow, that's gonna be great! Well, see you in three weeks! Safe flight! Bye-eee!....Ahem. Well. Bye, Jere. See you tomorrow..."

Comments:
Enjoyed the Nets shots, Jere.
This message has nothing to do with the Nets or anything else. It's a personal message to AJM who is looking for restaurants in BA. First, there were no bad restaurants that we found. The best one--the name escapes me--was on the river and they're known for bringing you food from the time you sit down until you leave--food you didn't order! It's extra food. (Try the concierge.)
I'm sure you know that people don't begin dinner before 10PM so if you're looking for something really neat to do beforehand (or whenever) go to Bar Sur. It is a very old, teeny tango bar where one to three couples entertain; it's tango you'll never forget. Also, this hundred year old chanteuse sings and a two hundred year old piano player plays and they are equally unforgettable.
Finally, as rediculous as this sounds, go to the Claridge Hotel around three or four and have tea in the bar. After you finish one three-tiered plate of food, they bring another. Followed by another with a zillion desserts. (Jere's dad had vodka tonics rather than tea, just so's you know.) Have fun.

ps to AJM:
The NY Times' supplement to the magazine, The Sophisticated Traveler, September 12, 2004, has a huge article on BA and Bar Sur is the cover photo.
(Thanks for the conduit service, Jere.)

JeresMom:
Thank you very much! I think we're signed up somewhere for a tango lesson; maybe we can try it out at Bar Sur. We're trying to finish the remaining details on our itinerary today. We leave Wednesday night, and are in Buenos Aires probably through Sunday. Then we'll go to El Calafate, Patagonia, and Iguazu...and maybe the wine country in Chile. Thank you again.

Mom, you conduit any time.

Okay.
AJM,
The tango at Bar Sur is actually a tango show; the world's smallest show but a great one. You can tango on just about any street corner in BA. The Italian neigborhood called something like Bata, has a list of the disappeared who were taken from that enclave on a beautifully hand-painted sign. You're going to love it all and I'm jealous.