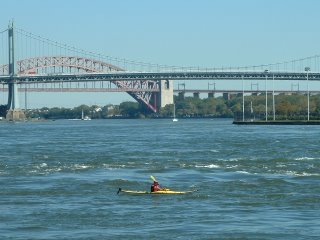 Sunday was a 70-degree, cloudless day in NYC. Chan and I walked til we could walk no more. We started over at the East River. The kayakers were out. Click 2 enlarge. 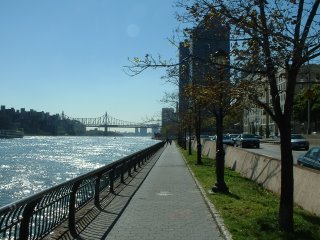 Left: East River. Right: FDR Drive. Far left: The Circle Line, which is the tourist boat that goes all the way around the island of Manhattan. Did it when I was, like, five. Should do it now--I'd know what I was looking at.

We ate at an outdoor table at Lenny's. I watched for dejected Dunbar fans, and enjoyed the perfect weather. 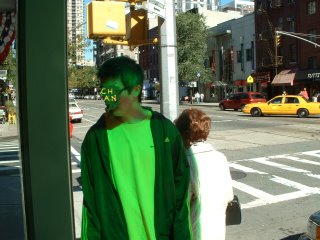 As we moved on, Chan noticed he was green. There was a weird awning above him. I made him pose for a picture. This old lady walked by, and Chan said, "you wanna be in the picture?" This is him turning back to ask her. She was scared and was running away from this Asian Hulk, when she realized, This guy's green, sure, but I can handle it, I'm from New York, and paused to look at what was causing him to be green, and then making herself turn green herself. It was hilarious. "Chan ang-greeee!" (He wanted me to "digitize" his face. I did it my own special way.) 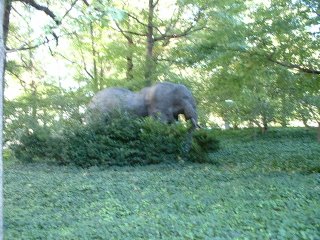 We continued down the East Side to the UN. Right next to the UN is a huge, beautiful park--that's closed. So I took this picture through a fence. One thing about living in New York I never could stomach...all the damn elephants. 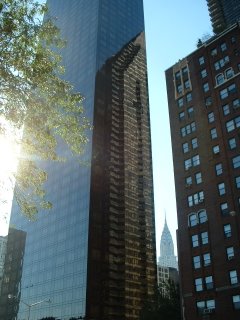 Shot of the Chrysler Building in between two others. The buildings in the foreground are right across the street from the UN. 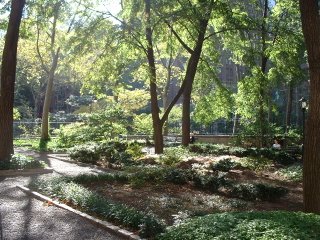 Right near the UN is Tudor City, where rich folk live. The landscape is very cool. The area is up above First Avenue and 42nd Street, and has a couple of little parks. This park is so quiet and beautiful. You'd never know it lives right by a whole lot of hub and bub. 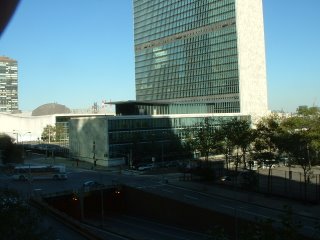 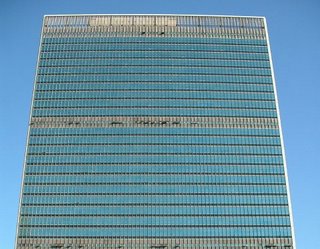 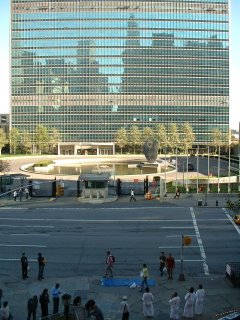 These dudes from Burma were protesting and chanting and fasting across the street from the UN. They were drinking during their fast. Chan said this was allowed, whereas I felt only gum should be allowed in the mouth. Sorry the top and bottom of the building don't really match up. 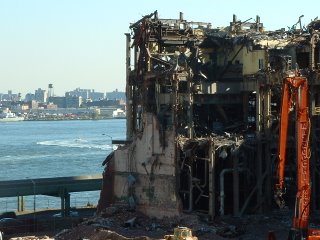 I'd been meaning to get a shot of this building--just south of the UN--for a while. It's been like this for months. And it's not like it's in some hidden location. Everyone coming down the FDR sees this mess. (Which is fine with me, because it looks awesome.) 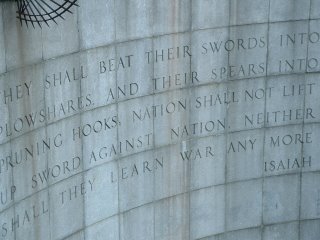 A quote on a building across from the UN, by former NBA great, Isaiah Thomas. 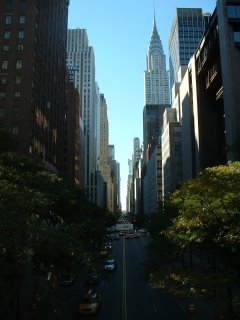 I wanted to go to the store that sells a certain kind of vegan marshmallows (there's monkey bones in marshmallows, you know). It was downtown and on the West Side. So we started to walk along 42nd, and go all the way to Times Square, and catch the subway there. Chan also wanted to see some French lawn-bowling thing in Bryant Park, which is why we didn't just catch a train from Grand Central. But we saw some other stuff along the way: 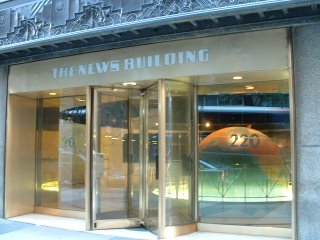 The Daily Planet! Actually the Daily News building, but you may recognize this from Superman. 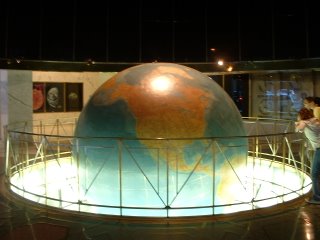 Here's the globe from inside the lobby. 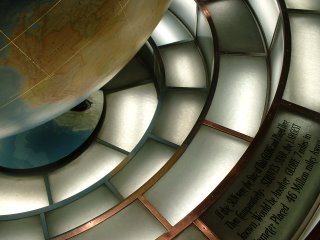 There are a bunch of these little fact things down below the globe. 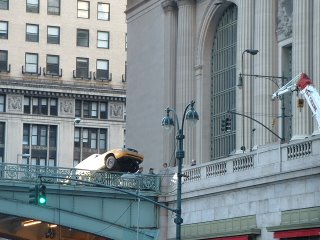 As we kept walking on 42nd, I looked up and saw this. It freaked me out for a second. "Chan, look at that." "Yeah," he said, as if he'd been looking at it for the last five minutes without saying anything, "they're filming up there." 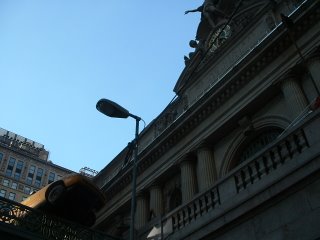 As with any day in New York, someone was shooting a movie. Chan even said, "you know, I'm getting sick of these." (I never will.) 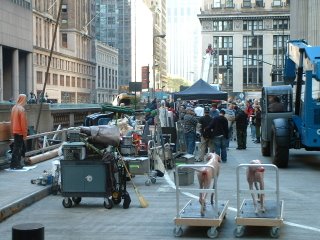 As everyone else watched from below, I remembered the secret way up to that elevated roadway, up the escalator of the Hyatt. I dragged Chan up there. Only three other people were looking on. A man was pointing. I asked, "Who do we have here?" 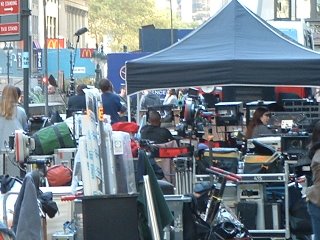 He told me. I couldn't tell. He said, "he's sitting under the tent." I still couldn't tell it was him. The guy said, "trust me, look at the ears, the mannersims, you can tell." He's in blue, right in the middle of this shot. 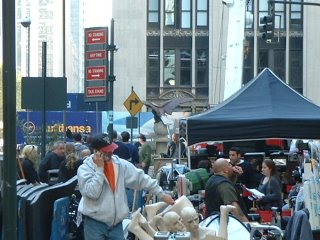 Okay, here he is, just below and to the right of the eagle, with lights illuminating the side of his face. That's right, it's suburb-friendly rapper turned action hero, Will "The Fresh Prince" "Of Bel-Air" Smith. 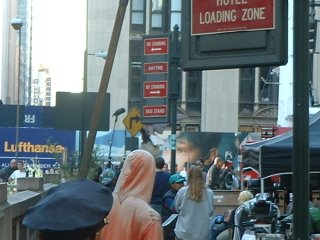 Here he his again, in the same spot. You really can tell by the ears. And, funnily enough, he's right next to a huge ear. 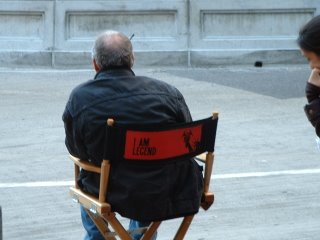 The movie will be called I Am Legend, and involves the Prince as the last living dude, ready to fight vampires. Or something. 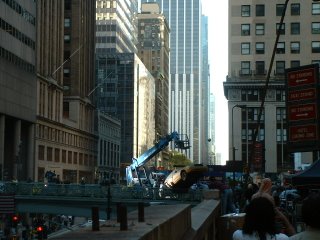 Here, the blue forklift brings the cab off its perch. 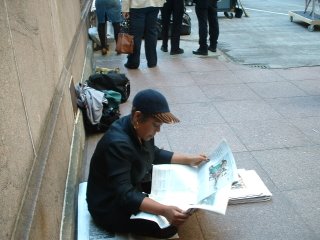 Channel 2 news anchor Roz Abrams was there! Her son was allowed to run amok around the filming area. I'm guessing she'll be playing a reporter in the film. 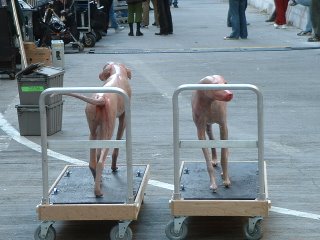 So these must be vampire dogs. Note the bleeding anus on the one on the left. 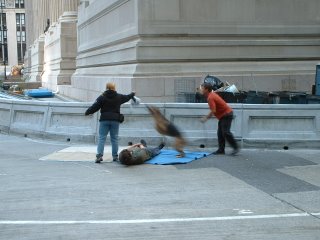 And I guess this dog will become one of those dogs. These people were making the dog attack this little thing they'd toss. This dog could kill you, my friend.

We got out of there, saw no French bowling at Bryant Park, took the train down the West Side, got to the store, and found out they stopped selling the marshmallows. Oh well. At that point we walked through the West Village, down to SoHo, all the way over and then back up the Bowery. I even got to go into the junk shop with all the huge old signs and other really big and weird stuff for sale. We went up to St. Marks, only to find that video game store, the one that sells old Atari and Nintendo games and video game marquees and Pac-Man cards had moved two blocks down. They actually had a stand-up Mr. Do! My lifelong dream is to have a stand-up Mr.Do! The sounds of that game bring back great memories for me. It was like Dig Dug taken to the next level. But it cost 900 bucks.

Then we ate Indian food on the same street, 6th Street, where all the Indian food places live, and the Indian dudes try to sell you on their specials as you walk by. The place we chose was pretty un-good, save for the appetizers. 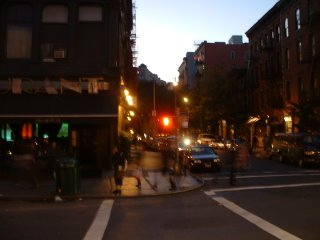 We'd earlier passed CBGB's. They'll be closing next week (was the the top story on boston.com today,for some reason), but there were kids outside, waiting for one of the final shows. I wanted to get a shot of the "Satan Don't Walk" sign across the street. Here it is from afar, with doing that "blurry walk" thing. 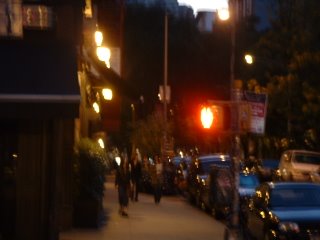 And even in the close-up, you can only tell the hand is in "hook 'em horns" position a little bit. I'll have to go back and get a shot in the daylight. But I think these blurred and dark pictures capture the CBGB's vibe perfectly.

Then we walked by Fred Armisen, wearing headphones. Then our legs stopped working. We were both limping from the walking. We took the 6 home.

Comments:
Jere, when you wrote that one can enlarge your pics to full screen by clicking, well, I've done it before but only got a slightly larger thumbnail...here, WOW! Full screen and brilliant...Every one! Great job. Enjoy the Championship Series. Oakland and the Mets...no logic involved.

Note: sometimes I flip on the high-quality-o-meter. You might want to go back and check, a lot of my old pics can go much bigger, and you can zoom once they're big-ified by clicking again. (The season-finale has a lot of high quality shots, like Hansack on the hill.) And actually some of the ones in this set are not high quality, but many are. Always clcik each one, you never know which ones can get really extra big.

Before we get to the '73 WS re-match, we have a rematch of the '72 Tigers/A's ALCS...first postseason series I ever remember watching on tv as a kid, and memorable for two things:

Reggie Jackson breaking his leg in particularly gruesome fashion while sliding into home plate (and missing the World Series);
Bert Campaneris reacting to a brushback pitch from Tiger pitcher Lerrin LaGrow by throwing the bat at LaGrow.

Several years later, when Campaneris was winding his career down w/the Angels, he signed an autograph for me at Yankee Stadium. When I showed my dad, he said something like "You're lucky he didn't throw the pen at you".

Good call on the green. However, it actually is pretty easy bein' Chan, for the most part, from what I can tell.

Here's something for you to look forward to, Jere; Arroyo saying he's planning on resigning with the Sox in a couple of years:

I'm sure the Reds are thrilled with that comment.

Red Sox Chick is all over it. I guess you can read my comment over there. redsoxchick dot mlblogs dot com.

Did you notice? No word verification! I turned it off for now. We'll see how much spam I get...