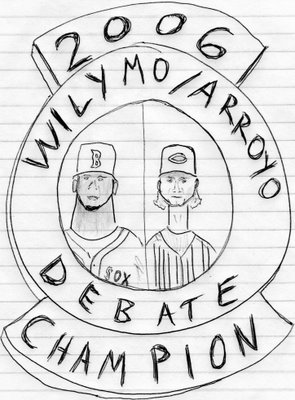 3.29 ERA. That's better, by 68 points,than any Red Sox pitcher on the entire staff who pitched 40 or more innings, except for Papelbon. Add a full run onto his ERA, if you want to account for the NL/AL difference, and he still beats everybody, except for Schilling.

His 240.2 innings pitched were the most in the majors. This was one of my big arguments when the trade was made. He's a guy that can give you a lot of innings. That's exactly what we needed with an aging, injury-prone staff. The fact that he could do this, while being happy to do it in any role and wanting to play in Boston more than anywhere, would've been a huge bonus. This, I feel, is way more valuable than what Wily Mo gave us in right field.

His WHIP was better than any of our starters. As many complete games and shutouts as our entire staff (that includes Hansack's 5-inning, complete game shutout).

I still say this guy can be a star. This season, he was considered a Cy Young candidate, until the last few weeks. But he'll still finish high in the voting. We will see what happens in the next few years with the guy.

Okay, he got injured. And he was there to fill in, admirably, for the most part, while other players were injured. I never felt he was comfortable in right field. Center field looked more like his position. But we didn't get him for defense.

We were told of his mega-home runs, and we saw a few. When he gets a hold of a ball, it's amazing. Has to be one of the hardest hitters ever. But he only had 11 HR, and his HR rate dropped for the second year in a row. His slugging also went down for the second straight season, though it was third highest on the team. (But still nowhere near Papi/Manny levels.)

We were told the now fired Papa Jack would teach him patience and discipline and whatnot. His average did go way up. His OBP went up, too. Both were his highest ever. But still, .349 OBP, that's 24 points lower than Trot Nixon's. And, by comparison to a really awesome dude that he's supposed to become, 90 points lower than Manny's. He was third on the team in SLG and fourth in OPS.

Two years ago, the year he had the most ABs of his career, Pena struck out at a lower rate than he did this season. He had the twelfth most at bats on the team, and the fourth most strikeouts.

He improved a little in the walk department, but 1 every 13.8 AB isn't so good.

I thought he was inconsistent at the plate. Streaky, I guess. Extended slumps came at bad times, like against the Yanks, who he didn't fare well against. I divided his season into four parts. Look at how he batted in each part:

It all averaged out to about .300, which is good. But it's like he falls asleep for big chunks of time. Hopefully he starts evening everything out and he improves overall instead of going downhill.

People think we gave up on 2006 when we got rid of Wells. I think we gave up when we traded Arroyo. Which doesn't mean I don't know why they did it. I am glad to belooking toward the future. I just thought keeping Bronson would've kept us in it, to the point where we would've had to keep trying, in this particular season.

This is the downside to our team being in a "win now" city. Had we gone all out, and admittedly given up on this year from the start, we'd be in much better shape right now. Maybe we'd still have Marte, Mota, Sanchez, Ramirez, Meredith, etc, etc.

The key, though, with this debate, is next year and beyond. I am hoping that you Wily Mo people win the championship in every year from '07 on.

Comments:
Well, I'd lay waste to a number of these flawed arguments, but what would be the point- I apparently lost the "debate."

I like to look at this as a WMP/Trot debate. And that is NO CONTEST. Bring back our right fielder for an acceptable to both sides two years, and maybe that will give Wily Mo time to learn to play right field at Fenway. With Trot as his teacher!! Can anyone disagree with that? If so, come on!! I'd love to hear.....

And BS, I emailed you about LOST, without giving anything away because I am just about to watch it now, Thurs. morn.

The debate was all year long! This is just the proof that I have clearly won. Winner! The bage has been awarded. I'd love to give it back and continue the debate, but the award committee (myself) won't take it. They (I) have made the official call.

I'll acknowledge that the Arroyo/Pena trade most likely hurt the Sox in 2006. I don't believe that it was even close to being the reason they didn't make the postseason, however.

Bronson had an excellent first half, and a pretty good second half. He still got knocked around by lefthanded batters, and was a fair amount better at home than he was on the road. All that tells me he that if he had stayed, he would have likely continued to get pounded by the Yankees, particularly at the Stadium.

If you're going to point out that Wily Mo had a lower OBP than Trot, then you also have to acknowledge that he had a vastly higher slugging %, and had more homers in over 100 fewer abs. And of course, he's 8 years younger than Trot, who has been steadily losing power, and who is chronically injured.

And it's very unfair to claim that anyone believes that he's going to become Manny Ramirez; I don't of anyone making that argument.

I do think this trade will look better for the Sox going forward. I wish I could say the same thing about the Beckett deal.

I forgot to mention the whole thing about Wily Mo inexpicably hitting righties well and lefties not well.

Oh, and just google "Wily Mo superstar" to see what people thought of him, including stuff like this: "With Papa Jack and Papi providing pointers, Willy Mo could be our superstar RF of the future and with Papi, Manny, and Willy Mo in the line up, you could almost pencil in 120+ HR’s a season right there"

Come on, you all said it.

I think the drawing came out too "serious." I was gonna do my usual cartoon, but I figured for them to be recognizable at all, I'd have to at least look at a picture of each. And they really look like them! Especially Wily Mo. Not even the fat neck/skinny neck thing made it cartoony enough. And the whole thing was supposed to just bring some humor into this debate, but I messed it up right from the drawing. I think I'll award myslef a new, more cartoon-y badge.

Still, though, it is kind of funny how that REALLy looks like Wily Mo!

They both look a lot like each guy, actually. Easily the most convincing part of the post!

Seriously though- you got them both perfectly.

Yes, the likenesses are uncanny. Great drawing. I still say your greatest work of art was your Cosby overdub...seriously, they should find a way to exhibit that video at MoMA or something.

I concur that the drawing is really good.