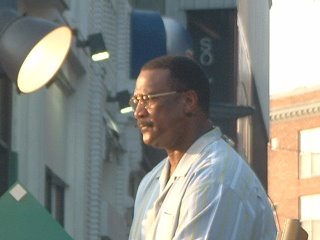 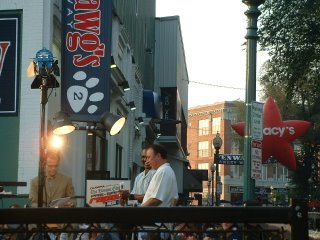 Remy with Rice and TC. 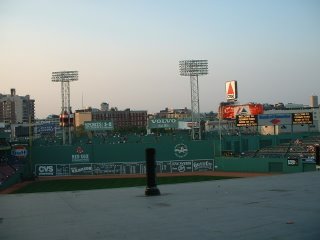 Another view that used to not exist. 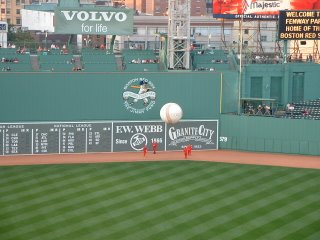 It was Macy's Day at Fenway. Okay. I guess they brought out a big baseball balloon because people associate Macy's with oversized inflatable objects. 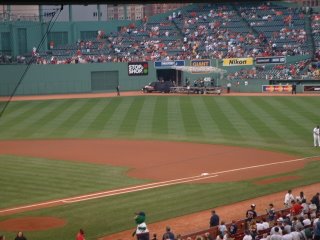 The Standells played in center field. I heard them announced and I was psyched. But hardly anyone clapped. Then they broke into DW and people figured it out. Why they were there for Macy's Day, I don't know. 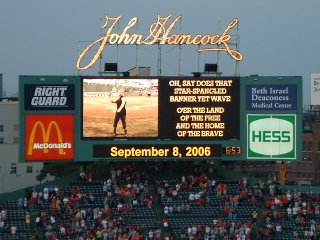 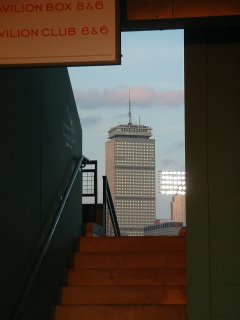 The Pru from the walkway behind the 3rd base pavilion. 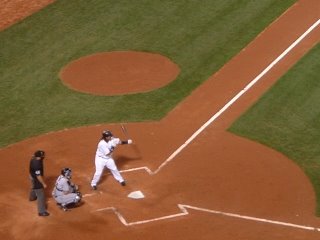 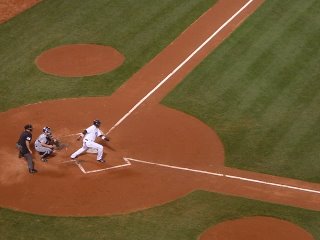 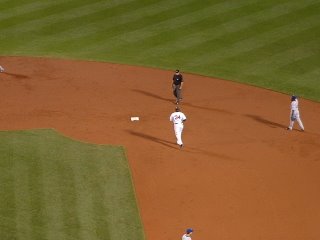 Papi pulls into second with a double. 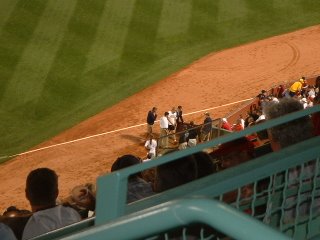 Two dudes on the field in the last two games I've been to. This guy came out of the grandstand in the third-ish inning. At least wait til the eighth, dude! 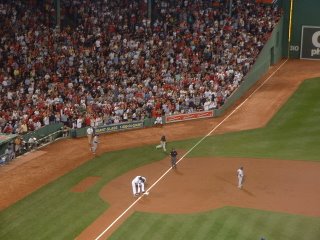 Ortiz has just tripled. You can see Royals personnel heading out to center field to tend to the injured outfielder. 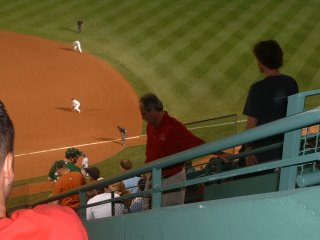 We've moved from standing room to seats at this point. My second time in the pavilion, and both times Larry Lucchino was walkin' around up there. 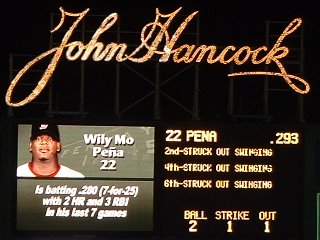 Wily Mo doin' what he does best! In fairness, he hit a key double on this at bat. 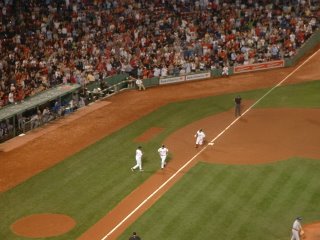 Tek rounding third on his homer. 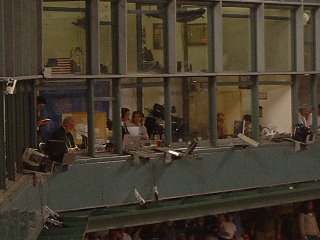 Trup, under American flag. Orsillo a few windows to the right. Castig and Remy are hidden. But it was cool to turn around and look at the TV on the pavilion while they were showing Don and Rem and then turning back and watching them in real life from a weird side-angle. 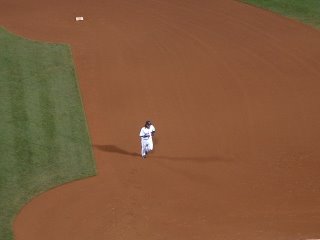 Manny coming off the field. 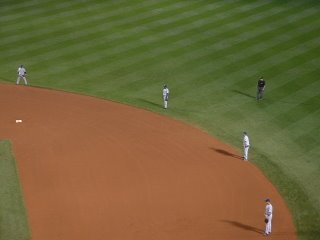 The Royals, you know, shift to the other side, as Ortiz bats. 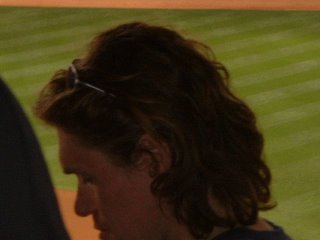 Finally, this Willem Dafoe-looking dude was up in the pavilion, with a Dafoette. We were convinced these were the adult children of Dafoe. But I looked it up, and he only has a son, Jack, who looks nothing like this guy.

I have this knack of sitting at events right in the spot where the most annoying person or people in the entire venue are. It was no different on this night. In front of us, a group of older hippie-ish men standing the whole time, trying to get us all to cheer. I'd appreciate the effort, except that their leader was so busy facing the rest of us, waving his arms wildly and attempting to start chants that no one in their right mind would have any interest in joining, that he missed half the pitches thrown. A guy like that is no friend of mine. He's looking at me accusingly, telling me I'm being too quiet. Meanwhile, I care enough about the game to watch each pitch. This reminded me of the time a dude in the grandstand was yelling across the alleyway to us, in the bleachers, what a bad crowd we were. I, sitting right at the edge of the bleachers, was getting the brunt of it. He kept screaming "worst bleachers ever," and doing mis-timed, solo "Let's Go Red Sox" chants. I always want to tell these people: "If I want to be told when to cheer, I'll go to Yankee Stadium!"

And behind us, it was the loud, drunk contingent. They must've sold out all the 20 dollar SRO, so the last drunken stragglers got the 25 dollar pavilion SRO. Besides them, to the left were the "let's talk really loud so everybody hears how witty we are" college crew. This dude acted like he knew everything, but then pointed out that he can't remember any notable Royals--in history--besides George Brett. (He added, "I think they had Rollie Fingers.") At another point, the last out of an inning was made, after our pitcher had given up a few runs. I, along with almost everybody else, clapped for the nice play, then stopped. Cool guy, though, in his semi-drunkenness, looked down and saw our pitcher leaving the mound, heard cheering, and said "You don't cheer him" right next to my ear, making me out to be some dumb fan, when it was really he who didn't realize we were all cheering the nice play, not the pitcher.

I looked around while the loudies were louding and the drunkies were drunking and the hippies were fake-cheering. I looked at all the other sections. People, sitting, focused on the game. Everywhere else. This luck I have is well-documented. People who go to an event with me know to expect it. I'm not saying you should go to a ballgame and sit quietly. But pick your spots! This isn't Manchester United against... Manchester... Divided. Hey, that means I have a theory. Those soccer fans aren't more into their teams then we baseball fans are, they just like to make it look like they care. Hell, soccer has even less action than baseball. It all makes sense. They couldn't be cheering for each meaningless pass. I think this theory holds water.

Comments:
I must admit, that WMP picture was laugh-out-loud funny. Good show.

Also- was in Binghamton NY this weekend for g/f's b-day, where we went out and saw... Martha Reeves and the Vandellas. I had no idea she was at Fenway the night before.

Wow, so we both saw Martha Reeves live on the same weekend. That will probably never happen again.

And Jere, when you wrote of your proximity to havoc- causing fans, did you read Cyn's account of her "adventure" at Fenway. If not, please do. Unbelievable. Take care.

Yeah I read the whole account. I was actually gonna tell her that I thought Larry would be nice about it if she got to talk to him. Looks like her friend did talk to Larry and he was indeed nice about it, which was cool. I also saw the pic of them, in sec 43, row 7-ish, seat 9 on the Remy board. Dear everyone else, we're talking about redsoxchick.mlblogs.com.

Yes! And your pic of Jim Ed is an understated classic.

Football's not a matter of life and death ... it's more important than that.

So...we care. I don't know if more than you, but certainly a lot.
(BTW Our Football = Your Soccer)

Great blog, I'm reading it now for some time. I do not comment, because, since I'm european, I don't know much about baseball. But I like it, something rare over here.

And since I don't know much about baseball you certainly know what team I choose to root for...:-))))

Wow, a European Yankee-liking soccer fan. You're the bizarro Jere. I'm glad you read my stuff anyway. Thanks.

Anyway, the Weapon of Misguided Perception, starting Aug 16th, went 1 for 19, then 5 for 10, then 3 for 16, and currently 4 for his last 5. I'd say he needs to work on his consistency. Consistently. By the way, you sure the OBP is lower than the avg over the last three weeks?

I could find you so many stretches like the ones you just pointed out for hitters better than WMP it'd take days to type em all out. A little inconsistency is a patented part of baseball, especially when you're in and out of a lineup that's competing for absolutely nothing.

Jere, the lower OBP than BA is the result of the fact that he had zero walks, but one sac fly, over that time period...thus, 10 ABs, but 11 plate appearances.

I'd like him to continue to improve and become more consistent too, but that doesn't look like extreme variation to me. Lots of guys who are considered good hitters go through similar streaks. 50 ABs is a pretty small sample size. My only point from my upthread comment was that he's been pretty good of late, during a period when the team's overall offensive production has been, you know, offensive.

Er, make that 28 ABs, but 29 plate appearances over that time frame (he had ten hits).

wow, so he really is in that Twilight Zone over that stretch. I remember talking about this with Andrew in 12-Eight (as opposed to ON 12-Eight) once, how you can have a higher avg than OBP.

Anyway, even without the stats I've been watching the guy go really really shitty and then have really good stretches. Seems like he's always doing that. So you can never get a read because if he's going well, you can look at the last three streaks (good/bad/good) and say he's been doing well, or you can go back one more (bad/good/bad/good) and he's not doing so well over all. And Miami Vice Versa Tile.

And my main point being, I guess, kind of, that until those last 5 at bats, he was 9 for 45 =.200. So, two days ago, you could only say he's doing poorly over the last few weeks. Whereas two days later, the whole stretch looks a lot better.