Monday, September 4th, 2006. Labor Day. Night game. Terrible. But as long as Big Stein keeps crankin' that money machine, the rest of us will be forced to play as many night games as possible in an attempt to keep pace, revenue-wise. Waiting for gates to open on Yawkey Way, Empy nudged me to point out the wacky doll in the arms of the woman on the other side of me. I looked over to discover it was Cyn, aka Red Sox Chick, who was there with Triumphant Sox Fan. Weird. She told me they were in the pavilion. I later spotted her from my seat in the bleachers with the zoom on my video camera. 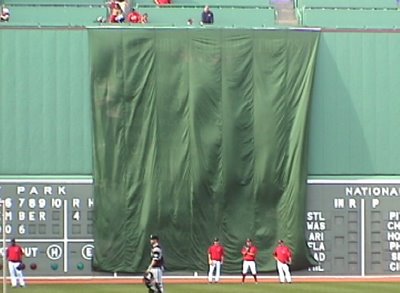 The Monster had this mystery cover on it. More on that later. I'd also like to mention this game would be my fourth walk-off win at Fenway--this season! 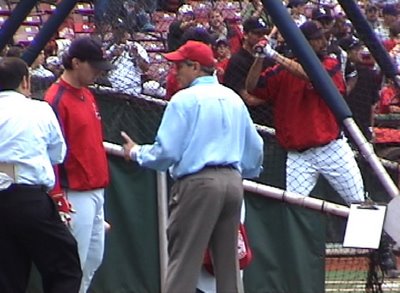 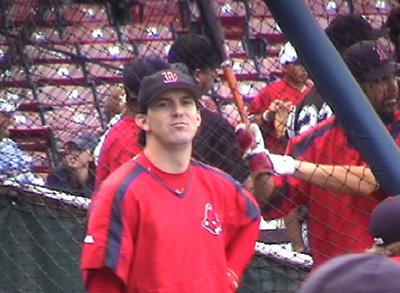 Trot started gesturing at someone. Me? Empy? 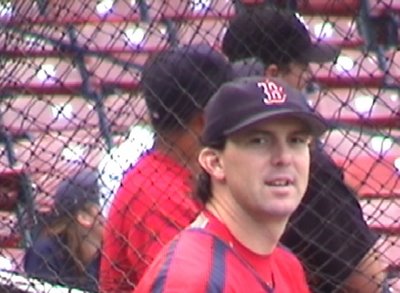 Empy starts saying, "I got a picture of Trot making a funny face." "At us, I think," said I. It was really getting weird. I finally figured out it was someone ahead and to the left of us, but these still look pretty cool, like he's making faces for the camera. 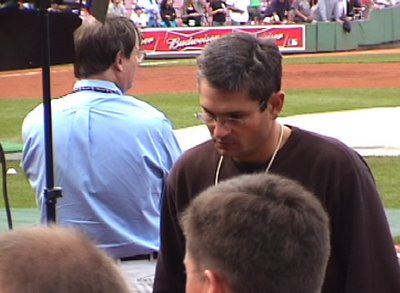 I said to Empy, "That guy looks familiar." "Duke Castiglione," she told me. What a moron I was on that one. Jesus to Joe's God, right in front of me, and I didn't recognize him. 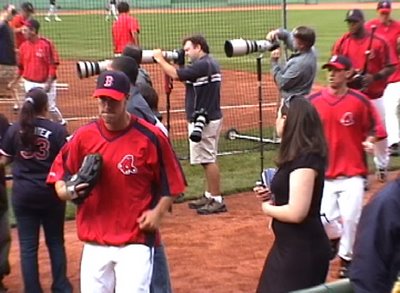 David Murphy. I took pics of this dude the previous week on the same field, only he had a PawSox uni on. 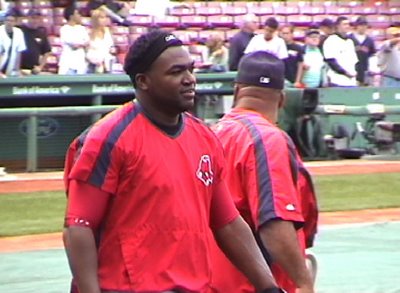 I had hoped Papi would return that night, but it would be the next night. 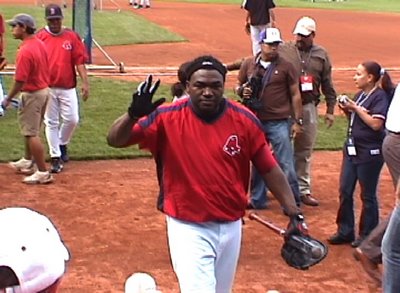 He did take BP, though. And, like Trot, he looked right at me. And by "me" I mean someone near me. 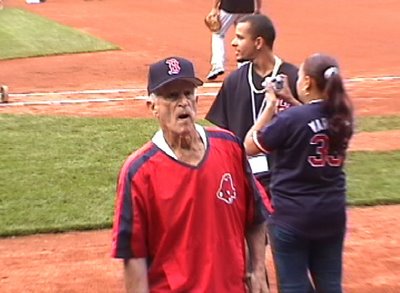 Pesky tosses a ball to a fan. He's probably still mourning the loss of Charlie Wagner. While I'm talking about that, I should mention that TC's father recently died as well, as did 32-year old NESN videographer Jason Gagne. Sad. Back to non-dying news, have you seen Remy and Don talking about that kid who modeled the brown NESN T-shirt? That's some funny stuff. 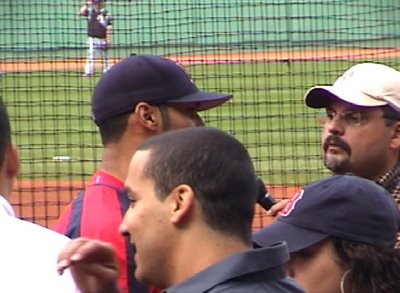 Carlos Pena is shown here, barely visible, getting interviewed before the game. "Will you hit a walkoff homer tonight, hometown hero Carlos Pena?" "Yes. Yes I will." 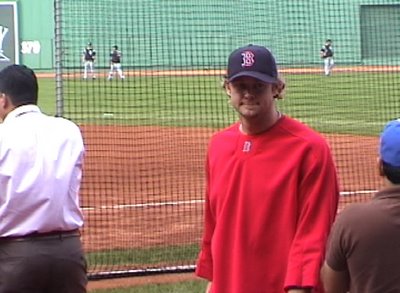 Kyle Snyder, aka Newbronson. He just gave up a homer to Thome, as I wrote that. 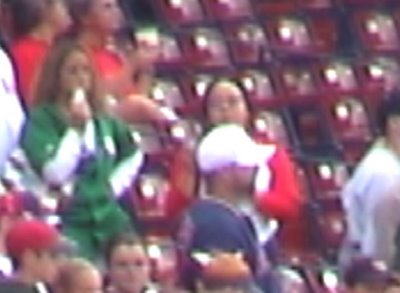 I headed out to the bleachers, while Empy stayed by the dugout, so we could attempt one of my lifelong dreams: To take a picture of someone I know from really far away. She attempted to take mine using her new camera's zoom. Can you find her? Clue: She's neither the girl in the green shirt nor the guy in the white hat. 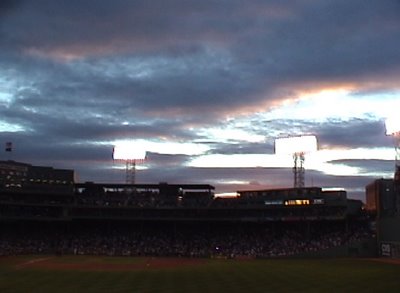 It was an okay night weather-wise, but the breeze had me shivering by the late innings. But Fenway looked beautiful at twilight as usual. 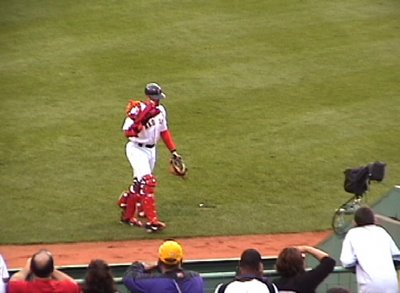 You've seen it on every Sox blog including mine. The shot of Jason heading out to the 'pen. But on this night, the night of his return, he raised his mask and shin guards at the applauding fans. 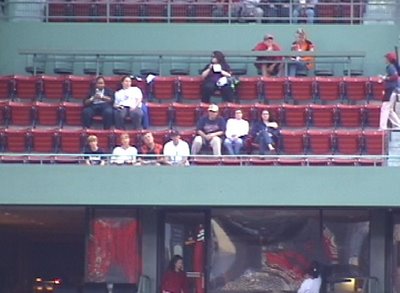 I scanned the pavilion, and found Cyn. Her three friends must've been getting beer or something. She's the one person in this shot who's by herself. You can even see the green doll. So I got to live out one of my L.L.D.'s twice in one hour. 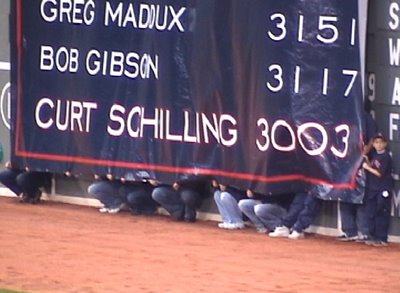 I missed the unveiling of the mystery banner. I was waiting for the fried dough to come out. I did get this shot of it, though. Turns out it was in honor of Schilling reaching the 3,000 K mark. Congratulations, Schill, you're at the bottom of this particular list! 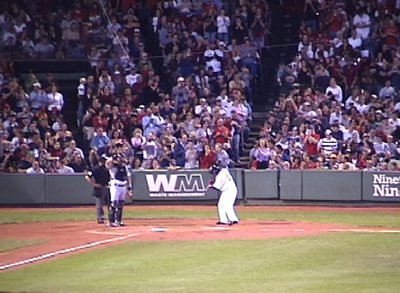 Manny is introduced for the first time in a while at Fenway. (When he took the field, he came out last, instead of the usual ten seconds before the rest of the team.) He was cheered wildly, as could be expected, unless you're the moron I heard on EEI on my way to the game, who suggested there'd be a smattering of boos, from the people who thought that Manny faked an injury for like two weeks. In fact, I heard McAdam say that if there was a gun to his head, he'd say Manny faked his injury initially. I'd like to see Manny take that guy down in some sort of cage match and then accuse him of faking his broken neck. Hey, man, sources close to the situation who I absolutely refuse to name say you're fakin', buddy. [Note to children: Cage matches don't happen in real life. Do not assault your local newspaper reporter.] 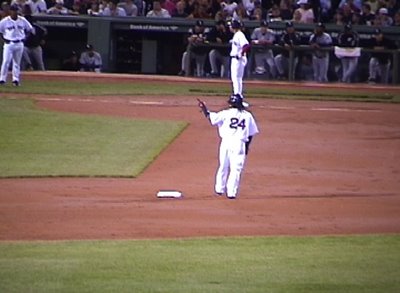 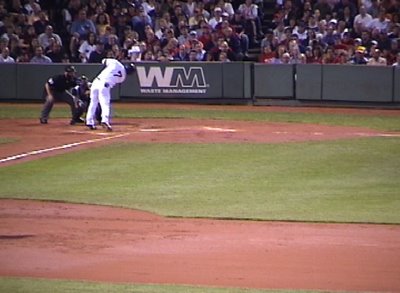 Trot also got a great ovation after his long absense. In his first at bat, he got hit by a pitch. (You can click to N-large, but they're almost better at this size. But you be the judge.) 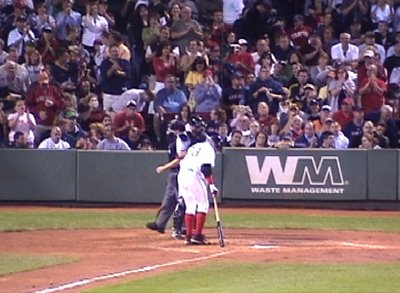 And Tek made the third retirn of the night, getting the loudest ovation. 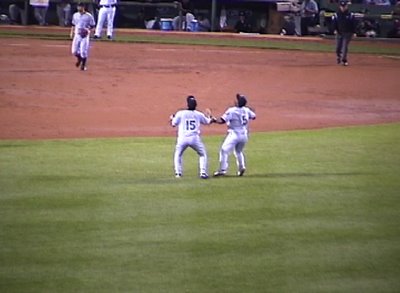 Here, two White Sox do some kind of dance.

Okay, now I'll add yesterday's post to this one. Ignore the lines about pics not being able to load. They're all here now. Everything below this paragraph was originally posted on September 5th at 9:50 PM. The original post with its comments (including some good stuff about fans going on fields) will stick around, two posts below this one

I can't take it anymore. Waiting for my pics to upload to Blogger. So I'm going to just give you the few that worked for now. Fortunately for you, I started at the end. So besides this picture of Dennis Eckersley... 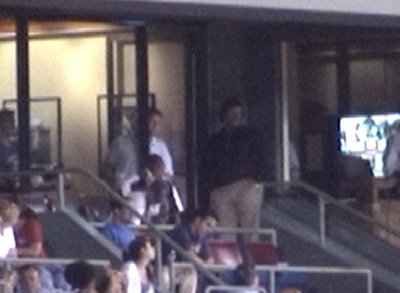 ...everything you see will be related to the walkoff homer by Carlos Pena. 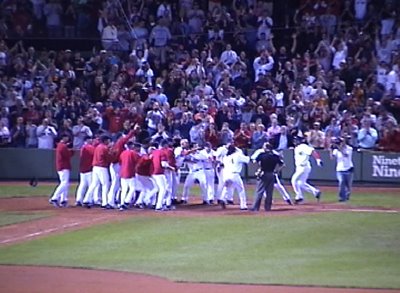 Here he heads for home. This is where I started filming (these are stills, click to enlarge and make more pixelated). I let myself enjoy the moment before reaching for the camera, which is a good thing to do. 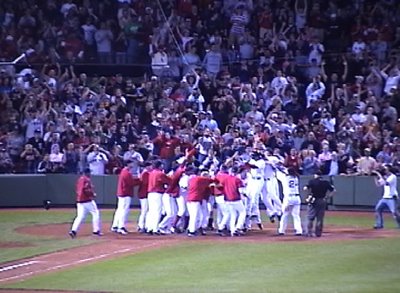 Manny mistook the initial jump as the main jump, costing him a chance at celebrating mid-pile. 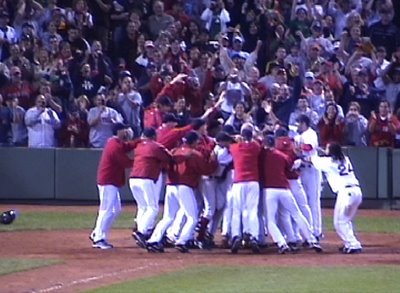 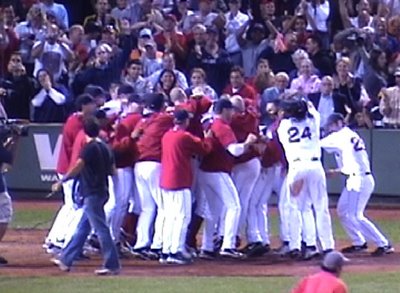 A few more celebration shots. I don't know if NESN said anything about this, but some kid came onto the field and tried to celebrate with the team, I guess. See the below shot: 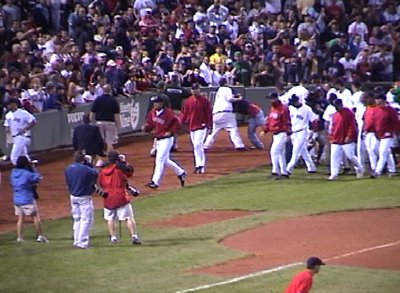 Just to the left of the pile (which features Wally, sneaking his furry face into the frame, at far right), you'll see the security guy in white shirt and tan pants. He's in the act of tackling/pushing this hooligan toward the side wall. He essentially checked the guy into the boards, while nearly, it appears, losing his pants. 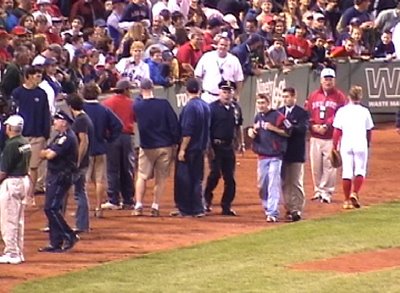 The dude landed in the crowd after going head over heels over the wall, and after they pulled him out of there, they carted him away.

I'll try again to add the rest of my pics to this post tomorrow. In the meantime, we're steadily gaining on the White Sox if no one else. Another win tonight, and we are in good shape again. Considering. And by "good shape" I mean "kinda okay shape." But I am still hoping. I think these guys can do it.

Went to this game with Empy--check out her review of the game.

Comments:
Anibal Sanchez just threw a no-hitter. Good for him, but... ouch. That hurts.

With Hanley making a nice play, and the play to end the game, and seeing that dick Girardi all happy after the game...yeah, hurts a little.

Why's Girardi a dick Jere?
Because he was a Yankee, or because he carried over some grooming rules from the Yankees?
He's doing one hell of a job with what he's got after Loria gutted the team after hiring him. You're an ass Jere. I would love to debate with you in person sometime.
(And no, it's not because I want to have a physical confrontation, it's because I'd like to be looking you in the eye when you spew off the stupid shit you do.)

No one's going to want to debate you if your opening argument is "you're stupid." When are you going to figure that out?

I never said you're stupid Jere, you're far from it. You're just hateful and illogical, my question is why do you consider Girardi a dick? He's respected around the majors as a guy who worked his ass off as a player, and always wanted to win. As the Marlins players know he is strict and takes no bullshit. But I guarantee you that the entire Marlin roster would go to war for him. So my original question, why is Girardi a dick?

"when you spew off the stupid shit you do"

"I never said you're stupid Jere"

(And, no, I'm not missing the irony that I do have a picture of an actual donkey next to my name.)

Ummmmm, getting back to your pics, Jere, I thought the twilight shot was a masterpiece. With a little more resolution, it would make a great 8x10 picture for my desk. Nice! Oh, and the other stuff voiced in these comments, I will leave up to you. Good job, as always. Thanks for stopping by my blog. Without you reading once in a while....trouble! For me. And for any of your readers, pro or con, please look for my link. I'm listed on Jere's link list, with my first name in the blog title. Thanks. Onward into September, the month that Papi WILL traverse that canyon called 50 home runs. And then he will go beyond. Fenway will go nuts. Me too!

"Why's Girardi a dick Jere?
Because he was a Yankee, or because he carried over some grooming rules from the Yankees?"

One can be an ass, or say stupid things at times and can still be intelligent.
On the other hand, in the words of a simple man; "stupid is as stupid does."

Grovy pictures, Jere! Love the one of me and "Lester Jay" (he's a frog in red sox clothes with the coolie leather jacket and Timlin shades)!

And, for the record, I agree whole-heartedly about Girardi. First year as a manager and he decides to treat his players like they're all 12 years old because it's "The Yankees Way". Screw him. In your words, TJ.