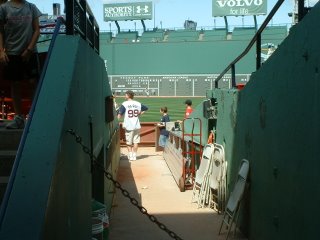 Looking down Canvas Alley at the Futures at Fenway doubleheader, August 26th, 2006. Click any picture to anti-small-ify.

There were eight bloggers in attendance that I know of: Me, Witch, and Twitch sat together. We got to meet Red Sox Chick and Triumphant Sox Fan, who also went together. They were both very cool in person. I'd only known them in e-form. 12Eight was there with his dad, in neither section 12, nor row 8. We chatted with them and even more of the 12Eight family. Empy was there, but she was above us in the pavilion. That's okay, I saw her last weekend anyway. And the world's leading PawSox blogger, Baseball Heavy, supposedly was there, too. She is a woman of mystery. Witch and I looked for her, despite not knowing what she looked like. The chance of spotting someone out of 30,000 when you don't know what they look like is about 0%. My guess was a girl in a green shirt that said "Farm Fresh Wheat" or something. 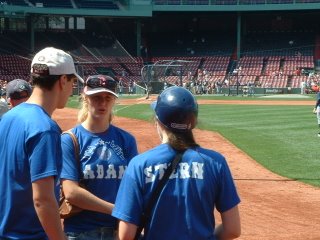 I swear I didn't pose these Adam Stern fans. 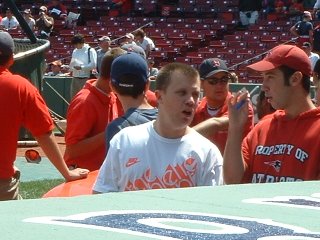 The big dog was there. This dude is the leading Red Sox autograph hound. Go anywhere near the players' parking lot before or after any game, and you'll see this dude. I think this is his job. Here he goes for ultra-valuable Single-A autographs. 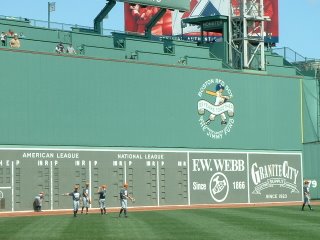 Here, an Oneonta Tiger tries to look inside the scoreboard. 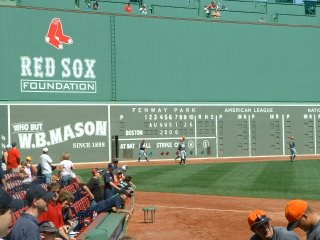 Of course, they all started going in to sign the wall in there.

Insert jokes about there being no tall buildings in Oneonta. The warm up shirt for Oneonta looked like it was the same quality as my "Jim Grote 2nd Annual Billfish Tournament 1985" T-shirt. 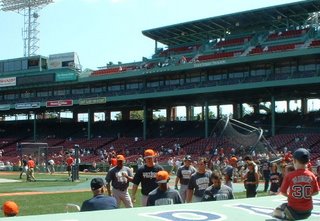 A little kid looks at the Oneonta Tigers. Who were also little kids. 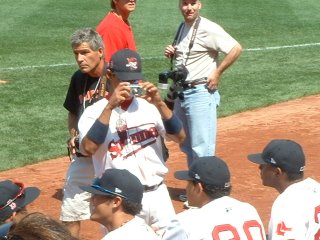 I photographed the Spinners, who were photographing each other. 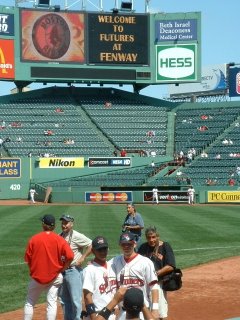 And again. When the Spinners took the field, they sprinted. It was do great to see these guys so appreciative of getting to play where many of them would never play again. 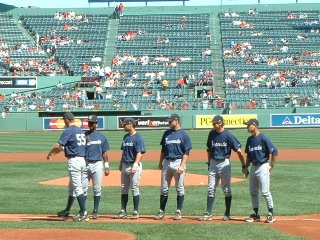 The Oneonta Tigers. The manager, at right, is former Detroit Tiger Tom Brookens. Tom is best known, to me, as the guy who had a box put in front of him on a pop-up by a ball boy. 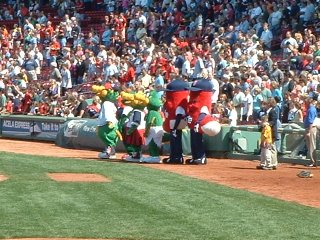 Mascots were abound. Here they stand, big hands on hearts, for the anthem. 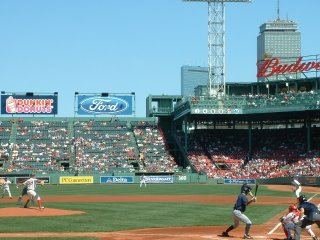 I sprang for the 20 dollar seats for field box, 12 rows off the field. 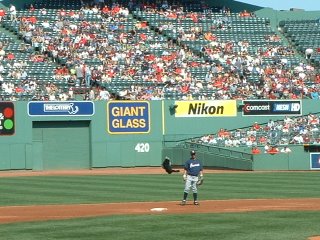 Lowell has this frisbee dog. He actually missed a bunch, but caught a few. 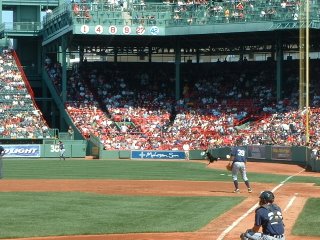 And there were actually two different frisbee dogs. Here's the moment dog grasps frisbee. Actually, both pics capture that moment. 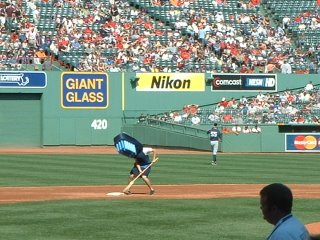 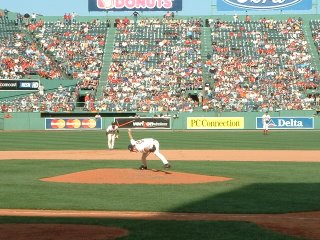 This and the next two are the young Pap. 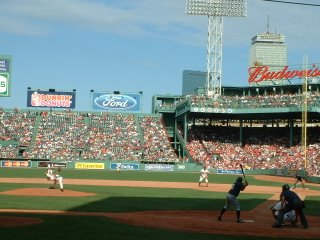 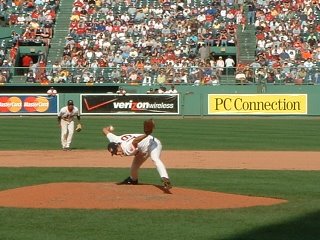 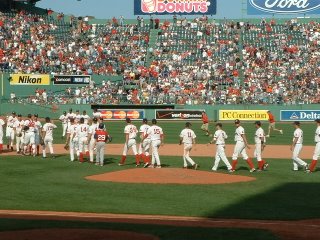 The Spinners are, you know, the ones who won. 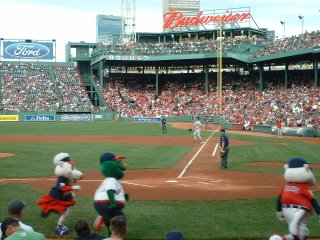 Mascot race, above and below. Wally lost. But he showed some really amazing breakdancing skills atop the dugout. I'm not kidding. 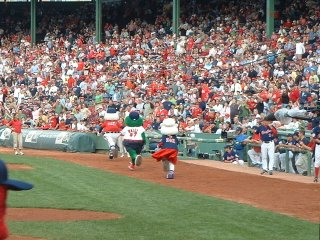 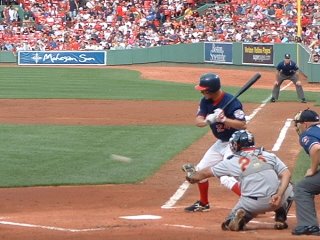 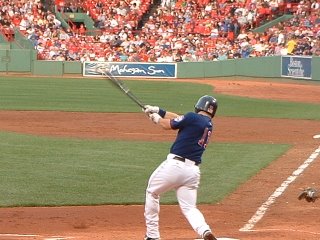 The Australian, Trent Durrington. Yes, they played "Land Down Under" once before he batted. 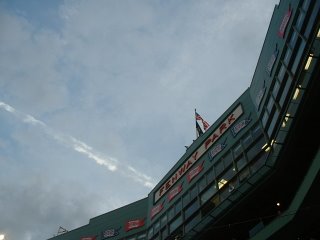 I liked the gray, white, and blue of the sky here. 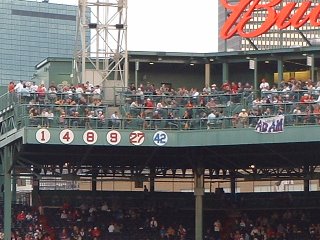 As close as we'll ever get to seeing Adam Stern's number retired. I'm sure this was done by the same people pictured earlier. Stern didn't play. Well, we left in the eighth, and he hadn't played yet. 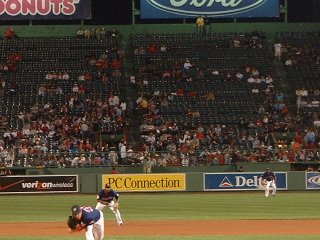 We thought the crowd would get bigger for game two, but no. It was actually cold that night. Skinny me was shivering. My attempt at eating more junk food to gain weight has failed. I think that guy from Stephen King's Thinner brushed my face without me knowing. 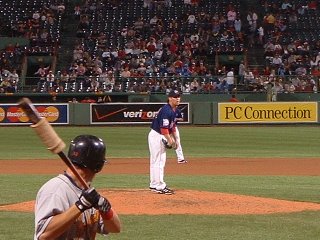 A Rochester Red Wing waits his turn on deck. 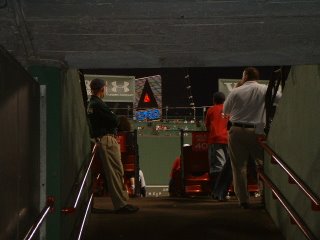 On the way out, I captured the Citgo sign as seen from underneath the stands.

This was fun. I heard it called the "first annual," so I guess they'll do it again. Nice. I look forward to it. Then again, I'd look forward to any event that allows me to sit in those seats for 20 bucks. I really wanted to see some kid homer. Apparently, one did, after we left. To win game 2, for the PawSox.

Comments:
That was actually former Northeastern star Carlos Pena that HR'd. He's had time with OAK and DET (was supposed to be Giambi's replacement after he signed in New York, and then was part of the NYY/ DET/ OAK Jeff Weaver deal after he struggled). Then, he was called up for last night's game.

Also, FYI- it's David Murphy, not Matt. How'd he look, by the way? I was supposed to go to this too, actually, but I had no car to drive. Which sucked.

He did look really comfortable at the plate. And Pena did, too. I'm pretty sure it was him who actually nearly homered deep to right earlier. And then I just briefly saw on the news that night that somebody HRed to win the game. And, yeah, then I saw him last night, and the A's announers seemed to be laughing at the fact he was playing. He did make that great try on a foul pop. Too bad you couldn't go! I would've given you a ride! (had you been willing to go Friday and return Sunday, and had a place to stay.)

Shit, I should have asked you. I actually totally forgot you were going.

Hopefully they make this a yearly practice. It's just such a great idea, and seemed like a fun time.

FRIGHTENING to think that even gives me pause. Damn.

I may not have mentioned I was going until the day before. Unless I said something when I bought them months ago, which is a good possibility. About the lineup--I said something similar on Joyofsox last night when I saw it...

Hey, cool pics, thanks for sharing. I went to my first minor league game in Oneonta - saw the O Yanks play the Elimra Red Sox. The closest thing I'll have to a religious experience.

Also, our lineup is very sad.

Note: It wasn't Brookens. It was Darnell Coles. TJ by me.

Hi there,
this is extremely belated but I just stumbled upon it now! thanks for the pictures (especially the one of our Adam sign from your seat!) what a great day futures was. sounds like you're not a huge fan of Adam, but nevertheless, thought I'd say thanks and probably scare you even more with the fact that we have an online presence! Take care.

Thanks for writing. And, as I have told you on your blog, I AM a huge Stern fan. My comment about his number being retired--I just meant that IS what I'd like to see some day, but that indeed the odds are quite high--especially now that he's on the O's :(