Went to Battery Park tonight. The place that's "down." 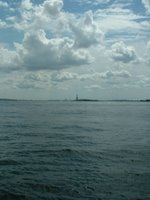 Lady Liberty was still there as expected. The noblest clicking embiggens the smallest pictures. 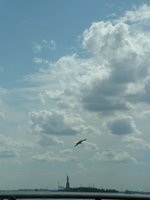 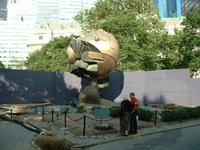 Fritz Koenig's sphere that had been in the plaza of the World Trade Center, bruised and battered but mostly intact. And now a home to birds who don't know the difference between Bin Laden and Ian Bladergroen. 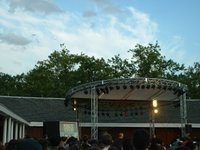 I was down there (with Chan, dragged him along) to see the Mates of State show at Castle Clinton, which was built for the War of 1812. By Joe Pepitone. 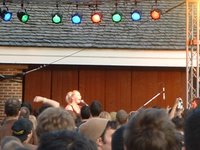 Not exactly set up for concerts. Even raising the camera wasy over my head, these were the best shots I could get of the band, which consists solely of a wife and husband. 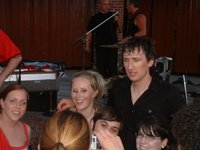 Here they are after the show, posing for someone else's photo. 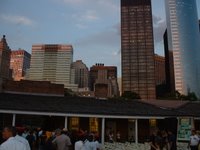 Looking over the wall of Castle Clinton, from inside, at lower Manahttan. It's less of a castle and more of a hollow ring. 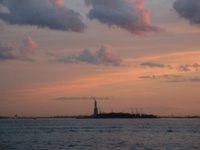 True Sounds of Liberty, after the show, as the sun settededed. 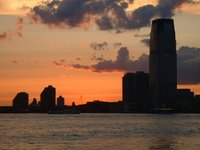 And just to the right of that, Jersey. I hope your computer is, like, color. 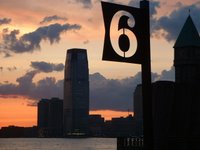 How sweet is this 6? 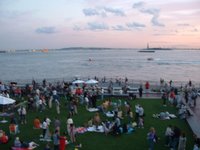 As we started to leave the park, we heard some blues music playing. It was a different show, right nearby, at this mystery field, with a little area you could climb steps to, for this sweet view. (I also saw some opera singers this afternoon at Lincoln Center, for work. So I technically witnessed three different concerts in seven hours.) 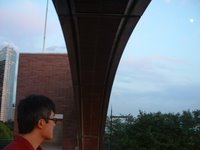 On the platform I took that last shot from was an arch. Chan suggested I get the moon and the arch. Done and done, Chan, with you in the shot, too. 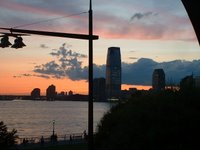 One more shot of the sunset over Jersey, from atop the mystery perch. 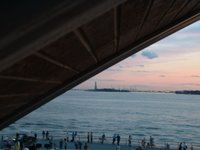 Then we ate at Zen Palate. Then we went home. I didn't want to look at the Red Sox score on the internet, I decided it would be "better" if I just let it come on ESPN naturally. So, I waited for it, and up it came, 12-5 us. A blowout, I thought. Then I found out it was close in the ninth. A win is a win, though. Still 3 up on the nuclear missile testers.

Comments:
Gorgeous shots! I love the 6.

Thanks, both. I also forgo to mention that I saw John Norris at the mates show. Remeber that guy, from MTV? He was, like, the link between Martha Quinn and Carson Daly. Or a hip version of Kurt Loder, who wasn't really that hip.

Neither one could hold a coolness candle to Adam Curry...and isn't it funny that 7-degrees-of-the-obscurity Matt Pinfield, late of 120 Minutes, now hosts the VH-1 countdown each morning, giving us the 7-degrees routine for the likes of Kelly Clarkson and The Fray? How the mighty bald have fallen...

The last time I saw matt Pinnfield was that Best Buy commercial where he bragged about how we should shop where he shops because "I know the bands, I hang with them..." Can't believe he's still got a regular gig somewhere.

I'll never forget his band interviews, which almost to a band featured members snickering at him on camera.

"Hi, this is matt Pinfield. I'm here with Dave Grohl. Now Dave, you're from DC, home of Henry Rollins, who of course sang for Black Flag, whose logo is tattooed, albeit temporarily, on the ass of the singer of Urge Overkill, who as we all know are featured on the Pulp Fiction soundtrack, which also features, of course, Dick Dale, who shares a name with a legendary chipmunk, not to be confused with that other group of chipmunks, The Chipmunks, who recorded a hit Christmas tune back in 1961."

"Is there a question, Matt?"

"Not to mention the fact that Henry Rollins quit his job at the Haagen-Daz in Georgetown to join Black Flag, leaving Ian MacKaye, the store manager, in the lurch for the busy weekend, and Ian of course is a notorious straight-edge pilgrim, so Dave, why do you smoke?"

Kurt Loder's actually a great writer, and pretty hip guy in his own right. Maybe hooked onto MTV to pay the bills, etc.- who knows.

He wrote an article about Iggy Pop about fifteen years ago that's one of the best pieces of music writing I've ever read. His liner notes on the Led Zeppelin box set are pretty great too.

"Or a hip version of Kurt Loder, who wasn't really that hip."

Meaning Norris wasn't really that hip. Like, they had the serious news guy, Loder, and started using Norris for news so preteens could relate to the Pearl Jam/Ticketmaster issue better. But it didn't work, cuz Norris was a bit of a dork.

I liked when Loder interviewed Jewel, and ripped her for all the incorrect grammar in her book of poems. And his Nirvana work, of course.

Jesus, that's right- that was FANTASTIC. He went right at her. Awesome.