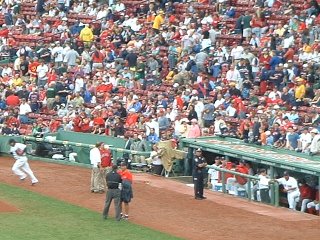 Ten-game plan, game number... I don't know. Was the classic duo, me and Pat, in section 43. Except we never got to section 43, figuring we'd go for the closer and drier view from behind section 25. (It didn't rain until the tenth, anyway.) If you don't mind standing the whole game, it's the place to be. Not a bad view for 23 bucks.

The tradition of no one else taking the field until Manny does is so out of control that he's basically all the way to his position before the rest of the team is dressed. Above, he takes the field. Note how no one in the dugout has even thought about moving yet. 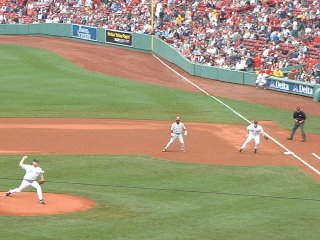 Schill on the hill in the first. 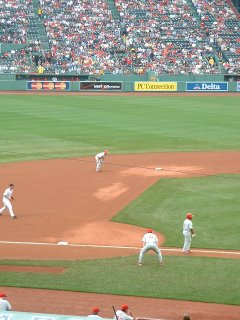 The first two Phils of the game reached. This pic shows the empties in the bleachers, which quickly filled up on this supposed-to-have-been-rainy day. 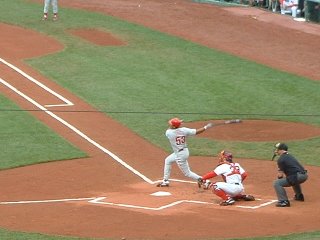 Curt threw two bad 0-2's, both of which were sent solidly into center, including this double to Bobby "Don't Call Me A-Brew" Abreu, aka Abreu the Boy Warrior On A Quest To Save The Empress. But he remembered Jere's advice to waste pitches after that and had a great game. In fact, if it weren't for a bunt and a bloop hit before this doobler, he might not have given up a run all day. 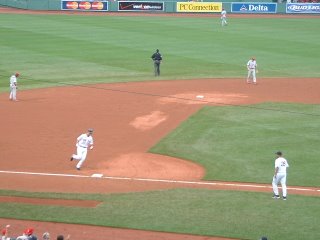 Lowell rounds third on his homer. 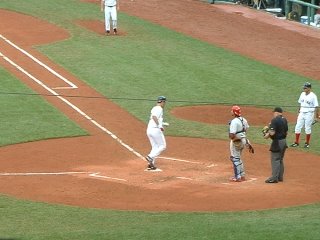 And touches the plate as CO2 looks on. 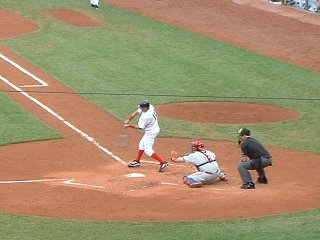 Carbon Dioxide at the plate. 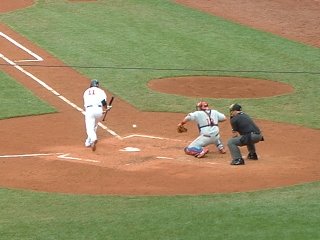 A bunt attempt by the best fielding shortstop we've ever seen who can hit .200 and it wouldn't matter and when everyone else was trying to make a controversy out of it asking "How long should we stick with him?" Jere was saying "Don't worry about this guy" and now he's hitting awesome as a bonus but even if he was still at .200 I'd be saying we should keep starting this totally rad, comfortable-in-the-field, non-Edgar-y ballplayer. 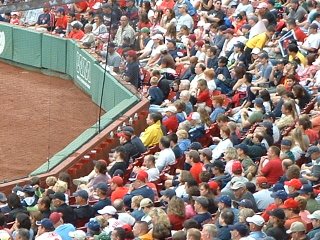 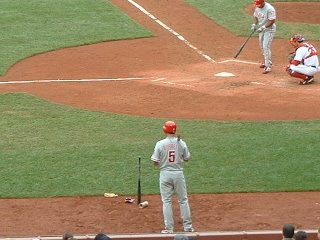 We're close enough to the equinox so that Pat Burrell could stand a bat on end. 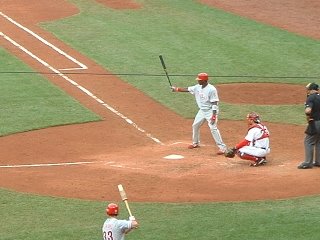 Ryan Howard does that Ichiro-ish thing. By the way, I suggest putting in a vote or two for Ichiro to keep him ahead of Damon for that third outfield spot, since Trot and Coco are out of the running at this point. Also note that Ichiro obviously gets screwed in this All-Star voting since it says "I. Suzuki" on the ballot. 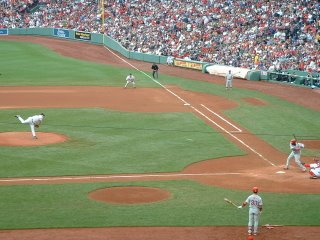 You may have heard that Brett Myers was arrested the morning before the game after punching his wife in the face and dragging her around by her hair. The Phillies decided, Yank-ily, that winning is important enough so that showing little kids that even if daddy kicks the crap out of mommy, he still can be a superstar on national TV the next day is a risk you have to take. So they threw him out there, and we booed his butt soundly every time he walked onto or off of the field. Mainly boos, with some screamed taunts every now and then. A funny one was when he walked Ortiz intentionally in the second, and some dude said something like "Sure, you'll hit your wife but you're afraid of Ortiz." Before that inning, Myers took a long time to come out of the dugout. I thought he might have said "screw this" at that point, but he eventually came out. At one point there was a hard line drive up the middle. I turned to Pat and said, "If he gets hit with a line drive there'll be a standing O. Sweet justice." I wasn't rooting for it, but I can't say I wouldn't have applauded him laying on the ground holding his face. Maybe the trainer could have dragged him off the field by his hair. Also note, Empy had the same idea! 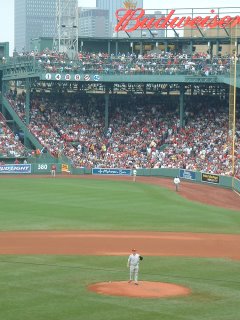 Above is Palooka himself on the hill. You'll see above him the Sheraton where the incident happened, looking down at him like a dissapointed parent the whole game. You should be clicking these to enlarge...you'll see the Sheraton "S" to the left of the Budweiser sign. "S" for saddened. Saddened, Brett, saddened. Check out the small brain on Brett. Anyway, I'd hoped the Sox would've not played music while Myers warmed up, so we could boo the whole time. They didn't do that, but they got their shot in. Before one inning, as he threw his warm-up pitches, the Fenway PA system blared Johnny Cash's "Folsom Prison Blues." (I have a video of him getting booed, but I didn't realize my dad's digital camera doesn't pick up sound when it records video. So it's kind of pointless to upload that. I gotta get my own digital camera.) 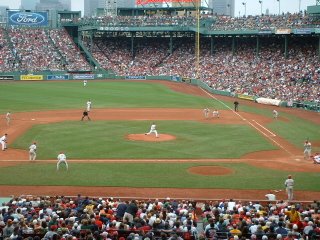 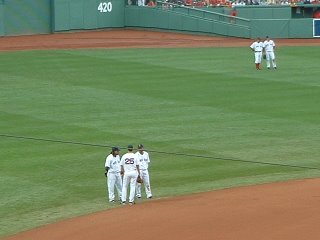 Waiting during a pitching change. 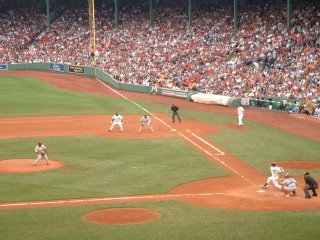 Trot grounding into a DP. Speaking of those, how sweet was it when Lopez got that double play to end the seventh after the Phils had tied it? That was rhetorical, you can stop talking to your screen now. 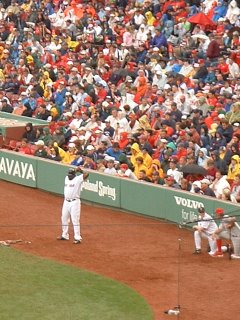 And how mega-sweet was it when the Phils, knowing Ortiz would bat in the tenth, opted to go with Tom Gordon? I kept saying to Cora, "No double or triple," because I didn't want Papi to get walked. Here's that pic of him on deck. I totally started thinking Natural at this point, since the rain finally started to fall. Not the final scene where he hits in into the lights, the scene where the lightning hits the ball. 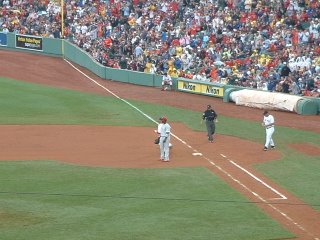 Cora came through with a single. I chose the exact moment where he disappeared behind the first baseman to snap. By the way, you should see some of the shots I don't post. (Like my blurry Papelbon shots--Pap is down to under a quarter run per nine innings. Incredible.) Then Papi came up and boom... 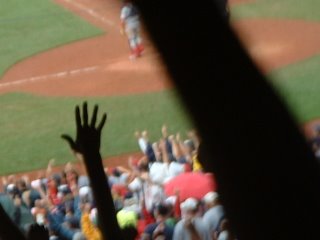 Everyone doing the international symbol for "Papi did it again." While jumping around like a fool, I raised the camera above my head and snapped away randomly. 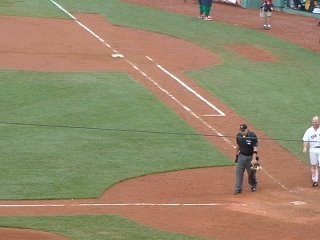 Only at ARSFIPT can you see the space between Ortiz coming home and the team waiting for him! 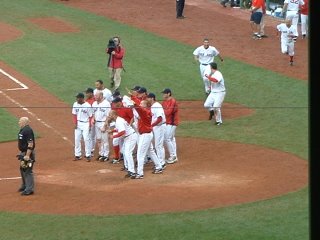 As least I did get a shot of everyone waiting. At this point I decided to shoot rather than wait and risk missing him jumping into the pile. I like Trot and Lowell going nuts off to the right. 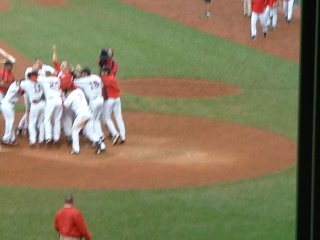 Papi's in there somewhere. And less blurry in person! 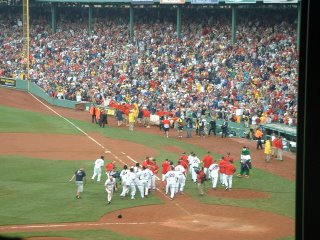 Did you ever wonder what poor sap has to go out and get Ortiz' helmet that he tosses away? It's Youk. 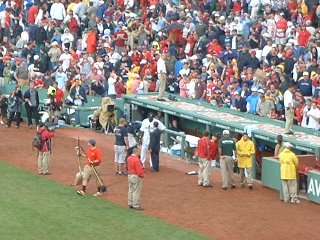 Papi came back out for the quick interview. At this point I'm standing on one of the folding chairs they have in the handicapped seating area for people who have trouble standing or whatever. 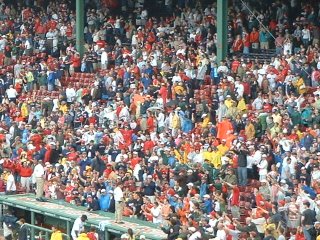 Good night and thanks, Papi. We'll raise a Cherry Coke at a rest stop on the Pike to you.

Speaking of that, I used to love getting a Burrito Grande at Fresh City at those rest stops. The ones Pat & I got yesterday, however...let's just say, half the size, same price. TJ, FC. It's like how Fenway has gone to little baby pretzels instead of the big, ballpark style. And did the price drop? Eh, NO, Peg.

After the game I took my borrowed car to the old tiptoeing grounds of Danbury, CT, and played RBI Baseball with Brian. We did a World Series which he won, 4 games to 2, with him being the Giants and me being the Angels. Those are are usual teams. California lost the first two in San Fran, before tying the series up. But the Giants took game five and then went back home and took care of business in game six.

The shot of Papi stretching before his at-bat... shivery. 'Specially when you know what he's gonna do with it.

Jere, you suck. And you're lucky. But most of all, I hate you. With love, of course. And my verification word is "mfkpoh" or "mother fuckin pooh." Where was that word when it was really apropos?

//Did you ever wonder what poor sap has to go out and get Ortiz' helmet that he tosses away? It's Youk.//

Nice to know you had a great time. You sure know how to pick 'em!!