Pictures And Words And Stuff

Saturday, June 10th, 2 AC.* We got to the park around noon, wondering why the rain that was supposed to stop hadn't stopped. "Any minute," we thought. 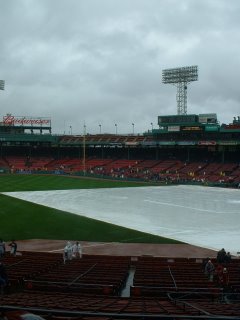 Were we right? Eh, NO, Peg. Our seats were down in the field boxes, third base side. See that aisle in the above photo? On that aisle, nine rows from the field. Once a year I buy the best seats possible. I was kind of pissed that it turned out to be for a game in which we could've gone and sat there anyway, because of all the no-shows. (click all these to embiggen) 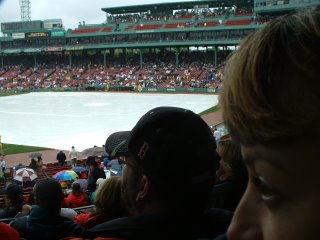 For an hour or so, we just chilled out under the overhang, waiting. The scoreboard said they would reassess the rain situation at 1:30. Other than that, we never got any updates. 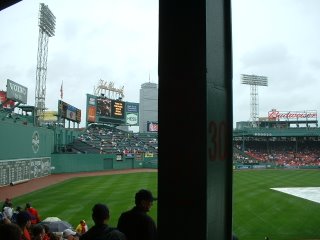 I was effing around with pole/Pru picture ideas. I didn't get a triple double. I got this. Another idea would be to have the Pru hiding behind the pole, much like how Wes Anderson filmed a scene in Royal Tenenbaums with the Statue of Liberty in the background, only to have a character block it out on purpose. (Gene Hackman was in that scene, meaning I've mentioned him in two consecutive posts.) 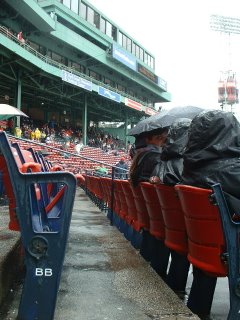 I took this same shot on June 9th, 2004, on the day of Nomar's return from injury, in the pre-digital camera days. I've always wanted to re-take it, complete with rain and umbrellas. I had no idea one of the people glanced over at me--my head, actually, peeking out of the tunnel--until I saw the photo later. I think I like the old shot better. More cups and puddles on the ground. This one's cool, too, though.

Then we finally went underneath and watched the yanks-A's game on a huge TV. (It was also playing on the scoreboard in center.) We watched the last few exciting innings, including Jeter making the final out. Everyone went nuts. Then we made a call saying we wouldn't be able to make the 6:00 party we'd planned on attending, since it was five and the tarp was still on. My prediction turned out to be true: They'd call off game two and keep us here until they were ready to play. 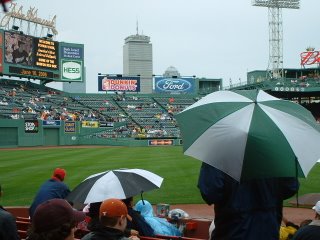 We finally went down to the seats, a little before the tarp finally came off. 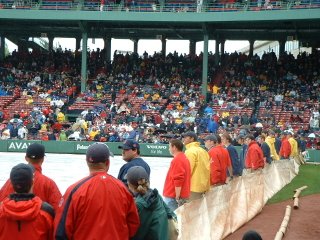 I love this shot of the grounds crew, waiting for the call to charge. 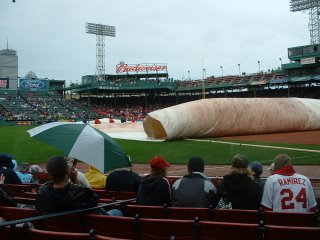 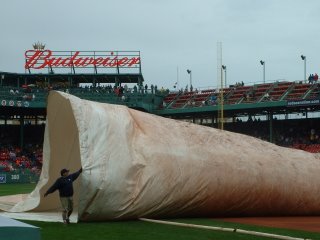 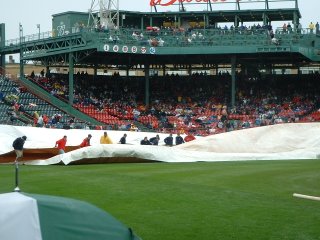 You can tell by the fact that I was ready to take these shots that I was actually excited for tarp-takin'-off action. And not just because it signaled the end of the longest rain delay in Fenway Park's history. 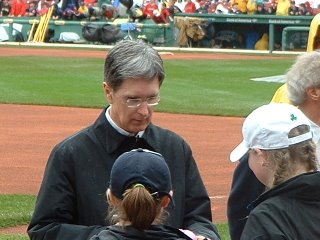 Jack Hank had some business to attend to in the left field corner, and signed autographs (or exorcising demons?) on his way back. 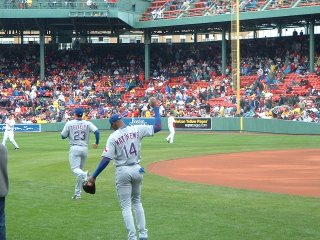 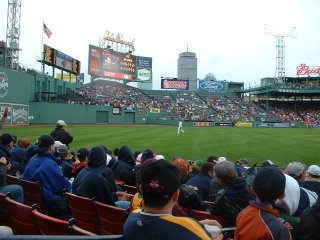 Manny takes the field, as the game is about to start after we'd been at the park for six hours. 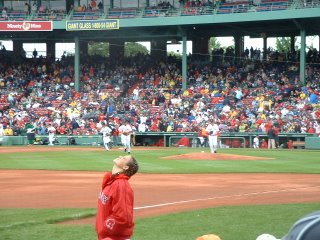 As Lester took the hill, Kelly balanced a little tiny Mike Lowell on her forehead. 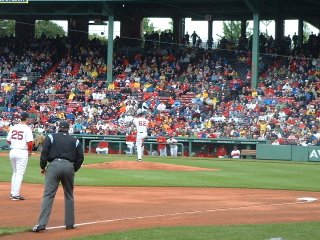 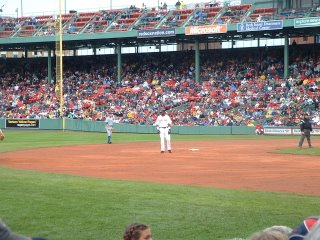 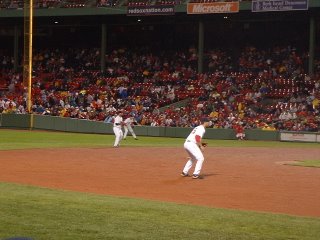 A really cool view of three Red Sox infielders in the shift. 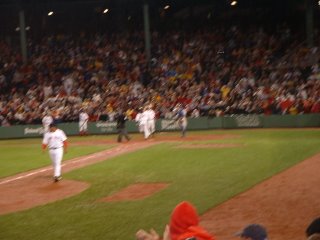 A terribly blurry shot of Manny's homer in the eighth. We thought we were gonna win at that point, but then we were stabbed by Foulke.

It would be the next day's crowd that got the walkoff win. That was the longest I'd ever spent at Fenway. Nine plus hours. For having to wait all that time without ever being told what was going on, we each got a free hot dog. Which is like salt in the wound when you're a vegetarian. Couldn't they have added "...or a food item of equal value." Terrible job. It was quite funny to watch the mad dash for the exits after the hot dog announcement. I probably wouldn't have made it to the concession stand in time even if I did dig on swine.

About baseball stuff: Lester did a nice job. Got such an ovation for getting the first guy out. With today's internet society, we all hear about these prospects from the time they're conceived, so all the anticipation can lead to love-fests. Whereas yankee fans are all "who the hell is this guy? Hey, what a great catch! And he's not a hired gun! Yeah, let's start him every day and assume everything will be fine! Start gathering footage for the yankeeography, to air after David Cone's!" Oh, wait, I can't use that as a joke anymore, as there actually IS a Cone hour-long yankeeography now.

I call mark Loretta "The Mick" now. I'm convinced someone slipped him a mickey when he got to New York. He became a different player, striking out his first two times, totally uncharacteristically, and rarely got hits. The mickey has been slowly wearing off, but look at that missed ball at the game I was at, and the behind-the-back toss. He's still a little woozy, me proverbially thinks. Hopefully the Minnesota air will fully cure him.

Pauley will be fine eventually. In fact, after the hit-barrage, he ate up some innings and settled down somewhat.

Coco does that finger-waggle with his left hand, whether batting righty or lefty.

Nixon's doing great as usual in the year we traded one of our best pitchers for a guy to platoon with him.

Seanez is apparently still with the club. Can't we just pick any other guy, maybe out of a hat, to replace him. Maybe I'm not being fair, but I just don't trust the guy, and I don't trust Tavarez, either. It's kind of like how people tell me about all these wins David Wells had last year, but I just can't seem to remember any.

I'm gonna go out on a limb with Clement and say he'll finish the year strong.

And how sweet was it, Friday night, when Papelbon blew the save, but then did exactly what he always does in the ninth to get the win? On the same night when Randy was getting his ass booed at home, loudly and consistently. The ump was giving him nothing, he was complaining and pissed, and the more pissed he got, the fewer calls he got, and the more boos he got. Beautiful. Same with A-Rod this weekend. Boo-Fest '85. Just heartwarming. Really good weekend, is what I'm trying to say. Most fun I've ever had sitting through nine hours of rain and a loss.

Comments:
I agree with your opinion of Julia and Rudy. What a mess they conjure up. And Trot is Trot. If he's feeling good, we can count on great defense and clutch offense.

I think Tavarez may yet be valuable. If Timlin is healthy, I could see Tavarez filling the Curt Leskanic-type role pretty well. It'd be a pretty major upgrade though if Hansen pitched well and the playoff bullpen looked like Delcarmen/Hansen/Timlin/Papelbon/Lester.

I felt bad for everyone on Saturday at the park - I listened to WEEI and most of it was people calling in bashing the Sox for not deciding on the weather sooner.

Trot is The Man, and let the debate end there. Also, as I've mentioned before, "Kerosene" Rudy Seanez and Julian "Nightmare on Lansdowne Street" Tavarez are NOT the answer. We're sort of stuck right now, unless some combination of Pauley, Lester, Hansen, trade deadline grab, or other wise decides to step up; but unfortunately, it all relies on Francoma recognizing that aforementioned awful set-up guys need the hook. And we all know how patient/stubborn Tito is to make personel changes. And furthermore, why am I plastering all this criminally astute analysis all over Jere's blog instead of mine? D'Oh!