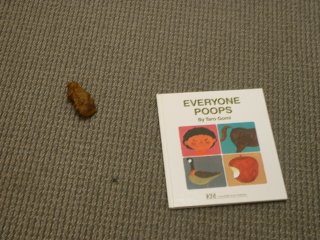 Not that kind! Two runs, sicko. Anyway, here's the offending turd from this morning. Jennie keeps that book at her desk, and decided it needed to be in the picture. I still don't know the whole story. The only thing I know is, I came in to work, and a man had taken a dump on the floor. Details to follow as they come in. Click any of these to enlarge. (At your own risk.) 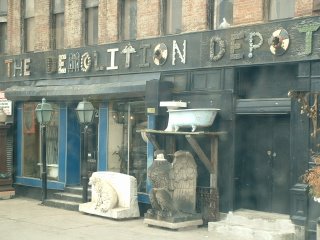 On the bus on the way to Shea, on 125th Street, it's...dun du daaah, "Demolition Depot"! Can't believe nobody's snatched up that giant headless eagle yet. 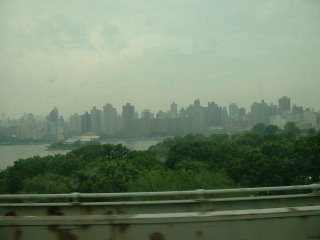 The part of Manhattan where I live, as seen from the Triboro Bridge, headed to Queens. See that building just right of center? The one that sticks up a little bit, kinda? That's the one that rises up from our back "yard," basically. 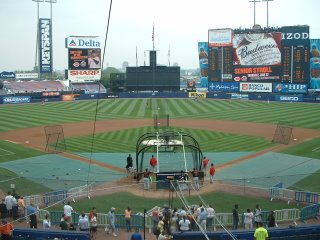 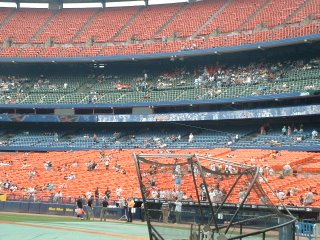 My seat was in the front row of the upper half of the green seats, in the middle of this picture. Much better than my last mezzanine experience, under the overhang behind the plate. And as I suspected, the beautiful weather made for a much more pleasant day. Plezz mezz. 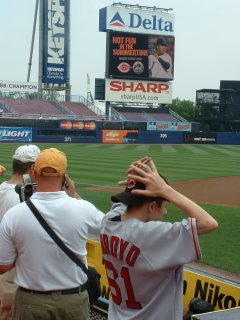 I asked this kid if he'd seen Bronson. Turns out I'd missed him. I didn't get there early as usual, since this was a work trip, and I had to wait for other people to board the bus. Old, slow people. I also took this shot to show Pedro and Arroyo. Still feels weird to hear Mets fans say "Come on, get him, Pedro!" That's our Pedro, not yours. 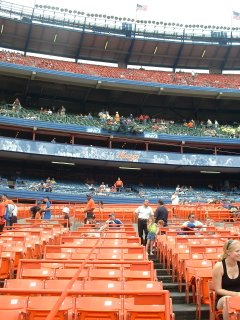 From above the third base dugout, but, like, if you turn around. 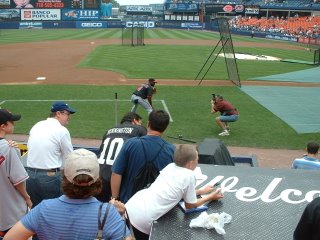 A majority of baseball card and sticker photos were taken in New York when I was little. Hell, the whole Mariners team was pictured in front of the old "BRUT" sign at Yankee Stadium one year. Apparently, this is still the case, as I've now seen players get card photos taken at two of my last three Mets games. 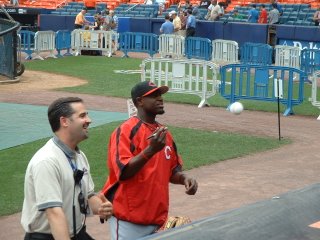 That same dude, tossing a ball to a fan. If anyone reading is a huge fan of this dude, you're welcome. 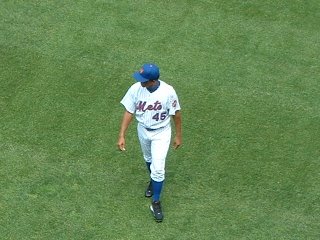 Went out to right to catch Pedro running pre-game. 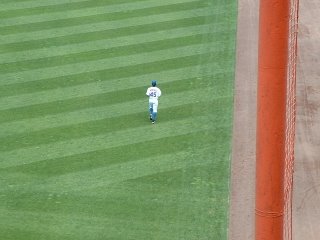 I love this one. 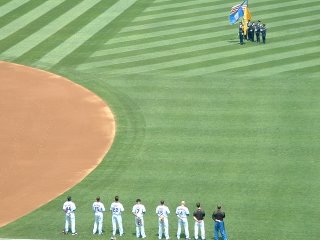 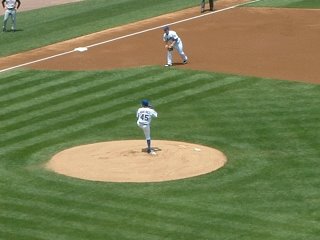 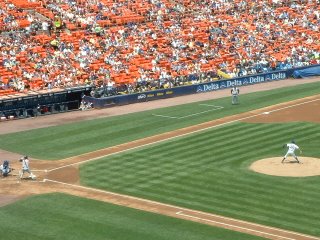 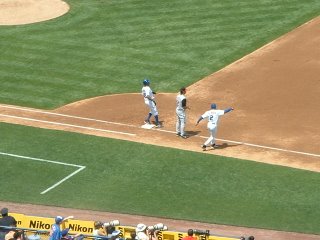 A helmeted Pedro hits first, but is robbed of a hit, to the dismay of the first base coach.

Pedro won, 6-2. He wasn't sharp much of the time, but got the job done. Some Met that the fans seem to think should win the MVP hit two homers. I saw Lastings play, too. I don't know, it's all NL crap to me. Different sport. Never saw Bronson. Literally. I couldn't even make him out in the dugout from my seat. 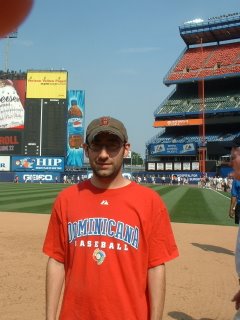 Then I went on the field. Here's me near the Buckner spot. For work, we took a bunch of old people to the game, which featured the "Senior Stroll" afterwards. Some of my senior buddies did a great job of pretending I was necessary in helping them walk. Turns out security didn't even really question anybody anyway. If you were on the line, and there was an old person somewhere in your vicinity, you were allowed to round the bases. 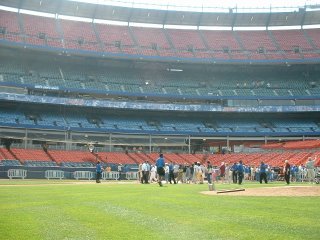 From between first and second, facing the plate. A view Tim Teufel often had. 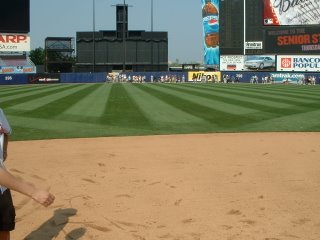 Here's center field, from second base. 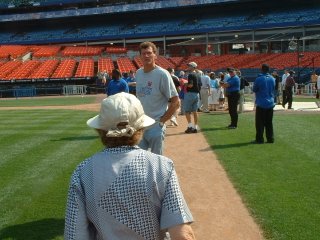 Had Rice taken a more dead-on path from third to home... (that's for you, Matty. But I honestly never got on Jim Ed for that one.) 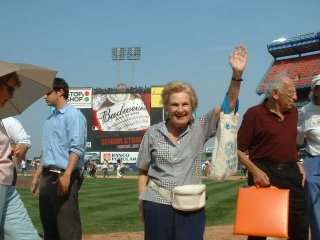 This is Esther. She sat next to me. Her whole family is made up of Mr. Dunbar fans, but she's a Mets fan. Here she is, quite psyched to be standing on home plate at Shea. 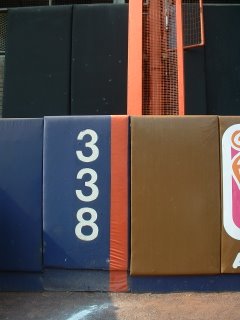 On the way out, I got this shot of the right field corner. Note the distinctive Dunkin Donuts-colored Dunkin Donuts ad on the wall. 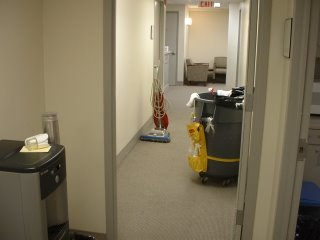 Just to show you that the poo was cleaned up, here's the poo area, cleared of the charges. 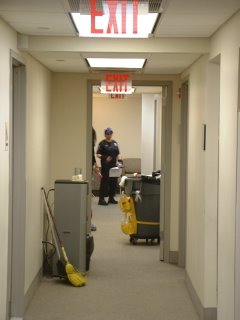 Another one, featuring that lady who I wrote about, who inexplicably loves the Mets AND Yanks. Note the heavy artillery brought out to destroy the poo: Garbage pail with cleaning products on holster, vaccuum, brooms.

Comments:
Jim Ed got thrown out twice at home in that series...like Lita Ford said, "Kiss me once, Kiss me twice, Kiss me deadly..."

While it's true that Everyone Poops, rarely does the poop land on the carpet.

I remember when Kara and I lived in our teeny studio apartment during our freshman year in college, a homeless person slept in the entrance way of our building. A mighty gust of serious foot odor would greet me there as I exited the building every morning before class. Ahhh, the old days.

That's David Wright, one of the ten best players in baseball.

I thought it was Dave Kingman.

Re: That lovely before breakfast first photo...."cut loose like a deuce" for real! Have a great weekend Jere

His Opposite is A-Rod;

The Buckner Spot @ 1st Base;

@ least you weren't under the Upper-Level Underhang;

Mets in Toronto; Red Sox @ Home with The Phloundering Phillies;

& The Damn Yankees may end up sleeping with The Fish, after The Marlins give them some extra Bad Memories.

On the SNY Replay, Pedro's Ball Dropped in but the RF is an actor.

And of that pic of you next to Billy Buck's spot, NICE SHIRT. It's big on you, too. We might be the near same size. Have fun.

Well my shirt might be a different size anyway. Who cares?

I was trying to be friendly, and funny. Crucify me.