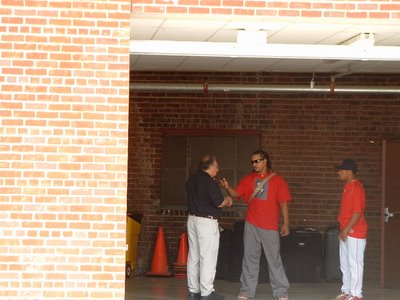 Only briefly hung around the players' entrance, but had a rare Manny sighting. 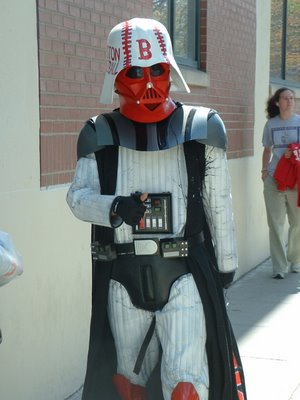 Don't know what this person's deal was. 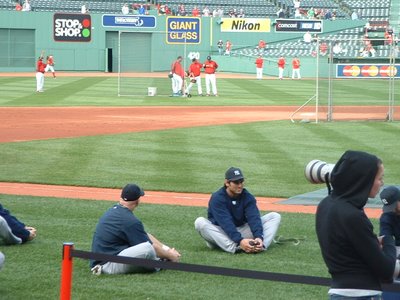 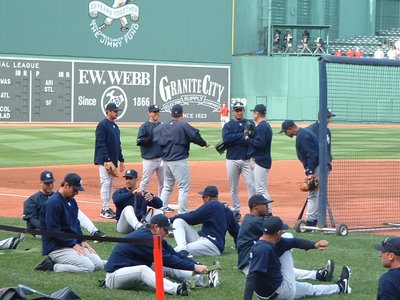 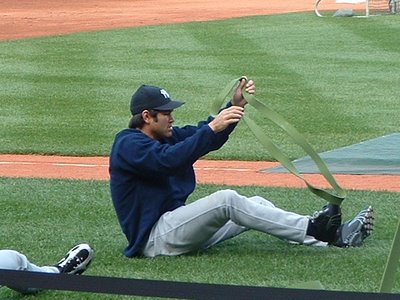 This belt is too big! 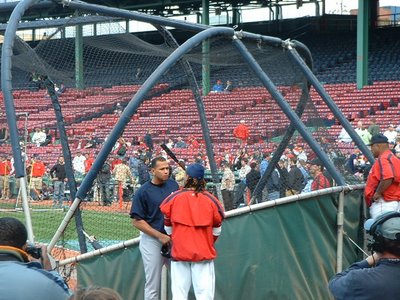 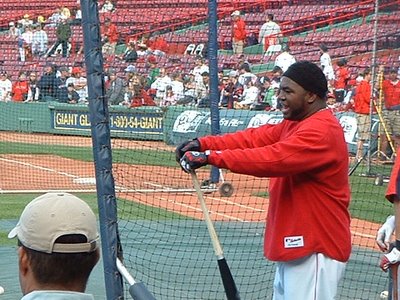 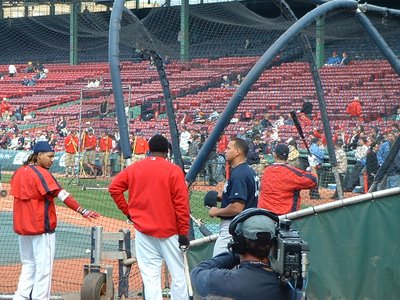 These captions are boring. 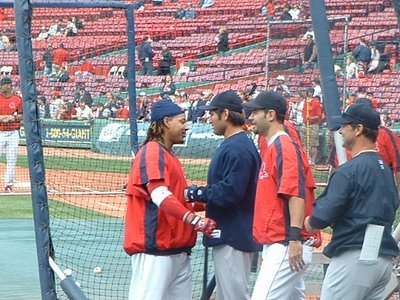 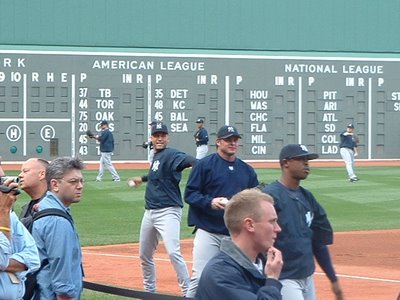 Jeter nails Giambi in the back of the head with a baseball, knocking him out cold. 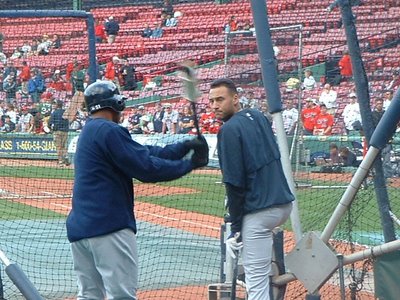 So Bernie wails away on him with his bat. 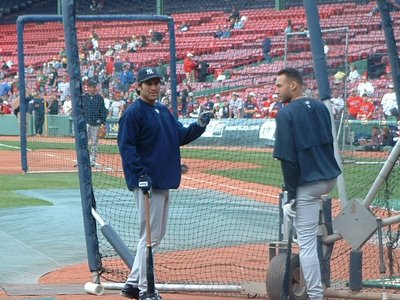 A couple o' teammates. Who make me puke. 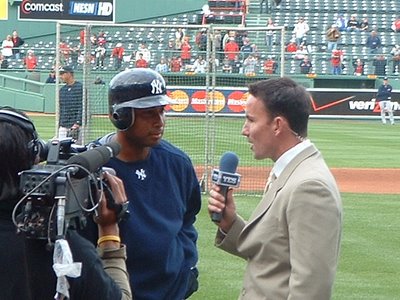 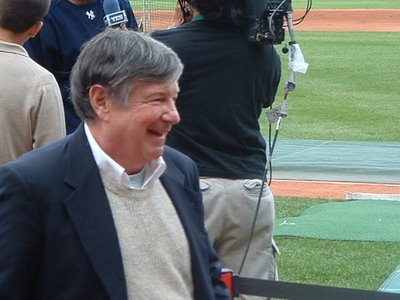 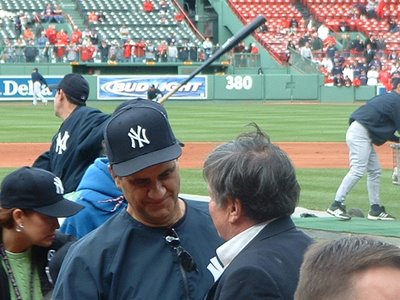 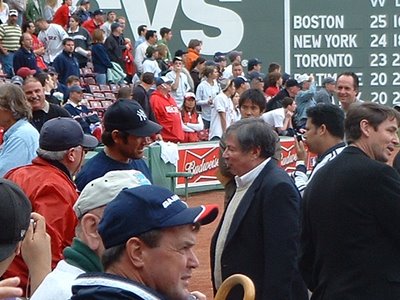 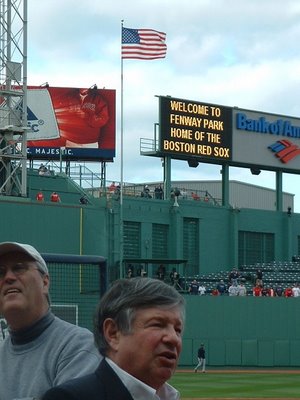 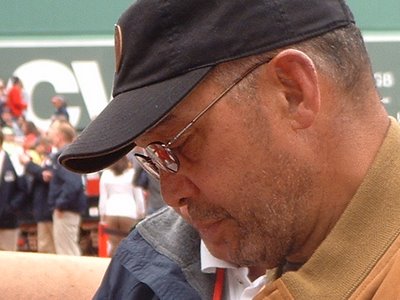 Ahhhhh! I must kill...the queen. 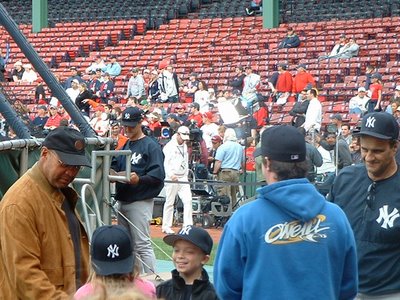 If you have a World Series ring, take one step forward. Not so fast, Mr. Mattingly. 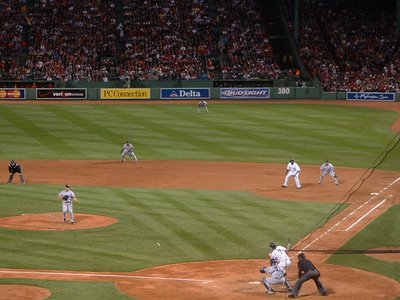 Trot hits the ball and these such things. 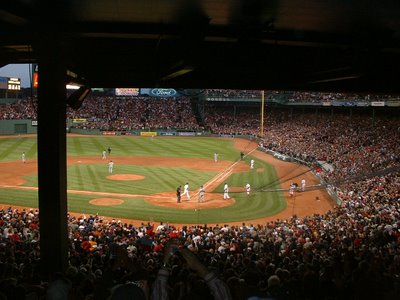 Manny crosses the plate on his homer.

About tonight's game: terrible job. Still in first, though, and Randy's still droppin' deuces on the hill. Great moment when the yankee announcers talked about "buzzing" Manny when Proctor came in, once he got ahead in the count, and Manny took him deep yet again on the first pitch. Lots and lots and lots of talk on Hell, No, about Manny watching that homer last night. (Literally no mention of how he just put his head down and ran on both homers tonight. Maybe because they were all too busy talking about their plans to hit Manny.) Bobby Murcer was *appalled*, even--he who played with both Reggie Jackson and Dave Winfield. He must have spent the entire 1981 season in an appalled state.

Comments:
Kay did actually say something along the lines of, "He didn't admire that one. He didn't have time!" (because it was out of the park in like 0.4 seconds) on the Proctor home run.

But still one of the most prejudiced, nasty, disgraceful broadcasts I have ever had the pleasure to mute for several minutes at a time.

Funny pic of Darth Bomber...he apparently walked by the WEEI studio during the Big Show, causing rampant on-air speculation regarding the combination of pharmaceuticals involved in actually wearing that costume in public.

I'm so glad I don't have to deal with the No network.

The weird thing is, he was a Sox fan. He's got the B, and a World Series Champs towel/cape on his back. But on the back of the helmet it said "Boston Red Sox vs. New York Yankees."

I would like to state my jealousy for all the games you get to go to. Don't you have to work every once in a while to pay for all the tickets? I'm jealous. Good for you. Keep up the good work.

Also- what's with all the Kapstein pics?

Whenever I see him I just think of that ridiculous play he made for the GM spot, and how it was (as mentioned by Gammons at least a few times) kind of an industry-wide joke. Very interesting.

You were thisclose! From your TV set to right in your kitchen!

Re: the tickets. Having the 10-Game Plan helps. The other games I get come from being ready for those 9 AM onsale times. And being an RSN member.

Note: Since the 10-Game Plan loads up on April and September games, and since I got my first few games when they only released April and May games, I'm pretty early-season-heavy this year. But who knows, maybe I'll snatch up some more mid-season games as the season goes on.

BSM--have you forgot about my Kapstein/Drinkwater obsession? Reb took shots of me w/Kap in the background. I can't wait to see those.

Re: Gammons. I heard that at the time, too. My explanation: Gammo was just jealous they didn't consider HIM for GM!

That's right! I totally forgot about that. OK, that makes sense.