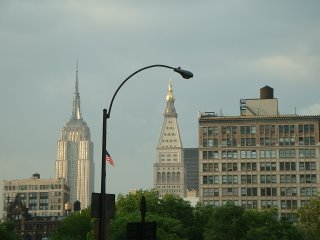 Wiffle ball was out due to the rain, so Chan and I headed down to the Union Square area for some burritos. By the time I got down there, the rain was done, leading to some awesome cloud/sky/sunset action. Here's the sun hitting the Empire State Building. Usually it's kind of bland. It's cool to see it actually glowing. Click to enlarge. 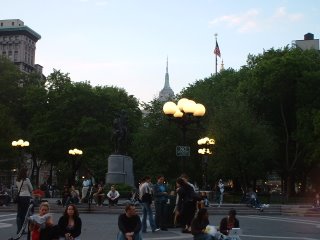 Here's another shot of the ESB starting to light up green in the background of Union Square. A disturbing incident occurred here. A (psycho) dude was staring at me as I walked by him, from about twenty feet away. Out of nowhere, he shouts "Fuck you, Jew!" I was kind of shocked, and not just because I'm not Jewish anyway. Then he says "don't fuck with me." Uh...okay, how is walking through a park "fucking with the crazy guy"? Anyway, for a guy giving the "tough guy" routine, he sure was walking away pretty fast. He finally yelled some other gibberish about Pfizer wanting to use me to something something. Then he disappeared into the crowd. I can't even imagine the childhood that guy must have had. Either way, TERRIBLE job by him. I hope a Jewish dude knocks his teeth out. 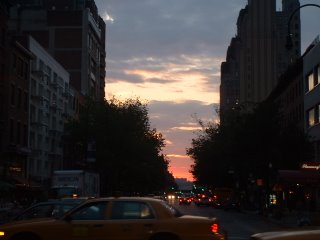 We're a few days away from "Manhattanhenge," one of the two days each year when the sun lines up with the cross streets, resulting in shadows taller than souls. Got a hint of it tonight, but mainly got a sweet yellow to orange to purple to pink to red sunset. We decided to walk toward the Hudson to get some shots. This is looking down 14th Street. 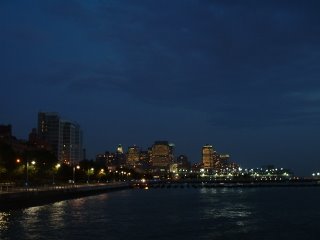 Looking south along the Hudson at lower Manhattan. 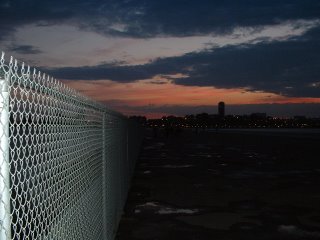 A pier. Out on the pier, a marching band was practicing. It's tough to see them. Maybe shine a flashlight at your screen or something. Background: Jersey. Tomorrow I'll put the "Jere S" in New Jersey as I drive through it on the way to Philly for Sox-Phils. Below: two more shots of the same thing, pulling back more each time. The crazy sky is the key here. And the marching band, if you could see them. (Not pictured is the rugby field we came across, where the dude from Sox Fan in Hell played once. He showed a pic of it here. I could have looked for him among the practicing rugbiers (rugbians?), but I don't know what he looks like. They were practicing a play where one dude inbounds the ball to another guy who is lifted up by two other guys. He catches it way up in the air, tosses it down to a dude at ground level who then fires to yet another guy cutting across. They had it mastered, but I wonder how hard it becomes when the other team is involved, and is trying to kick the crap out of you. It's like when me and Pat mastered the "flea-flicker" with a Nerf football...but there were no defenders. And also not pictured is the trapeze school, also along the Hudson. The women there were also practicing after dark,--there's a lighted indoor tent--flipping around all crazy, too crazy for my camera to catch in non-blurred form.) 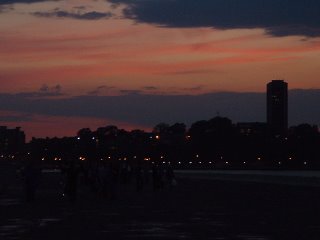 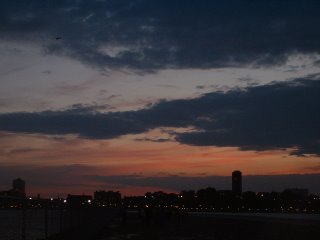 Comments:
A Rugby Player is called a "Rugger" & their songs of celebration are quite-humorous.

A Soccer player is called a "Footballer."

& Alex(Is)Rodriguez is a 5 Tool Tool.