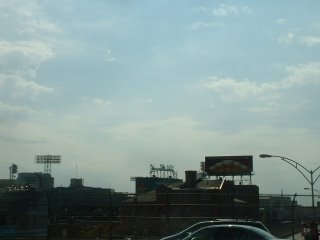 Parked for $2 at the not-so-secret spot. Here's the ballpark from a Pike overpass. Click these to enlarge. They're better that way. 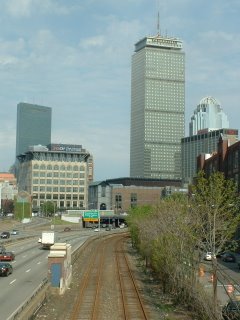 Here's what the Pru would look like from the top of a really tall train. 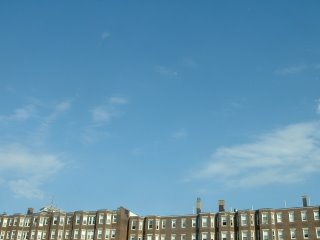 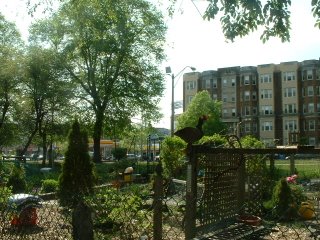 I like taking shots of places from weird angles and locations. Do you see Fenway Park? 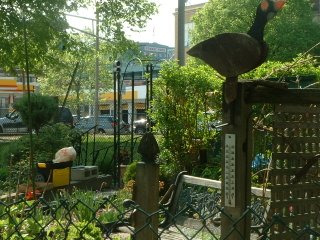 What about now, chief? 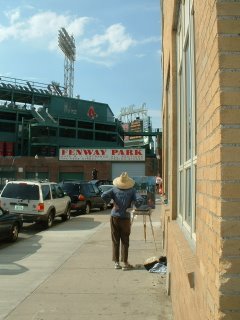 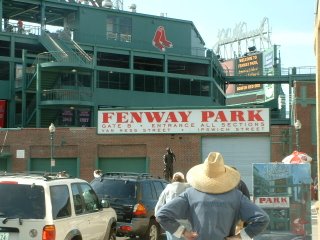 A better shot of her work. In her version, the gates are open, which proves she's been working on this for a while. 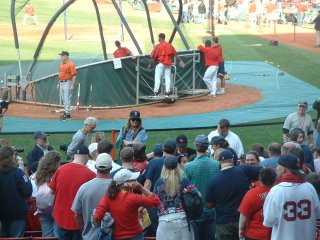 The crowd gathers around Kevin Millar. 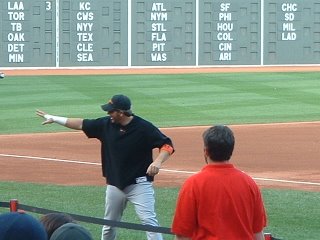 Millar does something with one of his limbs. 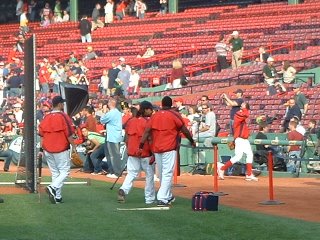 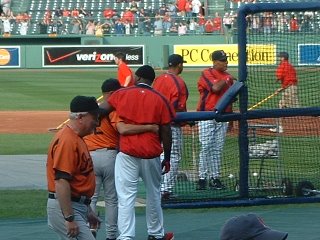 Ortiz with his arm around an Oriole. 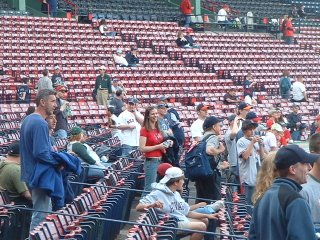 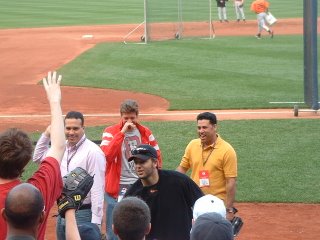 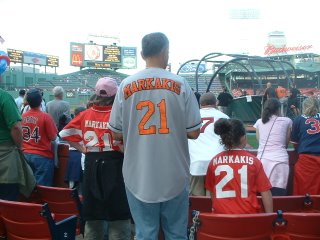 Members of the Markakis family. The O's outfielder grew up a Sox fan on Long Island. 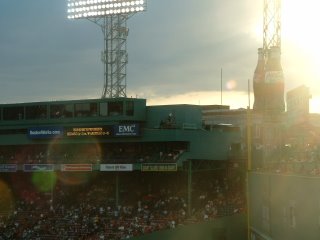 The sun over the Monster. We're now in our upper bleacher seats, section 38 WSBK. 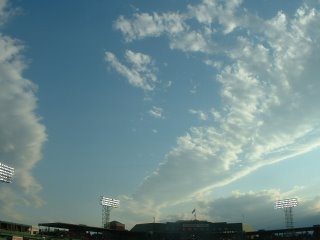 The sky above Fenway, pre-game. 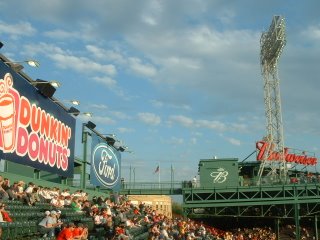 Another shot you'd never see unless you went to Fenway. The yellowish-brick building in the background is the same one on the right edge of the painter photo. 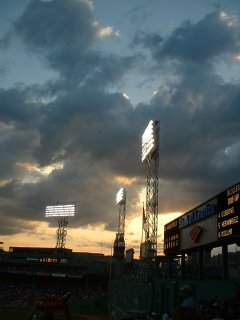 The sun setting over Fenway. 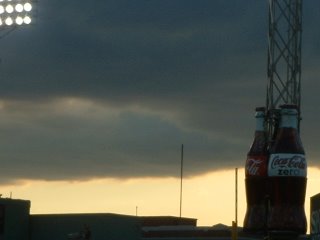 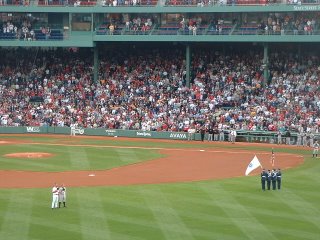 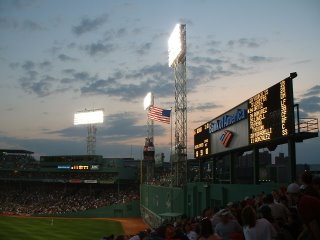 Check out that flag whipping in the wind. Before this wind, it was a lovely evening. Afterwards, it was winter. 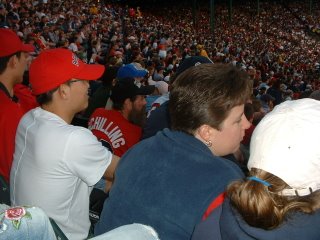 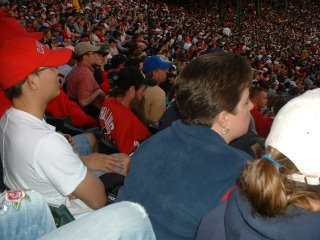 Here he's nodded off. For a while, he stayed awake. He even lit up a smoke. 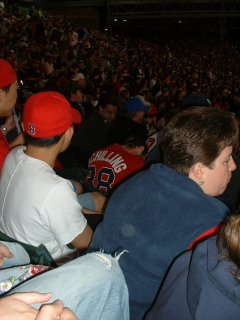 But by the fifth, he was completely passed out. 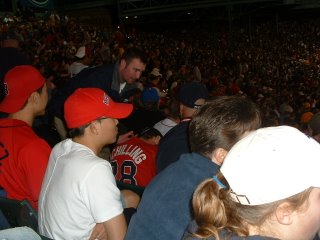 Here, a security guard tries to wake him up. After ten seconds of trying, he awakens, only to be given the boot. 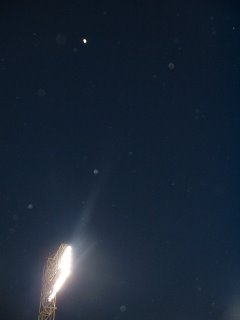 It's weird to have the light from the tower aiming away from you while in the park. See the daytime shot of this. Also, one of those white dots toward the top is the moon. 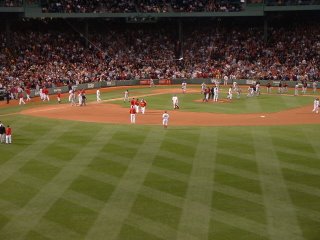 Here's everyone on the field after Tavarez hit a dude with a pitch. 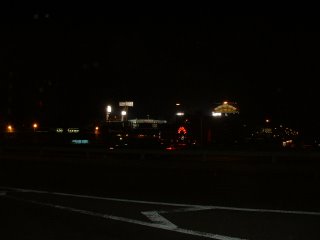 After the game, from same spot as first pic.

Comments:
Nice pics! Iain and I were at that game too. It was a great sky that night.

You are such a dick, Jere. In your last post you were throwing stones at Giambi and Sheffield, but you seem to not understand what goes on in your house. Ron Shandler does a great job in Baseball Forecaster correlating spikes in weight gain (of more than twenty pounds) and homerun spikes per at-bat. That doesn't prove if a player was using PEDs (Performance Enhancing Drugs) but it does make you question the stats and the player. Anyhow, your very own Jason Varitek makes that list at various points in his career - where his homerun spikes per at-bat also coincided within the same time frame where he gained 20 lbs or more. I don't see you going off on him. Or how about Nomar in 2000 and 2001 (weight gain spike of 20+ lbs of muscle just aren’t normal)? Or how about D-Lowe? In Tom Verducchi's SI mail bag the other day he was questioning V-Tek's and Nixon's weight loss and their drop in power numbers, were they too using PEDs? Who knows? D-Lowe in 2002, the year he won 20 games, apparently gained 25 lbs of muscle in a span of 60 days. You do realize that's impossible, right? Get your facts straight before you go off on Giambi and Sheff – though I do realize you just like to ramble without ever understanding how your side might be living or even questioning how they might be living. BTW, Mike Lowell also made Shandler’s list.

But yet you like to throw stones.....don't be a little fucken CUNT your whole life. Yes, I'm off my MEDS because you are a cunt face little bitch.

"Fucken" Anonymous went off his/her MEDS because of you, Jere. What a high compliment.

Hey Nony (that's short for anonymous, by the way), your Sheffield and Giambi are known for their steroid abuse. Giambi has admitted it, using honesty and courage. But he DID cheat. Sheffield, who all of us Boston fans just gush with love for, will NEVER admit he did the dirty deed, and that makes him even more despicable( Evil, heinous, an ass-fucking-hole). So as we go into these early season 3 games, enjoy the day while you can. For tonight, things change. Be prepared, and I wish you would stop by MY blog if you ever have time. It's another Sox blog, not as popular as Jere's, but people stop there just the same. Good people. Your different viewpoint might bring others, although commenting here, you've reached the pinnacle (the very top of Sox-ness.) I'm linked here under Sox blogs, or just click on my name. And yes, you can remain nameless, like the spineless coward that you are. Nice to talk wiith you. I guess you like bashing people. Wanna see bashing?? Wait until RJ takes the hill. And think of me when the base hits start coming. And coming. And coming....ad infinitum (a whole shitload).

I picture this guy's 4-year old daughter coming home from school: "I made a painting for you, daddy!"

"You fucken cunt. Always making fun of my consulting firm, but what the fuck have you done you little cuntface??"

"Daddy, we learned the '-ing' rule today. 'Fuckin'' is an abbreviated form of the '-ing' version of the verb 'to fuck.' But you're--that means 'you are, dad, and is a completely different word than 'your'--saying 'fucken,' as if it were its own adjective, mildly related to 'fuckin',' but a non-existent word nonetheless."

"Shut you're mouth you fucken cunt. You'll always be a loser."

Yes, Nixon and Lowe are good bets to have done steroids, among other Sox players. Varitek, less so- more often than not his weight gain spike is correlating with a return to health, and thus more power. This season is a good example- he's had leg issues that have sapped his power.

Just to point that out. This isn't a Yankees problem by any stretch, but it's also not a good guy/ bad guy one either.

I'd also mention that equating speculative weight gain/ power spikes and confirmed court testimony of steroid use is a bit disingenuous, though the general point has some merit.

As you were enjoying your Fenway Sojourn, many Red Sox Fans from Boston, took the Amtrak to 34th St, then the 1 Train to Times Square, then their new "Green Line", the 7 Train to Shea Stadium, on Saturday afternoon & the game didn't star Pedro or Glavine. Car plates from Mass., were seen in the Shea Lot.

Their reason is that Tickets weren't available or that they were priced out of Fenway Park.

Upper Level was $16 for Mets- Braves;

Families from Boston, now come to Corona & the 7 Line sounds a bit like the Green Line to Kenmore Square.

Tim Mc Carver on 'roids? 30x more-annoying than ever.

I'm on front page of "Fenway Nation" with a piece on this "Boston To Shea" Phenomena.

Where exactly do Varitek's HR/AB spike? I just looked at the stats and I'm not seeing it.

I also don't understand the assertion about Mike Lowell - is he on steroids now, but wasn't in the second half of 2003 and all of 2004?

At least Giambi told the truth unlike Bonds and Sheffield. I'll give him that much. Probably not the whole truth, but he at least admitted to something.

Oh yeah, forgot to add that I ate five of my own fucken farts this morning watching YES, and then got really mad about your blog again. Sheff roolz!!

How can one eat one's own flatulence?

Sheff is OWT, you doofus.

More than likely a case of when Varitek puts weight on, his HR/ AB numbers improve. Less season-to-season and more week-to-week. I've not seen the report myself, though.

More than likely a case of when Varitek puts weight on, his HR/ AB numbers improve. Less season-to-season and more week-to-week. I've not seen the report myself, though.
>>>>>

I'm not buying it.