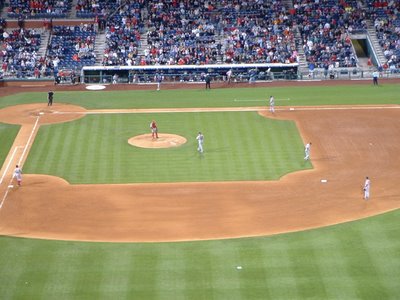 Papelbon comes in the ninth on Friday night. 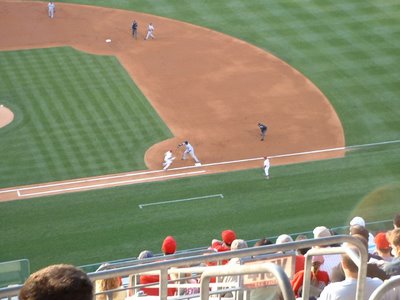 Two rarities on one night (Saturday). Above, Ortiz records the putout at first. Below, Josh Beckett crosses the plate on a homer, then gets surrounded by teammates in the dugout, after the initial silent treatment. (I got a pic of the silent treatment, but it's blurry and not nearly as exciting.) 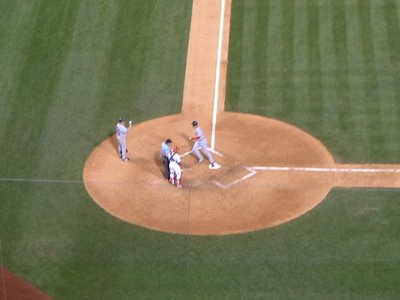 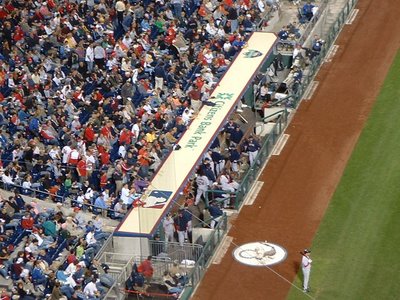 Will post more later. But, just have to say "terrible job" to the Mets. I was sitting their in the ninth inning on Saturday, saying, Okay, they've got two games, but they still have to beat them tomorrow. They can't let up likie usual. I have a feeling they'll find a way to lose game three, though. And before they even got that far, they ended up blowing the four-run lead in the ninth. (Kind of like my very, very easy prediction from Friday's entry, huh?) I imagine Willie talking to the team before the top of the ninth yesterday:

"Okay, guys. We are the only team capable of this. Of giving a tired, old, injured, depressed yankee squad new life. You guys are thinking tomorrow...I'm thinkin' RIGHT NOW. Gimme Wagner!"

At least the Sox are taking care of their own business. And at least the Mets still have a chance to win game three, so the yanks don't have any kind of momentum going into Fenway, where I'll be on Monday night(!)

It's "amazin," how these Mets-yanks series always go. The Mets look at the pinstripes, and turn to jelly. You could put uniforms on nine scarecrows (that's not such a stretch--Randy and Torre, I'm looking in your direction), and the Mets would still find a way to lose one of three. It just kills me, because the yanks get this added motivation of beating another rival, twice a year, whereas the Red Sox just get some random National League teams. I've always hated inter-league play. And they've done nothing to make me start liking it.

Comments:
In the (Billy)Wagnerian Opera, "Das Rheingold Extra Dry", it was like he had a few of those & lost his concentration:

Or was it Willie & Rick?

I was at Sunday Night's Game:

The Queens College-Educated Yankee Fans were there;

Much different group from "The Toilet-Trash";

A-Fraud got it worst of all, Ol' Mr Clutch;

Shea is becoming the alternate to a sold-out Fenway;

Actual Mets Fans are looking for Fenway Trips & not for the Mets Series, as most follow the Red Sox with Interest.

Billy Wagner was a LOT sharper than on Saturday & got the Save;

The Yawkey News is back!

Now that the Skanks are in town for three days, you can expect some venom on my blog. Or you might just hear me yelling at my TV from 250 miles away...

Welcome back, Eri-feline! Thanks for starting up again.