A Night At The T-Bowl 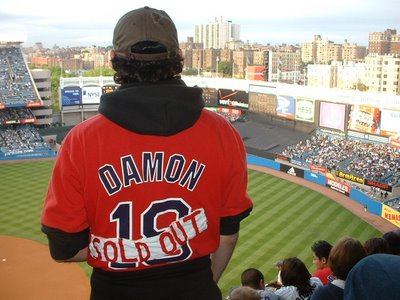 It was my idea, but Reb did the cutting, stitching, and took the photo of me. Almost decided on "souled out," but that would've blown yankee fans' minds.

Not the usual huge amount of Sox fans at the Stadium. That'll happen with an early season, mid-weeker. But still, lots of Dunbar fans were commenting that they thought they were in the wrong park, etc. So we still had a lot, just not like on a summer weekend. 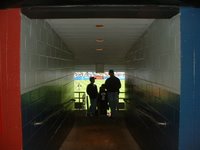 Looking down the one of the pipes leading to the basin. Click on any of these to enlarge. All photos copyright me as usual. Except for the Reb one. 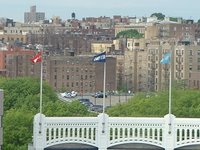 Love to see that red flag to the left of the blue one. 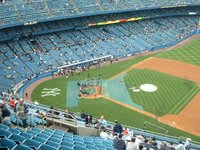 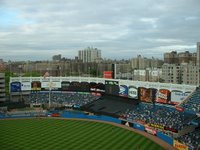 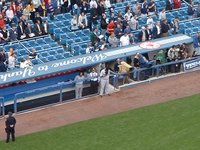 David and Manny during the national anthem. 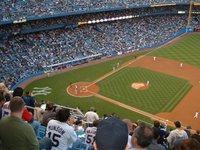 Papi heads for home on his dinger. 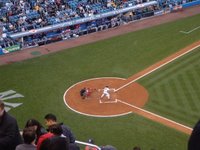 Empty-Head tries to Jeter one to the opposite field. You know that little scumbag actually had the nerve to double-point at the bleacher cretins during their role call? Dead to me, I tell ya. 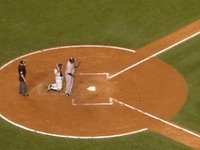 Papi coming up to bat. 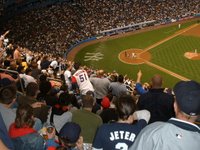 Here's the guy throwing the beer again. The story was: I don't know what he did to this lady, but she got pissed at him. Really pissed. She was standing up for herself, which was cool, while trying to get the attention of security. Getting no results that way, and with him saying who knows what to her, she tosses her beer at him. To which he overhands his brew at her, to the delight of the rest of the animals. Then, her friend, another woman, moved toward the guy, pissed. Another beer on him, another one back at her. 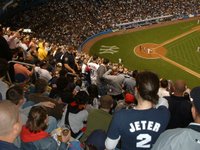 Now a cop finally reaches the area. People were tossed. 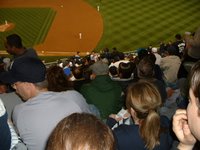 The guy in white (center of frame, facing camera and pointing) was doing the classic "I'm ready to fight" thing with the one Sox fan near him who kept standing up. Like Frank Costanza: "You want a piece of me??" It's ironic, because people who do this are really huge cowards. Think about it. As long as they know there are a lot of people around, and between the two of them, and that nothing can go too far because of the security all over the place, they can talk like a tough guy. Hey, at least the Sox fan had the guts to stand up to him with not many friendlies around. Although his buddy was a yankee fan. You can see him in the Damon shirt on the right, and to the right of him, a little red showing on the Sox fan. I liked how later, when the Sox fan had stuff thrown at him, the Damon guy stood up for him. 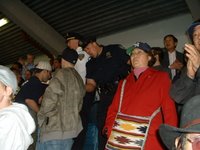 At one point, tempers really started to flare between the two guys mentioned above, and as everyone was screaming and cheering them on, this dude, a uniformed member of the Coward Corps, rains a beer down from six rows above. The cops finally figured out it was him. 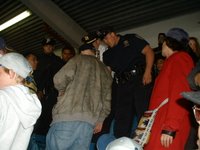 He pleads his case to no avail. 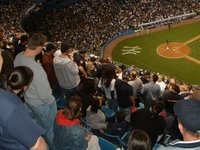 Then he decides the smart thing to do is try to wrestle out of the cop's hold repeatedly. This made the cop rough him up on the way out. Here a security guy joins the cop in escorting the guy back to his parents' house in Valhalla. Finally, they just stationed NYPD around our section. Nobody messed with me, though. Mainly because I know to just sit and smile. On a play, do your standing, cheering, and yelling, at the field, and then sit back down. Like you would anywhere else. I don't find fights in real life, so I know how to avoid them in yankee Stadium. If anyone did actually assault me, I think I'd just go to a cop. If he kicks me out for some reason, hey, at least I get a police escort out of that shithole. 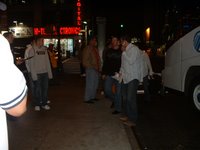 Loretta and Mirabelli, with Varitek hidden behind Doug. Reb and I got to the hotel at the moment the bus did. I was totally unprepared. I got to take two pictures. 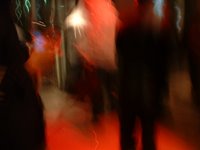 The only other shot I got at the hotel. You can't tell that the white blob is Varitek, but it still looks really cool, with the weird curvy lines and stuff.

"Wow, this upper deck is steep!"

"What was Ruth's number, one?"

"This guy [Melky Cabrera] used to play for Boston."

"Ohhhhh!" That was the reaction by the guy to the left of us literally every time the ball was hit. Fortunately he spent at least five innings on the beer line so we didn't have to hear it all night. Speaking of that, that may have been why there were so many empty seats the whole game. But I kind of think it was just because a lot of yankee fans were afraid to show up after the 14-3 loss. This post has gone on way too long. I'll just start ranting in a new post soon.

Comments:
'Souled Out' that would have been pretty funny. I like your description of the crazies. I went to a Sox game at the Stadium a few years back ('03, Clemens vs Wake, a Sox win) and as you said it was funny to see all the pissed off yankee fans, complaining about the ever present RSN members...

The "Keen Intellectualism" @ "The Asylum For The Criminally Idiotic", aka "The Toilet", is as Omnipresent & real as "The Tooth Fairy."

yankees "Fans" have no clue as to what goes on in their own ballpark.

Many had no clue that beer sales in the bleachers, ceased in May of 1998.

The game I was there for was a Sept game. Roger got yanked fairly early and I was amazed to hear the chants of "Roooogeer" at Yankee stadium. Surreal. (I was also quite shocked to learn about the no beer in the bleachers situation...)

Well my experience at Yankee Stadium for Monday's game (5/21/07) was fantastic-I GOT EJECTED!
I was wearing my red sox shirt and hat of course and the taunting and yelling stared immediately, just like every other time at Yankee Stadium..Well, when i was sitting enjoying the game in the upper decks a really large, toothless woman started to make comments along the lines of "you havnt't won in 86 years" etc.etc.etc...I had to correct her. I reminded her of the COMEBACK OF THE CENTURY and our recent World Championship. he was embarrased;( Sad i know... well her boyfriend was not amused by the lack of knowledge that his girl had so he felt the need to defend her. They both went BUCK WILD, I mean BUCK wild on myself and a few friends. She attempted to attack me by jumping down 3 rows but was too enormous for that to occur. She had to be held back and was breathing like a wild Wildabeast. She was a monster!! Well her boyfriend and her just kept going and my brother yelled "sit down fat boy" and more eruption...THE 80 year old mother threw her whole soda on me...!!!! IT was a joke. I just sat there at laughed and that made the beast more mad..she kept trying to come at me, still trying to jump over the rows (falling over her fat BTW)!! It was classic...well the cops came and we all were escorted and that was that...if only yankee "fans" knew the facts and didn't jump the bandwagon we would have peace...thanks

A Toilet is a place to go to the bathroom:

It is not a place to go to the ball game.