Hipster magician David Blaine is currently doing a stunt in which he'll stay submerged in water for, like, a long time. A week or something. He's doing this at New York's Lincoln Center, out in the plaza--or as most Americans know it, the place where Peter Venkman imitated that guy on roller skates by putting his arms out and spinning around after talking to Dana Barrett when she was with that other dude from the orchestra. I decided to meet up with Chan down there tonight to check it out. Click each pic to enlarge. 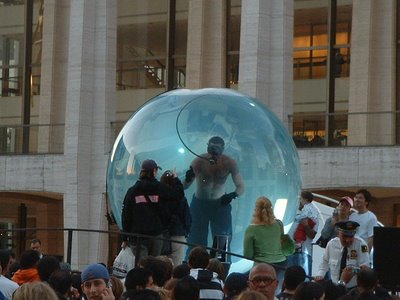 When I got there, it was still light out. (Note the blue, backwards Sox hat in the foreground. I totally didn't notice that until now.) 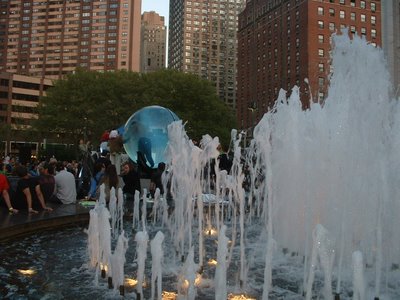 The bubble from the other side of the fountain. 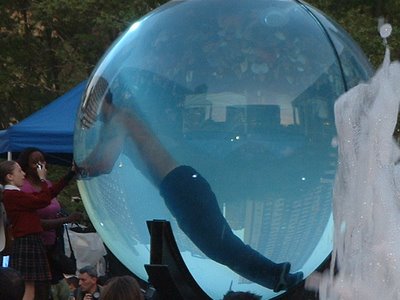 Basically, people were allowed to go right up to the glass, wait til Blaine turned toward them, take their pictures, and move along. This girl seemed psyched. For kids, this was like going to the human zoo. Note water from the fountain on the right. I also love looking at all the upside-down reflections in the bubble. Here, at the top of it, you see the crowd of people, all upside-downed out. 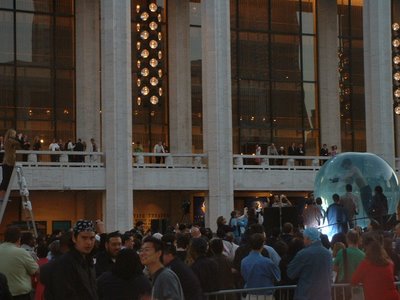 Left: a lady on a ladder. Right: the bubble. 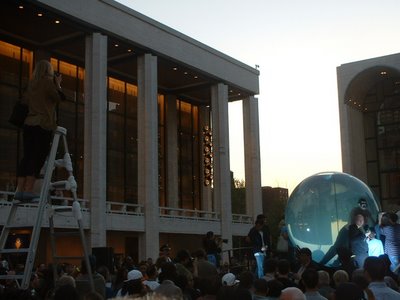 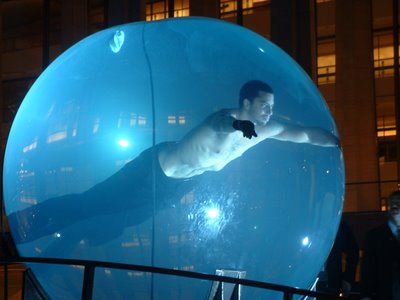 Occasionally he'd take his mask off and his breathing tube out. And do stuff like this. 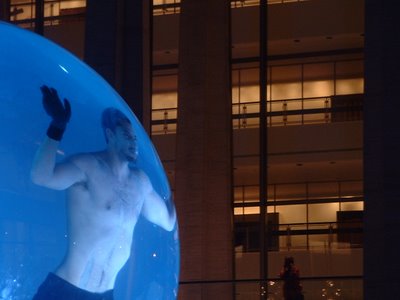 This shot is sweet. He'd get all distorted depending on your angle. 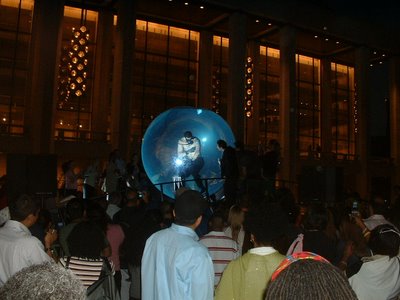 It's night now, adding to the coolness. A lot of people were saying, "This is stupid." Stupid or not, would you rather look at nothing, or a dude in a bubble of water?

Then we walked up the West, or Bizzaro, Side, ate Indian food, and due to Chan's usual lateness getting to Clement Center in the first place, I missed the whole Red Sox game. (Turned out to be a nice pressure-free win for me, just fining out the score afterward.) But we did see a dude eating alone in the Indian place who looked just like Varitek, and was wearing a white Red Sox hat. Then we walked across the park, where I took the usual shot of the midtown skyline: 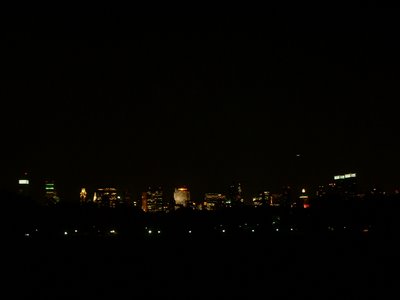 Then, on the other side of the park, we noticed a street was blocked off. It was all lit up, like a movie was being shot. A kid who looked like Bubba Crosby and wearing a Dunbar cap guarded the street. We asked him what the movie was. He said "The Nanny Diaries." He told us Laura Linney and Paul Giamatti were in it. Psyched for the latter, we went around the block to the other side of the street to get a closer view. Here's the very cool effect of seeing a street artificially lit up at night (I even get excited when they have those bright lights on the highway that they use for night-construction.): 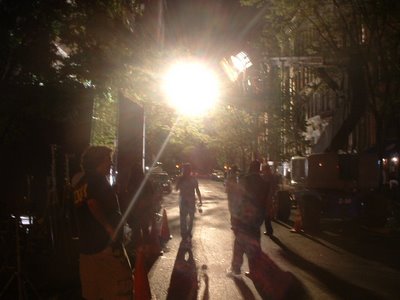 We watched a scene get filmed a few times. It featured no one we recognized. But then, who appears, but Scarlett Johansson. So now I was trying to get a picture of Scarlett. The crew-types said "no flash photography." So, between that and the fact that it was night, even with the artificial daylight, I only got one shot of her where you can even tell who it is. That's this one: 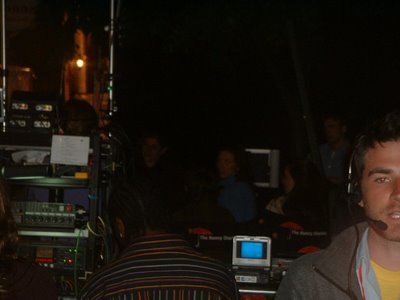 This made me laugh. Well played.

Side note from Mom:
You would fall in love with Laura Linney if you saw the 2000 movie, "You Can Count on Me," also starring Mark Ruffalo with a tour de force perfomance by Matthew Broderick whose character personifies, "Most men lead lives of quiet desperation." (Actual quote: from Henry David Thoreau's WALDEN POND--"The mass of men lead lives of quiet desperation and go to the grave with the song still in them." (And may I add that after seeing Laura Linney in "Mystic River" I thought she should go and play Lady MacBeth anywhere--even take a role in that now defunct New York repetoire company, "Shakespeare in the Parking Lot.")

Mom, I already have a girlfriend. Chan tried to tell me who Linney was, but I still can't figure it out. Also, I'm too lazy to go to imdb right now. How's that for quiet desperation? Or something.

Good call, Casey. What is it with Markus (aka Chan) and the lateness? There actually was one time recently where he beat me to somewhere we were meeting. But that was the one time, lifetime. Maybe a watch would solve his problem.

BS--thanks. I also wonder if a lot of the people there taking pics and stuff were hoping there'd be a problem and they'd get to see someone die.

Right, they're gonna shackle him and then he has to get out of it while holding his breath. And then he, uh, wins (?)

In trying to figure out how this might be a trick, Chan and I came up with the following possibilities:

1. It's not water, but some kind of vacuum, with a blue tint on the outside, and the bubbles that come out of his mouth are just what breath looks like in this special vacuum-land.

2. He's not in there at all. He's a hologram of some kind. We saw these tv screens in a tent nearby, so he's somewhere else, watching the screens, and turning toward people, so they think. But then the real him would have to be in another, separate bubble to get the floating effect. Possibly a bubble like the one described in possibility #1. So, then, I guess he wouldn't need the hologram. Ignore this possibiliy. It's probably just real.

After the Yankee/Red Sox game the other night I watched an interview with Big Papi on Boston Sports Tonight here in New York. It’s great we’re finally getting some love here in New York. It looks like we can watch every night on FSN New York at 10pm.

First off, Jere's Mom is 100% correct about Laura Linney (I've got a big crush on her) and 'You Can Count on Me' (very good movie). Excellent job, Jere's Mom!

So Jere, what block was this filmed on? I'll have to ask my fiance if she wants to wander over there this weekend.

As for David Blaine, I'm very surprised that Lincoln Center allowed him to set up there for a full week (or whatever it is).

I don't remember the exact street, but it's between 5th and Madison. Start in the high 80's and walk up the side of the park and you should see the Bubba Crosby kid guarding the street if they're still shooting. The Madison Ave. side is closer to where the action is, though. While trying to figure out how to spell Scarlett's last name, I came across a site that had pics from Thursday of her by the park. So, I'm guessing this movie has a lot of Central Park scenes. So, stick around there in general for more, or just keep an eye out for those signs on parking meters that tell you when movies are shooting.