I usually go overboard with pics, so I'll keep it short this time (for now). I got to Fenway before 10 AM. Thanks to Witch City for the ticket! And for taking this photo: 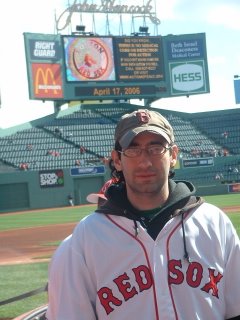 For the first time ever, I captured in a still photo a shot of the ball hitting the bat on a homer. This is Papi's homer to center: 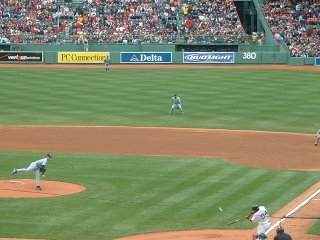 The Red Sox gave us a sweet ending to part one of my day, with a Loretta walk-off homer. I was in "leaving position," ready to bolt for Shea when the game ended, so this photo was taken with my arm up over the grandstand crowd: 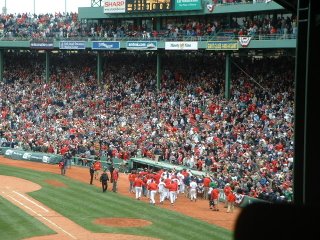 I quickly snapped a marathon runner going by as Witchy and I headed for the T, before I grabbed the car and headed to Queens (another arm held above crowd shot--note how the guy happened to be turning back toward us. Totally random, and I had no idea until I got home and looked at the pic. You're supposed to be clicking these to enlarge, by the way.): 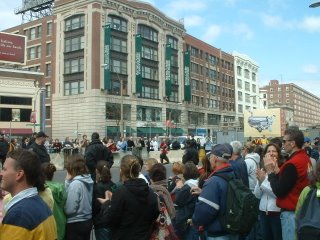 I got to Shea forty minutes before game time. Traffic on 95, but that's about it. About a four hour drive. Here's the special Pedro 200 logo: 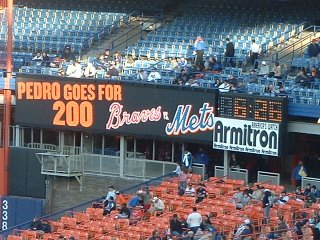 Chan arrived around the second inning, and took this shot of me: 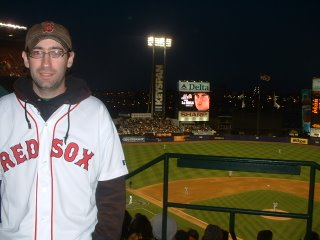 Pedro got his 200th, and waved to the crowd with both hands: 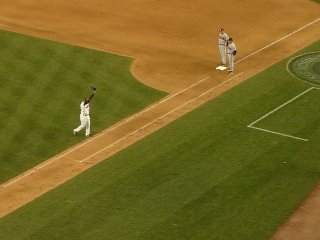 And that's it. The Fenway portion of the day kicked the butt of the Shea portion. Shea made me so miserable, I was ready to leave when Chan got there in the second inning. But we stayed until Pedro left the game, and then took off. Just a mix of not being able to see the batter from my seat because of the grade of the mezzanine and people coming out of the alley non-stop, and the wind, and the fans that made fun of me even though I was rooting for their team. Not to mention the 45-minute wait to get food, only to find out they didn't have what I wanted. Being at that concrete atrocity right after being at Fenway made me realize what a great job our ownership has done with a park that's fifty years older than Shea, but is now light years ahead of it. It also kind of made me realize it's time to let Pedro go. I'm glad I got to see his 200th, but after seeing all those animals rooting for our Pedro, I don't know, I guess he's theirs now. Of course, I decided to go to this game long before I knew it would be a Pedro milestone game, keep in mind. It just kind of made me lose the urge to purposely go over to Shea to see Pedro pitch. Then again, maybe some warm air and better seats will change my mind.

Soon I'll post more pics from today and from Saturday, which I spent at Fenway with Empy, sitting in 12-Eight with Andrew and his dad.

Comments:
And 2 hometeam victories. Good day to do two!

I'm deeply deeply jealous. I caught bits and pieces of the Pedro game from a bar, but had to follow the day game from my computer at work. Also, sweet shot of Papi.

Was this your first Shea trip? I actually ended up there last night too. The warm weather improves it, but make no mistake- Shea Stadium sucks in many, many ways. And so do Met fans, really.

No, been going to Shea since I was 6, back in the days of "Let's make the Mets our "other" favorite team since Steinbrenner gets mad when they win and it's only an hour away as opposed to the 2 1/2 that Fenway is, so we can go on a school night and you can sleep in the car on the way home." (Say that quote in my dad's voice.)

So when I said the thing about warm weather/good seats, I should have said they make it better "like they have in the past for me," to clarify I've been there before. Sorry.

Unless you meant my first Shea trip of the year, in which case, yes, it was.

And thanks, Andrew. Look for the upcoming series: Papi hits ball, Papi rounds bases, Papi reaches plate. Glad I had the digital out of my pocket for that at bat.

I can vouch for Jere attending Shea before. I attended Red Sox vs. Mets with him in 98 or 99. I can't remember one thing about the actual game. I can recall: we had loge level seats but all the way in right field behind the pole; we got there for BP and it was the first time I heard anyone call Trot Nixon "Trotter", said by Jere when he explained who he was to me; Gumby got a BP ball thrown to him by said "Trotter", it was also the last time I parked at the Shea lot since it took longer to get out of the lot than play the game.

Oh my lord, I remember this now. Terrible job by Gumby stealing that ball that was rightfully mine! I remember Trot throwing it toward us, clearly to me since I had a Red Sox shirt on, but the bulkier, taller Gumby got it.

Anyway, thanks for the memories, Casey. I actually looked for you last night, strictly because you're a Mets fan, hence, you could be at any given Mets game. Oh, and sorry I referred to Mets fans as animals. I didn't mean all of them, just the few loud, obnoxious ones that were around me last night. (Especially the ones who said "Braves suck!" to people in Braves gear, but let the yankee fans go unscathed! And the ones who made fun of my Red Sox Pedro jeresy, even though wearing it meant I clearly was rooting for their team.) You non-animal Met fans certainly deserve a new stadium, though.

Love the Blog, check it daily. Just to let you know The New Sox Blog is still going. I was away on a trip, but thanks for the support. Also, I'm wicked jealous of you going to the games.

Jere:
The sightlines in Mezzanine, a place where I had a few partial plans, is mediocre to horrific, depending where you were.

Do NOT confuse REAL METS Fans with the Casual Fan Blohoes, called "New York Fans" & you may have run into a pocket of those idiots.

Mets Security & Promotional Staffs, consider us to be an allied force @ Shea Stadium; it's the yankees fans, that they're not crazy about.

Unfortunately, because The Mets are hot, "The Casual Fan Blohoes" are suddenly coming to Shea Stadium.

Actual Mets Fans ask me where they can order Red Sox Tickets, online.

The Casuals, are more-often than not, yankees fans, whose parents wouldn't let their spawn in The Bronx, or are looking for trouble.

Jere:
I am familiar with where you were. You must have been in the back rows, which are obstructed seats.

The views are horrificly-bad.
& those were Casual Fan Bloho Posers, who razzed you.

I've never had a problem with Shea fans before last night. I'd also never sat in the mezzanine before. The overhang is horrible, and the person in front of me was in the way of the batter unless I basically stood up. I tried leaning out into the aisle, but people were constant coming out of the alley, blocking pitcher and batter.

I had back row Mezzanine behind home for Game 5 vs the Diamondbacks in 99. When the game winning homer left Pratt's bat everyone jumped to their feet, then instantly sat down since we couldn't even see what what Finley was doing in center let alone the ball. We only knew it was gone by the rest of the stadiums reaction at which point in time everyone jumped up again (I also knocked a full beer out of my friends hand and onto a father & son- ironically I had a full beer spilled on me vs. the Cardinals during the NLCS in 2000).

Sorry you got a ribbing at Shea, unfortunately with passionate fans comes stupid idiots who don't know squat and give good fans a bad name. I've worn Met gear to Yankee stadium and only gotten marginal comments at best. However I did see a VERY obnoxious braves fan get absolutely PELTED with concessions (food, soda, beer, etc) in Sept 2000 at Shea. This guy was absolutely pummelled, but he kept standing up and asking for more.

Hopefully the "new Shea" will be as nice as it looks like it will be. At least when you come to see the sox there then the stadium won't dampen the experience.

Jere, regarding you letting Pedro go, I found this on ESPN's Most Valuable Players article. #35 Pedro....."Random overspecific prediction: When his Mets contract terminates at the end of the 2008 season, Pedro will reunite with the Red Sox and become their closer, putting together a couple of Dennis Eckersley-like seasons."

I don't think it's outrageous cause most people don't realize that Pedro stopped being a flamethrower awhile ago. He's a smart pitcher now who knows how to get people out.

I was about halfway up, but eventually we purposely sat in the back row, just to kind of be away from the rest of the crowd, and to see what it was like. (Also, someone had taken our seats after we were away getting food for several innings, and we just decided to let them stay there. Seriously, those food lines were worse than yankee Stadium.) I can't imagine actually having to sit there an entire game, especially if you really care about it.

Yeah, he was kind of losing the speed at the end of his Sox career, but like you said, he's an incredibly smart pitcher. And if he ever wants to come back, of course I would welcome him with open arms. But for now, I'm not going to think about him too much. Or so I'm telling myself.

Unfortunately, Jere, The Mets aren't quite sure on how to handle all of this extra attendance, hence the long concession lines.

My Mets 6 Pack Plan will be in Upper Level, where I have the right to wave to Pilots as they make their approach to La Guardia.

You are right. Shea is a concrete monstrosity. Whereas my 1st Game in Fenway, in RF Grandstand, is an experience which I shall ALWAYS cherish.

Besides, a couple of years ago, I ran into too many Yankee Fans & Casual Fan Blohoes, in Upper Level.

Oh, excuse me; Sorry, but I meant yankee "Fans."