Click to enlarge. And click here for the shorter part one of my Pats' Day dual-city fest. 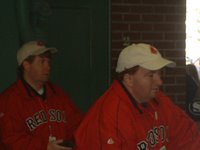 The twins are back in full force for 2006. And as usual, whichever entrance I choose, there they are. 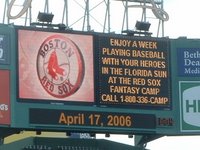 It's rare to see the AM version of the classic Back to the Future time on the Fenway scoreboard. 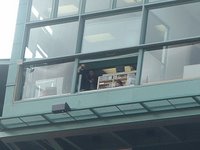 The Fenway cd collection. Please note that not only is the Pixies' song Where Is My Mind? played (as Lenny DiNardo's song) now, but also has a cheesy organ version as well. This is the biggest breakthrough since John Olerud brought Nirvana to Fenway. 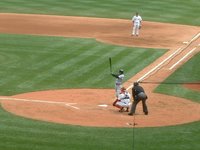 Ichiro from the sweet section 23 seats that Witchy got from Ilele. 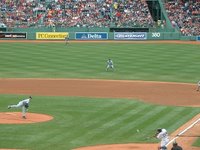 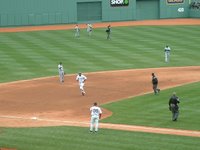 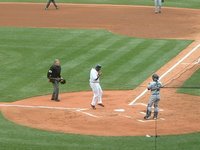 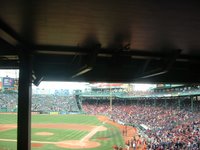 I noticed there's a new ceiling above the home plate area of the grandstand. Probably to cover up all the new support beams. Very disco dance floor-like or Billie Jean video-ish. 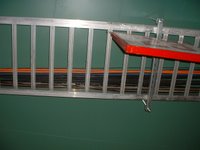 Here's a close-up of the ceiling. With some weird bar things in the way. 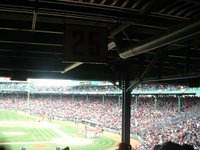 As I've already mentioned, getting a good shot of the final celebration was tough, and I was late on it, what with all the initial jumping up and down. Here's about the best shot I got.

Now I'm back to underneath-style captioning. Here's Shea from the car. 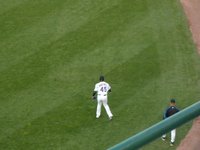 I went out to right field briefly for a closer shot of Pedro. 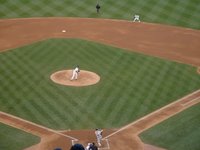 Here's Pedro on the hill. 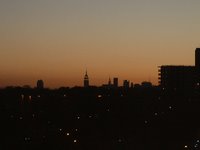 Here's Manhattan looking out the side of Shea. 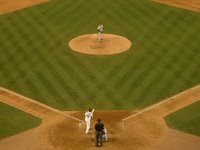 Here's Pedro at the plate. So weird. It kind of looked like he was calling his shot before each pitch. 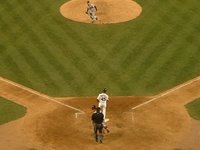 They got him out. 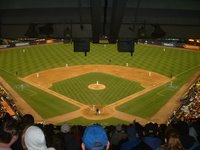 This was taken from the back of the mezzanine. Our view was bad enough, but imagine having to sit through an entire game with this view. Widescreen-style. Our real seats were about ten rows in front of these. The only reason those heads aren't covering the batter is because they're about five rows in front of us. I'm never sitting in the mezzanine again.

I told Chan to videotape the city as we drove in over the Queensboro bridge (24 hours before a bunch of people got stuck up there in the little tram thing). He got some of the usual shots, but none as good as this one from just after we got across the bridge.

Comments:
I once did a two parks in two states in one day thing back when I was in grad school in the late '80's. I drove up from Pittsburgh w/two friends to Chicago in the middle of the night. We got there in the morning, and got tickets to see the Cubs play a day game at Wrigley (Zimmer was managing them at that point, and Schiraldi had just been traded to them). After the Cubs game, we drove up to Milwaukee to watch the Brewers at old County Stadium (underrated old park). Then we drove back and stayed on the Northwestern campus. The next night we went to see the Chisox at old Comiskey. Then we thought about going on to St Louis, but instead went back to Pittsburgh for graduation.

I've sat in back of the Shea mezzanine a couple times....you're right, they're really awful seats.

The Shea Mezzanine is THE Worst place to watch a game. The Shea Upper Level is as high as the last few rows of Tier in Yankee Stadium, which means that you will be waving to pilots on approach to LaGuardia. @ least in Upper Level, there is a slope(A Steep One), which allows for some comfort in viewing the game.

I know of one guy, known in his blog as "The Q", who took in a day game at Shea followed by an evening Minor League Game. The Sightlines at Keyspan Park are considerably better, in Coney Island.