Not Suitable For Young Children

The following pictures may be disturbing to some viewers. Some of the substances shown here are of the unknown variety.

Here's my Red Sox hat as seen from head-on. 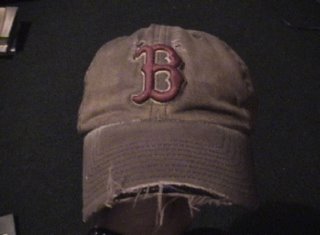 I got it a few years ago. Other Sox hats include: A few I got while very young, with the mesh back, one of which was from the McDonald's near Fenway, which lasted my whole childhood. (As did the McDonald's.) A weird off-white one with a blue brim, with a little Red Sox crest logo, from the early nineties. My only fitted one that I wore in the mid- to late nineties. And of course my Red Sox painters' caps from the eighties. Now back to the current hat. The classic "B": 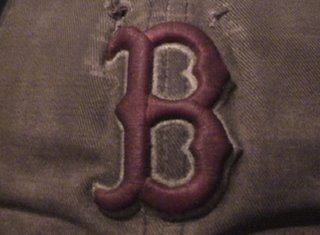 What you'd see if you were standing behind me, and I was sitting down, facing away from you: 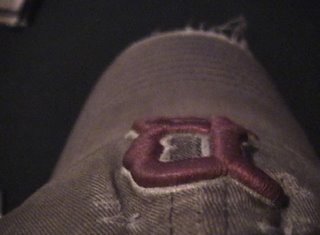 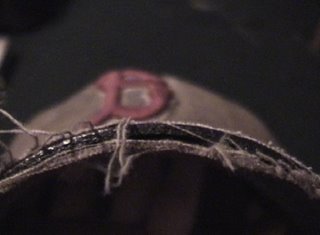 I was always envious of people who had this front portion of their brim in tatters. It never happened to me until this hat. Here it is again from the side: 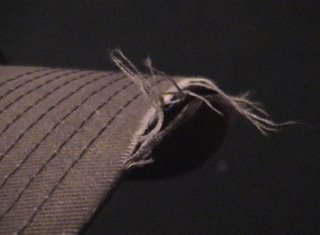 Here's the hat from the left and right sides. You'll notice a white, grimy substance has built up on each side: 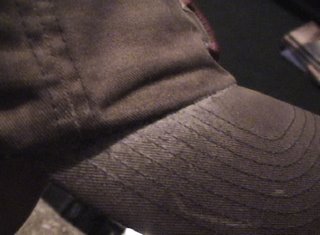 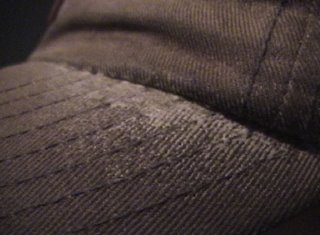 Holes are forming on the back-right and right side panels: 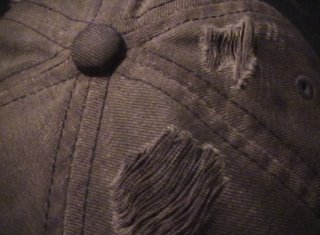 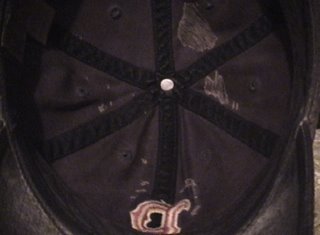 The writing on the tag has mostly rubbed off: 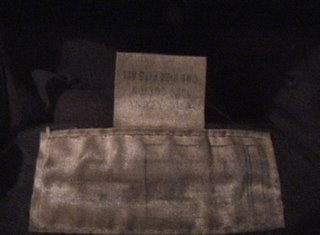 A close-up of the lower of the two smaller "B"'s hidded within the main "B": 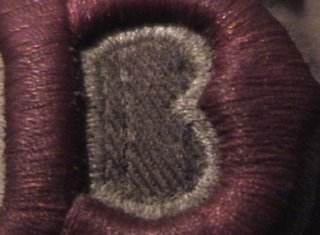 I saved this one for last. The metal fastener thing appears to either be rusting or molding over. (I don't really bother with fitted hats, because my hair changes a lot. If you have hair, and you get a fitted hat, and then you shave your head, suddenly you look like a freak with a huge hat.): 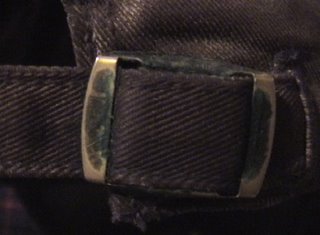 Some people say, "You should wash that thing." I don't understand what that means. Should I put it in a washing machine? I think it would disintegrate.

Comments:
That is a perfect Red Sox hat.

How *do* you get a hat to do that front tatter thing? I have an Irish hat that is seriously the most hideous thing on the planet - three-inch sweatstains on the brim from my landscaping days - but the front rim is in pristine condition.

I don't know. Just the right combination of something and something else, I'm sure. One day a little rip formed, and I was so excited, it was like seeing that first natural rip in the knee of your jeans, or that first crack in the dinosaur egg you've been hiding in your closet on a nest of blankets. And it was all uphill from there.

You just have to focus, I guess.

Actually, one thing does come to mind: Trot Nixon has a lot of work ahead of him to get his cap to look like that.

And I'm so glad to see you bonding with Beth.

Nice hat. As has already been noted, very Trot Nixon like. Impressively filthy. :)

The way you've taken the pictures, it looks as though the hat is some kind of swamp thing, emerging from Lochness. It should come with a warning label - do not taunt - or something.

My goal is to get my Cards hat to this same level of awesomeness.

Haha, nice! Since that one, I went through another, and currently I have two going at once. One was supposed to be the "clean hat" and the other the "sweat hat." Anyway both have gotten sweaty and a rational person might say BOTH are ready for retirement.

Well we all know that most baseball fans are not rational...especially with hats, superstitions, and hitting streaks!