Saturday was Kids' Opening Day at Fenway. It was on one of these such days that I saw Derek Lowe's no-hitter. But usually it's just a day where a lot of cheesy stuff happens. This year, a bunch of mascots crashed the party. I had no idea that the Bruins had a mascot. I has no idea tha Patriots had one, either. To complete the triple crown, I had no idea the Celtics would even think of having a mascot. Let alone a non-furry one called Lucky. I also didn't realize there was an actual Hood milk cow, called Coco. I had heard of the former Red Sox mascots, Lefty and Righty. Here's all of the day's oversized action: 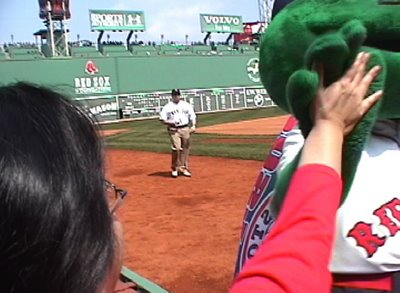 Empy gets a high five from Wally. 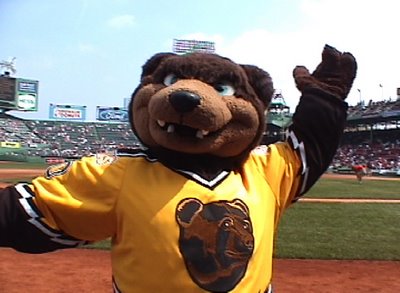 Blades the Bear. I mean Bruin. Do they give it a meaner face for actual hockey games? Or maybe it just doesn't look very mean when striking this very unbearlike pose. 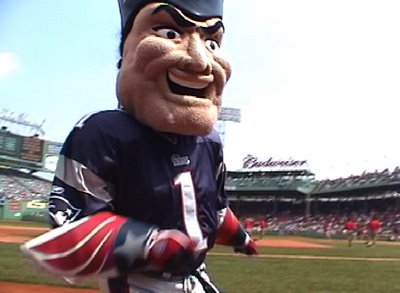 Pat Patriot is about to do a Lambeau-type leap, nearly slamming his big mascot-y butt into my face. 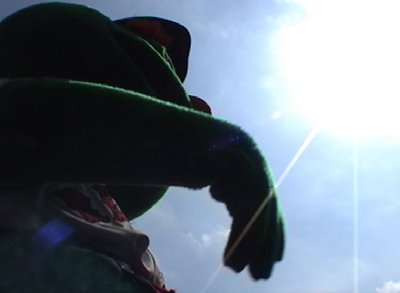 Wally got up on the wall in front of me. 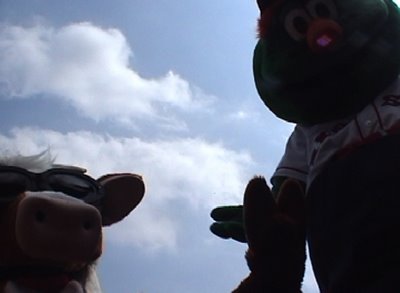 Wally and Coco the Hood Cow. 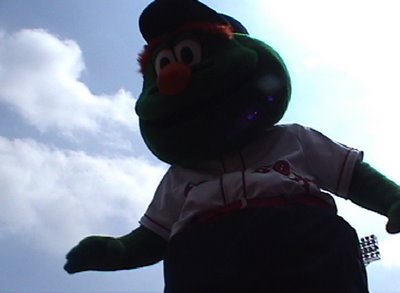 Wally is actually in mid-air here, jumping down from the wall. 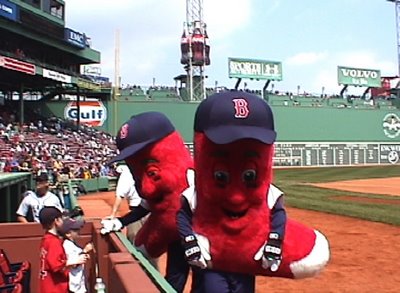 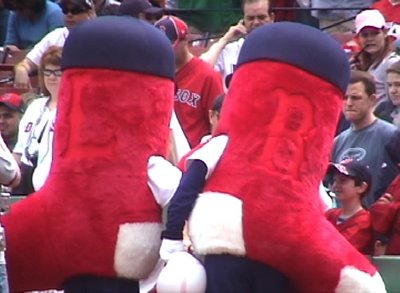 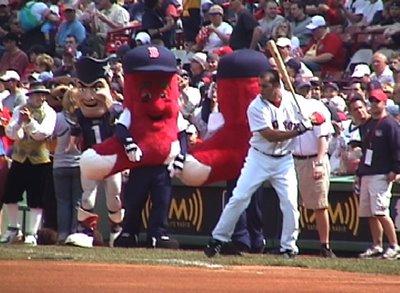 Adam Stern among furry things. I love the way Righty is "looking" at Adam. 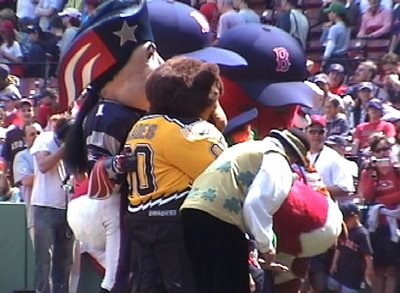 A mass of mascoty, along with the humanoid Lucky the Leprechaun.

Comments:
Lefty and Righty are, to put it nicely, friggin' retarded looking.

Jere's Mom here:
Lefty and Righty were consigned to the attic because of Righty's embarrassing foot fetish. So he conned them into thinking he'd gotten over it. Thanks to the picture, I'd guess the two of them have been banished once again. (Sorry, Lefty,you're judged by who your Siamese twin is.)

Lefty and Righty look like they're from some fever-enduced nightmare. Holy shit, that's terrifying.

The only one I had never seen before was the Bruins mascot.

Lucky is actually pretty cool..one of those acrobat dudes who does flips off trampolines and dunks between quarters.

I absolutely hate the new Wally.

I have to say that Blades the Bear is quite the narcissist, wearing his own picture on his chest.

Lefty & Righty remind me of that old anthropomorphic Sox logo from the 50's:

Yeah, it's like when Joe Elliot would wear the tattered Def Leppard shirt on stage. It's like, Hey guys, why don't we all wear Def Lepppard shirts, in case the crowd forgets who we are in mid-performance!

There's something so funny to me about the expression on mascots' faces. How even when they're "sad," they can't change the expression, only cover their faces with their big hands.

I gave Wally a high five. He gave me a high four.